Why is the MSM Trying to Bury Electoral Reform? 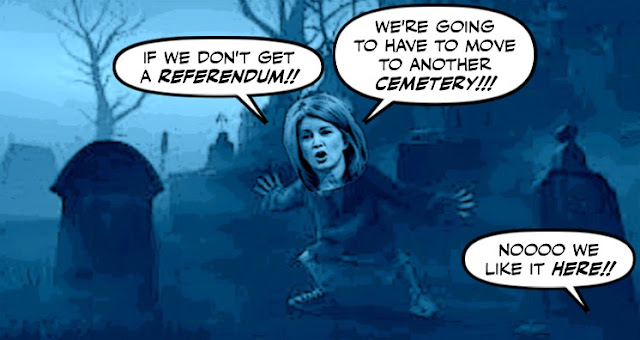 The other day I warned that although the Con's hysterical demands for a referendum on electoral reform, were a product of desperation.

And clearly over the top.

The Con media is on their side beating the same hollow drum.

And sure enough here's the latest example. 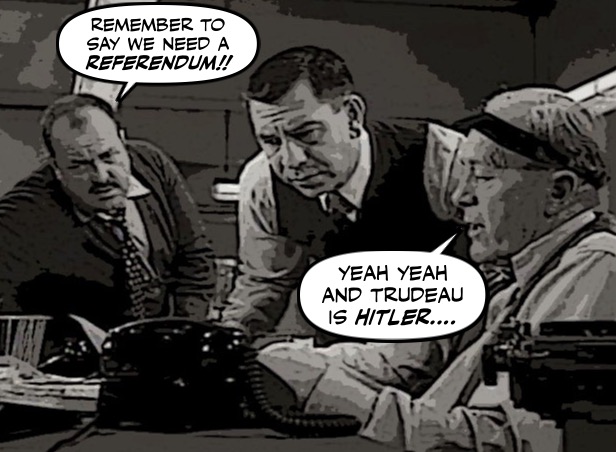 The Globe and Mail editorial board declaring that the first-past-the-post system isn't broken.

Canada’s democratic system is not broken, and the Liberal campaign language, treating our existing electoral system as a kind of cancer, was rash. This country is, relatively speaking, extremely well-governed, and our democracy is healthy and successful. First-past-the-post works.

And that if it is to be changed there must be a referendum.

Fundamentally changing who gets political power, and how, cannot be left up to politicians. It’s an inherent conflict of interest. A change going to the roots of our democracy should only be made with the clear approval of the people, through a referendum.

Even though the FPTP system is horribly flawed. It can produce governments that do not properly represent the views of most Canadians.

And a referendum would almost certainly ensure that the next election would be fought using the same system as the last one.

And while it's easy to dismiss the point of view of the Globe's editorial board, after the way David Walmsley and his idiot gang endorsed the Cons in the last election... 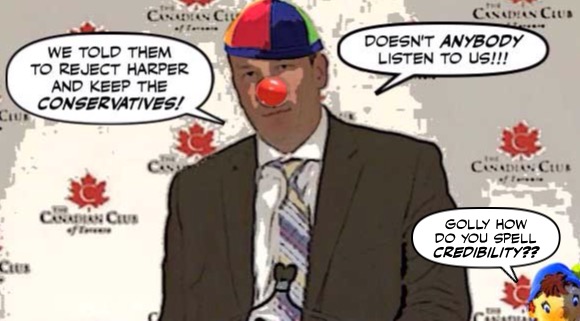 As Rick Salutin pointed out recently, it doesn't explain why so many other journalists also seem so determined to bury electoral reform.

What’s behind these sour responses to a sunnier democratic future? Have journalists learned to cover elections as they now are and don’t want to retool? That’d be mean-spirited to suggest though if the shoe fits, etc.

Or perhaps they see themselves as surrogates for the benighted, politically deprived masses who they stand in for, holding the elites to account since ordinary people can’t, due to the current political math? That’s convoluted but sounds more like it.

Or are journalists embarrassed at having ignored this rotting system for so long? We all should be but they’re the watchdogs who’ve blithely treated a democratic atrocity as if it’s a virtue or at least something normal, like the weather. Anyone would rather not have such dereliction pointed out.

Or why those hapless stooges all seem to be singing from the same songbook... 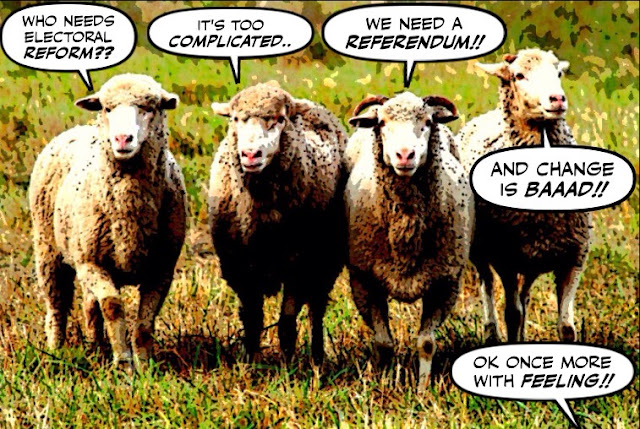 But the worst part is their bleeting chorus is so deafening, that even the Liberals now say that they are willing to keep the FPTP system if that's what Canadians want.

Canadians will get what they want when it comes to electoral reform, even if it's the current first-past-the-post system the Liberals campaigned against, the minister in charge says.

"Look, if an overwhelming majority of Canadians tell us that they want system X, we will deliver on that need and listen to what they've said," Democratic Institutions Minister Maryam Monsef told Chris Hall in an interview on CBC Radio's The House.

Which as I wrote the other day, makes our challenge only too obvious and urgent.

All of us need to help educate Canadians why we need to change our electoral system to make it fairer and more democratic.

For if or when Canadians understand that, they won't want a referendum either.

So we can get rid the antiquated FPTP system.

And bury the hideous Harperite cult once and for all... 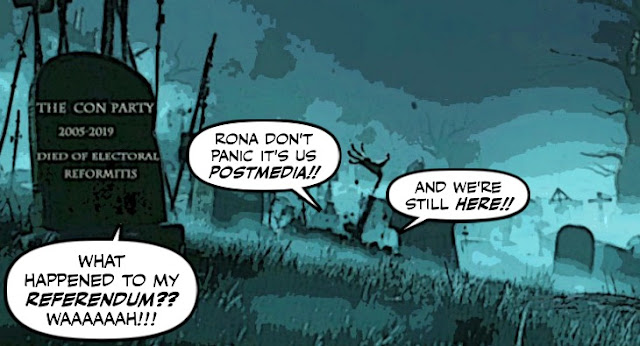 I must admit my first impression on reading a few pieces opposing election reform was simply that the various journalists' masters had spoken.

Given the larger number of columnists that Salutin has listed, maybe it is more than just that. The question is why are all the bleaters going for a referendum. We really are not a referendum country like Switzerland or even like some of the US states.

Perhaps some one got an idea (Paul Godfrey channeling Steven Harper?) and everyone else is running with it so as not to appear to friendly to the government? Monkey see, monkey do?

On the other hand the system is clearly sub-optimal if not completely broken. Aren't the Atlantic provinces all Red? Much of the prairies have been pretty well all Blue for a long time. This is essentially leaving a lot of voters with no-one of their political viewpoint to speak for their regional interests.

I cannot see any reason for a referendum. A piece of the country wanting to succeed, as in the cases of Québec or Scotland, yes, it beats a civil war.

A change in voting procedures decided upon by a duly elected parliament voting on the recommendations of a committee where the government party does not hold a majority seems pretty good to me.

From Wikipedia: The candidate with the most votes in a riding wins a seat in the House of Commons and represents that riding as its Member of Parliament (MP). The Governor General asks the Members of Parliament to form a government, which is normally the party whose candidates have won the most seats; that party's leader generally becomes Prime Minister.

Excuse my ignorance but how is this not fair? The only thing I'm guessing if in a riding let's say a con wins a seat by 2%, a con goes to Ottawa and then all the liberal voters who lost by 2% have no say in Ottawa because only one MP gets to go?

Also, the system the Liberals are proposing, how does it vary? Thanks.

I begin to believe there are folks out there who believe in only a limited amount of democracy - too much of it being a bad thing. A) How else, if not by a referendum does the government find out what most Canadians want (as claimed by Democratic Institutions Minister Maryam Monsef). Are they to go by pressure groups who want mass mailing of petitions to be the measure? It doesn't need to be binding but it should form an amendment to our constitution so that it cannot be changed at the whim of any governing party. B)Your elected MP is supposed to speak for all of his/her constituents. C) There are issues too important to be left to politicians or the SCC. That's why Ontario and BC had votes on their voting changes and it's why Joe Clark had one on Meech. D) The technology of today was not available to hold a simple phone or internet poll, so we are not and should not be bound to yesterday's processes. E) It should not be an "administrative law" change.

too bad the census didn't ask what we prefered

Ranked ballots expresses the voters preferences at the ballot box. A proportional representation system also expresses the voters wishes but the actual government usually consists of a coalition of two or more parties as it is unlikely any single party will obtain over 50% of the popular vote. If all political parties were responsible with the best interest of all their constituents in mind this would be a good thing but unfortunately it can open the door to a significant amount of mischief where special interest agendas are traded off behind a smoke screen of we said/they said with none of them actually representing the wishes of the majority.

If the decision on electoral reform were made tomorrow it is likely the status quo would win as the liberal preference is ranked ballots but unlikely supported by anyone else. The irony is that if the Cons ever realize that it doesn't matter how much lipstick they put on the pig their party is too fragmented to form a majority government in the future they will side with proportional representation. Given their high density and inertia, fortunately this realization will only come after the next election cycle and not at the leadership convention.By then it will be too late to switch sides.
RT

Public consultation, town halls, submitting opinion briefs, and so on and so forth...

If one can't both to participate in any of these things to advocate keeping FPTP, then clearly one does not care enough about the issue one way or the other.

Also: "it doesn't to be binding but it should form an amendment to our Constitution" is a PoV that makes ZERO logical or legal sense given it is inherently contradictory. The Constitution IS binding, therefore it is impossible to pass a non-binding constitutional amendment.

B) I guess that is why so many of them speak of voting their conscience then, eh? Also, I don't see how this point is relevant in the pushing for a referendum argument given that in a referendum, voters (not MPs) are speaking for themselves.

This argument is meaningless in this context.

C) While there are issues MORE important than to be left to politicians, those issues are expressly outlined in our Constitution.

Determining the manner in which we vote, constitutionally, is a matter which has been left to Parliament.

Those who desperately want a referendum on this issue must first amend Canada's Referendum Act in order to allow for it... and since nobody is hinting at having that happen, the CPC's cries for a referendum amount to nothing but empty and hollow crybullying.

A referendum on keeping or ditching FPTP will have little worth in determining how Canadians feel about changing the way we vote if voting in such a referendum isn't mandatory... unless we assume from the outset that all those who didn't bother to cast a vote don't care one way or the other, and thus can be added to the change side's tally, that is.

All a referendum will show us is how the views of those who care enough about the subject (including the rabidly for and opposed) to get off their duffs feel.

E) No matter what you think "should" be, what matters in reality, and in Law, is what "is". Your entire post does not deal in "that which is".

Basically, if this your PoV on the issue of electoral reform, you have no valid point whatsoever to make.

Anyone in that region who didn't vote for the Liberals has exactly 0 representation of its political PoV in the HoC for its region.

Basically, right now, ALL Atlantic Canadians who voted anything but Liberal are essentially living under "taxation with no representation".

How is that fair?

No party has yet proposed a system.

However, our PM appears to personally prefer a ranked ballot system, which has the following benefits:
1. Rather than having to cast your vote in order to first block the candidate or party you most wish not to win, given that you are ranking your choices, you would be to FIRST vote for the candidate or party you most wish to win, as you can rank the one you wish to block dead last. This allows for a more honest reflection of what Canadians want, and

2) Given that a Ranked Ballot system rarely even results in a false majority on the initial ballot (as FPTP often does), the key to winning is to be the 2nd choice of as many voters as possible. That means parties and candidates need to appeal to the broadest cross-section of the electorate as possible by proposing policies that truly are in the best interest of the many rather than the chosen few. It encourages general consensus rather than extremism and fundamentalism.