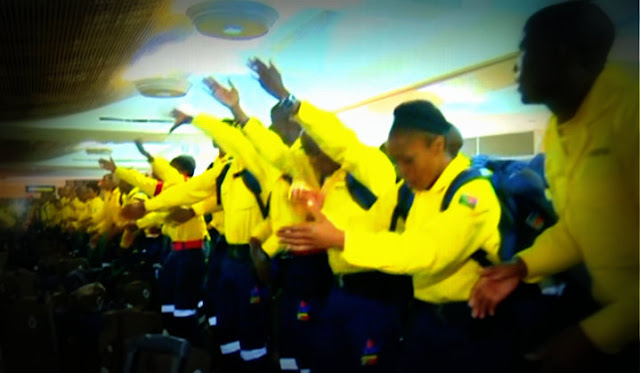 I must admit when I first saw that 300 South African firefighters had arrived to help battle the Fort McMurray wildfire I was a bit shocked.

I wondered didn't we have enough firefighters in this country to finish the job ourselves?

But then I saw them singing and dancing at the airport, and I thought oh never mind.

Who could complain about such a fabulous group of young men and women?

But I didn't realize what a truly great story it was until I learned this. 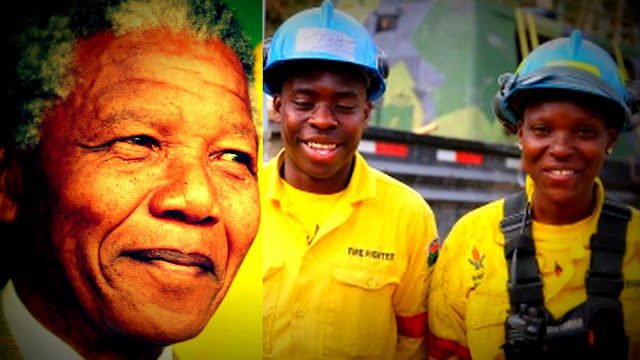 They are the children of my hero Nelson Mandela's South Africa.

And they are also here to thank us for our support in the struggle against apartheid.

“As South Africans we feel indebted to the Canadian people,” a senior South African official said at the departure ceremony. “Remember that these are the people who stood on our side in our times of trouble, so today we are paying back.”

And yes, our support for that struggle is the legacy of Brian Mulroney.

Brian Mulroney read the article in his Montreal office on Monday. “I’m looking at a picture of (Nelson) Mandela and saying, ‘Thank you, Nelson,'” the former prime minister said. “‘We were there for your people, now you’re there for us.’”

Who might have been an old scoundrel, but was Canadian enough to uphold our values.

As prime minister, Mulroney put Canada’s money behind his anti-apartheid rhetoric, imposing economic sanctions against South Africa’s segregationist regime. He was stridently opposed in his efforts by Ronald Reagan and Margaret Thatcher, normally staunch conservative allies on the international stage.

Watching this upstairs in his suite at the Pan Pacific Hotel, Mulroney obviously had had enough of the Brits undermining him as conference host.

“I’m going downstairs in 20 minutes to meet Margaret Thatcher,” he said, “and she’s not going to like what I’m going to tell her.”

Lewis was the only other person in the room for that; he later described it as “a tongue lashing.”

“Now that you’ve hoisted your colours, Margaret, you better look out for me,” Mulroney told her. “You’re on the wrong side of history.”

Which couldn't have been easy... 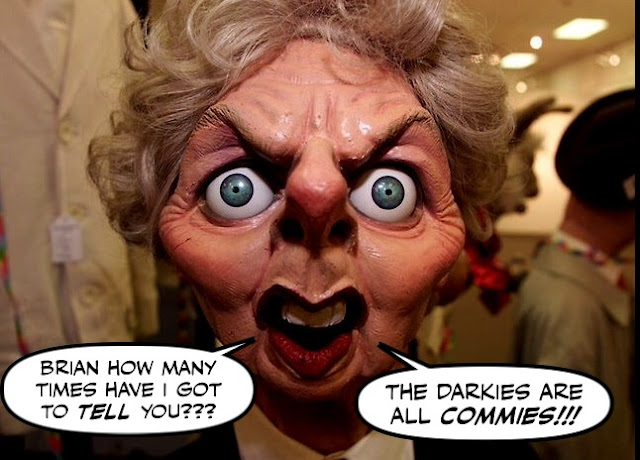 But was the right and Canadian thing to do.

You know, as I've mentioned before few things make me more proud to be a Canadian, than knowing that our soldiers helped liberate the Netherlands... 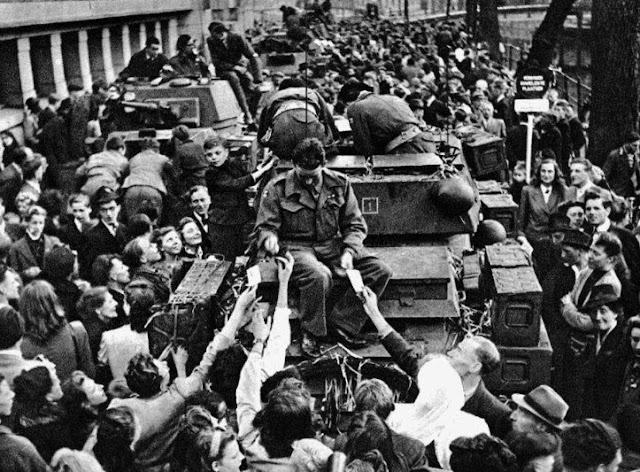 And few things move me more than the 20,000 tulips the Dutch send us every year, to thank us for that, and for sheltering their royal family. 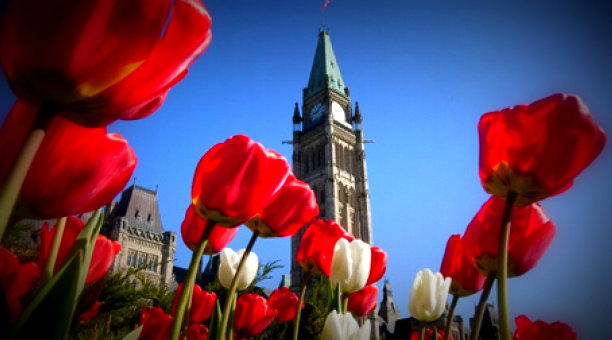 Because it couldn't be a more beautiful present.

Or a more beautiful love story between two countries.

But then so is this one. 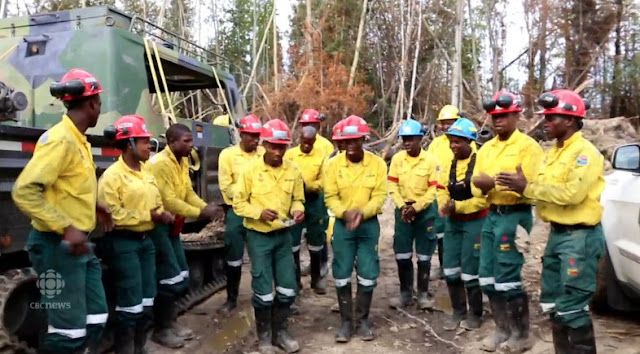 Gosh. Isn't it wonderful what beautiful gifts we receive?

When we do the right thing.

I suspect this never would have happened under the Harper government. Harper's ultra-right Northern Foundation was pro-apartheid, while Tony Clement, then known as Tony Panayi, arranged for the South African ambassador to speak in favour of apartheid at U of T.

I wasn't, and am not a fan of Muldoon, but he got that one right.

Thank you for sharing. I was aware of the Mulroney angle in fight against apartheid, but this story is very special. I guess it gives us an idea of inner battle the CPC is facing between Red Tories and Old Reform.

I am always amazed at how South Africa managed to transition from a white dominated country without going through a phase of total destruction like their neighbors.They were fortunate to have credible leadership that could see the benefits of seeking out win/win solutions versus the win/loose game all Retro-Cons play.Canada and the progressive conservatives helped set the stage for the transition rather than picking sides and encouraging the ultimate destruction that was sure to follow.
RT

Simon you're a good man. I'm an English Con from Montreal, Quebec. I never cared about politics til a few years ago. I think being an alcoholic made me angry and made me hate multiculturalism and immigrants, gays, muslims, anyone who didn't look like me, but deep down inside it wasn't about them it was me, I hated myself. Just blaming my problems on the world. Hate and anger takes a toll on one, and it's a very lonely dark road. I think I'm coming around. Have a good weekend brother.

For someone who was bullied and had severe anxiety problems, who has been thru hell, it's easy to turn con. Because fear leads to anger and anger leads to hate. We need to heal these Cons like myself. Heal!

good to see the South African fire fighters! Yes, the truly good thing Mulroney did should not be forgotten. Guess that is why he was a Progressive Conservative and now we just have Conservatives.

It was really shocking to read a lot of ignorant comments by people questioning why these brave souls came here. Truly disgusting crap. I was told there was an interesting back story to all of this but I hadn't really had time to gather more information given that I am am somewhat involved in this fire situation myself so it was really nice to here to details behind all of this. As someone finding themselves in the middle of this big fiery mess, I can say that appreciate all their hard work and I salute them, truly.

hi anon...no it would never have happened for all you say is true. And let's not forget the Con whose name eludes me right now, who called Mandela a terrorist and refused to stand up and clap when Mandela entered the Commons.

hi rumleyfips...well I wold never have voted for him, but he was a cut above the Harper gang. But he can and should be proud of the way he fought for sanctions to be imposed on the brutish apartheid regime.

hi TS...I was glad to share this story. for although I too was aware of Mulroney's actions against the apartheid regime, I found the details provided by his former speechwriter to be quite fascinating. And I really enjoyed knowing that he gave Thatcher a hard time, for I truly despised that woman, for what she did to the north of England and Scotland, where her name still lives in infamy. And I was thrilled that Mandela, who I absolutely adored for his dignity and the way he led his country to reconciliation, chose our parliament to give his first foreign speech...

hi RT...South Africa's road to reconciliation was indeed an example for the whole world. And I don't think it could have happened without leaders like Mandela and Desmond Tutu. Mandela is one of my greatest heroes because his example taught me to overcome the anger that almost consumed me when I was a teenager and was being attacked by bullies. The way he was able to escape bitterness and the desire for revenge after spending so much of his life in prison, inspired me to try to become a better person. And his memory will live forever in my heart...

hi anon...thank you for this wonderful comment that moved me greatly. I congratulate you for your honesty, and I want you to know that you are not alone. I was an angry sometimes lonely teenager, and I had to fight to control my hatred for some people. But like you I recognized with some help that hate and anger can take a terrible toll, and that life is too short to drown in bitterness. It is a lonely dark road and I'm really happy to hear that you are coming out of the darkness into the light. Good for you my brother.
May it bring great happiness to you and those you love, and those who love you. And you too have a great weekend...

hi anon...wow thank you for another great comment. Both you and the commenter above you really made my day. I despise bullies of all stripes, and can sympathize with the hell you must have been through. I am still working to fight bullying against kids and seniors, and I want you to know that it is possible to heal and move on to a happier life, and that's what I wish for you. All the best my friend, I know you can do it...

hi e.a.f....yes aren't those young firefighters great. They are poor children who have been given a chance to improve their lives, and I must say it's an excellent program and I'm so glad they are here. As for Mulroney, despite his flaws, he was a Progressive Conservative, a thousand times better than Harper and his gang, and he deserves to be recognized for what he did on that front....

hi Way Way Up....I didn't realize that people were making ignorant comments about those young firefighters. Honestly some people are beasts. But I have been thinking about you and I hope that you are coping with that catastrophe, and that everything will be back to normal as soon as possible. As I think I might have told you before, I have been heartened to see how wonderfully many Canadians responded, and I think the tragedy brought out the best in us. And when I saw the video of those firefighters holding up a welcome home sign on an overpass, I'm not ashamed to admit that I had tears in my eyes. All the best to you, and keep me posted on how you are doing...

Both comments were mine and thanks for your support man it's much appreciated. Life is tough sometimes and it's easy to find a scapegoat instead of taking responsibility for one's own problems. Here's to moving forward. I'll post under MC from now on so you know it's me. Thanks again, have an awesome weekend.