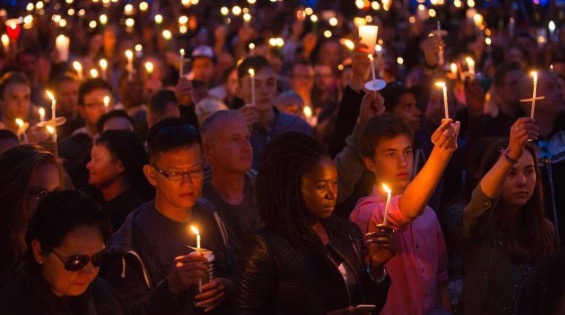 I attended this memorial in Toronto last night to remember the victims of the Orlando massacre.

And although it was a beautiful peaceful event, afterwards I couldn't help but notice the anger of some of the LGBT people who attended.

Anger over the fact that some in the media are trying to downplay the homophobic nature of the attack.

And trying to make it sound it was just an ISIS inspired attack on Western values.

The Star columnist Emma Teitel writes about that here.

Since Sunday’s shooting in Orlando, Florida — the deadliest in U.S. history — far too many people are downplaying the virulent homophobia at the heart of the massacre. The only problem worth discussing and eradicating, they argue, is Islamic terrorism—a threat to us all — not homophobia, a threat to some.

Teitel who is a lesbian, attributes part of the problem to the mistaken belief that homophobia is no longer a major problem in Western societies. When in fact that's just not true even in Canada.

I consider myself among the luckiest gays on earth and I don’t know a single same-sex-attracted person or trans person who has not at some point in his or her life been the target of verbal or physical abuse by a stranger. I don’t know a single gay male couple that shows affection in public when they are not in a hip, progressive downtown neighbourhood — or among friends.

And the way some in the media are echoing that mistaken belief, and downplaying homophobia, is making a lot of LGBT people feel even more threatened, and angry.

And explains why when Owen Jones, a Guardian columnist who is also gay, was confronted with that argument by two right-wing hosts on Rupert Murdoch's Sky television channel on Sunday night, he walked off the set.

And later explained why he did that in this column.

I am reluctant to dwell too much on my appearance on Sky News last night, because this isn’t about me, so let’s just use it as a case study. In sum, I walked off in disgust during a discussion about the massacre: it was an instinctive reaction to an unpleasant and untenable situation. The presenter continually and repeatedly refused to accept that this was an attack on LGBT people. This was an attack “against human beings”, he said, and “the freedom of all people to try to enjoy themselves”. He not only refused to accept it as an attack on LGBT people, but was increasingly agitated that I – as a gay man – would claim it as such.

If a terrorist with a track record of expressing hatred of and disgust at Jewish people had walked into a synagogue and murdered 50 Jewish people, we would rightly describe it as both terrorism and an antisemitic attack. If a Jewish guest on television had tried to describe it as such, it would be disgraceful if they were not only contradicted, but shouted down as they did so. But this is what happened on Sky News with a gay man talking about the mass murder of LGBT people.

And I completely agree with him, there does seem to be a double standard. And the reason I believe the right-wingers are doing that, is because many of them are guilty about their own homophobia.

And as Jones points out, it gets in the way of a more convenient narrative: It's all the fault of those nasty Muslims who are waging war on all of us.

Today, the “we only care about LGBT rights if Muslims are involved” brigade are out in force. As a gay man, I am proud to live in a city represented by a Muslim mayor who has faced death threats for supporting and voting for LGBT people to have the same rights as everybody else. The bigots must not be allowed to hijack this atrocity.

Despite the best efforts of the right-wing media, the gay people and their friends who died in that attack are being remembered all over the world. 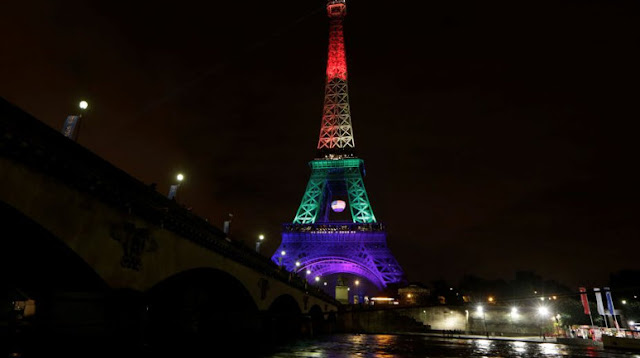 So the message is getting out. It was a terrorist attack, but its homicidal fury was aimed at LGBT people.

Which is good, because to ignore that can only inflict more pain on gay people everywhere, and make them feel that even after a massacre like the one in Orlando, they are still being marginalized. Still being treated as less than human.

And that their tragedy is just being used to attack other vulnerable groups.

Which would be the worst way to remember the dead.

And simply cannot be allowed to happen... 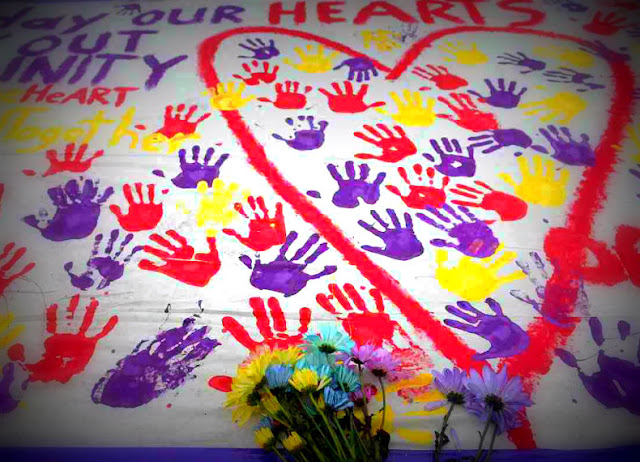 I feel sorry for my right-wing friends. It must be difficult condemning a mass murderer while approving of the outcome. Good thing the shooter was Muslim or their heads would have exploded.

Show this Bible verse to your right-wing Christian friends:

"There is neither Jew nor Gentile, neither slave nor free, nor is there male and female, for you are all one in Christ Jesus." (Galatians 3:28)

I've always felt that "homophobia" is not really an accurate word to describe those who
dislike or hate LGBT people. Phobia means "fear". Who actually fears LGBT people?

The one thing that has come obvious since the 90s. The bigger the homophobe the deeper the closet they're in.

Killers x-wife said that he never mentioned ISIS, but that he hated gay people. That should be pretty clear to those who aren't getting it.

I feel sorry for my left-wing friends. It must be difficult to have fought years and years for multiculturalism and diversity, only to see your pets turn on you.

A strange dichotomy is being constructed here. A horrific atrocity occurs in which the perpetrator (1) is motivated by homophobia AND (2) explicitly justifies his actions by appealling to the single most homophobic ideology on Earth. Yet, there appears to be this urgent need to vehemently insist that these two related elements are somehow mutually exclusive.

All the fundamentalists in all of the religions "of the book", Jew Christian or Muslim and any one of their many offshoot sects, think of homosexuality, adultery, even masturbation to be sins worthy of death, usually by stoning.
Couple any measure of that belief with mental illness,( which seems present anyway with the first condition) and add the almost sacrosanct "right to bear arms" constitutional amendment which allows magnificent,state of the art, automatic weapons to be in the hands of the general citizenry, and you have the recipe for disasters.
Is it the guns or the religious mania?
Jim Jones had a silver tongue and poisoned "CoolAid" to kill his followers or to induce them to kill themselves.
Bombs in aircraft baggage can get rid of many of other faiths in the name of religion and it is done monthly nowadays!
If only we could make handling an automatic weapon, or any firearm or bomb for that matter a sin in all religions, we would make the world a safer place.
Make stoning a sin!

Yeah. I live in the Ottawa 'burbs and though I consider Ottawa pretty...staid, it's relatively safe for LGBTQ. I've seen genders embracing in public and not a blink of an eye. Trans are fairly accepted too, once they let people understand them (i.e. I'm trans, that's what this means, are we cool?) but there are pockets of the country where I wouldn't want to be out because it's still not comfortable. And that's pretty sad.

Safety to you man.

some have tried to change the narrative of the story. Its hatred of LGBTQ people that caused the gun man to go to this club and murder people. He did not go anywhere else but to a night club where he knew who the clientele was. In my mind this isn't about Islamic terroism, its about the hatred in our society of one community. that has to end.

If the LGBTQ weren't so frequently targeted by mainstream society and all sorts of religions, this might not have happened.

Its just hard to understand why people have to hate others because of how they were born and/or who they love.

hi David...well I assure you if I'm in my Karate costume, some bigots would fear me. But yes, gay haters is better...

hi Dan...yes, you're right. It appears the killer might be a self loathing closet queen. As we all know they are the worst...

hi TS...well it's actually worse than the. One moment he was for ISIS, the next he was with Hezbollah its mortal Shia enemies. He obviously has a severe personality disorder, in a addition to being a closet queen, who by attacking others, was really attacking himself. Sad and pathetic...

hi anon...not all Muslims are homophobic, and many are gay. Islam has more than its share of homophobes, but then so do other religions. Which is the main reason I'm an atheist....

hi hinofan...yes, religion is the ghastly ground where hate is incubated. It' so ironic, they all talk of love, and then spread hate in every direction. There are some good religious people, but sadly they are outnumbered, and in the U.S. they are a sewer of bigotry. Even the living saint Pope Francis failed to acknowledge the LGBT victims, and is now no better than all the perfumed bigots who came before him. A tragedy like that one tears the masks off people, and reveals their true colours...

hi Pierre....the sad truth is LGBT people can never feel completely safe. If you're a single person you might blend in, but if you are a couple you might as well paint a target on your back. You never know when some crazy person could attack you for who you are. I am more than capable of defending myself, and yet I feel just as vulnerable. Once somebody threw a full beer can at me out of a passing pickup truck on Church street that narrowly missed my head, and the head of my buddy. Which had it hit one of us might have severely injured us. And it's not like we were walking hand in hand of anything. I don't go to bars because I don't drink, but for most gay people they are or were the only safe spaces, which is why there is so much anger out there...

hi e.a.f...I think that after he had satiated his homicidal rage, he tried to give what he had done some meaning, by phoning 911 to claim he was working for ISIS. He may have been influenced by ISIS videos, but my guess is he was really working for himself...