The Hypocrisy of Ezra Levant and the Limits of Free Speech 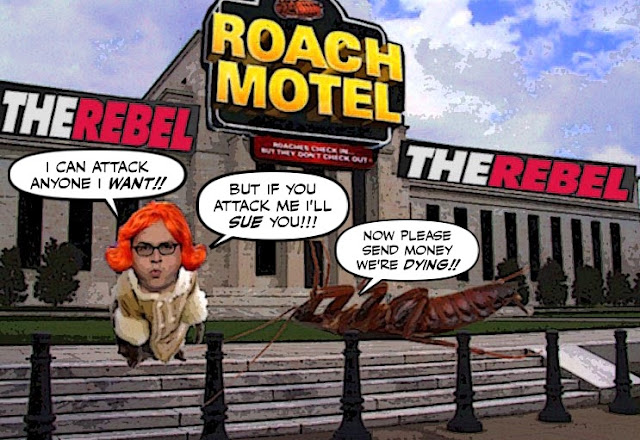 He is Canada's most notorious hate monger, and his ghastly Rebel site is a sewer of bigotry.

But whether he is mocking the death of Jack Layton, or going after the Roma or the Muslims, Ezra Levant would rather call himself Canada's free speech champion.

Even though as it turns out, that couldn't be more farcical.

For in the last week he has sued this Twitter user.

Ezra Levant, the proprietor of upstart news and commentary site Rebel Media, is suing an online antagonist for defamation over a series of tweets that suggested a Rebel-sponsored crowdfunding campaign for Fort McMurray was financially benefiting Mr. Levant.

In a statement of claim filed last week in Ontario’s Superior Court of Justice, Mr. Levant charges that Adam Stirling defamed him by tweeting that the campaign, which sought to raise $100,000 that Rebel would then donate to the Red Cross, could result in a tax writeoff and other benefits for Mr. Levant.

And now he is suing another.

Guess what, kids ... Ezra finally got around to serving *me* with a Statement of Claim. Details to follow.
— CC (@canadiancynic) June 7, 2016


For also apparently questioning why the ghastly bigot would ask his moron readers to send relief money to The Rebel, instead of sending it directly to the Red Cross.

The blogger Dr Dawg has more on the case, and Levant's monumental hypocrisy here.

There are times that Hypocrisy stands on a mountaintop in a howling wind, his cape flapping, his voice thundering across the reaches of space and time, his mighty thews and sinews striking terror and madness in those who merely hold a double standard or two, or fail on occasion to practise what they preach.

“Pussies,” he sneers, as levin flashes overhead, and the ground trembles from sea to sea, and the seas toss their ships, aglow with St. Elmo’s fire, like toothpicks in a tornado. “Look to Ezra Levant, and tremble. You are not worthy even to speak his name.”

And sums up the reasons we should, with this strong statement:

Ezra is a putz, and such creatures can not, must not prevail under any circumstances. His goose must be cooked. His dog must die.

Which is a statement I'm sure most decent Canadians would agree with, especially since it's also a useful warning.

For heaven forbid that any Canadian should think that the Rebel Commander is in the hate mongering business for the money... 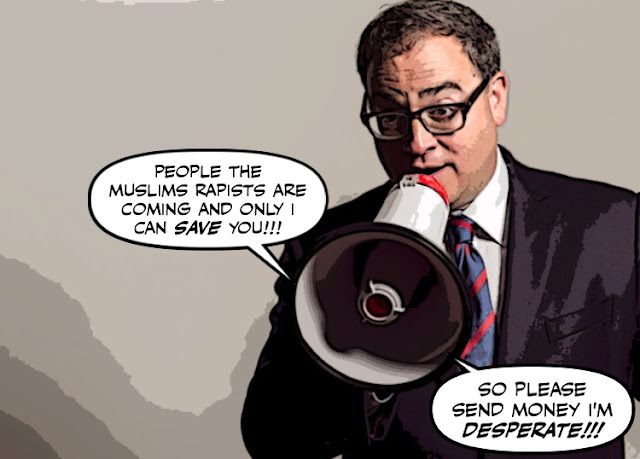 As for me, in the interests of fairness and balance, I'd like to give Levant a chance to tell his side of the story.

But I can't because he's blocked me... Even though I've never fired one solitary tweet in his general direction.

Just a bully, a hypocrite, and a coward...

Hi Simon, Off topic here, but speaking of ghastly sewers of bigotry, did you happen to see this story? Like you I keep abreast of the happenings in Scotland and in particular Edinburgh. What struck me about this were the vile and over-the-top comments attached to it. I went through all 52 of them and could not find anything other than hatred and bigotry. No positives, no challenges, nothing. I've never been to the Edinburgh Mosque proper, but I have eaten at their on site public kitchen many times and have never experienced anything but welcoming individuals who serve quality affordable food. I also find it difficult to imagine who these Scottish thugs are that permeate that comment thread as the friends I know and have in the city are open and progressive people. I did a little research on The Scotsman and learned it was once owned by our own Roy Thomson. Now owned by something called Johnston Press I wonder if it's some sort of right-wing rag that promotes and supports shite in the comment sections of its online news stories. It did take a 'No' stand in the independence referendum so maybe therein lies the answer.

If those rubes are dumb enough to send Ezra irreLevant their money, then so be it. The lunatic fringe get there daily doses of that idiot and their lives are re-invigorated once more. What a hollow, shallow, useless life it must be.
JD

hi Omar...I wouldn't pay too much attention to those commenters. They could come from anywhere, and one seems to be from Pennsylvania. Edinburgh is a progressive city, and those comments don't reflect it's character. Remember that the so-called Brexit referendum has also been stirring up hatred with the UKIP party stirring the flames of bigotry, so that might account for some of those ugly comments. But whenever the UKIP leader Nigel Farage has shown his face in Scotland, he has literally been chased out of it. I'm not saying Scotland is perfect. In Glasgow there are still traces of sectarian ugliness between Catholics and Protestants. But those yobs are slowly fading into the past, and I think the millennial generation will bury the last of them...

hi JD...yes I suppose there should be a place where those bigots can gather, so they don't bother the rest of us. And it is a really pathetic site. It seems to be toning itself down a bit in the hopes of attracting more readers, but it's still too disgusting to do that, so it's caught between the devil and the deep blue sea. It's rowing against the current of history, and it will eventually founder...

I follow The Rebel mostly as a guilty pleasure although anymore I don't know what pleasure I might be getting out of it. At first, I was interested in the thinking on the right and what better place than dive into the belly of the beast? But as time as gone on, it's become so extreme, the people that comment there on a daily basis are absolutely the worst of the worse. They even turn on each other whenever someone has the audacity to offer a reasonable opinion! I cannot believe that the authorities have not investigated some of these people who are advocating violence against politicians they hate or telling people to stock up on ammo and guns for the coming revolution where anyone who steps on their property will face down the barrel of a gun. Of course, my immediate thought is "well why don't you get it started then tough guy?" or "well if you think a bullet hole would look good between Notley's eyes and save Alberta, then why don't you go ahead and martyr yourself for the cause?" But they won't. Just old cowards with big mouths. I know Levant doesn't take himself as seriously as his readers do, he has admitted to being a provocateur and troublemaker, how can they not see the facts right before their eyes? And his readers think we're the blind ones.

I'm not a Twitter user myself, but if I'd be tempted as a Fort Mcmurray fire evacuee myself, to take a stand similar to these two Twitter users and see what would happen.