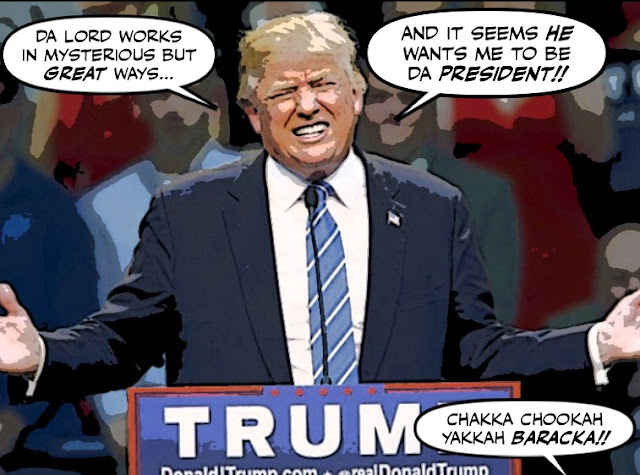 I've always thought that if Donald Trump wasn't running for the presidency of the United States, he might make a good televangelist.

You know, one of the many Con men out there peddling holy water, or in his case Trump steaks and universities, to the faithful.

But it turns out he already has one working for him. 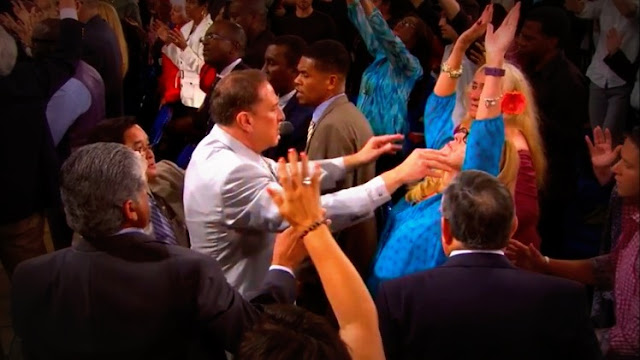 Who claims that God raised up Donald Trump to help pave the way for the Second Coming.

Televangelist Frank Amedia, who leads Touch Heaven Ministries in Ohio, says he was told by God last year that Donald Trump would be the GOP presidential nominee and he believes God "raised up" the real estate mogul to help pave the way for the Second Coming.

"I really was not even thinking about Donald Trump as being a serious candidate," Amedia told Strang of his encounter with God about Trump. "And the Lord spoke very clearly to me, and he said to me, 'This man is going to win the nomination and I want you to be ready to serve my cause when I call you.'"

Amedia, who says he has healed cancer with the power of prayer and stopped a tsunami by appealing to Jesus, said he believes there is "a skirmish going on" in the "heavenlies" right now that "is the beginnings of the preparation of the way of the coming of the Lord."

And who just the other day appeared on the Benny Hinn show, channelling the power of the Almighty to make people keel over.

While talking in tongues...

Now try to imagine Amedia making religious policy for the rest of us. i.e. pray and pay or ELSE.

And God help you if you're a Muslim or a Mexican heathen.

Or even worse, standing behind Trump in the war room, while he prepares to nuke China, or Europe, for some real or imaginary slight... 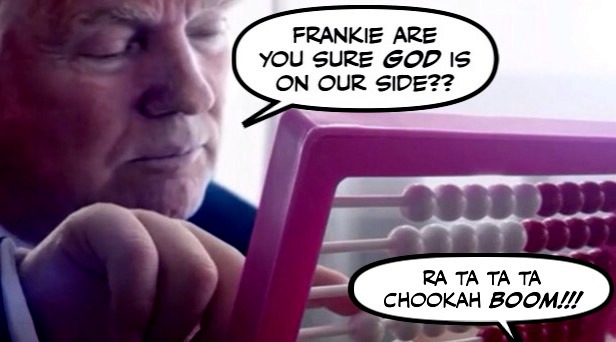 And yes, this is the American nightmare.

And we're right next door.

Pray for deliverance, or better still work like hell to defeat that bigot maniac.

Labels: Donald Trump, Frank Amedia, Only in America, religious crazies, The Race for the White House

This Amedia guy's not as nutty as he seems. He's probably right that Trump is the most likely candidate to bring on Armageddon, but I wouldn't put a neo-con like Hillary too far behind.

How can this be. Cruz, the Alberta oilman and faith healer, told little Teddy that God wanted him to be president. How'd that work out ?

that is too funny. O.K. I know its not supposed to be, but really talk about stupid and ignorant. Its just funny. If there really were a God do you think he'd want Trump as president? Not so much. I'd rather vote for the dog. Its always a good laugh when these people who say their Christians do so much contrary to the 10 commandments.

Trump is just cementing his position with the tongue speaking evangelical crowd and their brethren across the southern US bible belt where approximately 37% of the total US population live. Now that Jesus has approved him,it really doesn't matter what any mortal has to say!
Although there is overlap between groups the sheer number of faithful zombie voters starts to look scary, 50 million disenfranchised white mid to lower working class,100 million evangelists,x million bigots. Given some overlap,and that not all will vote (60%) and not everyone in these groups are zombies,Trump could still have 40 million zombies in his pocket. Assuming only 130 million Americans will cast a ballot Trump doesn't have to capture anywhere near 50% of the remainder to win.Its the good old Harper Con zombie strategy of winning especially if you can maximize the zombie impact by discouraging the youth and minority groups from voting.Relentless attack ads, turmoil,intimidation, confusion all work to keep voters at home. Hilary really has her work cut out for her, that is unless there is some form of divine intervention such as Trump starting to speak in tongues only or Hilary undergoes a miraculous transformation and becomes more than the lesser of two evils.
RT

hi anon...well I don't know, I don't see anyone like him working for Hillary Clinton. So I think we can use him to portray Trump as a Con artist, and as yet another example of his appalling judgement....

hi rumleyfips...good question. Why didn't God help Cruz? And a God who would help a heathen like Trump bring about the Second Coming is not my kind of God. And almost not the God of most Americans...

hi e.a.f...when I see pictures like that I don't know whether to laugh or cry. Although I have to admit when I see Benny Hinn I feel like throwing something at the TV, because I'm always getting robocalls from him inviting me to attend some service in Canada, or send him money. And almost always when I'm sleeping #!@!!!

hi RT...OK now you've convinced me, I'm definitely going to have to put bars on my windows, and we are going to build that zombie-proof wall along the U.S.-Canada border. Seriously though, Bernie and his movement will still be there helping to keep Clinton honest, so will Elizabeth Warren, and the Democratic machine is like a tank compared to Trump's pick-up truck or limo. My guess still is that by the time it's over, Drumpf won't know what hit him...

Hope you are right, if the spin doctors could subliminally flash a small halo around Hilary's head and show her and Bernie holding hands in front of the white house it would be helpful.She sure looks dark and nasty when framed in the Trumpster's ads.
RT

I want to see him work with rattlers like Justified