The Canada Pension Plan and the Cruelty of the Cons 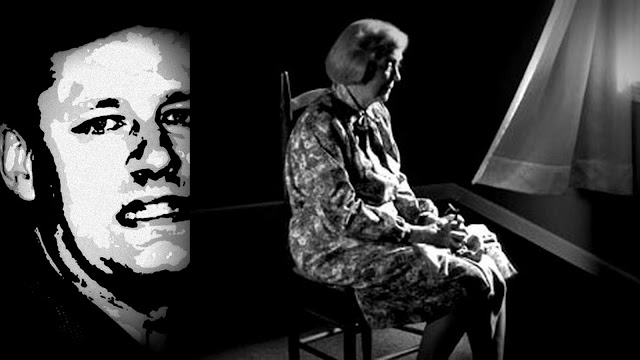 As long as Stephen Harper was in power there was never any hope of enhancing the Canada Pension Plan.

Because he always claimed the economy was too fragile to afford it, he didn't like the idea of pensions, and believed that Canadians should save for their own retirement.

So I'm glad that now that he is gone, the federal government and the provinces will be meeting in Vancouver today to see what can be done to enhance the CPP.

But I'm not surprised that the Harper Party hasn't changed its position. 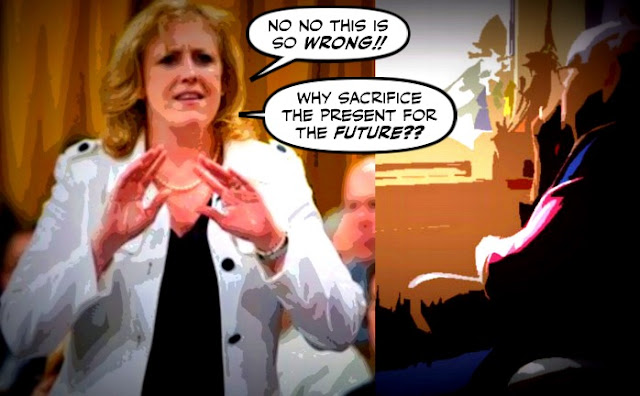 And that the ghastly Lisa Raitt is still singing the same old song.

A hike to Canada Pension Plan contribution rates would be a "drastic step," according to Conservative finance critic Lisa Raitt, who says it's not necessary, as most Canadians are poised to retire with enough money.

"I don't believe that the minister of finance has made a case based on evidence as to why we need to take such a drastic step of increasing everybody's cost across the board in order to get a benefit in the future," Raitt said in an interview with Chris Hall on CBC Radio's The House.

When in fact about 700,000 seniors are presently living in poverty, and as the population ages the problem is only going to get worse. A large percentage of older, working Canadians are heading into retirement without adequate savings to keep them out of poverty, a new study suggests.

“The vast majority of these Canadians retiring without an employer pension plan have totally inadequate retirement savings,” said the report, which was authored by pension consultant Richard Shillington. Among all Canadians ages 55 to 64 without pensions, half have only enough savings to last for one year.

So it isn't a drastic step it's a necessary one. Because if we don't start addressing the problem now, we will face an epidemic of poverty in the future.

And since one of the reasons the problem is getting worse is because companies don't offer pension benefits like they once did... Younger Canadians who are increasingly stuck in low paying jobs without any kind of benefits, will also be helped by enhancing the CPP.

Instead of being condemned to a future of misery and deprivation... So why are the Cons still refusing to accept reality?

Answer: because the Cons are still the Harper Party, and when their depraved leader rejected the idea of enhancing the CPP he did so with a smirk on his face.

Now that we have wiped that smirk off his face... 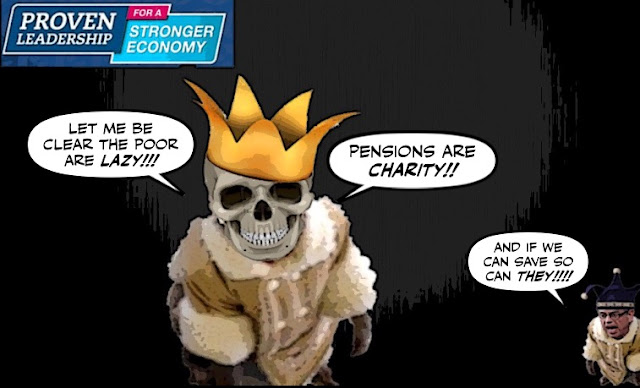 Or replaced it with a frozen grin.

We can finally start working on providing a better future for ALL of us.

Portray the Cons as too cruel to govern.

And bury the monstrous Harper Party once and for all...

104. "Our view is that, you know, we have a strong Canada Pension Plan. And the idea that tax-free savings accounts are simply for the rich is just factually incorrect."

Mitzie Hunter, associate minister of finance, Ontario Retirement Pension Plan: "This [internal Finance Canada] document is further confirmation that Stephen Harper is continuing to bury his head in the sand. CPP is simply not filling the gap. … It's unfortunate that Mr. Harper has really chosen to play politics rather than address serious concerns for retirement security in Canada. TFSAs, which Harper touts as a cure-all, are really untested and they're only really benefiting the wealthiest Canadians."

The Cons wanted to raise the retirement age from 65 to 67. If the Libs had not reversed it, a person born in February 1962 or later would not collect their CPP until they were 67. But Harper didn't care because he was born in 1959 and would still get his full OAP and CPP at age 65.

Hmmmmmm so I must be living in poverty!

Well, we All can't be politicians etc. with big pensions waiting for us when we retire. The next thing to be questioned will be the OAS....old age security....Gone!

Just remember folk: This is the same Lisa Raitt who screeched that Harper left a $6 billion surplus for the Liberals.

I guess Lisa must have found that money, or came to the realization that her lie wasn't having the desired effect. So, let me ask her, "Where is that $6 billion Lisa, did you find it yet?"

As for the pension debate, anyone who stands to benefit from a gold-plated MP pension like she does should have the decency to recuse himself/herself from this debate. To me it is equivalent to telling the masses to "eat cake". She and her Harpercons have no credibility on this issue whatsoever.

I don't think most Canadians are fooled by her nonsense. Of course it makes sense to improve the CPP for Canadians, though I must admit that perhaps MPs and other top one-percenters should probably be excluded from even collecting CPP.
CD

its 6:12 p.m. Vancouver time and they announced on the news, there is agreement on the CPP. NO surprise there.

Raitt and her party were way out to lunch on this one. Even if the aging baby boomers did have enough money to retire on or inherit enough to get through retirement, there is the not so small group called Generation X, Generation Y, The Milleniuls. So, all of them are pretty much employed in places where they don't offer pension plans, the last 2 groups aren't making great wages and so no opportunity to save. The money inherited by the baby boomers will be spent getting the care they need and helping their children the Generation X, Y keeping their heads afloat, putting down payments on homes especially in B.C. and Toronto.

Given the above, CPP needs to be ready in 25 years when Generation X starts to retire, some of them are now 40. The majority don't have adequate savings. If the CPP starts increasing premiums now, the plan may be ready for the coming retirees.

The Cons never were good at the long game. Planning for the retirement of several generations of Canadians has to start 50 to 75 years out. People are living longer. People get divorced more, so less "family savings".

It was funny though to hear Raitt carry on about pensions. Perhaps she would like to give up her solid gold pension plan for the copper one afforded the average Canadian. Na, did think so.

hi David...thanks for that clip. And don't forget how the Cons first rejected a plan for voluntary contributions, and then along with Joe Olive brought that plan back to try to win votes in the last election....

hi David...yes that was another ghastly move by the Cons, to penalize the poor, while he funnelled all kinds of tax cuts and other goodies to his Big Business friends...

hi Kathleen...I'm not sure what the actual figure is these days, but what I do know is that the CPP payments are a pittance, and that poverty kills. I've seen seniors having to choose between their medication or their food and it drives me crazy with anger. A country as rich as this one that can't ensure its seniors a dignified retirement is not my Canada...

hi CD...yes Lisa Raitt has been behaving in a scandalous manner, and I must admit I expected something slightly better from her. Not much but slightly better than the others. But then she has leadership ambitions and I guess she wants to impress the Reformers in the Harper Party, and that's why she now sounds like one of them...

hi e.a.f...yes, I am absolutely delighted to see than an agreement has been reached. As I pointed out in this post it couldn't be more necessary. No serious person could disagree. And yes, as you point out, the sight of those with gold-plated pensions trying to deny a little extra money for the poorest and most vulnerable Canadians is absolutely disgusting....

The Cailleach: Another Blogging Ginger said...

Raitt was quoted recently saying that by the time the Millenials retire there will be some sort of app for pensions, like Uber. Sharing society, and all that. What utter twaddle!

Especially seeing as Raitt was elected by the CONS. She screwed up one of the conservative members, which later quit the party before that happened and went to the liberal party.
That was Garth Turner. I have his book and its very revealing.