Donald Trump: The Fraud and the Con Artist 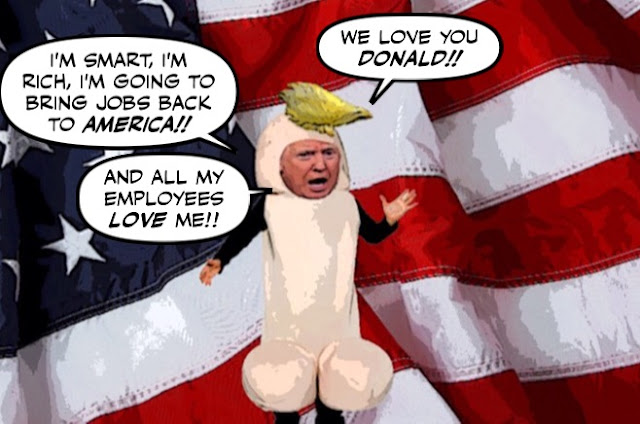 Donald Trump likes to claim that he's a great businessman, who is going to protect American jobs, and that all his employees love him.

He even claims that the Mexican-Americans he is attacking in such a racist manner, will also love him.

Because he's also going to provide them with gazillions of jobs.

But as it turns out, the last thing anyone should do is work for Herr Hair Drumpf. 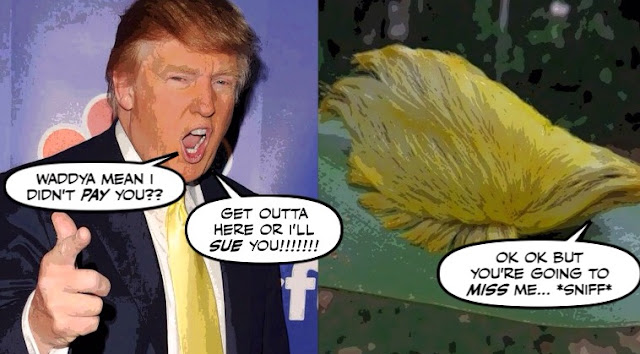 Because he's got a long and sordid record of not paying his employees.

Donald Trump casts himself as a protector of workers and jobs, but a USA TODAY NETWORK investigation found hundreds of people – carpenters, dishwashers, painters, even his own lawyers – who say he didn’t pay them for their work.

The list of the victims he has defrauded just goes on and on and on.

Among them: a dishwasher in Florida. A glass company in New Jersey. A carpet company. A plumber. Painters. Forty-eight waiters. Dozens of bartenders and other hourly workers at his resorts and clubs, coast to coast. Real estate brokers who sold his properties. And, ironically, several law firms that once represented him in these suits and others.

I mean can you believe that? FORTY-EIGHT waiters and his OWN lawyers?

And of course whatever he says, the great champion of the little people couldn't be more cowardly.

“No matter who you are, we're going to protect your job,” Trump said Tuesday. “Because let me tell you, our jobs are being stripped from our country like we're babies.”

But the lawsuits show Trump’s organization wages Goliath vs David legal battles over small amounts of money that are negligible to the billionaire and his executives — but devastating to his much-smaller foes.

And so appalling is his record that one really has to wonder, where did he learn those shady business practices?

Surely not at his own fraudulent Trump University?

But yes, he is a fraud and a Con man.

A racist, a misogynist, and a maniac.

Who must never be allowed to get anywhere near the White House.

For this is the place where he really belongs... 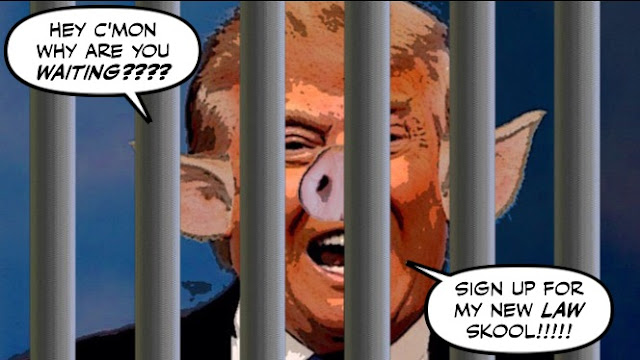 I would find it quite funny that the very people who claim to be the adults-in-charge act like little kids believing in Santa Trump if there were no actual consequences.

The true believers seem to be brain dead no-hopers, but the supporters who have a few neurons firing will slowly run away from this jackass.

The difference between Trump and Hillary is....ones male and ones female. America is doomed....

Listening to NPR last night, interesting possibilities from Sanders/Clinton angle. I think there is some potential for those two to unite. Although it may seem unlikely, i think with Trump being the common enemy, it may just happen. Some times people can come up with interesting solutions when the pressure is high.

I guess we are all hoping...

Hate to say this but after the massacre at a gay club in Orlando, I do agree with Trump the US might want to put a hold on muslim immigration. Come on Simon enough is enough. Now our people are dying and it's only going to get worse.

All of this stuff will increase Trump's popularity with the meatheads. Who hasn't been screwed by a waiter, a painter or a lawyer at some point? The Trumpenproletariat will figure they had it coming, besides they love seeing people get stomped.

Other differences. 1. Hillary is SANE with 2. Decades of experience related to the office she is seeking. HRC has 3. Endured decades of scrutiny by an often misogynist press (cankles anyone) and is still standing. 4. Is a grandmother who recognizes "it takes a village"
Do you really see no difference between a reality show blowhard who dismisses all women he doesn't deem f*ckable and who has built much of his (overestimated) fortune parading young females before a global male gaze like a virtual pimp and a real politician who played with the big boys, got down in the mud but retains the energy and will to slough it off and use her legacy years and the power of the presidency to work for something better?

Yeah and they said there was no difference between Gore and Bush. Look how that turned out. Spare me that Naderism bull. It's not like there is a 'popular' 3rd party candidate out there who is not a loon and/or not a libertarian or not some delusional Hamlet billionaire who thinks he has some pull (I see you Bloomberg.)

Hillary is not a good choice especially with her tendency to swing right and her love of Wall St cash and I hoped Bernie could have pulled it off. However, she is still a better choice than that idiot Trump.

Trump is a class of stupid/sleaze/narcissism all to himself.

That racist, wife beating killer was a born AMERICAN!!!!! How does that relate to immigration? Please do not blame immigration when it was the result of a racist, bigot American. You need to move to Texas!!!!!! Americans are dying mostly due to their own ignorance, followed by the coaching of the equally ignorant, racist, bigot NRA and Con Artist Trump!!!!!!! FP

actually would make a good slogan: Can you trust a man who screwed 48 waiters and his own lawyers out of the money he owed them? Do you think he'll deliver on his job promises?

Dump Trump would work. the man says anything which springs to his mind. Let us hope he is not elected. If he is elected we can expect a lot of Americans to turn up at our borders looking for political asylum.

There is an old quote about, if fascism comes to the U.S.A it will be wrapped up in the flag. Guess that time has come.