The Day The Opposition Losers Decided Not To Punish Justin Trudeau 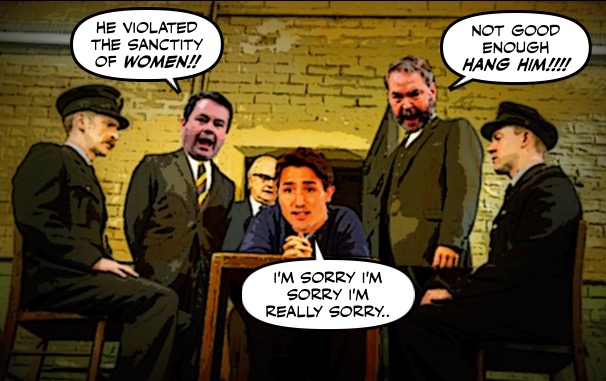 Well I see that after threatening to punish Justin Trudeau for his role in the so-called elbowgate kerfuffle.

And either suspend him or humiliate him.

Or hopefully hang him.

The Cons and the NDP have decided to drop the idea like a hot potato.

Or pour water on the flames. 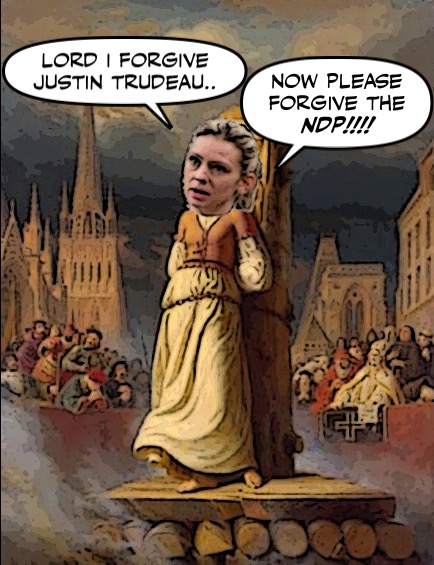 After hearing from the self declared martyr Ruth Ellen Brosseau.

An all-party parliamentary committee has decided not to pursue an investigation of Prime Minister Justin Trudeau for the so-called elbowgate incident that rocked the House of Commons on May 18.

Brosseau wrote that the prime minister's "inappropriate, physical intervention" was not acceptable in any workplace, but she accepts Trudeau's "comprehensive" apology and asked that the committee drop the issue.

And who can be surprised?

When their absurd overreaction to an accidental elbow, only hurt the Cons and just about destroyed the NDP.

For as Tom Clark points out, the Mulcair gang didn't just back down, they sobered up in hurry, and were last seen running for cover.

What was such an outrage only two weeks ago was, by the end of the committee meeting, no biggie.

Cast aside were the thundering accusations of NDP MP Nikki Ashton, that the incident was an attack on women in general, and that no longer could any female MP feel safe from the violent misogyny of the prime minister. 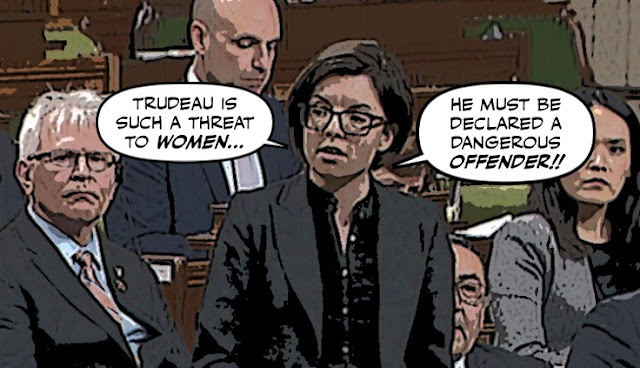 With Nikki Ashton no doubt wishing she could eat her words. Or vomit up her credibility.

And David Christopherson declaring that it was time to move on, for a very good reason.

That would be the same Christopherson who summoned his inner 14-year-old to join a fun game of Red Rover on the floor of the House that precipitated everything that followed.

He and fellow cool kids Tom Mulcair and Ruth Ellen Brosseau formed a human blockade to prevent the Conservative whip Gord Brown from walking up the aisle to begin a vote.

No wonder he doesn’t want it studied anymore. He and his gang might be implicated in a breach of parliamentary privilege.

Having failed to understand that trying to smear a popular Prime Minister would only make him even more popular.

Trudeau remains near his 12 month high on the preferred Prime Minister tracking while Mulcair breaks new 12 month low on this measure. More than one of two Canadians (53.7%) prefer Trudeau as PM while 15.5% prefer Ambrose, 8.2% prefer Mulcair, 3.8% prefer May and 17.8% of Canadians are unsure.

Or worse, failing to understand how many NDP members support Justin Trudeau. 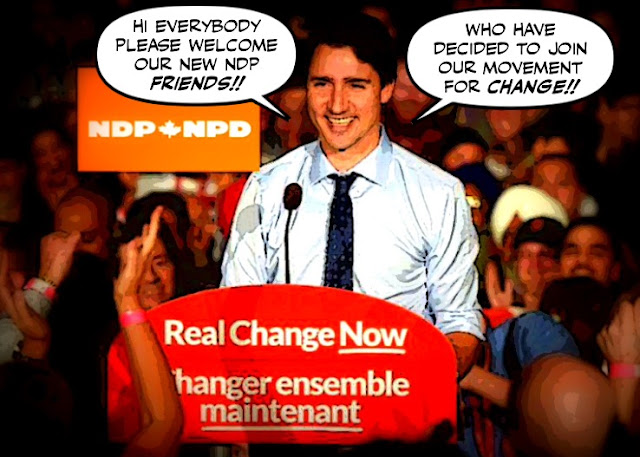 A large part of the public opinion support from the Prime Minister has happened because he has won substantial support among NDP voters. The positive ratings for Mr. Trudeau are 70% or higher on all 12 items tested.

So attacking Justin was always going to backfire.

And you know who I blame.

The angry old right-winger who by attacking Trudeau like the maniac Stephen Harper did... 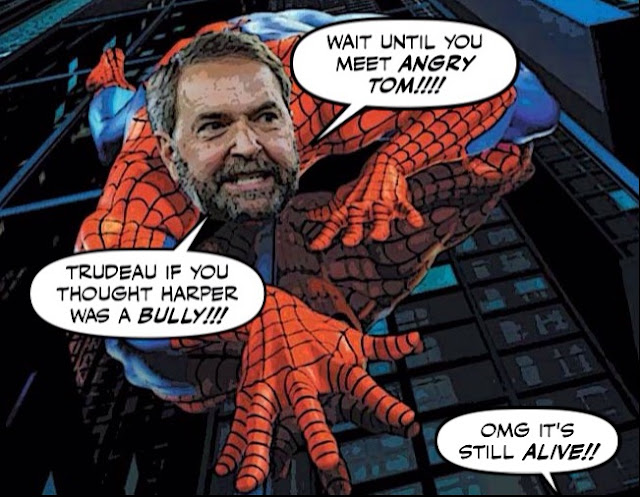 Has only made himself look like a maniac, and is leading his party to absolute disaster.

You know it's too bad that the NDP and the Liberals can't work together like progressive parties should. And as I've always hoped they would.

Because then the Liberals might have been able to help the NDP get rid of Mulcair gently, by making him a Canadian ambassador in some far off country.

But then when I think about it, that probably wouldn't work either... 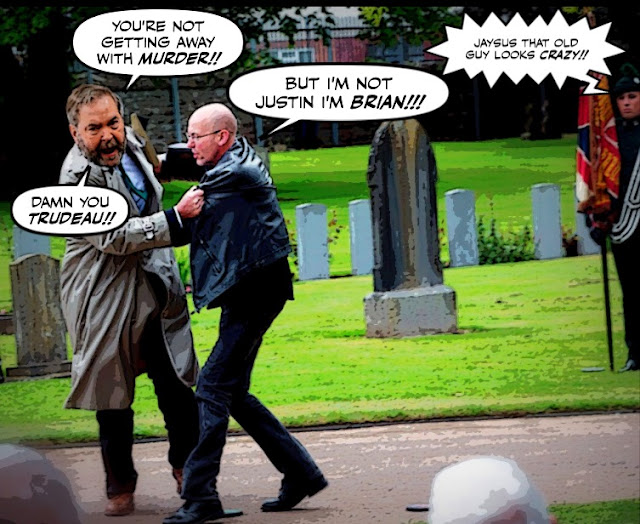 And the sad truth is that like so many other Trudeau haters, he has made a complete fool out of himself.

He doesn't understand his own country, or his own party.

And the NDP will not recover, if it ever does.

Until the day he is finally gone...

As a life long socialist, I've been disappointed with Mulcair's vision on the NDP from the onset of his rise to leadership. I believe most progressive left leaning Canadians expected more from the NDP last election. Instead of progressive, socialistic values, we got Harper-lite from Old Tom. This certainly is not the party of Jack Layton or Ed Broadbent. At first, I felt guilty, because I did strategically vote Liberal in my riding to stop Harper's insane ideological take over of my country, but after watching this latest bit of childish behavior by Mulcair's and crew, I hate to say it, but I may be through with this party, and I believe I'm not alone with this reaction. I would imagine that they will need to sit down before they choose their next leader, and rebrand their image (not unlike the Theo-Cons, but fat chance of that happening) or spend the rest of their time in politics as the 3rd party nobodies. It leaves me to wonder, where's our Bernie?

Mulcair and the NDP lost all credibility over this failed manufactured scandal. It's obvious they along with the harpercons have a rebuilding crisis on their hands.

People all over the country as asking what the difference is between Mulcair and harper when it seems they are ruled by their own anger and hatred for the democratically elected Prime Minister of Canada.

Mulcair an his party's conduct is unbecoming of the NDP. I doubt Jack Layton would have carried on this way.

The last pic made me laugh. Thanks.

"The Parties Who Cried 'Elbow'" will make a nice fable to be told in Poly Sci classes. All this mess does is give the Liberals elbow room the next time they actually stumble. What a really stupid event to piss away credibility on.

Mulcair has got to go, sooner rather than later. Hopefully, the light bulb will go off in his head. It would be far more dignified for him to step aside, appoint a true interim leader, and work behind the scenes to revitalize the party. He can still secure a legacy for himself if he starts to act like a leader who is interested in the survival of the NDP.

How fitting that the one screaming "you're pathetic" turns out to be the most pathetic of all. WWE fans may have fallen for Mulcair's and Brosseau's theatrics but the majority has proven that we are above these antics.
Don't wait Tom, leave now before you completely destroy what's left of the NDP.
JD

I totally agree Anon. Mulcair is a disgrace to the NDP, acting like a child throwing tantrums He simply has to go. No one in their right minds needs a party like Mulcair, the idiot in the house of commons.

Once I saw the slow motion video of the incident, it was all over for me. The carrying on by various NDP MPs was totally unacceptable and I've been an NDPer for over 50 years. (started when I was 12)

The carrying on in the House on this incident is not the Party I started with. Some of the comments by NDP M.P.s was so unworthy of the Party name, I'm sure Tommy Douglas must be turning over in his grave.

If the NDP wants to gain popularity, they need to focus on policy and actions by the federal Liberals and Conservatives. There is all sorts of material out there. The NDP might want to "focus" on the Conservatives because they will have to drop to third place if the NDP is to become the official opposition again.

Elbowing incidents don't get you elected or unelected in this country. Just watch our hockey games. there is all sorts of material to work with, you don't need to make up things or distort them.

I've been with the NDP forever and I am pretty done with this group. They should be pushing the Liberals to more socialist or people-focused items but instead they are acting petulant. Tom...needs to go. He's a Conservative turned NDPer anyway, so he isn't the man.
Pretty sure I am voting Liberal next election for the first time unless the NDP really turns it around policy-wise.

Any comments on what is happening in NL?

hi GreazedLitenen....I've watched Mulcair's career from his days in the National Assembly. And I did enjoy the way he grilled Stephen Harper like a criminal. But his decision to take his party to the right was both insane and unforgivable. Especially at a time when the younger generation is embracing the word socialism.So I could never vote for the NDP again like I voted last time, until Mulcair is gone and the party renews itself. And yes, good question, where is our Bernie?

hi anon...I like to think that Jack Layton would not have acted like Mulcair is acting now. He would have been partisan of course, and he did have his flaws as we all do. But he was more human, and would not have attacked Trudeau in such a vicious manner or tried to make a mountain out of a molehill...

Hi Dan...I'm glad you liked that picture, I rather enjoyed making it. And yes what an absurd way for the NDP to destroy what's left of its credibility. I'm afraid that Mulcair is so angry and bitter he can't think straight. And the rest of them are following him like lemmings over the cliff...

hi TS...I understand he is leaving in 2017 which seems far too late to me. If the NDP is to stand a chance of regaining some of its lost seats it needs a new leader as soon as possible....

hi e.a.f...the NDP seems to be acting as if they were still the Official opposition, and Trudeau was Harper. When they should be playing a more constructive role and working with the Liberals for the good of us all....

hi anon...well I feel like you. I expect the NDP to act like a moral beacon, and behave with dignity. The way they are behaving right now is absolutely appalling. And yes, the man who once praised Margaret Thatcher has shown his true colours, and deserves to get the boot as soon as possible...

Hey nothing wrong with being a WWE fan it's a male soap opera. :)

I think it's fair to say the NDP's move away from the principles of socialism predate the arrival of Tom Mulcair. For me the Mulcair era was just the big ugly cherry atop the already moldy cake.