Michelle Rempel and the Referendum Nightmare 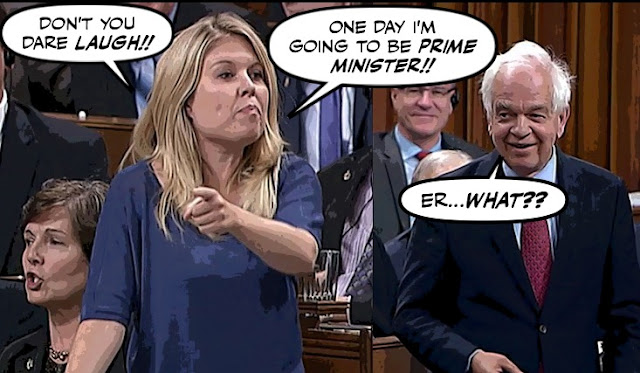 Yesterday I told you that I believed that Michelle Rempel's pathetic hissy fit in the Commons was not just a sign that she's losing her marbles.

But also a sign of her burning but frustrated ambition, at the state of the Harper Party.

Because it's finally starting to sink in that unless the Cons can get a referendum to stop electoral reform, they'll never get back to power.

And she'll never be the leader of the Harper Party. 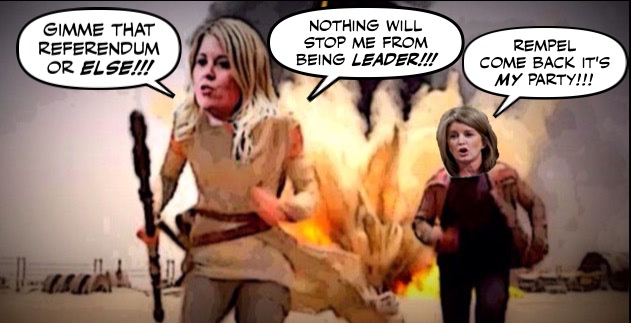 Even though as you know, she's sooooo ready.

And the reason the Cons aren't going to get their referendum is not just because it would be illegal.

But also because it's the last thing Canadians need after the darkness of the Harper years.

It would be a living nightmare. It would divide us again, and pit Canadians against Canadians as that depraved leader liked to do, for crass political purposes. 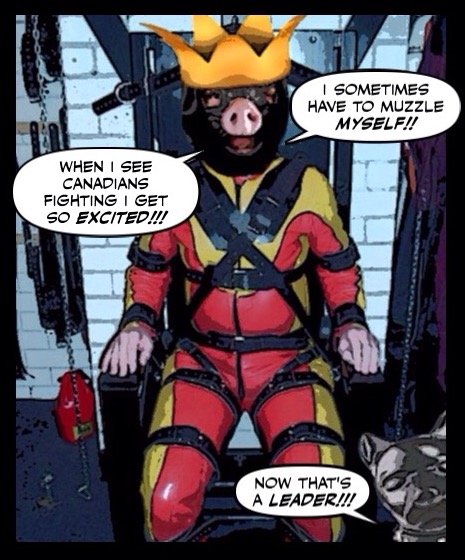 Or just to pleasure himself.

And as Chantal Hébert points out, holding a referendum would also open a can of worms because we don't even have a proper referendum law.

Canada’s current referendum law was conceived in haste, in the heat of a losing constitutional battle almost 25 years ago. It was not designed to bring plebiscites into the electoral culture of the country. So many of its key sections are obsolete that it would have to be rewritten before Canada could have another nation-wide referendum.

It's out of date, it needs to be rewritten. Right now it would favour the Cons with their big piggy pockets.

In 1992, Canada’s political system still tapped the rich vein of corporate Canada for money. In the Charlottetown referendum campaign, the big banks and the pharmaceutical industry gave big bucks to the Yes camp. Such contributions have since been banned from the federal system. The referendum law is irremediably out-of-synch with 2016 political financing practices.

And their bought media... 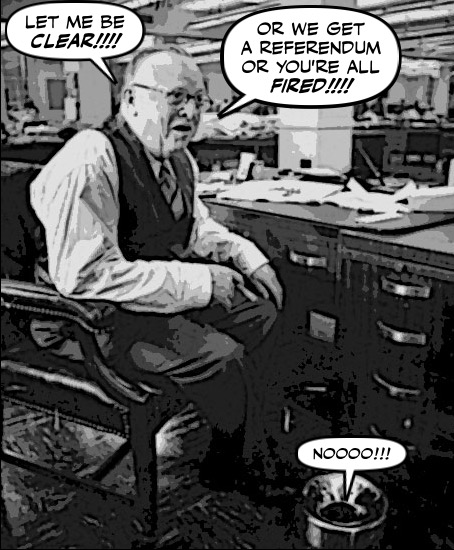 And what will the Cons and their media stooges decide what constitutes a clear mandate for electoral reform?

... 25 years ago, there was no debate as to what constituted a “clear” referendum mandate. Fifty per cent plus one was the accepted figure. That changed after the 1995 Quebec referendum and a Supreme Court reference that suggested the threshold should be higher. Today, there is no consensus among the federal parties as to what constitutes a “clear” majority. The Liberals, under Trudeau, have consistently maintained that it is more than 50 per cent plus one.

Because just that argument alone could consume a massive amount of time and energy, that could be better spent educating Canadians about the need for electoral reform, and the different choices available.

But then as Hébert also points out, the main reason the Cons are beating the referendum drum so feverishly, is because they hope the prospect of that living nightmare will make Justin Trudeau abandon his plans to change the way we vote. 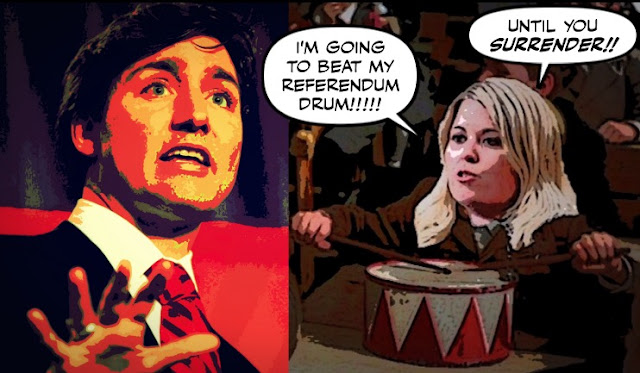 The Conservatives believe the first-past-the-post system serves their party best. In the face of overwhelming popular pressure for a referendum, they figure Trudeau would abandon his bid to change the voting system rather than put it to a pan-Canadian vote. They may well be right. The option of a national referendum is a can of worms that any moderately sane government would think twice before opening.

And that's our challenge. To keep up the pressure for electoral reform, by creating a giant movement for change, that can educate Canadians, and counter the Con media's propaganda.

So we can portray the Con demands for a referendum as just another attempt to divide us, by the same old Harper Party... 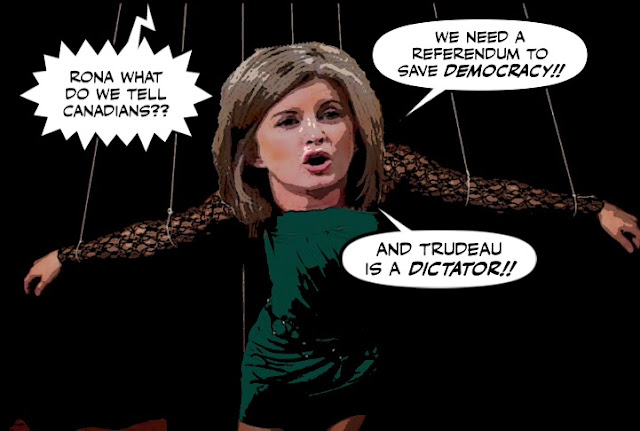 And just a last ditch attempt to save themselves, by burying electoral reform.

You know, when I think of that desperate plan to bury our hopes for change, I can't help thinking about this story.

Or believing that giant sinkhole in the heart of Ottawa is a sign from above.

That tells us where the Cons are going.

Down down into the pit of despair... 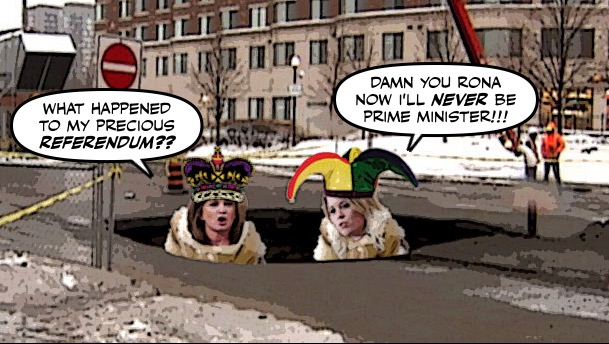 Until the day we deploy electoral reform.

And we finally bury them forever...

That morally depleted group of CONS is an embarrassment to Canada and democracy!!!!! Throw all these ignorant arses in the sink hole. FP

Well Simon, I suppose the sinkhole affords us an opportunity to literally examine the seamy underbelly of Ottawa.
I am looking forward to the ethics commissioner reopened inquiry into Nigel Wright's personal cheque cutting.
But most of all I am looking for the inquiry into that hideous Con government proroguing affair.
The horror of War Crimes committed by CANADA being discovered!!
The coverup of the Afghan Detainee Affair.
Some eminent groups are calling for an official inquiry.
http://www.aljazeera.com/news/2016/06/canada-urged-probe-role-afghan-detainee-torture-160609160734114.html
Canada makes better peacekeepers than warriors Simon.
Remember Somalia, Remember Afghanistan.

Stephane Dion's P3 model is the perfect compromise. It's 5-member STV with a simplified ballot that can let a person vote for a party instead of ranking candidates (but they can rank different candidates from different parties if they want.)

Dion is a prominent Liberal and Fair Vote Canada member. His system is promoted on the FVC website. It bridges the gap.

What this means is that it can be presented as a PR compromise, when, in fact, it's not a compromise at all. Since the Liberals are said to favor preferential ballots (AV,) they can be pressured into compromising with Dion's P3 model.

In short, P3 a PR Trojan horse. Time to roll this baby into the establishment fortress and take our country back!

Thanks for the references to the Fair Vote Canada web site and from there to Stephan Dion's P3 proposal. At first glance his proposal seems to address the several downside issues I have with European style proportional representation where majority governments become a thing of the past, the major parties are weakened overtime and others spring up for the sole purpose of forming coalitions that allows the tail to wag the dog to the benefit of the special interest groups and hidden agendas.
RT

Dunno. I think the German electoral system is best: single member ridings with a variable number of non-riding members to give proportionality. You vote for two things: a candidate and a party. The non-riding members can come from a party list or, better, come from their candidates that got most votes but lost to another party's candidate in their riding.