The Con Brexiteers and the Road to Ruin 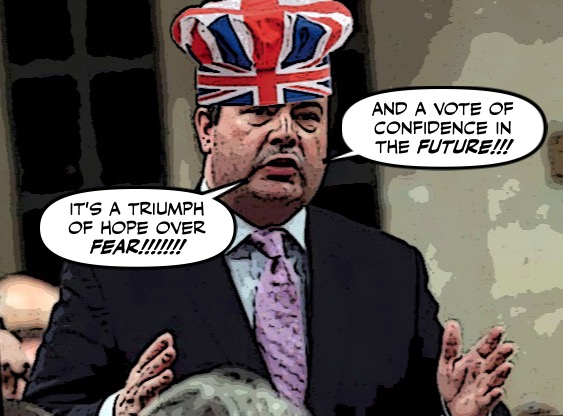 Ever since Jason Kenney tweeted out his enthusiastic support for the Brexit referendum result, he has been widely ridiculed.

Especially since the Brexiteer's bubble burst.

European leaders have insisted they will set the terms of the EU’s split from Britain, rejecting suggestions by British Prime Minister David Cameron that informal discussions can take place.

The future is looking grim, and it's getting hard to tell who is more confused Boris Johnson or Nigel Farage. 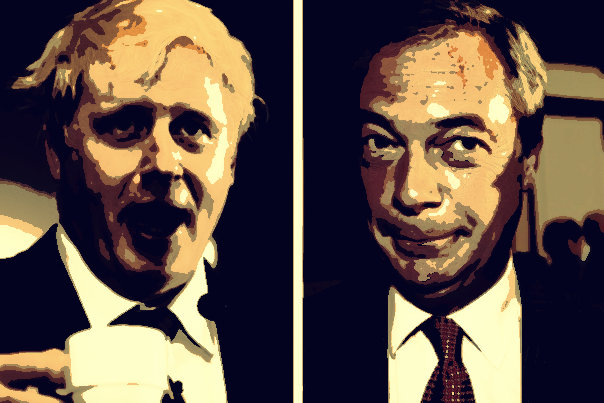 Who as we now know didn't have a plan.

With their giddy celebrations of “independence day” having given way to political and economic turmoil, one thing has become especially clear about the former London mayor Boris Johnson and other leaders of the successful campaign to vote Britain out of the European Union: They had no plan for what comes next. 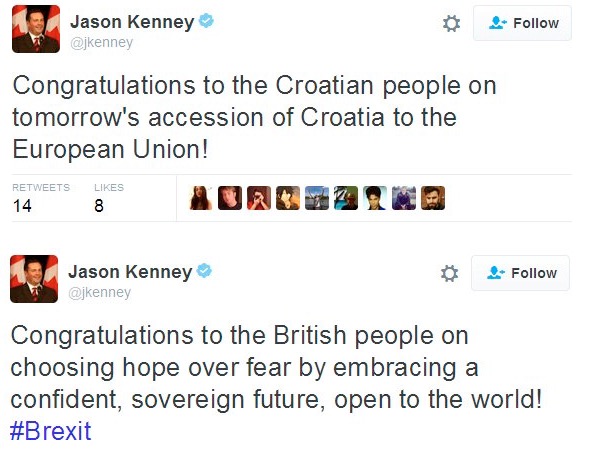 Who seems to believe that what's good for Croatia, isn't good for Britain.

But then of course he's not the only Con Brexiteer, so is Tony Clement... 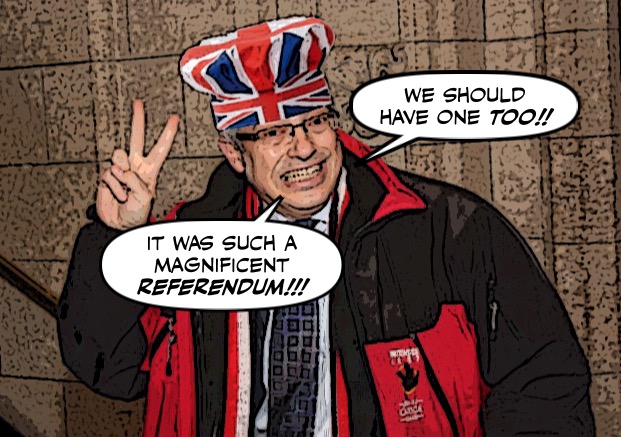 And playing cheap politics, as only he could.

Even as Britain is engulfed by a tidal wave of racism,

And now even the Con friendly Tim Powers has had to admit that watching Kenney and Clement is a painful spectacle.

Watching some Canadian Conservative party “would-be” leadership candidates prostrate themselves to be on the winning side of the post-Brexit-vote debate has been painful. How are these possible candidates—supposedly avowed free-traders, and members of the cabinet that pushed to finish the Canada-Europe trade agreement—now Brexiters?

Has had to remind Kenney that it was the triumph of fear over hope.

Arguably it was fear and frustration that propelled the Leave side to victory: a fear of never returning to a romantically conceived Churchill-era United Kingdom because of faceless bureaucrats in Brussels and London who were letting the British bulldog morph into something unrecognizable. Never mind the jokes that write themselves about a former senior Harper minister talking about hope overcoming fear.

Remind Clement that nobody is calling Brexit magnificent.

So far, I have yet to see anyone in Britain from either side describe the vote process, the debates, and the aftermath as “magnificent.” In fact, Boris Johnson, a leader of the Leave forces and possible successor to David Cameron, has acknowledged the tumult and emotional hangover of his winning results. If Johnson can recognize triumphalism isn’t the way forward at the moment, perhaps some of our MPs could do the same.

And of course wonder why both Kenney and Clement are pandering to the angry rabble.

What is most disturbing about the Clement and Kenney posturing is they seem to be playing to voices of the discontented and embittered. They both know better. Is biting low-hanging fruit of the pissed off the best way to look at leading and rebuilding the Conservative Party of Canada?

And why since young voters in the UK are so strongly against Brexit... 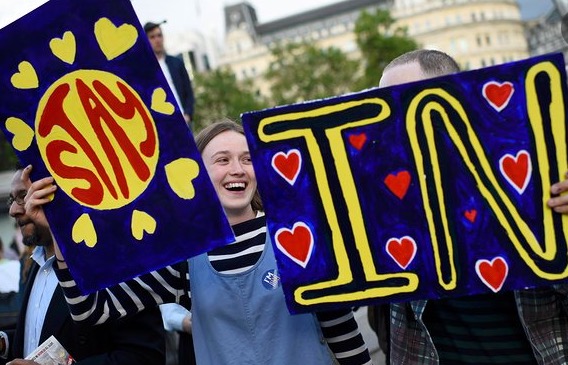 Are those two Con clowns taking their party in the wrong direction?

Clement and Kenney in their approach to Brexit appear to be looking backwards not forwards. If future generations can see the value of an intermingled world with more opportunities for all, leadership candidates should take heed. Justin Trudeau won the 2015 general election because he engaged those who share that view. While pumping out a chorus of “Rule, Britannia!” might seem hip to some Conservative leadership candidates, it is entirely retrograde.

And although some questions have no obvious answers, I think it's safe to say this:

Like the Cons in Britain, our Cons are also in a total state of confusion.

Tony Clement is out of his depth.

Jason Kenney has never looked and sounded so ridiculous... 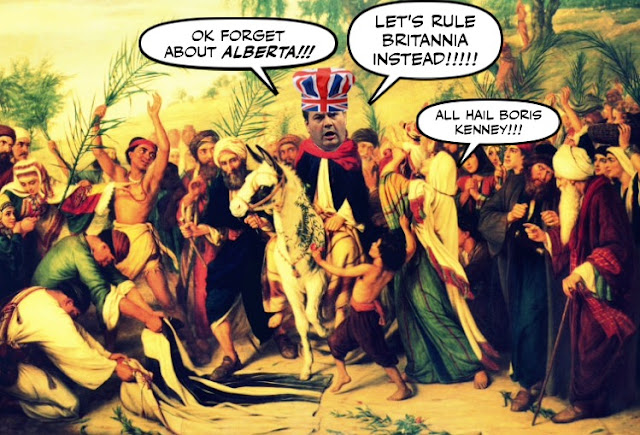 They are all making it up as they go along.

And they are all heading for oblivion...

dear mr. kenney,
i am delighted at your bid for alberta politics and, like you, i am disappointed that the official obstruction party must now be on self-destruct without you. nevertheless, should you feel that the train has left, unfairly, without you, fret no more - our local giant tiger is looking for a casher. you could be useful, yet.
respectfully, luceforma

Simon, I did not even know that Tony (gazebo) Clement was still relevant!!! Anything Gazebo Tony says rings in his ears only. I can't imagine anyone other than a few CONS in the Huntsville area listening. As for "bachelor" Jason Kenny, stop picking on him, he just wants to cover all the bases. This is why he has not opened his own closet door yet. This Boris UK plan is like selling your house but not making arrangements in advance to find other lodging on closing the sale. Not much common sense with these CONS. I thought this CON disease was just a North American thing but I see this morally depleted, ignorant, racist, bigot, infection is traveling the world. While I may not be impressed with the lack of promises fulfilled by the Trudeau government to date, I am so happy the CONS in Canada can bark and bark but will never be in power again. Who listens to Kenny anyway, Alberta? ha ha Happy Canada Day Simon. FS

Well, Boris is gone, either fleeing in panic or stabbed in the back by his buddy Gove. It's hard to believe but I think even the Cons here were a bit more competent. This is not to suggest that I think they were competent, just not quite as incompetent as the Brit Cons.

I am not sure that anyone with sense would want to be leader of the BritCons at the moment. Hated by the Remain side for wreaking the country and soon to be despised by he Leave side for lies, incompetence and complete failure to deliver on any of the Leave promises (See 350 million pounds for the NHS). I suppose the only good thing may be that this likely means the end of the BritCons for decades.

On the other hand, Nigel Farage and UKIP may mean that Canada is going to be accepting English refugees as well as Syrians. (I originally thought of that as a joke but on a few moments reflection am rather more serious.)

hi Luce...I find myself having to restrain myself from writing a post every day about Kenney. Because he's in such a frenzy if he hadn't sworn obedience to his chastity vows I would swear he was in heat. My guess is he has seen the writing on the wall and knows it is now or never. My yes is never, but his flame out should be spectacular, and incredibly entertaining....

hi FS...well Tony Gazebo is irrelevant, his chances of winning are negligible. But somehow he has fooled himself into believing that he has a chance. He's been talking about adopting some more progressive policies to try to appeal to the so-called Red Tories, while at the same time trying to feed red meat to the Reformers. My guess is that he will satisfy neither group, and end up like the meat in the sandwich...

hi JRK...yes it's practically Shakespearian. Boris betrayed his school buddy Cameron, and has now been knifed in the back by Gove, by jove. And he's worse than Boris and Cameron. Even my Mum who doesn't much care for any politicians, hates him more than the others. I hope this means the end of the BritCons, but unfortunately the Labour Party is waging war on itself, and if an early election is called UKIP could be the big winner. Which needless to say would recreate what is happening in France and other places, and would be absolutely disastrous. And yes, the only positive thing is that I understand application for Brits to move to Canada, have quadrupled in recent days. And since they will be all progressive refugees, I'll be happy to go down to the airport with tea and scones and welcome them all to Canada... ;)

And then there's Rex Murphy in the National Post, crying about those awful liberals. It's been a difficult few years for conservatives.It's not getting any better. In the States, Obama continues to progress his country into the 21st century. A Scalia-less Supreme court continues to overturn the right's policies of discrimination and hate. In Canada, Trudeau has given his country a glimmer of hope, can-do attitude and a visibility on the world's stage that for too long has been dimming. In response, conservatives have been hurting, unfamiliar with this new world that no longer caters to their superstitions and paranoia. It's driving the right wing insane. Trumpster diving has become an American sport. Brexit became not about independence but a scalding souflee of anti-immigrant, anti-new world, ant-change resentment. You can feel the sense of panic most vividly in the media. Right wingers like Murphy are whining with a loud, lonely wail about how mean liberals are to conservatives. It's a piercing cry, uttered by those with the most to lose in this new world of freedoms and adventure: "Why are those iberals saying such mean things about us. They're hurting our feelings. I wish there were no liberals. They just get in the way of all I've been told by my parents, teachers and preachers." Murphy and Harper represent the worst of conservatives - those bawling children who want everything their way and if they can't get it, they will shame the media and everyone else into promoting their values. Sorry Rex, that dynamic no longer works. Your long-wailing whine is falling on deaf ears - only the flat earth society is listening any more. Dry your eyes conservatives, the world is changing and change is our only constant. You are being left behind and the world can no longer halt time for your edification. Rex, you are a dinonsaur. Sorry about your fate.