Can Scotland Really Stop Britain From Quitting the EU? 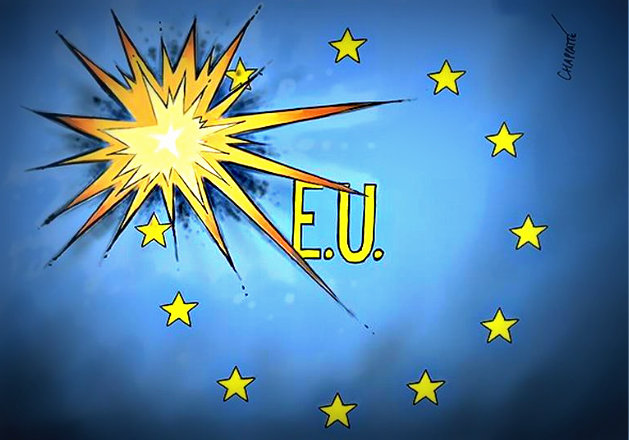 As Britain tries to recover from the shock of the Brexit referendum result. With its economy and its political scene in a turmoil.

And its racist bigots on a rampage.

I'm sure many of its REMAIN supporters were glad to hear Nicola Sturgeon, the First Minister of Scotland, vow to try to block Britain from divorcing the European Union. 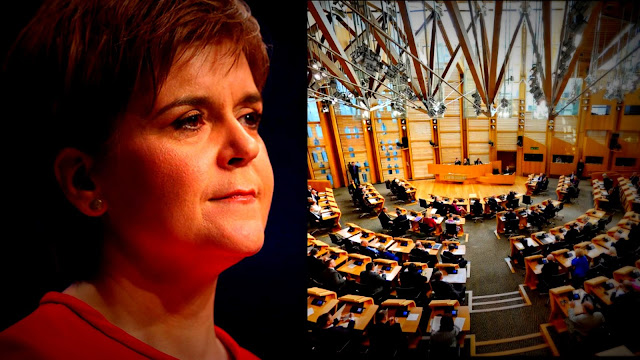 By withholding the consent of Holyrood the Scottish Parliament.

Nicola Sturgeon has suggested that the Scottish parliament could block the passage of legislation necessary for the UK to leave the EU.

But can Scotland really stop Britain from breaking away? The answer from legal experts seems to be no.

“Holyrood has no power to block Brexit. It is not clear that a legislative consent motion would be triggered by Brexit, but withholding consent is not the same as having the power to block. The Scottish parliament does not hold the legal power to block [the UK exiting the EU].”

But then if you read what Sturgeon actually said, she doesn't claim it can. All she is saying is that Scotland will fight the breakaway with every instrument at its disposal. And for two very good reasons.

One, the EU has been good for Scotland. Its left leaning SNP government has been able to mitigate the effects of the brutish economic policies of the Westminster Cons. So there is less anger and despair than there is down south.

The country is also more homogenous than England and attracts only a tiny fraction of  the migrants and immigrants that country does. So xenophobia and racism aren't a major problem.

And Scotland has for reasons of history and culture, always been more open to the continent than many of the residents of Little England, who John Oliver poked fun at a few days ago.

While making the argument that Britain would be crazy to leave the European Union.


Which has always been the position of most people in Scotland.

And two, the other reason Nicola Sturgeon is vowing to fight the brexit result as hard as she can, is because she knows that if she tries and fails, that can only advance the cause of Scottish independence.

For if the Scots are already so angry that their referendum votes counted for nothing, they now support independence in greater numbers than ever before.

A Panelbase survey for the Sunday Times indicated an almost direct reversal of the result of the 2014 referendum, with 52% in favour of independence, up seven points, and 48% against, down seven points.

A poll for the Sunday Post that asked respondents how they would vote if a second referendum were held tomorrow, revealed 59% would vote yes to independence, 32% no and 9% undecided.

It also found that 73% of under 25s backed independence, with even over-65s – the cohort most opposed to independence in 2014 – substantially more in favour at 47%.

Imagine how they would feel if the wish of their Scottish Parliament was ignored by the Brexiteer Cons, and also counted for nothing.

It's about escaping the bonds of an increasingly Con Britain, building a kinder, gentler more left-wing society.

And fulfilling the almost 300-year-old dream of making Scotland a nation again. 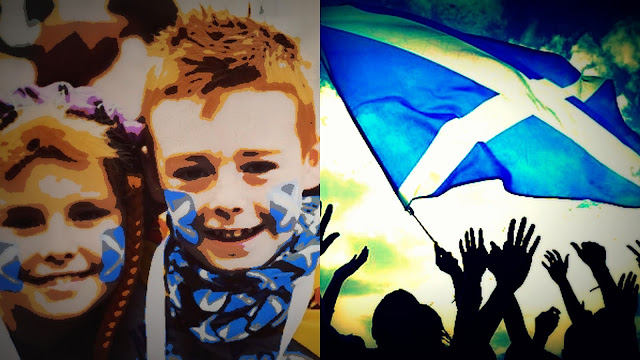 Which is also my dream. And has been since I was a young boy.

Even though thanks to my Mum I'm half English myself, so I obviously don't hate the people of that country. Just their tendency to vote for Thatcherite governments and impose them on others.

But I'm sure you can imagine how I'm feeling, now that the dream suddenly seems closer than ever to becoming reality.

So soon after the bitter disappointment of two years ago... 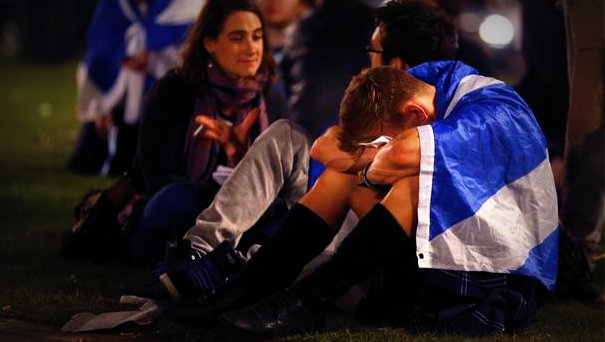 Which is why as I prepare to leave for Scotland I couldn't be happier, and am humming this song again.

But so be it. Scotland will have another date with destiny.

And with its young supporting the cause of independence in overwhelming numbers.

Sooner or later it will be a nation again... 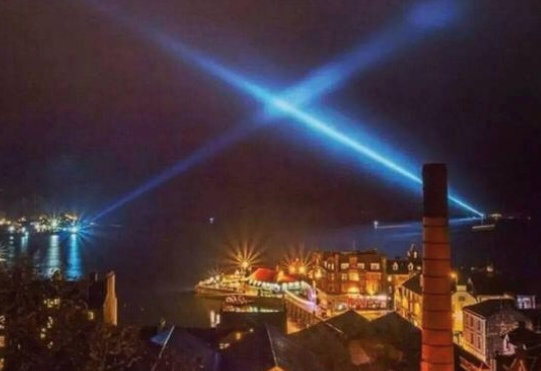 "The country is also more homogenous than England and attracts only a tiny fraction of the migrants and immigrants that country does. So xenophobia and racism aren't a major problem."

You hit the nail on the head there Simon. Once Scotland separates from the UK, we promise you can have all the immigrants and refugees you want. Just one word of advice. Be careful what you wish for. If 100,000 migrants showed up in Glasgow last year and another 100,000 in Edinburgh I'm sure the locals wouldn't be as welcoming.

Careful what you wish for Simon. The brutish Con austerity policy doesn’t come out of nowhere. It's being forced on all EU states by Germany.

Yes, George Osborne has taken particular relish in gutting the vestiges of the welfare state left by his Tory and "new Labour" predecessors. But little Scotland has more pull with Osborne within a United Kingdom than it will with Herr Doktor Wolfgang Schäuble.

What a load of old tripe. You have essentially said 25,000,000 English are racists. Rubbish. Outside London, things are not rosy - it's called bad, low or no pay (except in pockets) and poor housing courtesy of the kind of thinking harper was trying to give us here. Basically, all you heard from the bought-and-paid-for UK media was Leave is bad, and then they'd have an article on UKIP to drive home their point, drawing parallels where there were none to draw. And you've bought it hook, line and sinker.

Here in Canada you recognize bad trade deals and the oligarchy taking over - but in Brexit you assume the same takeover hasn't been happening in England and that people are dumb, preferring to believe the EU is all sweetness and light.

I was born in England, became a naturalized Canadian then returned for a while, living in both London and the sticks for four years. Night and day difference. You haven't got a clue what you're nattering on about, espousing an opposite point-of-view than progressives do in Canada on our own issues. The EU is hardly a fountain of progressivism - it's neoliberalism writ large. Look how they've handled Greece. It's banking and bad government all the way.

As for the 18 to 24 year-old-vote in the UK, sure they voted 75% to Remain, those that were energized enough to get out of bed and vote that is, and the proportion compared to the total was small. If indeed it is a betrayal of the young then they have themselves to blame because they could have changed the result if they showed more nous.

I really cannot see how progressives here have not been able to connect the dots between the right wing government putting down poorer English people, calling them stupid and racist, living rough lives and expecting them to remain wedded to payday loan companies as they pay their tithes to the rich banking elites. They want better, had no other way to gain attention, and expect some change for the better. However, as in the US, even more right wing people like Boris, who never gave a tinker's damn for anyone else ever, will deliver them to right wing hell. As Trump will do in the US.

Scotland can wave its collective sporran for the next few months - the arguments brought up so far by Sturgeon have been more self-serving than realistic. My relatives are in Kirkcudbright - where are yours?

The whole thing is a bowl of not good, and in my mind British politicians are to blame, first for treating half the country as nonentities for decades, doing eff all as globalism advanced, and then assuming all "thinking" people would vote Remain. And it's come to bite them all in the ass for not paying attention.

I am not sure if I agree or disagree that eremaining is best for UK, Simon, but one thing to remember is that the youth of the UK have never lived outside the EU, while the older peoples have. It may be the hope for a better life and a return to pre-1973 Britain that drove the older vote, which will not happen without alienating the corporations and financial sectors- while the youth were leery of the change to greater autonomy. Global trade deals and financial markets are making national borders less powerful, especially in financial and corporate transfer of wealth. I wonder if it is perhaps time that nations began to fight the inequality that comes with corporatacy . GS

Simon, Glenn Greenwald provides a very good overview of the Brexit issue in the Intercept.

hi MC...look I agree that immigration has to be regulated, but there are ways to do that without leaving the EU. Britain's immigration problems date back to its post colonial period long before the EU came along. And stats show that working migrants contribute more to the economy than they take out of it. The problem in England is a lack of jobs in the north, and the EU is not responsible for that...

hi anon...look I realize that the EU has not been working as well as it once did, and that the German policies of austerity have influenced it to an unhealthy degree. But if that's the case the British government could use what is after all a nonbonding referendum to demand changes, rather than breaking away. For beyond what it does or does not contribute to the economy, it's also a civilizing factor and has managed to keep Europe at peace for a long time.

hi GS...I think long people are far more mobile than the older generation, and there are many who work on the continent, and count on that to give them more opportunity than they can just get in Britain. I think the problem is that too many older people think they can turn back the clock to a Britain they remember, but no longer exists. And have been fooled by the demagogues on the LEAVE side. And when they realized they have been fooled it's going to get really ugly....

hi anon...I agree that what's happening is because of the failure of governments to provide jobs and security for their people. And the politics of austerity are leading us all to disaster. But I don't see why the EU is being treated as a scapegoat, when no government has been as harsh and as cruel as the Cameron Cons, and the gang waiting to take over will be even worse...

Nothing Simon? Nothing at all?

You got called out here, and there is nothing but silence.

How did using a referendum to demand changes work out for Greece?

Well tomorrow is a new day, and the Hill in Canada will be alive with two stooges and a great USA President. I wonder how many Mexicans can afford Canadian beef when even Canadians cannot afford it. I guess the drug lords and the corrupt friends of Mexico's president can afford it. Let's shoot peaceful protesters and continue the human rights violations and celebrate our corrupt ignorance with some good ole Canadian beef!!!!!!!! FS