The Real Reason the Cons Want to Muzzle Elections Canada

They are only 25 second ads designed to encourage young Canadians to vote in 2008.

But they are the reason the Cons are trying to muzzle the Chief Electoral Officer.

The government has disclosed the type of Elections Canada advertising campaign the Conservatives want to prohibit under controversial legislation to radically amend federal election law—a 25-second video that contrasts urban pollution and emissions to an evergreen forest as it urges youth to “vote, shape your world.”

A government official, who did not want to be identified, provided The Hill Times with a link to the 2008 Elections Canada ad archived on YouTube in an attempt to demonstrate the kind of promotional campaigns that Bill C-23 would prohibit under the Canada Elections Act, while restricting the chief electoral officer to only conveying information to the public about the basics of voting.

It couldn't be clearer or more OBVIOUS.

And this reply from Pierre Poilievre's office couldn't be more PATHETIC.

“The minister is not arguing that Elections Canada’s advertising drives turnout down, rather that it fails to drive turnout up, because it does not address the practical obstacles that prevent many from voting,” said his communications director, Gabrielle Renaud-Mattey.

Because what good is telling young people HOW to vote, if you don't motivate them to do that? And why wouldn't you try to do that by telling them they have the power to shape the future of the world they and their children will live in?

Of course, this isn't the only reason for the Orwellian so-called Fair Elections Act. It's also designed to help them steal the next election, and escape any possible consequences of having tried to steal the last one.

But it is why the Cons don't want the Chief Election Officer to run ads encouraging young people to vote. Because if they can't control the message it must be muzzled. Even in the classroom

And what this tells us is that Big Oil is not only controlling the Con agenda, it's now directly corrupting our democracy. As Big Oil always ends up doing.

But then why should we be surprised when Stephen Harper is muzzling scientists and burning books for the same reason? 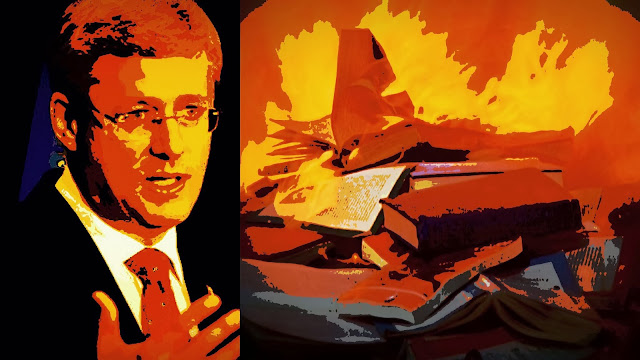 And continuing his never-ending insane war on the environment.

Canada’s efforts to combat climate change could be scaled down as Environment Canada braces for more budgetary belt-tightening over the next three years.

Even as the planet BURNS.

And now we know all this, the choice we face is also brutally obvious: Do we want to live in a reactionary petro state or in a democracy?

And how hard are we prepared to fight for OUR kind of Canada?

I'm going to be making my own YouTube ads to encourage young Canadians and older ones to vote. Because I find those ads a little too upbeat to motivate anyone in the darkness of Harperland.

I wish I could appeal to the idealism of Canadians, because I am deeply idealistic myself about the kind of country I want to live in.

But at this point I think the only way to motivate those Canadians too indifferent or lazy to vote is to show them the consequence of not doing their democratic duty.

And scare them to the polls by making it clear what kind of a savage jungle Harper and his Big Oil thugs would turn this country into if they are not stopped. 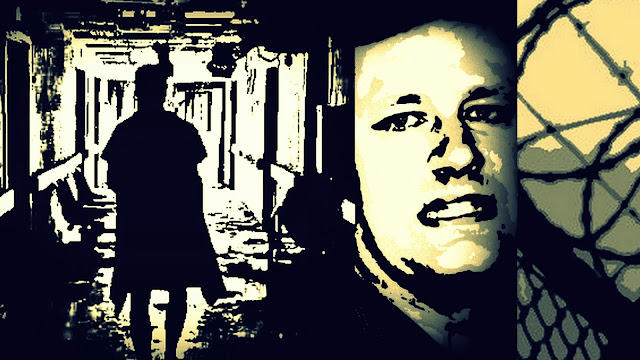 Even as they torch our future and the future of the planet.

And of course you know what my message is, since I have been repeating it night after night to the point of exhaustion on this blog for more than eight years.

Or we will organize, unite, work to turn out the vote like we never have before, so as to crush those evil Cons, and their depraved leader.

Or we will wake up one day screaming in pain, in a burning land.

In his nightmare world... 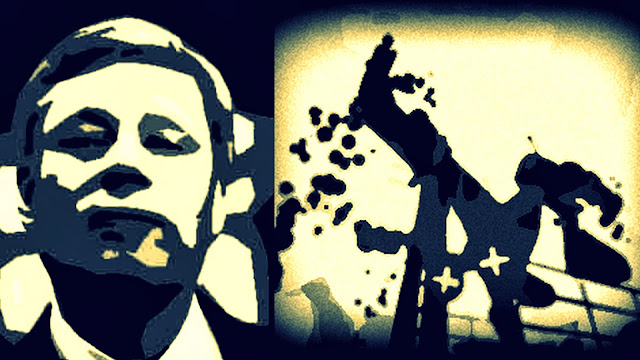 Sugar drinks may kill you faster than heroin, but the good news in both cases it was a free choice. Free choice is a brilliant, until it meats reality. We are all victims of goverment. But goverment is the only way to prevent us from being the victims of individuals. Now vote which is worse. Or in the case of voting Conservative you lose with any vote.

Attend an NDP Town Hall near you

excellent post Simon. thanks for fighting night after night.
shared this with folks so they too can understand why voting these criminals out is paramount and how were slowly losing the ability to do so.

Harper has a very shady political past. The Canadian Nazis donated to Harper's Alliance. Then, Harper was Policy Chief for his, Northern Foundation of 1989. Even Manning called Harper a dictator.

Most difficult of all is, people refuse to see through Harper. Harper has all of his degenerates lined up, to cheat this next election as well. How can people be so blind. It is impossible not to see through Poilievre and Brad Butt.

Harper is in love with Harper and absolutely nothing else. Harper loves everything benefits him, he is rabid for power, glory and being a big shot. Canada will eventually not be sovereign.

Stalin, Hitler and Mussolini were also in love with themselves, they were also dictators and control freaks. All dictators are sociopaths. All of them cheated to win as well.

Want to encourage or scare Canadians, especially the young, into voting? Tell them to look to the South, at the U.S., and to read this Essay: Anatomy of the Deep State 21FEB14 http://bucknacktssordidtawdryblog.blogspot.com/2014/03/essay-anatomy-of-deep-state-21feb14.html and The founding fathers would approve of this remix &Lawrence Lessig: We the People, and the Republic we must reclaim A TED TALK FEB 2013 13MAR14 http://bucknacktssordidtawdryblog.blogspot.com/2014/03/the-founding-fathers-would-approve-of.html . I am sure none of them want to become the mess we are.....

Hi Simon : Interesting that the Cons would so readily cop to admitting that a vid loosely advocating that youth exercise their vote for a cleaner environment is not in the Cons' own best interests.

Even more interesting is that the ad was killed off by Mayrand in 2007 and never used, according to a Hill Times update.

So ... fresh from attacking election fraud that doesn't exist, the Cons have moved on to attack EC ads that never aired.

Hi Simon! I am just fuming right now. I keep thinking that on March 31, the National Health Accord expires. If nothing wakes up those Canadians who never bother to vote, perhaps this will. If they get as steamed up as I am right now, they won't need a television ad to get them to the voting booth. Once they learn how much private health care will cost them, perhaps they'll all get off their fannies and get to the voting booths. Harper must be laughing in his beard. How he despises Canada and Canadians. We all need to stand up to this rotten bully. We need to fight this. I don't know how anyone in their right mind can even want to vote for this mad beast! I don't know how his wife can even stand him. If I were in her shoes, I wouldn't even be able to stand the sound of his breathing.

hi Steve...I see you're feeling philosophical tonight.And you're right as long as the Cons are in power, everybody loses except them and their Big Oil friends. But of course we have plans to change that and this cult is going down...

hi David...thanks for the list of places people can go to show their opposition to this bill. Although the NDP is organizing these Town Halls, every progressive should try to attend. The Cons are vulnerable on this issue and if we create enough of a fuss they could be forced to back down...

hi Deb...thanks, I'm glad you liked it. It's important that Canadians understand that the Con regime is now nothing more than a front for Big Oil. And every decision they make has something to do with that. One really has to wonder whether our fate is being decided somewhere in Ottawa or Alberta, or somewhere in Texas...

hi gingersnap... never mind his sordid past, it's his sleazy present that concerns me, and of course our future. But the good news is that thanks to Butt and Poilievre the Cons are looking like clowns, and they will help bring down The Great Dictator...

hi Craig....yes the voter suppression manual was written in the American south, the modern-day Republicans have perfected it, and our hapless Con clowns are following it to the letter. And they will pay for it....

hi Alison...yes I just noticed the bit about the ads never airing. I did notice that they hadn't been uploaded by Elections Canada, but isn't that the limit. First we have the invisible criminals, then Butt's invisible fraudsters, and now the invisible videos. Honestly, if you tell people in other countries what's happening in this one they think YOU'RE crazy.... ;)

hi anon...like you I can't think of a worse thing the Cons are doing than trying to weaken our medicare system. I'll be writing another post on that soon because I want people to know that March 31 will be a day of action. And we should all join in. It's hard to get Canadians into the streets, especially when there are so many different issues it's hard to keep up with all the crimes of the Con regime. But the way I see it, if they are allowed to get away with their attack on medicare, we will regret it forever...

Hi Simon, just discovered your blog. How? I did a Google search on f#*k you Harper. You write so well. Very funny and I really like the artwork. I have a lot of con friends. They know I am not a con but they don't know how much I despise Harper Flaherty Moore Baird Poilievre Kenny Calendar and all the other clowns on the right. Keep up the good work. Toews bugs the hell out of me as well. What a sad bunch. Today it really is all about the Koch brothers and big oil.

Even Harper's seat here in the Fort McMurray region isn't safe as I've heard a lot of grumbling about how his party has pretty much ignored the people of the region as we head toward a by-election. What annoys me when I discuss our region with Harpercons is their idea that people here all make mega bucks and should just shut up and be happy about it or move. This completely ignores the many people here who work tirelessly to make our city a better place. Like we should somehow accept our shitty infrastructure because we're all apparently millionaires or something.