Stephen Harper, the Melting Planet, and the Collapse of the Capitalist System 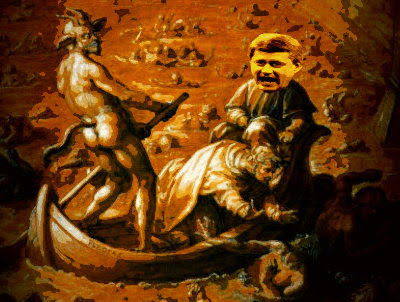 He has tried to deny the reality of climate change as long as any crazed person could.

Even as he torched the planet, and turned Canada into a hellish place.

But the world is warming, the ice is melting faster than anyone once imagined.

Global sea levels may rise faster than anticipated due to a rapid melting of the north-east corner of the Greenland ice sheet, according to scientists. This was widely considered to be cold and stable.

“The Greenland ice sheet has contributed more than any other ice mass to sea-level rise over the past two decades and has the potential, if completely melted, to raise global sea level by more than seven metres,” said Professor Jeremy Bamber of Bristol University, a co-author of the study published in the journal Nature Climate Change.

And the only sure thing is that Stephen Harper and his Con regime are leading us to catastrophe.

The Harper government's plan for Environment Canada, the department tasked with coordinating the country's environmental policies and programs, involves millions of dollars in cuts and hundreds of job losses over the next three years.

For him and his hapless Environment Minister Leona Aglukkaq are still criminal climate change deniers. 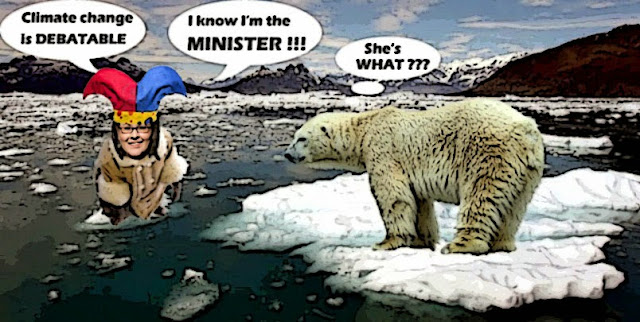 This will be undertaken despite 42.2 per cent cuts to pollution management and mitigation programs between now and 2016/17.

And Harper is a tool of Big Oil who has done nothing to prepare us for an environmental catastrophe that is bearing down on us like an express train.

But as if that wasn't apocalyptic enough, ask yourself how he plans to deal with this other man made crisis.

A new study sponsored by Nasa's Goddard Space Flight Center has highlighted the prospect that global industrial civilisation could collapse in coming decades due to unsustainable resource exploitation and increasingly unequal wealth distribution.

Modelling a range of different scenarios, Motesharri and his colleagues conclude that under conditions "closely reflecting the reality of the world today... we find that collapse is difficult to avoid."

Because what we're really talking about here is the collapse of the capitalist system.

"With a larger depletion rate, the decline of the Commoners occurs faster, while the Elites are still thriving, but eventually the Commoners collapse completely, followed by the Elites."

In both scenarios, Elite wealth monopolies mean that they are buffered from the most "detrimental effects of the environmental collapse until much later than the Commoners", allowing them to "continue 'business as usual' despite the impending catastrophe."

The two key solutions are to reduce economic inequality so as to ensure fairer distribution of resources, and to dramatically reduce resource consumption by relying on less intensive renewable resources and reducing population growth.

I suggest he is already preparing to deal with both emergencies in the same way. By slowly strangling our democracy, muzzling scientists, burning books, giving his security forces the power to track our movements, and read our e-mails.

And slowly turning us into a police state... 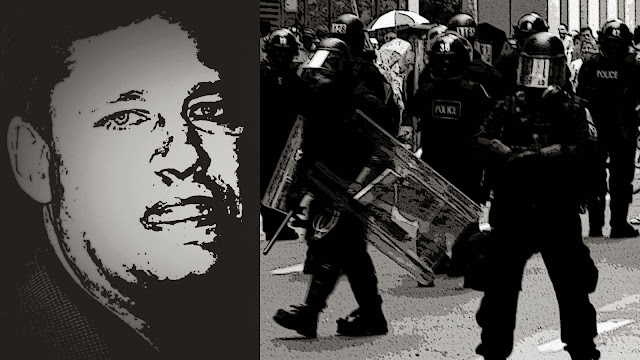 Because that is where he is taking us. And that's why.

Now imagine if Harperland is a sinister place today, what it might be like when everything starts breaking down.

And then do what we must to make absolutely sure we defeat him and his dangerous regime. 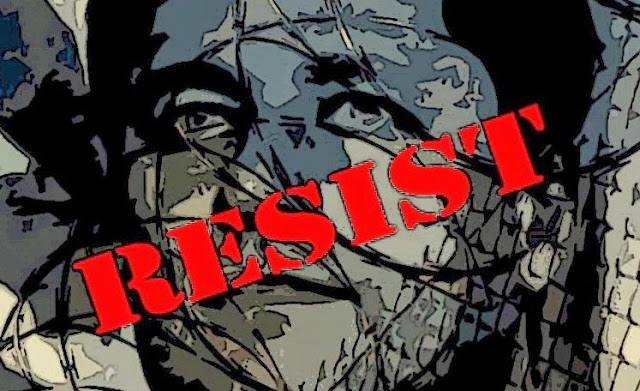 How do we resist? Please tell me if you know! How do average people who go to work each day and come home exhausted and then do what needs to be done to take care of their family and start all over the following day with the same routine day in and day out resist?

You can send your MP an email, if you're concerned about something. If they don't reply, resend the email or give them a phone call.

hi anon...I realize it's hard to think of political action when just getting through life is hard enough. But what I'm talking about is simply engaging in some way or the other. It can be by joining a party, or writing letters to your MP to the editor of a newspaper. Or maybe just by talking to your friends and neighbours or people in your workplace, and letting them know why they should care about some issue or the other. It may be just a rain drop but a million rain drops can carve a path through the rock...

finding the time to do things is as easy as turning off the t.v. Changing things can be as easy as writing to politicians and letters to the editor and showing up at demos on weekends. Make the demos a family out day, pack a lunch and off you go. The Ban the Bomb marches in Vancouver in the 70s were family days.

Items made in "living wage" countries are more expensive, but you tend to purchase less and get a better quality. With less things, you can live in a smaller home, which costs less to maintain. We currently have very large homes being built, all with 2 car garages. What's in them? Junk we no longer use. Do we need that 2 car garage? No.

You can run for office, even if you know you are going to loose. You can make sure you vote in every election and take a friend with you. You can buy local. Our economy in a lot of places in Canada is based on consumer spending. It just can't continue. At some point people will run out of money and credit.

If you really want to have fun, when an M.P. says or does something you don't like, don't just send an e-mail, hand write a note, put it in an envelope and mail it to them. You don't need a stamp. Enough letters and they won't know what to do. E-mails just sit on a computer, letters are actually something they have to look at because they are real.

In B.C. we have the highest rate of child poverty in Canada and have had for 10 yrs except for one yr. when we were no. 2. So my comment to people is, So how is the provincial government working for you now? You voted to continue the highest rate of child poverty in Canada. People actually stop and look at you and they don't know what to say. They get uncomfortable. People vote, but sometimes the just don't think about what they are doing. Works really well.

I think we all know by now, Harper is a dictator and a sociopath. So, how do you shame a dictator with, no ethics nor morals, what-so-ever? All you need to do is, read the Fair Election Plan, Poilvievre and Brad Butt? Good gawd! Look at Harper mouthing off in the Crimea situation. Harper and Baird once again, are an embarrassment to Canadians. Harper insisting on Democracy in the Crimea is completely laughable, coming from a dictator. Harper's list of degenerates is as, long as his arm

We would have to do what some other countries did? Run that evil Harper and his henchmen, right out of Canada. Look at his low life behavior and the evil Harper, has already done to this country? The opposition is useless. They have permitted Canada to become a fascist dictatorship. We went to war so we wouldn't have a fascist dictator running this country. Quite frankly? Harper is not worth our young Canadian boys, to die for.

hi e.a.f...that's a very good list of suggestions. The important thing is to do something, not just look on helplessly as our country is consumed by that crazy Con clown posse. We are more of them, and if we combine our forces to get out the vote, we will defeat them...

hi anon...I doubt you can shame Harper. He'd have to have morals and a conscience for that to happen, and I see no evidence of that. However, if we join forces, and organize, and get the word out, we can humiliate him in the next election...

hi Hugh...good suggestion. It only takes a few minutes to do that, and it does let them know how we feel....

Thank you Hugh and Simon. I will get very busy doing this!