Olivia Chow Gets Ready To Take On Rob Ford 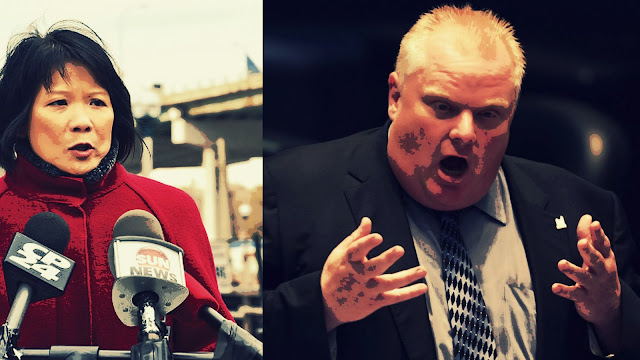 Well it seems like I've been waiting forever, but Olivia Chow is finally ready to begin her campaign to become the next Mayor of Toronto.

After a year of careful preparation, Olivia Chow is finally ready to enter what is fast shaping up as a tough race to become Toronto’s next mayor.

Chow is fully expected to file her formal nomination papers at city hall during the week of March 17 and will immediately release her complete campaign platform, which is being described as “ambitious, surprising and bold.”

And it seems like it has been worth the wait. She has a solid campaign platform, a first-rate organization, she is still the only left-wing candidate in the race. Her polls even before she declares have been very encouraging.

Chow, currently the NDP MP for the downtown riding of Trinty-Spadina and a former city councillor, has been the front-runner in virtually every public opinion poll over the past year.

And the timing couldn't be more perfect.

Her decision to delay her entry until late March was a calculated move aimed at giving a bit of time for Ford, Tory, Stintz and Soknacki — all seen as conservative-leaning candidates — to start attacking each other instead of focusing strictly on her.

With the right-wing candidates splitting the vote and fighting each other, and the city still reeling from Rob Ford's humiliating appearance on the Jimmy Kimmel show. 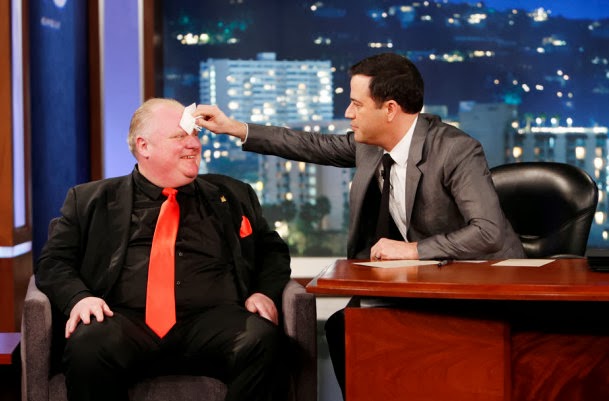 The 5-year-old kid was smarter. The Muppet had more substance. Squished between those two featured guests was The Oaf Who Did Not Take Hollywood By Storm, dressed up like a pimp — one of the few unsavory stock characters not heretofore associated with Mayor Rob Ford — and as leaden as an anvil.

Because even some of the moronic members of the Ford Nation have been forced to admit that Kimmel made their hero look like a FREAK.

Ford didn’t even have the reflex to duck, just sat/stood there looking like a stooge. He’ll never get it: That he’s the joke and they’re laughing at him, not with him. In another era, he’d be the freak-geek on the midway.

And of course Ford now has not one but TWO police forces investigating his nefarious activities.

The OPP is assuming oversight of Project Brazen 2, an ongoing Toronto investigation that is targeting both Mayor Ford and his friend, alleged drug dealer Alessandro Lisi.

So far, the investigation has resulted in the arrest of Mr. Lisi for drug trafficking and extortion related to the infamous crack video, and tracked the mayor around the city for months, documenting Mr. Lisi and Mr. Ford's meetings.

So we can't even be sure he won't be arrested before the election. As I believe he will.

And of course this isn't a good omen.

But it is an omen. I haven't the slightest doubt that Toronto is ready for the change Olivia Chow can bring. This city deserves better.

And I'll be joining her campaign as soon as I can.

And this Con hog is going down... 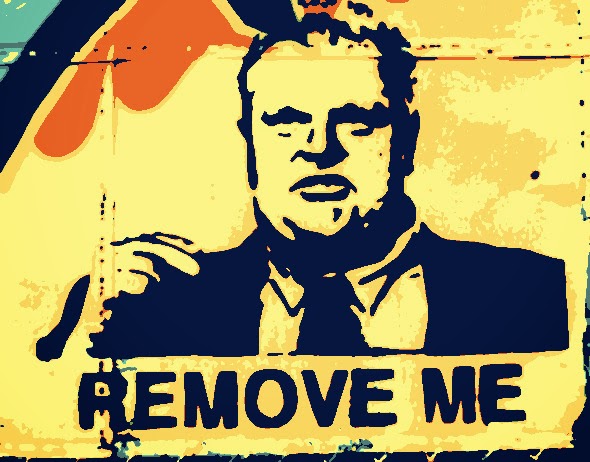 I'm so glad that Ms. Chow is running for mayor..it would be nice for Toronto to regain some respect in the country, as well as for itself..

It will be truly wonderful if Ms. Chow wins the election. However, living in B.C. and seeing the provincial lieberal re-elected after all the messes they made, there is little faith left in voters. People don't always know the difference between getting a lot of publicity and being famous.

hi mizdarlin....yes I am very excited about Olivia's impending entry into the race. To have a normal decent person running Toronto would be such a welcome change. And of course having a woman running things is a BONUS...:)

hi e.a.f...what you say is true. Ford is a product of our shallow celebrity culture. But then if I was ever in his immediate vicinity I might succumb to having my picture taken with him to amuse my friends. For they definitely would be amused. But of course, never in a thousand years could I ever vote for that hideous thug...

A woman and an Asian person. Not that I'm for any kind of tokenism, but Toronto has people from the world over, it would be a good sign. Is South Asian (but born in Tanzania) Naheed Nenshi the first Asian mayor of a major Canadian city?

More important from my admitted lobby, she is a CYCLIST. She would certainly have a different attitude towards pedestrians and cyclists than get the f¨ck out of the way of my truck Ford!

I'm not sure about where he was born and being the first south asia Mayor, but he is the first Muslim, , Mayor of a major Canadian city. If Canada had more politicians like him we would be in much better shape. The guy cares about people, is smart, well educated, and it would appear he enjoys what he is doing and doing it because he likes people and is committed to helping people. His leadership during the floods was great.

No offence, man, and I do thank you for trying to show another opinion, but what do you mean another NDP mess? Sure, Bob Rae turned out to be a Red Tory in Dipper clothing (and bailed out to become a Grit), but when the hell outside of 5 years of Rae have the NDP held power in Ontario? None. (And give the Dippers credit: they reneged on most of the Rae-era conservatism).

And if you are going to lambast the NDP as a party that the Tories have to clean up after, at least give some examples. For example, the Tories (federally) have spent god-knows-how much on an "Economic Action Plan" when nobody knows what the hell it does, spent $20B on jets when it could've been invested in education and healthcare, etc.

Might I also add that Rob Ford (an ally of the Tories) has been something of an embarrassment to Toronto (and Canada)? There is a time and place for egocentric, loopy, and childish behaviour. It is not in City Council, imitating somebody driving drunk when you have just admitted that you once smoked crack (and would later get drunk and cause a spectacle at Tim Hortons), etc.

I, for one, will support Olivia Chow for Toronto Mayor. Between the Tories vote splitting (if all Tory candidates stay in the race), and Chow's popularity, it might be an easy victory.

another NDP mess to clean up, ya right. the only real mess is Rob Ford. no other person has been such a mess in recent history.