The Ukraine Crisis, the Con Klowns, and the Cold War Warriors 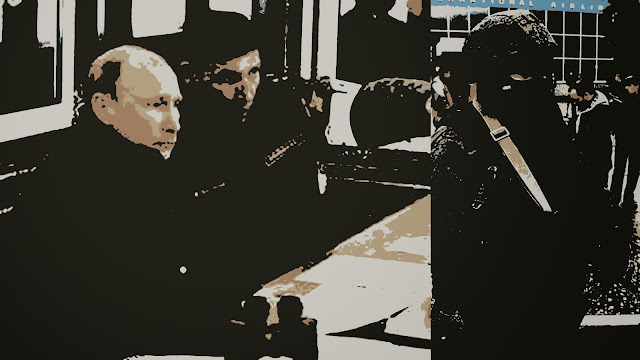 It's hard to imagine a scarier situation than the threat of a superpower confrontation in the Crimean peninsula.

The Obama administration said Monday that any Russian threat to Ukraine's navy would be a "dangerous escalation" of an extremely tense situation.

The State Department said that Washington would hold Moscow directly accountable for such an escalation but did not elaborate on potential consequences.

Or a scarier sight than the old Cold War warrior John McCain, banging his tin drum for war with Russia. 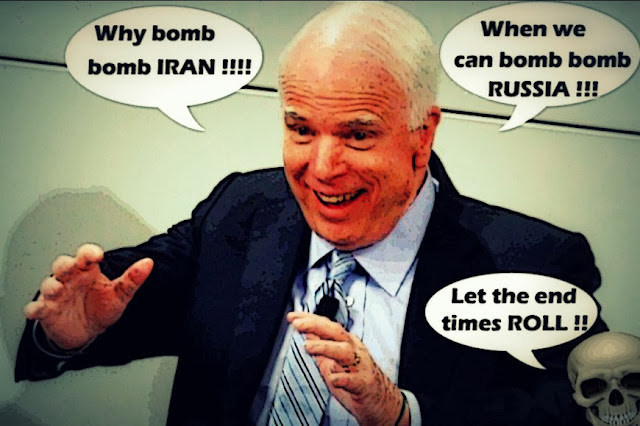 Sen. John McCain, R-Ariz., blamed President Obama's "feckless" foreign policy for inviting the crisis in Ukraine on Monday, telling a pro-Israel group that the president has repeatedly failed to demonstrate American strength in the face of adversaries.

Along with the rest of the Republican gang that brought us the disastrous invasions of Iraq and Afghanistan.

On Sunday, Sen. Lindsey Graham, R-S.C., told CNN, "We have a weak and indecisive president that invites aggression." And Rep. Mike Rogers, R-Mich., said on "Fox News Sunday" that Russia "is playing chess and I think we are playing marbles."

When in fact, as Michael Cohen points out, it's not Obama's war, military action is unthinkable.

And who needs a superpower confrontation when Putin is already the big LOSER? 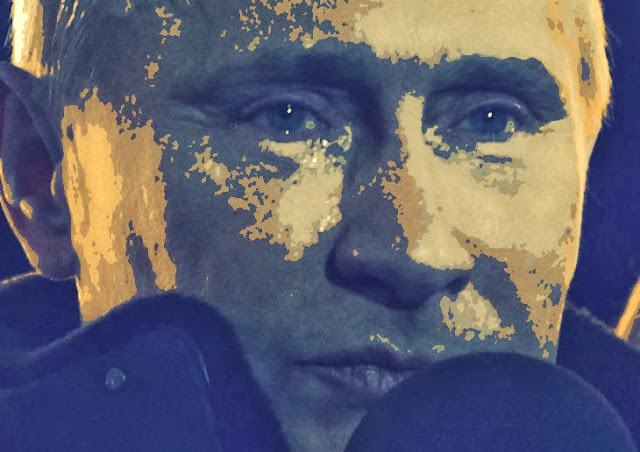 Putin has initiated a conflict that will, quite obviously, result in greater diplomatic and political isolation as well as the potential for economic sanction. He’s compounded his loss of a key ally in Kiev by further enflaming Ukrainian nationalism, and his provocations could have a cascading effect in Europe by pushing countries that rely on Russia’s natural gas exports to look elsewhere for their energy needs.

Putin is the leader of a country with a weak military, an under-performing economy and a host of social, environmental and health-related challenges. Seizing the Crimea will only make the problems facing Russia that much greater.

Which only makes what John Baird had to say today sound even more ridiculous or irresponsible.

Foreign Affairs Minister John Baird has compared Russia's troop presence in Ukraine's Crimean Peninsula to Hitler's invasion of Sudetenland, a part of the former Czechoslovakia, in 1938.

Baird, speaking to host Evan Solomon on CBC News Network's Power & Politics, accused Russia of invading and occupying Crimea, a part of Ukraine. "If it's not war, it's akin to war," he said.

For the last thing we need is to have the Cons inflame an already tense situation, or reduce it to a caricature.

Or try to make it look like they're leading the charge of the light brigade... 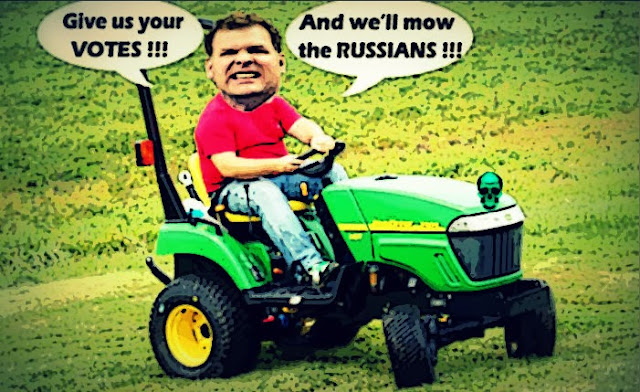 But then as Scott Taylor points out, Baird has been there before.

When the rebellion started in Libya in 2011, Baird shouted “Gadhafi must go” and with the aid of a massive NATO air bombardment, he went. In Gadhafi’s wake came a failed state rife with violent anarchy, which then spilled over into Mali and Syria.

When the revolution began in Syria, Baird shouted, “[President] Assad must go.” That was until it became all too evident that Assad was battling al-Qaida and then Baird thankfully went mute.

Now Baird is walking the streets of Kiev in a yellow and blue scarf yelling Yanukovych must go. At least he is consistent.

He is a buffoon.

The Cons will do ANYTHING in their shabby pursuit of the Ukrainian-Canadian vote.

And all we can hope for now is that the opposition can restrain them and their deranged leader.

Before they lead us further into the Valley of Shame.

And take the world to the brink of destruction... 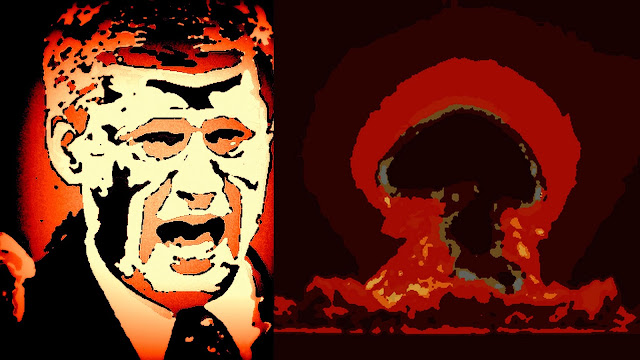 The US which invaded Iraq and reduced it to rubble and NATO which bombed Libya and reduced it to rubble are huffing and puffing and telling us Russia's action in Crimea are the equivalent of Hitler's. At least Putin is defending some ethnic Russians. The US and UK were defending oil corporations. We know the conservatives would probably like some military action to take the attention off their incompetence and corruption. Let's not fall for this. Let Ukraine settle it's own problems.

Watching that spectacle distraction pandering fool operating over there is painful. Kerry will be there this afternoon and if bairds lucky he might be able to get in a quick rimjob. A few things come to mind while watching this debacle. Putin is clealy a shithead tyrant. America is fomenting unrest over there, presumably as payback for the edward snowden affair. And this is just speculation, but I'm beginning to think that the entry of the uss taylor and mount whitney into the black sea wasnt really about protecting olympic athletes. Considering they made a quiet agreement with france on jan 21 to send these warships in, one might wonder if the french have colluded somehow to destabilize gas lines to europe in order to capitalize on their own nuclear power. Its plausible after seeing what they did to shut down exploration of gas reserves in poland not too long ago. Big money is at stake. Finally, the hypocrisy in the west is deplorable. Could you imagine the response if the japanese decided to take back the naval base in okinawa?

I am hoping that like the Jewish Vote the Ukrainian vote is not a monolith of Pavlovs dogs. Ukraine brought this problem upon itself by electing two corrupt regimes. It should be a stern warning for Canadians

For better or worse Russia is was and will be one of the worlds great powers.You do not tug on superman's cape.

Hi Anon,
We may not see the entire picture -
Read - http://www.vancouverobserver.com/news/confused-ukraine-crisis-it’s-about-russian-natural-gas-and-empire-expert

Putin isn't defending people, he's defending pipelines.
It's the same the world over and Putin is no different - follow the money.

we don't need another Syria and that is what will happen if Putin is engaged by military forces from other countries. we in north america forget, its not our countries which will have urban warfare in our cities, nor will it be our children dying, nor will we have bombs falling on our country. What Putin has done is wrong, but creating another war, we don't need isn't going solve any problems.. The Ukrainians might not like Russians in their country, but it usually beats being dead.

If we in North American want to be helpful, then allow the Ukrainians who don't want to live in a Russian dominated country come here as refugees. that won't be happening either.

we have seen enough of Republican instigated wars in the middle east. all that happened was a lot of innocent people got killed, cities destroyed, and American companies making a fortune. Lord protect us from those wanting war to "free"the others. If the Republicans and people like Baird want a war, I've a suggestion. Let them go to war along with anyone over 70. Leave our young people alone. Canada doesn't look after the Veterans they have, lets not create more.