The Winter from Hell and the National Unity Hysteria 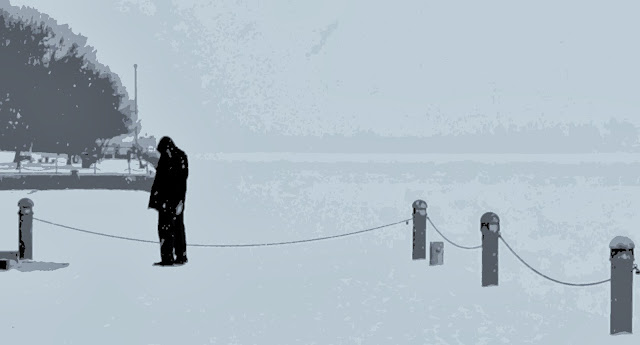 In his well known song Mon Pays, the Quebec poet and singer Gilles Vigneault famously sings: "My country is not a country, it's the winter."

And in this seemingly never ending one, this Winter from Hell, I think we can all relate to that.

But since just a few weeks ago during the Olympics we were all happily chirping or tweeting #wearewinter we can't complain too much eh?

Even if it seems to be driving a lot of Canadians crazy.

For what else can explain the hysteria over national unity?

Because that's the only way to describe the reaction in English Canada since this dynamic duo made their debut appearance... 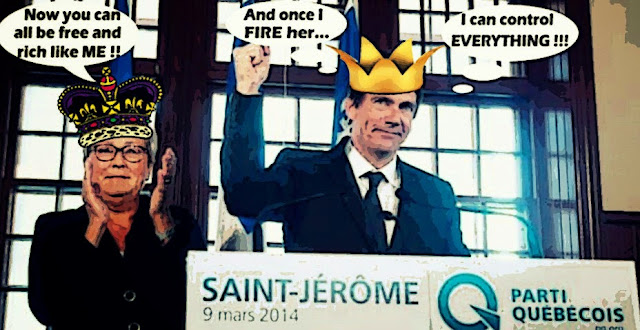 Since then the MSM has been in a frenzy, churning out more articles about referendum fever than is healthy to read. And the torrent of threats and just plain anti-Quebec hatred in the comment sections has been absolutely disgusting.

And what makes it even worse is that it's all so ABSURD.

For anyone who knows anything about Quebec should have known that the sight of an uber right-wing billionaire waving his fist in the air like a sixties radical, and announcing he wants a country, is the last thing most Quebecers want to hear, and definitely the last thing the PQ needed.

For it could cause some of their soft nationalist and left-wing supporters to seek the safety of other parties. Which is exactly what seems to be happening.

A new voter intention poll suggests the Parti Québécois and Quebec's Liberal Party tied at 37 per cent. The internet poll was conducted by Léger Marketing for Le Devoir newspaper between March 11 and 13. It queried 1,205 people 18 years and older.

And it couldn't be clearer that even if the PQ does squeak out a majority, most Quebecers don't want to separate.

Which explains why after warmly embracing Pierre Karl Peladeau and his separatist rhetoric, Pauline Marois is now furiously peddling backwards.

Parti Québécois Leader Pauline Marois is now playing down sovereignty as an issue in the Quebec election campaign after witnessing a sudden surge in interest for national unity since media baron Pierre Karl Péladeau emerged on the scene as a separatist PQ candidate.

And pushing him out of the shot... 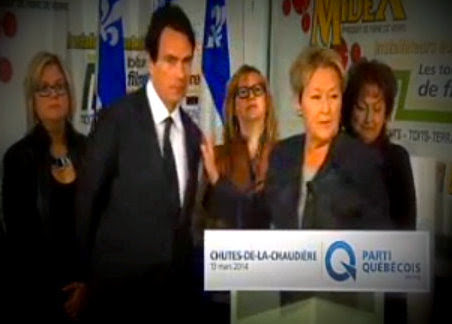 And it would all be highly entertaining, especially for a person like me who has one foot in each solitude, and loves them both warts and all.

Except for the real danger that this hysterical episode, born of ignorance and distrust, could lead us to a very bad place.

Because firstly, it's a massive distraction from the struggle against the Con regime. One that sucks the oxygen out of so many more important issues. The ones that are really killing our country.

Two, Stephen Harper could one day harness all that toxic anti-Quebec feeling to campaign against the province in the next election, and win himself another majority.

And three, as I have pointed out before, and as the former PQ Premier Bernard Landry told the CBC the other day, the man who would pose as a Great Patriot Leader is really the separatist-in-chief. 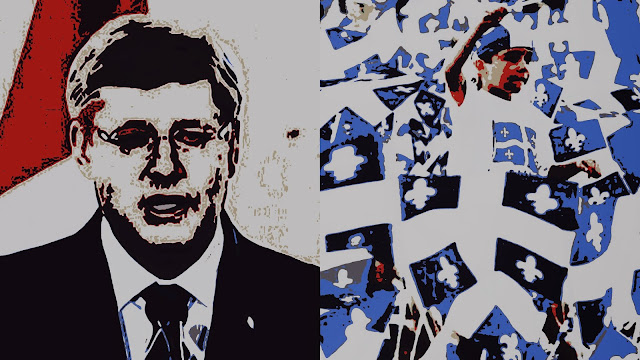 Former Quebec premier Bernard Landry says Stephen Harper's policies are helping the sovereignty movement in Quebec. In an interview with Evan Solomon, host of CBC Radio's The House, Landry said Harper has been an involuntary ally of the Parti Québécois.

And the only leader, at this point in our history, who could break up this country by driving Quebecers to separate from a Canada they helped build, but can no longer recognize.

Aided and abetted by the howl of the anti-Quebec bigots. For who wants to live in a country where you are hated?

And the good news? The fact that most Quebecers haven't embraced separatism after eight years of Harper, shows that they still believe they can defeat him.

Like they tried so hard to do in the last election by switching their support massively from the Bloc to the NDP, and all but shutting the Cons out of the province.

Only to be let down by those in English Canada who spooked by Jack Layton and his orange wave switched their votes to the Cons.

And what people need to understand is that sovereignty for the sake of sovereignty, as peddled by Marois and company, is mostly just the last hurrah of the baby boomer generation that came of age at a time when the French nation in Canada was asserting its identity, and worried about its survival.

But the younger generation doesn't share those insecurities, it feels comfortable in its skin as we say in Quebec. It's more interested in real change, and its values mirror OUR values.

As they proved two years ago when they began a struggle that despite more than 3,000 arrests evolved to include people of all ages, and became a debate about the kind of society they want to live in.

The people of the red square, that this blog still wears so proudly, and I can never forget...

Yup. Those people aren't our enemies, they're our allies. They want a better Con-free Canada just like we do.

And the day we achieve that better Canada, will be the day the separatist movement will start to wither on the vine, even more than it already has.

So we should embrace the progressive people of that province, not reject them as so many seem to want. For if they ever did leave the rest of the country would be Conservative for ever and ever and ever.

And on the real enemy who would destroy it... 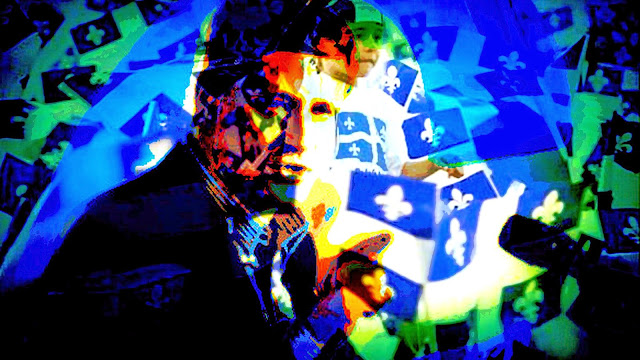 Got to agree totally.

Harper and the Cons have to go and the rest of Canada needs Quebec to be whole within Canada. Quebec can prosper within a "Harper Free" Canada. Quebec's strength is the younger generation that has protested injustice and see Harper for what he really is and will not support his dark future. All of Canada will be stronger when the Harperectomy is successfull.

Simon, as I mentioned to Owen at Northern Reflections, people forget:

Meh. Péladoo-doo from the Péladodo, stirred up by Canadian media, especially newspapers to try and earn some money.

The referendum is a non-starter. Why? People forget a picture of the last time round, of one of the First Nations chiefs holding a picture of what Quebec looks like without all the Aboriginal land. As the chief said, "Our deal is with the Crown".
Now, add the Eastern Townships, south of the St. Larry that are contiguous with the US. Last time round, they declared their intention to secede from an independent Quebec. The maitre-cheez-whiz crowd went completely ballistic over both problems, which are unchanged. So if Quebec leaves, it's gonna be a lot smaller than the Péladodo thinks.

I think harpie will force the separatist issue to a head for the next election. he can't control Quebec so he will make sure that "English" Canada helps them, through all the racist hatred that only the cons are capable of manufacturing, secede and at that time, he will make goddamn sure they fail as their own country strictly for the sake of revenge on his behalf for them not kowtowing to his regal majesty when they still had the chance. he will simultaneously instill the uber-nazionalistic fear and loathing in the rest of Canada necessary for him to be able to keep his filthy neo-nazis in office forever. It's always easier to control fearful people. Just look at 'murka to see how it works. harpie is.

Is it such a burden to accommodate Quebec? I love how they spend the money, tips to the mob excludied. Yet I wonder if Mr Fantino could not illuminate the landscaee in a new light.

If Quebec votes to leave Canada this time, a lot of Canada won't object. They may try to find their own way out of Confederation.

First Nations most likely won't leave with Quebec. They could in fact decide they don't like the rest of Canada either and go their own way. This leaves Quebec with little land. True Harper hasn't done much for Confederation and has done much to encourage separatist feelings. Living in B.C. I'd like out of Canada also, but that would leave us with the Christy crunchers and that isn't a great feeling either.

Quebec has had a lot of progressive programs which benefit regular citizens. They didn't want the federal Cons and took their vote elsewhere, NDP, if they stay with the NDP and other parts of Canada vote Liberal, the cons maybe finished and we can all get back to making Canada, Canada.

While I agree about Indigenous self-determination, "Maitre-chez-whiz" is anglo racist crap. Disgusting. Fuck you.

I have zero love for serial union-killer Péladeau, but not a whit more for latter-day Westmount Rhodesians.