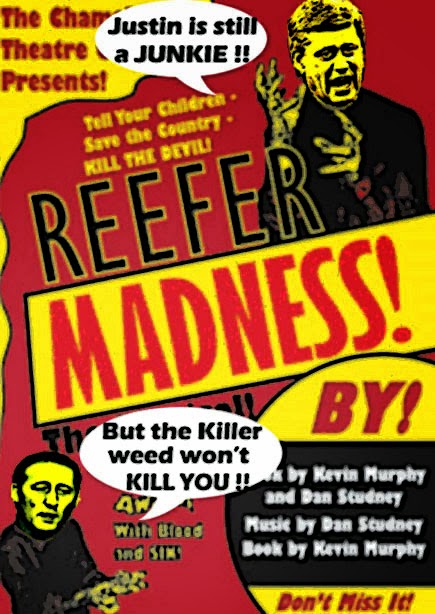 Golly. Can you believe it? It seems Stephen Harper and the Con regime have changed their minds about marijuana.

Forget everything they said before, or the disgusting way they tried to smear Justin Trudeau.

Justin is still a junkie, but the killer weed is NOT the source of all EVIL.

The Conservative government is looking at softening Canada’s marijuana laws by allowing police to write tickets for small-scale possession cases instead of laying charges.

“Criminal Code offences would still be available to police, but we would look at options that would give police the ability, much like the treatment of open liquor, that would allow the police to ticket those type of offences. We have not arrived on the exact mechanism in which that could be done,” Mr. MacKay said on Parliament Hill on Wednesday, adding: “We’re examining it. It’s not decriminalization. It’s not legalization.”

Because Dumbo really had to do SOMETHING to change his image as the poster boy for binge drinking... 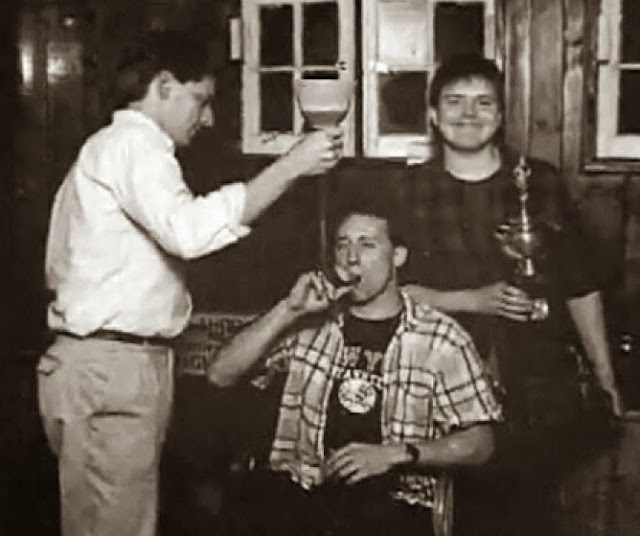 Which as I've pointed out before, is far more dangerous than marijuana.

And just as bad for young Canadians as throwing them in jail for the "crime" of smoking it.

So it is a small tiny teeny step in the right direction, even though it could lead to even MORE marijuana busts.

One critic said the move, if implemented, could be more onerous for recreational marijuana users, as police who turn a blind eye to it now would instead start writing tickets.

And still leaves the growing and selling of marijuana in the hands of organized criminals who could be selling us ANYTHING... 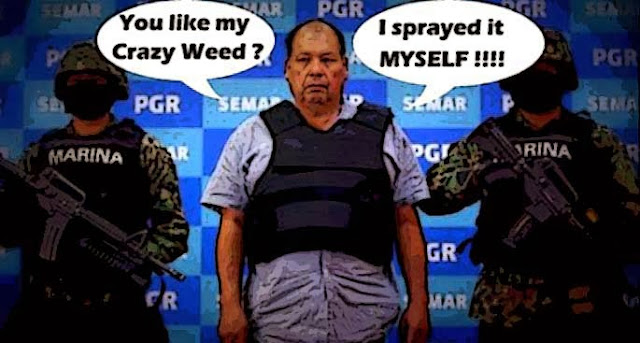 But that's the Harper Crime Agenda eh? Talking tough to criminals, while making them rich, and killing us gently.

And it does make me wonder what on earth caused Stephen Harper to change his mind? 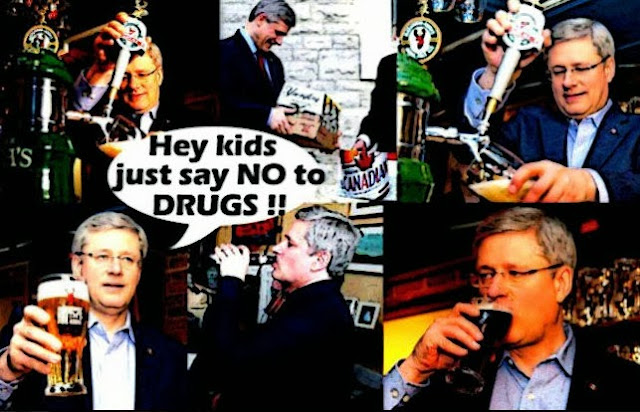 Could it be the polls that show that support for decriminalization and legalization climbing steadily? 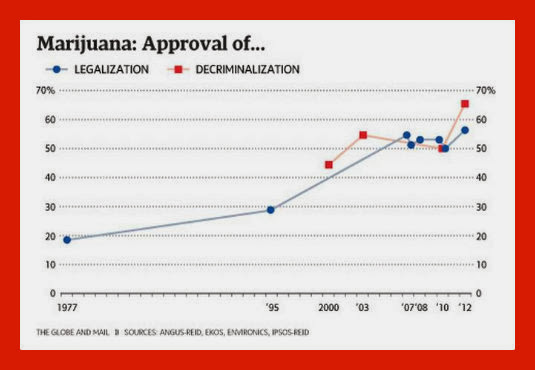 Could it be the example of little Uruguay which has legalized marijuana?

And was recently named "Country of the Year" by The Economist.

Modest yet bold, liberal and fun-loving, Uruguay is our country of the year. ¡Felicitaciones!

You know the magazine that Harper reads because he's a "real economist."

The magazine that once thought we were COOL when we considered decriminalizing it TEN years ago... 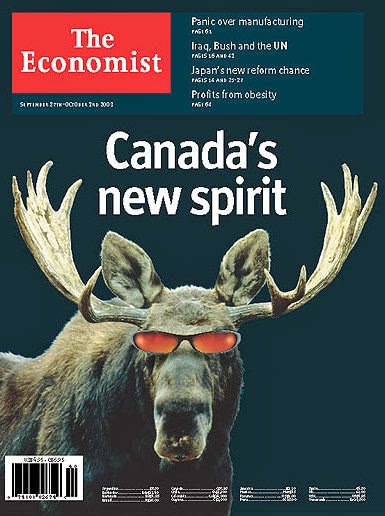 So nobody's calling us "bold, liberal, and fun-loving" anymore. *Sigh*

And from that high point it's been downhill ever since.

But still none of the above can properly explain Harper's incredible flip flop on the marijuana issue. Or why he now feels driven to come up with a pale version of Justin Trudeau's idea. After attacking him so viciously and accusing him of being a junkie.

Except that him and his Cons must be DESPERATE.

They were so eager to destroy Justin Trudeau, they attacked his ideas about marijuana reform like a pack of rabid hyenas. Only to realize too late that they were POPULAR. And could make young Canadians swarm the polls in the next election like they never have before.

But playing the piano, and wailing like a banshee, clearly isn't working.

And neither will this... 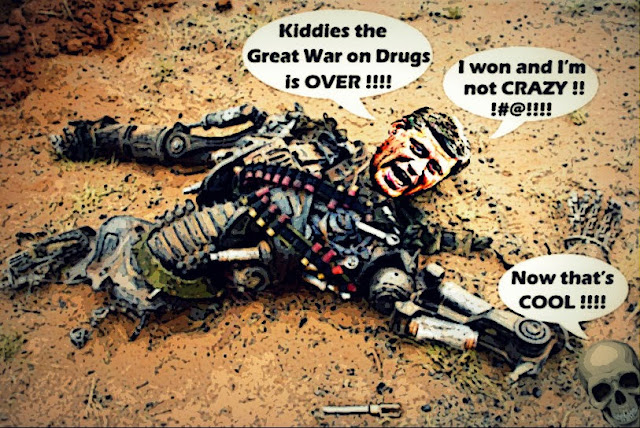 Because sadly for him it's too late.

Nobody could trust him with the marijuana issue after he has worked so hard to jail so many Canadians for a crime that should not be a crime.

Nothing can save him now. He's getting buried or smoked by the forces of change.

And his Reefer Madness will soon be over...

...maybe the con's should've notified their ad department to stop running radio spots, implying- JT wants to sell dope, to YOUR kids! Timing is everything...

It does give me great pleasure, Simon, to realize the fear that must be pervading the Tory ranks over Trudeau's popularity; I especially revel in the loathing Harper must feel over the fact that they must now change their stance on marijuana because of the Great Satan, JT. Guess they'll also have to pull that insipid ad where the parent expresses such concern over JT and pot.

Starting April in Canada, local medical marijuana outlets & home growers are gone. The production has been given to a few large corporate businesses for the profit. Only dried weed. Only a very limited choice of strains and regulated potency that will be mailed to you (unlike the personal knowledge and service we have now). It definitely won't be cheaper. Corporate profit trumps the needs of patients. We must be controlled and protected from the 'evil' plant that has evolved in co-operation with us? The Harperites simply hate independence of thought and action.

hi Steve....I'm not exactly sure what getting a ticket for smoking pot would mean. Could it be used against you if you visited the U.S.? Because I remember that recent story about a person who was denied entry because while suffering from depression they tried to commit suicide. So if that information is being shared with the Department of Homeland Security, what other information would they share?

hi liberalandlovingit....like everything the Cons do it's all for show and artifice, it has no grounding with reality, and they probably believe they can have their cake and eat it, or get away with ANYTHING. I'm afraid we are going to have to teach them a lesson they'll never forget....

could be some parents, conservative donors are afraid little Jimmy and.,or jannie could have a criminal record for having some weed on them. Parents could be real grumpy about that.

Of course it could be they saw that Colorado took in around $100MILLION in less than 2 months in taxes on the selling of weed, now that it is legal. this maybe the cons way of back peddling. Some years ago I read a book about the future legalization of pot. The author's rational was, governments would need the taxes. it was one of the things which led to the repeal of the ban on liquor in the U.S.A. too much money lost to government coffers and too much money spent trying to stop it.

hi Lorne...yes they are looking a little ragged,and I'd give anything to be a fly on the wall at one of their PMO meetings. It must by now resemble a cross between a cracker barrel revival meeting, and a flea circus. I only hope that out of this madness will eventually come some sanity on the marijuana issue...

hi anon....well that is a problem with giving the Cons total power over the medical marijuana industry. And I can only imagine what kind of skunk weed they might produce. But of course if they produce such an inferior product, it will be useless for those who need it, and others will fill the void. I mean that's capitalism isn't it? Aren't the Cons for that? ;)

Simon I bet your right, this move will actually be more draconian than the status quo.

they will pass it off as a green initiative, hey before now all that good stalk was thrown away. The cons are so madding. Today on QP the cons was saying we want property rights for aboriginals, and the question was, how to stop aboriginal women from disappearing.