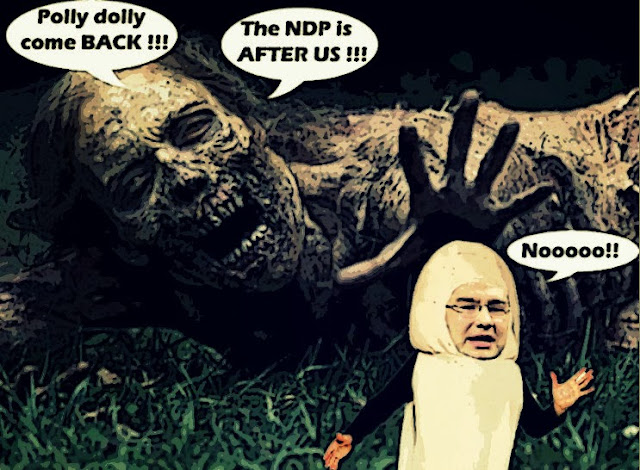 Oh. My. Zombie. I see that Pierre Poilievre is on the run again.

And this time he's not just running from his foul voter suppression monster, which is threatening to swallow engulf him.

The Official Opposition NDP has launched a country-wide series of town-hall meetings on proposed election law changes after the Conservative government rebuffed a request for similar hearings.

Beginning this week, New Democratic Party MPs will fan out to speak about Bill C-23, the Fair Elections Act, which they say would disenfranchise thousands of voters and favour the Conservatives in campaigns.

And no doubt trying to dodge all these professors.

A week after Marc Mayrand, Chief Electoral Officer of Elections Canada, delivered a detailed and devastating critique of the act before a parliamentary hearing, 160 academics issued their own analysis on Tuesday in an open letter to the government.

Whose indictment of the so-called Fair Elections Act couldn't be more damning.

We, the undersigned — professors at Canadian universities who study the principles and institutions of constitutional democracy — believe that the Fair Elections Act (Bill C-23), if passed, would damage the institution at the heart of our country’s democracy: voting in federal elections.

And it's definitely the most embarrassing thing to happen to Poilievre since Brad Butt claimed he'd personally witnessed voter fraud...

Only to admit he LIED.

Or since the author of a report Polly kept quoting, denounced him for misrepresenting what he said.

But if you think all of that is REALLY embarrassing eh?

Imagine how Poilievre is going to feel when he tries to explain to the Con caucus why he wants to stop the Chief Electoral Officer from encouraging people to vote.

When some of the people who need encouraging vote for THEM !!!!!

Or why he's trying to suppress the vote of some of the Con's most FAITHFUL supporters.

Critics have largely focused on the effect that this change will have upon young voters, who tend to be relatively transient as they relocate for work or school. Largely overlooked is the fact that, according to Elections Canada’s research, the segment of the population that relies most heavily on VICs are seniors living in retirement residences and long-term care facilities.

Golly. With enemies like that who needs friends eh? 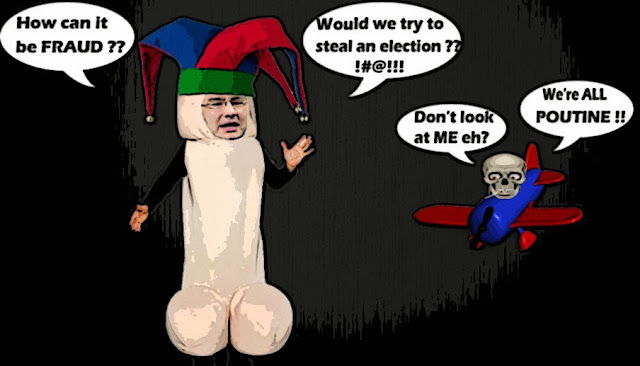 He thought Canadians wouldn't notice or care about his attempts to diddle our democracy. But boy was he wrong.

Bill C-23, the “Fair” Elections Act is one of the most destructive things the Harper government has ever tried to do. It is far more serious than proroguing Parliament at whim, curbing the rights of MPs, or centralizing power in the Prime Minister’s Office.

It’s even more serious than muzzling scientists, statisticians and others who disagree with the government. That’s because the Act is an attack on the most fundamental right of all citizens in a democracy – the right to cast a ballot in an election that is fair and free from corruption and dirty tricks

And that's before we flock to the NDP hearings to let him know how WE feel about him and his bill.

The bill that was supposed to make him, but now looks as if it will BREAK him.

And with a little luck.

Take his boss down with him... 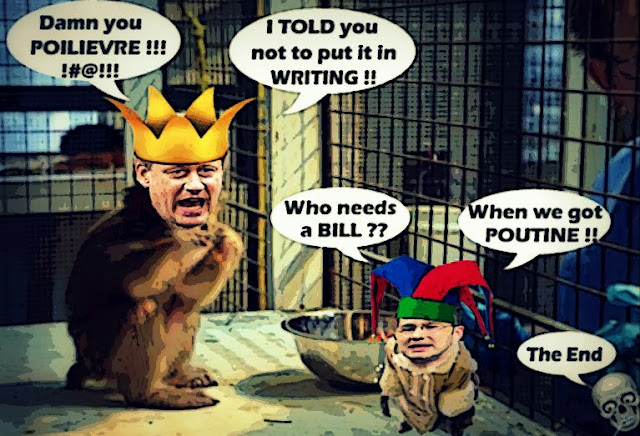 Steve and the gang got cute and decided they would legislate their electoral frauds. But, alas, they were too clever by half. But when you're not too smart to begin with, too clever by half doesn't mean anything.

.. Simon .. Assuming P Poilievre in any way is directing his so called 'Ministry' is probably a mistake ..
but in no way am I critiquing the thrust of your outcry..

If I thought you were a concerned doctor, Simon .. seeking a differential diagnosis & effective treatment protocol
for the blight affecting Canada.. I would advise you to do a thorough history of mood disorders ..
melanomic and melodramatic cancers of the brain, deep narcism, yellow jaundice, greed syndrome
and embedded omnipotence, merging as comorbid delusions of grandeur & splendeur
within The Harper Party.. which is The Harper Government.. which is The Harper himself & only
which proclaims its/his values are The Canadian Values ..
and the Harper Lawyers can dictate or 'control' Election, Constitutional & Environmental Law .. accordingly

It no longer matters what Canadians think or believe in .. need, want or dream of..
the country now serves a so called economist mail clerk from Toronto
who bought everything Tom Flanagan told & sold him..
Harper could as easily have been mentored by a groundhog
and perhaps Canada would have been better served ..

Are there any groups left, he hasn't messed with? Snowmobiling, armed, and land-owners, aside?

Harper has Canada corrupt to the very core. I don't have the words to describe, what I think about Harper. The words I can think of are not printable.

As I am sure everyone knows, the BC liberals work for Harper. However, Harper is no Conservative and the BC Liberals are not Liberals if, they support Harper. Ex BC Liberal Premier Gordon Campbell is Harper's favorite henchman. Harper nearly burst into tears when, Campbell was forced to resign. Campbell twice lied and cheated to win his elections too.

Christy Clark is also accused of cheating to win as well. She too works for Harper, as Campbell did before her.

Harper is spreading his poison, all across Canada. Fair Election Act? Hahahaha. Just ask Poilievre and Brad Butt? Ask Christy Clark and her henchmen. The BC Liberals are Harper's satellite party.

Let the 2 commercials play, then move the time bar to 1:49:00 to watch the interview with Yasmin
Dawood (Assistant Professor at the Faculty of Law, U. of Toronto) re: the Fair Elections Act