Jean-Pierre Kingsley and the Education of Pierre Poilievre 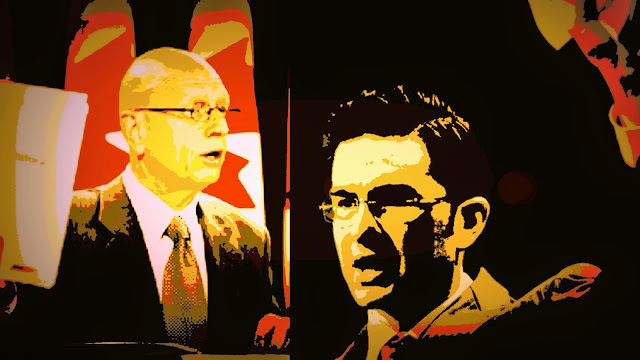 I've always had a lot of respect for Jean-Pierre Kingsley, the former Chief Electoral Officer. So when I saw that he had given the Fair Elections Act an A- I practically collapsed.

Shocked by the thought that a man like him could give such a generous grade to such a foul bill.

And disgusted by the sight of Pierre Poilievre,  using Kingsley's remarks to put lipstick on his pig of a bill.


Because getting a respectable person to flatter his voter suppression scheme must have seemed like manna bananas from heaven eh?

But now I see that Jean-Pierre Kingsley seems to have changed his mind. And would like to make it clear that just because he gave it an A- doesn't mean the Unfair Elections Act isn't hideously flawed.

An elections expert who gave the Conservative government’s controversial Fair Elections Act an A- grade last month now believes the bill shouldn’t pass the Commons as is.

On February 4, the day the bill was tabled in the Commons, Kingsley told CBC’s Power and Politics that “overall, it looks like a good bill.” When CBC host Evan Solomon suggested Kingsley would mark it a B+, the former head of Elections Canada smiled and said: “An A- even!”

But on Tuesday, Kingsley told MPs he agrees with the current chief electoral officer, Marc Mayrand, who gave a scathing condemnation of the Fair Elections Act and warned that thousands of Canadians could be disenfranchised for no good reason if the bill were to pass.

Which as you can imagine has left Pierre Poilievre so deflated, he has stopped beating those cymbals and is now tweeting like a maniac. 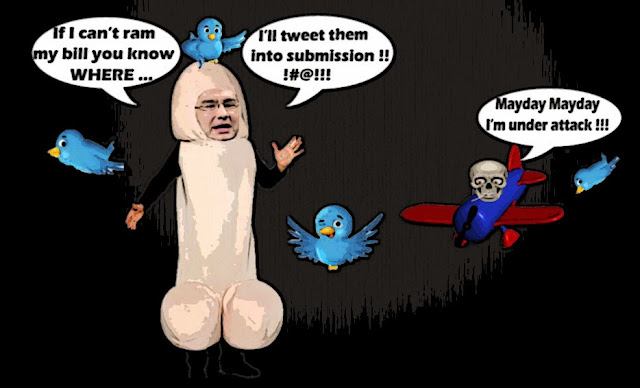 But then he's desperate. The flak is getting heavier and heavier.

There was of course no massive voter fraud, except for the Con conspiracy to steal the last election. And the more his fellow Cons try to help him the more they all look like IDIOTS.

Mr. Hawn told the Commons on Monday, the day prior to the expert testimony on the government’s controversial election legislation, Bill C-23, that during the 2006 federal election period he was “called personally and offered hundreds of voter cards that had been left in apartment buildings and so on.”

Only to spend today dodging reporters.

Mr. Hawn, approached later during a chance meeting outside a committee room, declined to elaborate about his concern, or take questions about the timing of his statement, so long after the election took place.

Informed that the voter information cards were not used as ID in 2006, Mr. Hawn replied: “There’s rules, and how it was used are two different things.”

And will no doubt soon be claiming he is as deaf as Brad Butt was blind....

But then it doesn't really matter what those Con clowns claim or do. When nothing can put lipstick on that foul Unfair Elections Act.

And more and more Canadians are saying enough is ENOUGH.

Like the ones who were out today all over the country letting the Cons know how they feel about their attempts to steal our democracy. 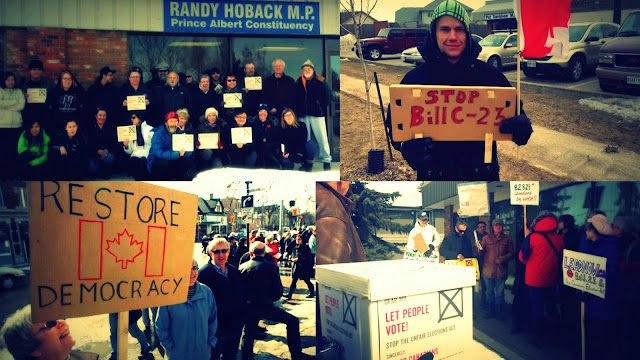 About 70 Greater Victoria residents stopped by Victoria MP Murray Rankin's office Tuesday to deliver a petition opposing the Conservative government's Fair Elections Act. Members from the Canadian Federation of Students, the Council of Canadians and LeadNow.ca collected more than 82,000 signatures – about 20,000 from B.C. – from people rejecting Bill C-23, which critics have dubbed the "Unfair Elections Act."

And those protests will only get bigger and louder, because it's been a long time since an issue has moved so many Canadians.

Three federal party leaders and a reform-minded Conservative MP met with 500 students at the University of Ottawa Tuesday afternoon to talk about how to get more youth engaged in politics and democracy.

And with good reason eh?

The bill is a PIG.

It stinks to high heaven.

And we'll make sure Stephen Harper wears it. 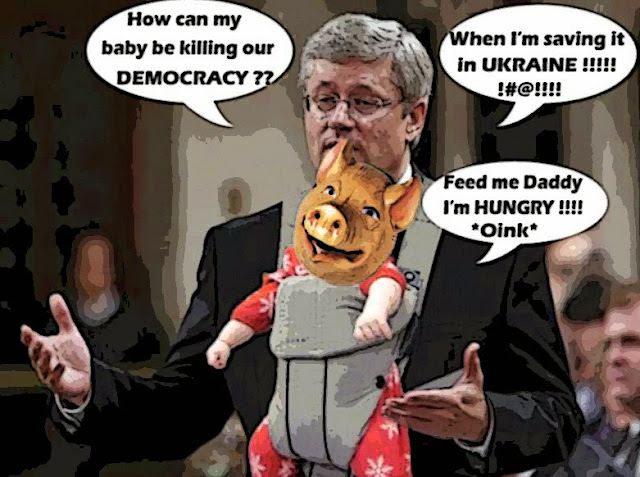 all i can think is- SH is nuttin but a third-rate tin-pot arms dealer with lawyers guns and money for friends--a question i ask every day--where in tf was the vaunted 'professional' voice from on high--when the decision to listen to the drug-addicted, power-mad, vote-buying, goodness-be-damned shells of human beings-was approved--it happened on someones watch. WHERE??? They need segregation and rehabilitaion. At Milhaven.

The corporate conservative lawyers who wrote this stinker should have looked left and should have looked right before allowing this legislation attempt to cross the Trans-Canada. These folks are obviously not the sharpest tools in the shed.

I hadn't read the legislation yet, but I was pretty damned sure that Kingsley was speaking too early. The stuff Poilievre emphasized sounded reasonable, but I knew the devil would be in the details.

I believe Kingsley had a hand in stifling genuine democracy in Haiti a few years back. I've lost a lot of respect for the entire edifice of Elections Canada in the past few years.

I saw the interview of JPK with Solomon on P&P yesterday. JPK appeared defensive and belligerent when asked about his updated views. He seemed to be saying that it was Solomon's fault that he had asked him for a grade so he had come up with A-.

My opinion of JPK has fallen as a result of this. JPK's apparent belligerence suggested that he did not recognize the harm he had done when he had given the Cons, and even Andrew Coyne, ammunition for saying that the bill was not as bad as others had been saying it was.

hi liberalandlovingit....I'm afraid we will not get the answers our democracy requires until we defeat them, and launch a massive inquiry into their no doubt many illegal activities. However, when they are convicted I suggest they be confined in a zoo rather than a penitentiary because I very much doubt that they can be rehabilitated. And better safe than sorry... ;)

hi anon...I'm pretty sure they are sharp, but in all the wrong ways. The kind who use their skills to get around laws rather than uphold them, and who check the sense of decency at the door, in their zeal to turn the insane commandments of the fanatics in the PMO into ugly reality. Or in short...as you put it..skunks...

hi thwap...when I first read about Kingsley's absurd grading exercise I honestly wondered whether he was angling to get his old job back. And I certainly wasn't impressed by the way he blamed it all on the media, when he should have known that the Cons would use his remarks as propaganda. As for Elections Canada I don't know what to think. I'm frustrated by the lack of progress on the robocall scandal. But in their defence they lack the powers to compel people to testify, powers they asked for but didn't get. And Mayrand, the Harper appointee, shredded Poilievre's arguments like a wood chipper. Also, there must be many in Elections Canada who are now probably nursing a grudge, so I'm hoping that extra motivation might cost the Cons one day...

k, simon- but not even 'the frontenac camp' ??--i did know the staff well, some time ago- (because family visits) and they're... ok...it is Club Fed in the con-bubble, after all ;)
the zoo would be a damn sight better imo anyway- than the animals from the wild, jailed- eh?
(...i sometimes wonder how darwin is, you?)

hi anon...yes I think it's safe to say that JP will not look back fondly at this unfortunate episode, this farce. If he hadn't read the report line by line he should have withheld his judgement until he had. You know, I can't grade it until I read it all. And giving it such a good grade without having done that, and playing into the hands of the Cons, is simply unforgivable...