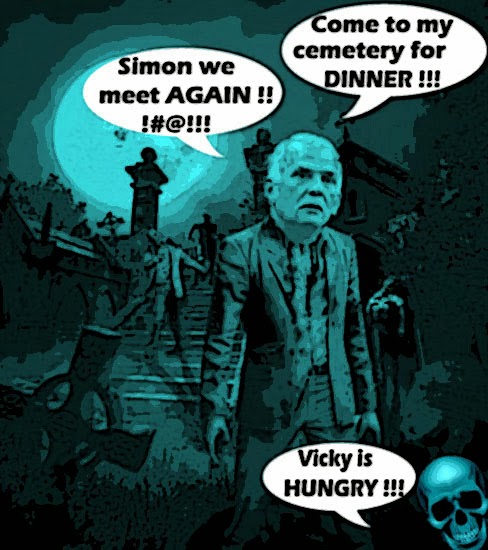 It's a horrible nightmare. I'm driving down a country road in rural Manitoba on a dark and stormy night, when my car breaks down.

And before I know it I'm forced to run for my life.

But I make it into this small hamlet, report the zombie invasion to the bubbah sheriff.

Only to be arrested and dragged before Judge Toews. 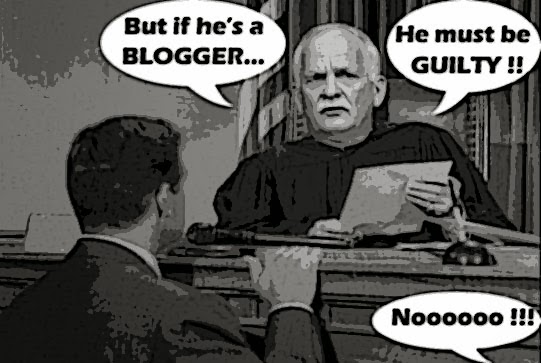 Vic Toews, whose time as one of Stephen Harper’s tough-on-crime cabinet lieutenants earned him a reputation as a bare-knuckled partisan fighter, has been named to the Manitoba Court of Queen’s Bench.

And since I hate the very idea of a police state, I know I'm in trouble eh?

A champion of the Conservative tough-on-crime ideology, Toews pushed mandatory minimum sentences and promoted a stringent Internet law that would have granted police broader powers, including forcing Internet service providers to surrender subscriber information without a warrant.

And of course I agree with Charlie.

“Vic Toews is a symbol of everything that’s wrong with this government’s attitude towards ethics,” said NDP critic Charlie Angus, who described the appointment as “really questionable.”

Because the next full moon isn't until NEXT Friday.

But of course, as far as the Con regime is concerned the timing of the announcement couldn't be better.

On a Friday, after Question Period, and before Parliament takes a two-week constituency break.

May the Garlic God protect the good people of Manitoba.

And as for the rest of us.

You get what you didn't vote for eh? 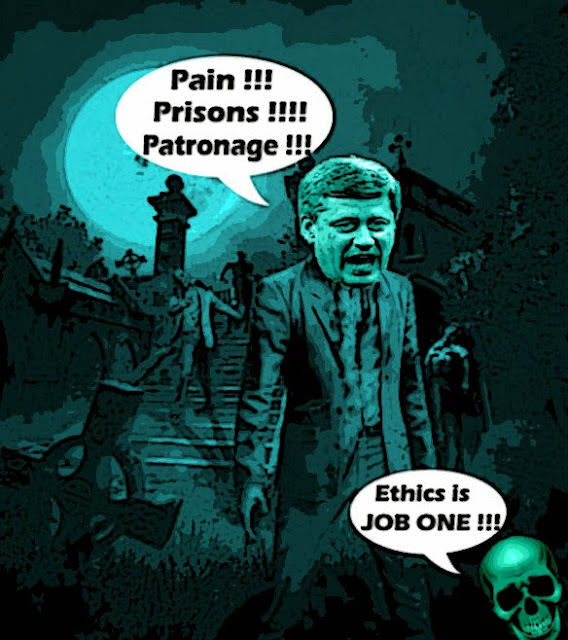 I lived and worked in Manitoba for 12 years, Simon. My heartfelt sympathies go out to the province.

I suspect there is a high profile court case looming on the Manitoba horizon that the cons and their 'associates' can not afford to lose.

If harper hadn't replaced the sitting judges in both these trials by 'promoting' them to higher courts, some of his highly placed friends would be basking in one of his fancy new super pens by now instead of being given a golden handshake from the boss.

It's bad enough that the people of Manitoba have to
endure the Catherine Wheel which is a prairie winter,
but to add Toews to the Bench is the final straw
for those good people.

At least, he's not making a total ass of himself
on the Hill anymore. But the people in the
courts had better watch out for this guy.

Can you shop for a judge in the Canadian legal system
like they do in the Excited States?

I still live here. This makes me sick.

hi Lorne....yes after our and their horrible winter I'm feeling especially close to the suffering people of Manitoba. And they have my sympathies for this ghastly patronage appointment. After his atrocious record in government, Toews doesn't deserve any kind of reward. But it's just another sign of the decadence of the Con regime. And goodness knows we shall use it against them...

hi Ron...I don't know, I can't imagine Toews being involved in any high profile trial, not with his record. With a judge like that criminals could claim he's biased against them for not being religious enough, or threaten to raise the case of the baby sitter to bring the court into disrepute, and get off scott free. No I think this is just a case of political patronage made necessary by the many crimes of the Con regime. Toews knows too much, so he must be bought off before he squeals like Duffy...

Hi David...yes as I told Lorne, after a winter like that one the poor people of Manitoba deserve a break. And now we won't even be able to visit them and offer up our sympathies. On the Politics show today Greg Weston said now he won't dare visit even Winnipeg. And if he doesn't feel safe, how can the rest of us?
My advice to Manitobans, who aren't fleeing the province, is to carry a Bible with them at all times. It may not stop them from being convicted of being in league with the Devil or Justin Trudeau. But it could take YEARS off their sentence.... ;)

hi double nickel....my most sincere sympathies, it really is an outrage. But as I told David there are some things you can do to protect yourself. And of course never ever go outside during a full moon... ;)

On the bright side he will have to recuse himself from any Babysitter motions.

First time I have found " Montreal Simon " so lenient on criminal corruption ... no other equal or better qualified candidates in Manitoba ?

" He was rumoured to be seeking a way out, though, because he was weary of politics, particularly the tricky business of supervising the RCMP. But a second marriage, a young child and an expensive divorce meant that he needed a big paycheque. "

But then he retired in the summer, and sure enough, nine months later, on Friday afternoon, the government appointed Toews to the Manitoba Court of Queen’s Bench.

hi anon....wait I plead not guilty. I may be making fun of him, but hopefully I made it clear that I find this appointment appalling. I mean if I portray Toews as a Con zombie it's not because I want to make him look good eh? Maybe I should have been more serious, but it's the way I am. I'm very serious about getting rid of the Cons, but laughter helps me to survive in this hideous Harperland...