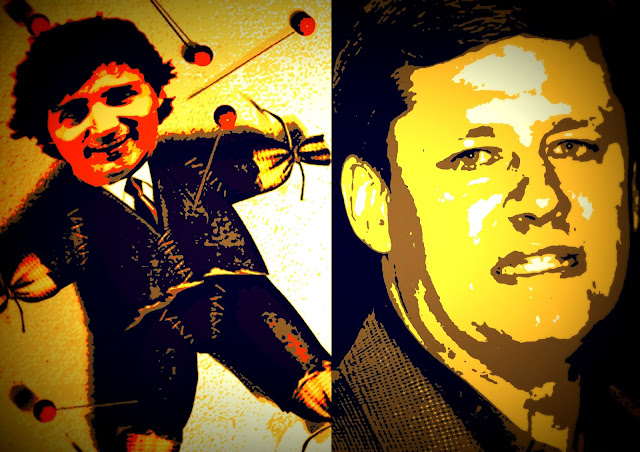 OMG. What a disgusting spectacle. He's at it again. He just can't control himself.

The hate is bubbling out of him like slime out of the glands of a poisonous toad.

He's fired off a bunch of new attack ads at Justin Trudeau.

But this time he doesn't want us to see them.

The Conservative party is blanketing the country with a fresh round of television ads attacking Liberal Leader Justin Trudeau — but unlike past campaigns, it hasn't posted the spots online nor informed its supporters about the big ad buy.

Unlike previous high-profile Conservative ad campaigns, the party has not posted the latest spots online where they can be shared, reviewed and critiqued.

And with good reason eh?

Because the Cons can say what they want:

Cory Hann, a spokesman for the Conservative party, would not agree to an interview Friday but said in an email that "Canadians should know where a man who wants to be prime minister stands on important questions like how to balance the budget, create jobs, manage the economy and keep communities and families strong."

But these latest ads are just as politically pornographic as the last batch of attack ads... 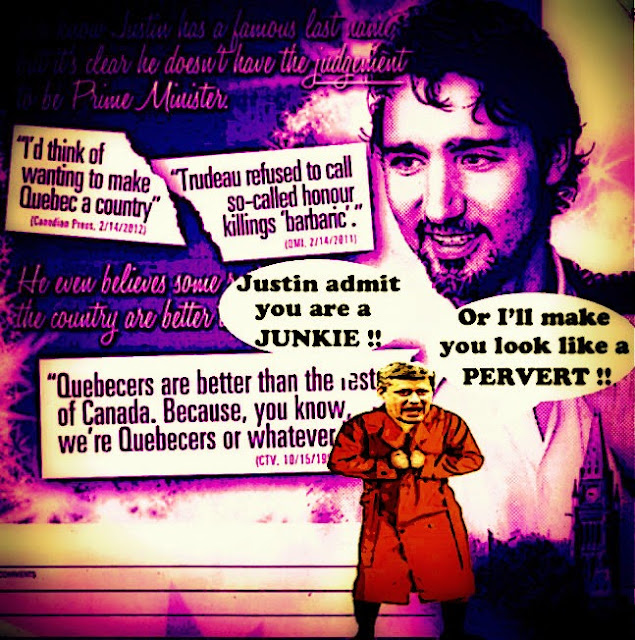 The ones that backfired so badly.

And made Harper look like a ghastly pervert. Just like this latest batch will do as well.

For only a pervert would try to smear an opponent as soft on terrorism or a dangerous drug dealer. 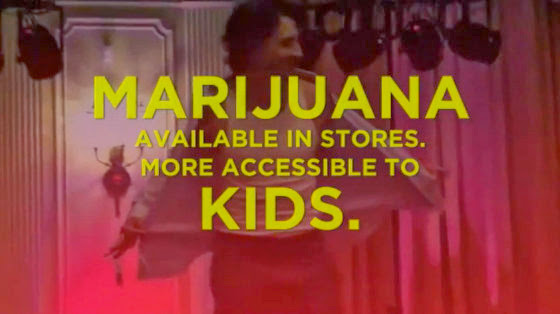 The clip opens with the sound of a school bell and image of children on a bus, then cuts to Trudeau saying: "I'm actually not in favour of decriminalizing cannabis, I'm in favour of legalizing it."

Again, images are shown of Trudeau at the charity striptease as a woman says: "Imagine. Selling marijuana just like cigarettes and alcohol. Justin Trudeau. He's in way over his head."

I mean how low can you go eh? Before they call you a reptile and start feeding you FLIES.

But then Stephen Harper has been smearing his opponents from the moment he came to power... And of course he's desperate.

Despite a steady barrage of Conservative radio ads attacking Liberal Leader Justin Trudeau over the past several months, Trudeau's party is maintaining a healthy lead in the polls over both its major rivals.

Because as even Tom "Strangelove" Flanagan pointed out recently, the personal attacks against Trudeau just aren't working. 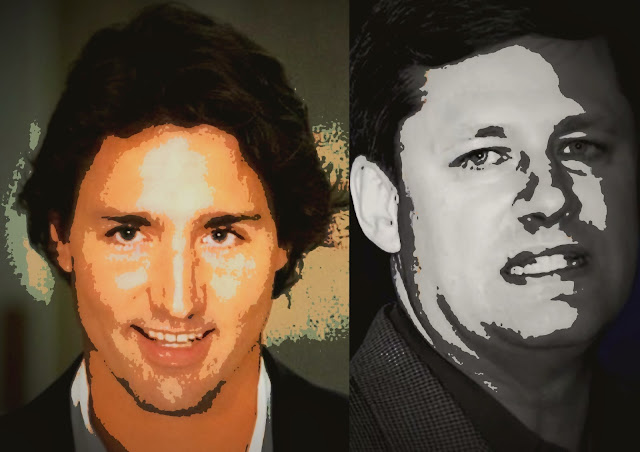 “It’s difficult to attack somebody who is held in higher esteem than you are. Often, the attacks just fall harmlessly.”

And it must be driving him KRAZY.

Because this time our ads will be brutal, they will be personal.

They will make him look like the sleazy monster he is.

They will be soooooo much fun to make.

And they WILL help destroy him... 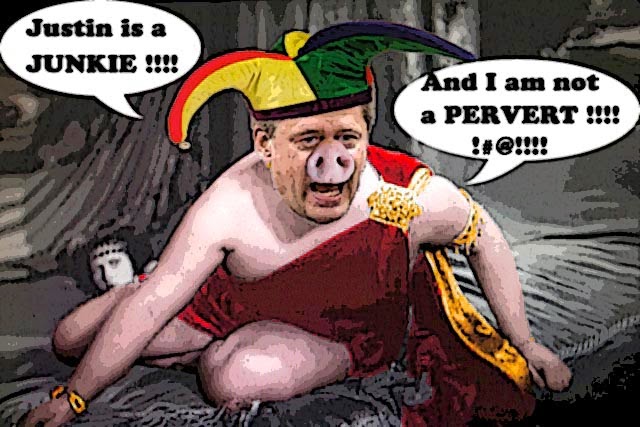 I have been rereading the Shock Doctrine. He's a Chicago Boy and capable of everything they were capable of. I don't like vicious smear tactics, but all we have to do is tell the truth, eh? Whatever it takes to get rid of him. Will defend Trudeau every way I can. And I'm a NDPer.

Oh come now Simon, you know "the little prince" is nothing but a laughing stock and it won't take the rest of the country long to figure that out too! lol

Harper will use every dirty tactic in the book, to cheat to win this next election too. Harper is the most repulsive, disgusting Nazi scum of a leader, that Canada has ever known. Harper is everything decent Canadians despise.

Harper's henchmen are, useless, gutless, spineless wonders. Every time Harper pulls their strings? They dance to Harper's tune. They most certainly lack, self respect, decency and honor.

I'm an NDP'er and I say no to those nasty attack ads. At the same time, I continue to be an NDP'er and not a Liberal pretending to be one.

Flanagan's views on this; and the First Nations 'problem' to Harper: two views I agree with. I can't believe I just wrote that.

The ad with the legalization of weed, well I'd counter that with Colorado. Looks like a good business and rakes in taxes (25%) for the state. Clean, organized, professional. The picture of "the kid" walking in taking of his shirt, oh, my god, he looked hot. Don't even remember what the cons were trying to say, just looked at "the kid" and thought that is going to work for the federal Liberals.

Don't know if Trudeau is in over his head, but we all know oil can is way over his head for corruption, free spending of tax $s, destroying things Canadians have treasured for years. Oil can harper is way over his head when it comes to the Armed forces and Veterans mental health. Young Trudeau, isn't in over his head. He can hold his head up high because he hasn't been hurting Veterans, their families, First Nations, scientists, science, women's groups, health care.

Always voted NDP but Trudeau would get my vote if strategic voting became a factor in my riding. Trudeau maybe young, but some of those around him have lots of experience. Seeing Stephan Dion sitting behind me, is all I need to know we would head into the right direction.

Hello Simon, reading some of the comments on your tread by the anon are sounding a lot like Harper's bullies and are just as bad if not worse then he is.They sound about as childish as Harper and his goons. Not nice.

hi anon 9:18...we don't need to smear the Cons, we only need to tell the truth about them in the harshest way possible. We need to condense all their atrocities into a powerful and understandable message that can break through the complacency of so many Canadians. If we do that well it should be more than enough...

hi anon 1:40 pm...I'm not sure what you're getting at. I don't think you need to be a Liberal to be disgusted by the Con attack ads against Justin Trudeau. It's a matter of human decency. And if you're accusing me of being a Liberal while pretending to be for the NDP you're barking up the wrong tree. I have also criticized the attack ads aimed at Mulcair, and while I may not be rabidly partisan, I have always voted for the NDP, and I attack bullies where I see them...

hi anon...look I don't support a lot of Justin Trudeau's policies, but if I was a Con like you I would be worried. Because what the polls tell me is that "the little prince" is making King Harper look rather old and tired. And that Canadians want change so badly they are willing to forgive him a lot. So I wouldn't count him out just yet, or you might end up looking rather foolish...

hi gingersnap...I share your dislike of Harper, although I refuse to call him a Nazi, because it devalues the horror of that word. But he is acting like a fascist and he will eventually pay for it. For that is the most important thing. Not how bad he is, but how we must defeat him...

hi liberalandlovingit...yes it is a rather unpleasant feeling isn't it. But then Strangelove has been banished from the court of King Stephen for spilling the beans about his rise to power, so any time he criticizes Harper I'm all ears... ;)

hi Edstock....thanks for that. I found it very therapeutic. Although a fire hose would be better... ;)

hi e.a.f...well the weed ad is a joke, considering that the Cons are also softening their position, as articulated by the Minister of Binge Drinking Peter MacKay. As for who to vote for, I live in a solidly NDP riding so I'll be voting for them in the next election. But if Justin Trudeau became Prime Minister I'd be happy too. Because all I live for is the downfall of the Con regime, the worst and most destructive government this country has ever known...

hi anon...look I am only responsible for what I write. I don't want to start censoring comments unless they advocate violence or bigotry. I encourage all who comment here to be as positive as possible. I am always polite with everyone, whether I agree with them or not. I like to think I'm setting some sort of example in that regard. But more than that I cannot do....

...I hope people in my community will stand up and flip this riding. That is the goal of my campaign. Amazing, the people you can talk to on foot, or by bus! We were NDP here, for decades. When we manufactured the best farm equipment around, and fed and educated our children on a living wage...remember that? Then Liberal for awhile. Now? I'm disgusted with my representative- the hardly honourable public servant/Harper-owned,Phil McColeman. I will vote for whomever has the best chance- Danielle or Mark, of letting intelligience, wisdom, and fact- return to the drivers seat.