The Con Regime and the Attempted Muzzling of Marc Mayrand 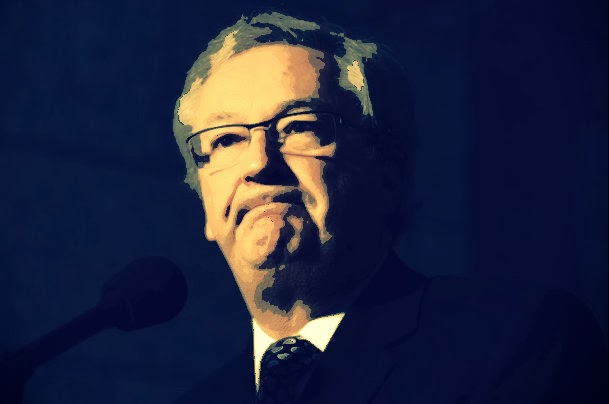 It couldn't have been a more revolting spectacle. Canada's Chief Electoral Officer Marc Mayrand called to testify before a House of Commons committee.

To talk about the foul voter suppression bill known as the Fair Elections Act, and the Harper regime's attempts to muzzle him.

Only to have the Cons try to muzzle him again, by breaking a deal they had with the opposition, and scheduling a vote in the Commons, just as Mayrand was preparing to address the committee.

Which had even the MSM gasping in disbelief.

And when Mayrand finally got to testify, what he had to say couldn't be more damning.

"My biggest concern is that, at the end of the day, Canadians will be denied the right to vote. Even though they are citizens, qualified and perfectly legitimate," Mayrand told reporters after speaking to a House of Commons committee.

"We have to be careful because in the next election, if those rules go through, you will see in your riding how many people will be sent away."

Because when those who want to vote cannot, we are no longer living in a democracy.

Of course what Mayrand couldn't say, was that most of those who could be denied the right to vote, just happen to include those most likely to vote against the Cons.

As Ed Broadbent does here.

Inspired by the voter suppression tactics used by the Republicans to disenfranchise marginalized groups in the U.S., the new election law would make it harder for certain groups to vote. The law would end the ability to “vouch” for the bona fides of a neighbour, a tool that allowed 120,000 voters — disproportionately aboriginal, youth and seniors — to cast ballots in the last election.

Having spent more than two decades in the House of Commons, I can think of no prime minister who has been so focused on undermining electoral participation and public debate.

But then some things no longer have to be said. Not in a country with a Prime Minister like Stephen Harper.

Who when asked by Tom Mulcair why his foul gang voted overwhelmingly to let the Con clown Brad Butt off the hook for blatantly lying to Parliament. 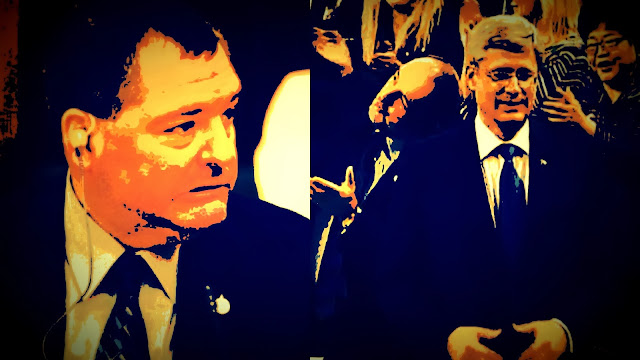 Had the nerve, or the lack of decency, to say this.

Not in a country where more and more ordinary citizens now know only too well the true nature of Harper's thuggish regime.

Harper and his like may think they are manipulating their power cleverly, but in the end they are writing their own epitaph.

And let's hope those feelings lead to the biggest voter revolt this country has ever seen.

Because although I don't agree with this controversial cartoon. 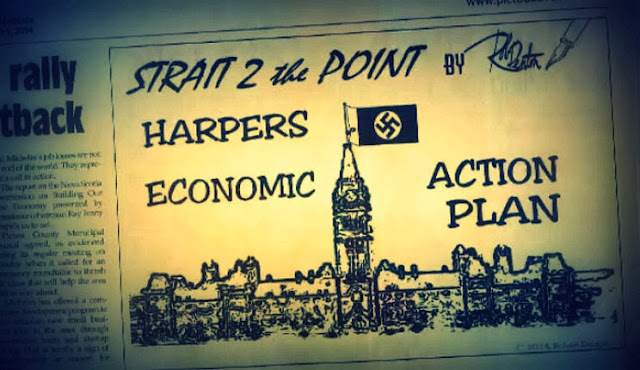 For the Cons aren't Nazis.

They ARE acting like fascists and they MUST be stopped.

So even if you are as tired as I am of this filthy Harperland, this moral squalor, this never-ending democratic nightmare.

And I'm so tired I can hardly read the words on the screen in front of me.

We must find the strength to shout this out so all Canadians can hear it: 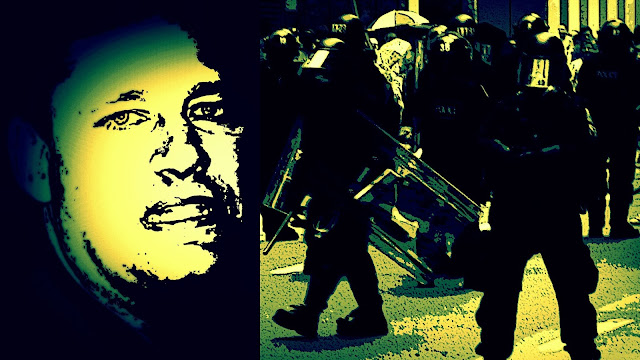 Did any on truly expect anything different from this bunch. This is just the icing on the cake for them. They hope this will keep them in power for a very long time. it may well do just that. Given what harper and his ilk have wrot upon this country, no wonder Quebec may leave.

.. Stephen Harper is just not into Canada .. and it seems there are plenty more lizards just like him ..

Simon a call to arms, one more piece of democracy theft is ready to roll. They are hiding the old Vic bill in the new On line bully bill. Stop them, sign up here.

Dear Simon! A wonderful article! Thank you so much for all you do for the cause because it is a cause. It's our cause. All of us who care for Canada and who long to see Harper and his cronies defeated at the polls. You say you feel tired. Just know that you are loved and appreciated. Perhaps this will keep you going. There are times when I get so angry that I become literally nauseous. But I talk to myself and revive myself because I know I have to if I am going to keep on fighting this evilness that has invaded our beautiful Canada! Remember Flanders Fields when you start feeling down ("Take up our quarrel with the foe. To you from failing hands we throw the torch. Be yours to hold it high"). Dear Simon, to you and all fighting Canadians, I say "Let us hold high our torch " because Harper and his cons have become Canada's biggest foe. This group of people are destroying our beautiful country and they hate the Canadian people. These people are power hungry monsters and we need to keep fighting them. Sooner or later their defeat will come because all through history, monsters like Harper have been destroyed. He will be no exception. His time is coming! Let us hold on to that!

...beautiful, Anon...loved and were loved. Mr. Mayrand's testimony was given with what I thought was- disturbed and disgusted resignation. We will fight for them.

Con MP Scott Reid posed a few questions to Mark Mayrand after his introductory remarks. Today I sent an email to Reid regarding the actual number of cases where someone was charged and convicted of voter fraud. Reid's legislative assistant (Dennis L. Laurie) replied:

******
Thank you for contacting Mr. Reid. I have brought your email to his attention. On his behalf, I can provide you with the following links:

The link below leads to a table that includes all charges laid under the Canada Elections Act and Referendum Act since February 2011:
http://www.elections.ca/content.aspx?section=com&dir=charg&document=index&lang=e

This link is to Elections Canada's Sentencing Digest Archive, which details all convictions under the Canada Elections Act and Referendum Act from February 2011 back through the 1992 Referendum:
http://www.elections.ca/content.aspx?section=com&dir=charg/sen&document=index&lang=e

So since the 1993 election, there have been only 8 convictions for voter fraud-- an average of one conviction per election.

the only ones perpetrating a fraud in this country are the federal Conservatives. Lets see we had 8 voter fraud convictions. Now how many convictions will there be once the Con senators go to trial. If we follow the cons thought process we will need Con suppression laws. O.K. that works for me.

hi e.a.f... I don't expect anything from that disgraceful mob, but attacking our democracy with that foul bill really is the limit. And don't worry they won't get away with it. I predict this scandal will do them great damage by destroying what's left of their credibility, and making Canadians trust them even left. And don't worry about Quebec either, it's not going anywhere. I'll explain why in a post as soon as I can summon up the energy...

hi salamander...well of course you would know more about lizards than I do. ;) But yes, if you study Harper's record from the time he was in high school, all he's ever done is seek to destroy things. I'm convinced he gets more pleasure out of that than he does from building things.Which also explains his total lack of imagination and vision. He's more like a rat than a lizard, gnawing away at everything we hold dear. But the scent of corruption will lure him into a trap sooner or later, and it will be his downfall...

hi Steve...yes I haven't forgotten that fake cyber-bullying bill. Bullying is a very big issue for me. The biggest reason I despise Harper and his gang. So we should definitely sign that petition and warn as many Canadians as possible why it's so dangerous...

hi anon...thank you for your kind comments. And you're absolutely right, we must not let fatigue or depression stop us from working as hard as we can to take our country back. When I was at McGill I worked nights at the Royal Victoria Hospital. In the old wing there's a small shrine to John McCrae who worked at the hospital, and in the darkness of that place I could feel his presence, along with the ghost of my hero Norman Bethune. Both of them wouldn't have put up with the Con regime, and neither will we. As I like to tell everyone, the harder the struggle, the sweeter the victory. And we will remember this one for the rest of our lives...

hi liberalandlovingit...I only saw parts of Mayrand's presentation, but I was proud of the man.The Cons are trying to muzzle and humiliate him, but in his quiet very Canadian way, he tore their foul bill apart. Destroyed every one of their arguments. When the history of these dark years is written there will be many quiet heroes like Marc Mayrand and Kevin Page, who at a time when their country needed them did not let it down...

hi David...thanks for offering up all those links on this blog so readers can educate themselves further. And yes, Poilievre's claims of widespread fraud are fraudulent. There are only a handful, and most problems are administrative in nature. Mayrand is right when he says the biggest problem is low voter participation. And if we are going to be sure to win the next election, we're all going to have to do our best to encourage more Canadians to vote. My guess is that it will be higher than any in recent history, but the higher the better...

hi e.a.f. you're right and that's what makes it so outrageous and so surreal. The Cons going after imaginary fraudsters while they are the real problem. I'd say they have a nerve, but I think they're just desperate...