The Con Clowns and the Crisis in Ukraine 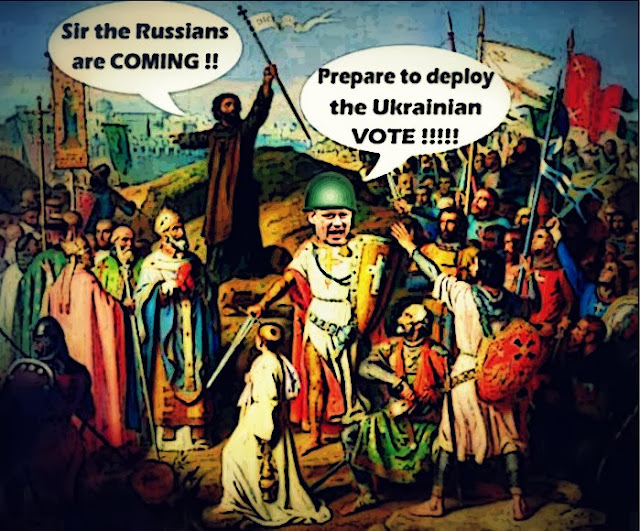 If the crisis in Ukraine wasn't so ominous, the sight of the Harper Cons mobilizing for war would be absolutely hilarious.

Stephen Harper sucking in his gut, puffing out his chest, inflating his propaganda balloon, talking tough to the fascist dwarf Vladimir Putin. 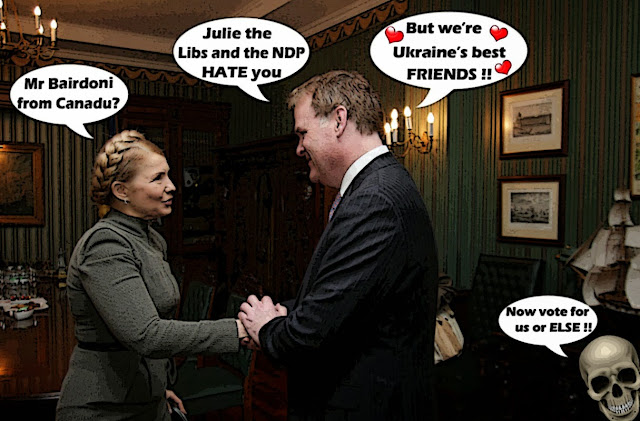 Cheap, shabby Tory politics. That’s the best that can be said about Prime Minister Stephen Harper’s cynical decision to show the Canadian flag in Ukraine this week by sending a nakedly partisan delegation that includes a Conservative cabinet minister, an unelected Tory senator and two Tory backbench MPs – but not a single representative of the opposition parties.

It’s appalling to see the Conservatives exploit Ukraine’s national struggle for their own narrow interest.

Standing up for democracy in the Ukraine while killing it at home.

Making it sound like the Cons are leading the charge to freedom... 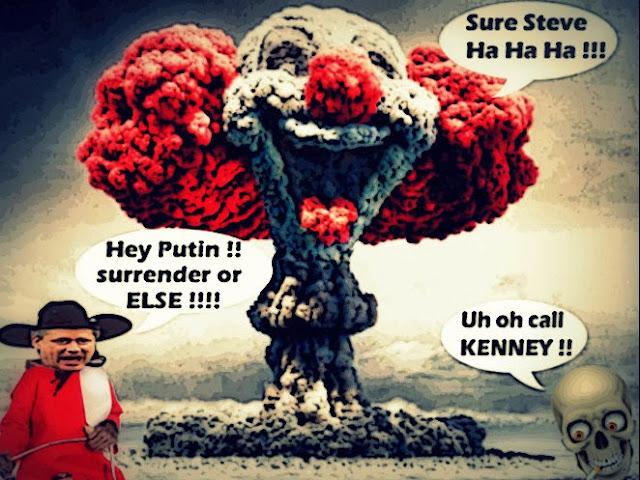 When in fact, thanks to those ghastly Cons we don't have a shred of moral or diplomatic influence left in the world.

How could we? When we are stooges of the Israelis in the Middle East, servants of Big Oil everywhere else. We're turning our foreign aid program into an aid program for mining companies.

The federal government is providing added funding aimed at boosting transparency in the extractive sector, a sign Ottawa’s foreign aid efforts are becoming increasingly focused on the mining industry.

This Con hog is our most famous ambassador.

And the best we can hope for is that Harper and his shabby shameless posse of Con clowns don't make a bad situation worse.

Because it's more complicated than they would make it appear.

It's a crisis that could easily lead to a horrifying civil war, or a terrifying superpower confrontation.

A crisis where as if things weren't bad enough, the ranks of the good guys include some nasty neo-nazis. 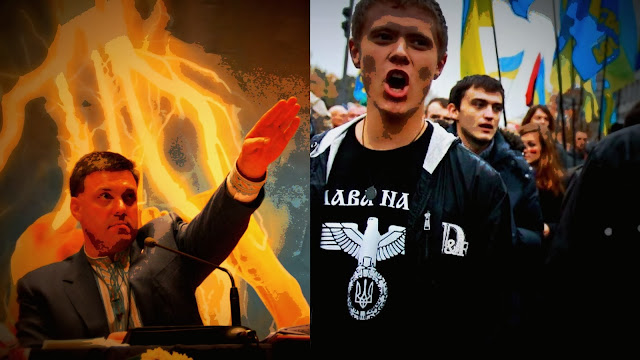 Yahnybok and other party leaders have been accused of making numerous anti-Semitic and racist remarks. In 2004, Tyahnybok urged his party in a televised speech to fight “the Moscow-Jewish mafia ruling Ukraine.”

Another party official, Yuriy Mykhalchyshyn founded a think tank called the Joseph Goebbels Political Research Centre, which was named as a tribute to the notorious Nazi propaganda minister.

And the Cons are so dumb and incompetent, and so fixated on their crass political interests, they could end up jumping into bed with them.

And then of course there's the fascist dwarf Putin. Who I thought was the big winner of the Sochi Games. At least judging by the enthusiastic way most of the world kissed his ass. And forgot his victims.

But who apparently still feels like a loser, is willing to risk EVERYTHING.... 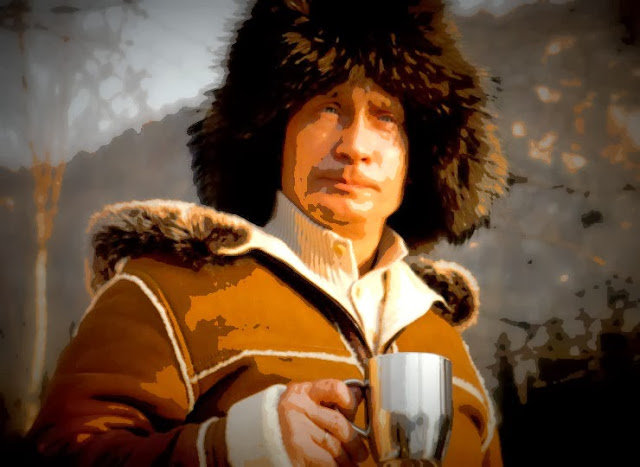 And that is what is so worrying about Putin’s latest moves. They show that he is clearly a desperate man, willing to make a clean break with Ukraine and Europe, risk an acceleration of Georgia’s membership in NATO—an event that he wants to avoid almost as much as losing Ukraine—cripple his own economy and suppress yet another indigenous population. All for little tangible gain.

It appears that Putin feels that he has nothing left to lose.

And in his present state of mind, and after a few drinks, is clearly capable of ANYTHING.

So the the last thing the world needs are the ghastly Cons wandering around Ukraine, talking trash, trying to stir things up or pour gasoline on the flames, just to score cheap political points back home.

Because once we were noble peacemakers, but now we're just shabby clowns.

Oh boy. We really do owe the people of the world an apology for having inflicted the Harper Cons upon them, and allowing them to threaten their future as well as our own.

But the best way to make it up to them is to fight the Con regime harder than we ever have before. In Parliament, in our communities, on the streets if necessary.

Defeat them, crush them, jail them if possible.

Before their crassness shames us further.

And his madness destroys us ALL... 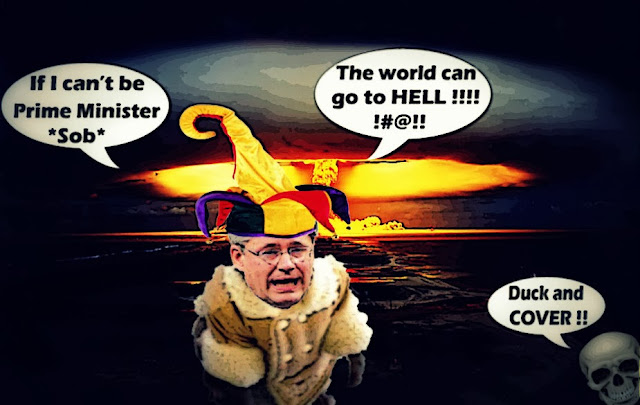 Justin may have been correct about Putin being so pissed about loosing the hockey games, he invaded Ukraine. Like who didn't see that coming. Putin was just waiting for the last of the athletes to leave Sochi. Given his attitude towards the disabled he doesn't consider that part of the Os. So now Putin's in Ukraine. There is really nothing the other countries can or will do about it. The Ukrainians will fight this out amongst themselves. The country is almost bankrupt and it might well be due to corruption. Do we want to give money to another group of corrupt officials and then have it taken over by Russia? Not so much.

The only real issue of concern here is both Ukraine and Russia have nuclear weapons. We REALLLLY need to keep an eye on that or things could get very ugly in Europe. Over here to, if all your European relatives decide to come for "a visit" until the unpleasantness is over.

sending Baird over there was plain stupid. like who noticed. most of them in the Ukraine would have just wanted to know how big the cheque is. Not all is going to be well with the "new government" so Canada ought to stay home and save the money until we see how things shake out.

Basically, everyone can rant and rave, but Putin is going to do what Putin wants to and not much is going to stop him. Saying western europe isn't going to buy his oil and gas. Ya, well good luck with that one. western europe needs the stuff.

The only real thing the Europeans are going to do is make sure they don't get the Ukrainian refugees in their countries. I'm fairly sure oil can and bairdy don't want a few hundred thousand Ukrainian refugees headed this way either. That is really the true test of how countries feel about war in another country, will they take the refugees.

Loved the first cartoon on this article, made me laugh.

It has been suggested that Vladimir Putin and Dmitry Medvedev represent a modern Russian duumvirate, sometimes referred as "tandemocracy", a portmanteau of "tandem" and "democracy".

In 8 years, we have gone from the Centrism of the Liberal Party, and under Harper are now closer to Reactionism than to Conservatism. Some may argue we are already in the Reactionism stage.

If Harper's policies are allowed to proceed unchecked, the logical outcome would be a fascist petro-state.

The last thing Ukraine needs is Harper whipping up tensions to serve his own craven power addiction.
http://thinkingaboot.blogspot.ca/2014/03/crying-in-crimera.html

oil can has also "expelled" the Russian Ambassador and had the Canadian ambassador come home. How stupid are those cons? when the going gets ugly you keep your Ambassador where he is. He can actually do work that is worthwhile. Of course the cons don't see anyone as being able to do anything, besides themselves. centralization of power. Calling Canada's Ambassador back isn't the smart move either. Does oil can actually believe Putin cares, whether we have our ambassador in Moscow or not? Putin doesn't care about anything but Putin. Had the Canadian Ambassador remained in Russia, they could have maintained proper contact with Russia/Putin and worked at a secondary level to resolve the issue, without "grand gestures". If Putin is going to agree to anything, it will have to happen in such a manner as making him look good. Pulling ambassadors doesn't achieve that. oil can needs to understand Canada isn't that important anymore on the world stage.

Putin gets the G8 meeting in Sochi. what would have worked much better is phoning the other 7 countries and discussing, moving the meeting elsewhere and not invited Putin. He wants to belong to that club. Threatening to remove his membership in this particular club, would actually have done something to send him a message. Or they could move the meeting and still invite him, and then have the other 7 leaders have a "chat" with him.

Perhaps it is time for the President of France and Ms. Merkel to have a chat with Putin.

Simon I'm all for you being against Harper etc but your views about geo-politics is extremely naive.

If you want to play with the big boys then you need to step up in regards to your sources of information.

I suggest you start here: http://vineyardsaker.blogspot.co.uk/

Same to all the other people posting here who have no clue to what's going on regarding Ukraine, Russia, USA, Nato and of course our US/Nato puppet harper.

I just checked out Michael Dee's link, above, and I'm not impressed. The writer of that blog repeatedly refers to Obama as the "idiot in chief", and claims that Yanukovych was a legitimate leader overthrown by Nazi thugs at the behest of the West, which is, lo and behold, Russia's claim, but is at best a gross oversimplification and at worst an abject lie. Yes, there are some Nazi thugs involved in the overthrow, but that's only a part of it. Millions of ordinary, non-Nazi Ukrainians also strongly opposed the regime, and made up the bulk of the protest movement.

Frankly, I don't trust the blog Michael Dee linked to at all. It almost seems like its anonymous writer is a closet Putin supporter.

Idiot in chief is far too easy on Obama the psychopath android liar. He's worse than Bush.

If you want news that isn't western mainstream media then go to www.rt.com