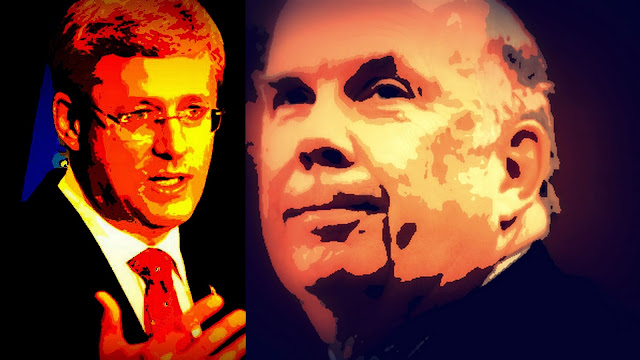 I can hardly believe it, so disturbing, so absolutely insane is the idea.

Stephen Harper has just been slapped in the face by the Supreme Court for trying to appoint a judge who wasn't qualified for the job.

He has been humbled and humiliated by a 6-1 decision.

But instead his foul Con regime won't rule out making another attempt to appoint Marc Nadon.

“I think all the options are on the table. The Prime Minister will be looking at those,” MP Bob Dechert said on Global TV’s The West Block when asked about the possibility of trying to get the 64-year-old judge appointed to the Supreme Court through other means.

By jimmying the system, to let their man in through the back door, like a thief in the night.

Even though that would be tantamount to declaring war on our judicial system, the appointment could be tied up in the courts for years, leaving the Supreme Court  shorthanded.

Nadon's legitimacy could be challenged by the first person to appear before him.

“Would the PM risk the Supreme Court having to deal with a challenge to Justice Nadon’s entitlement to sit in the very first case to which he was assigned?” asked McGill University professor emeritus Roderick Macdonald.

Leaving the other Supreme Court justices no choice but to order him off the bench. 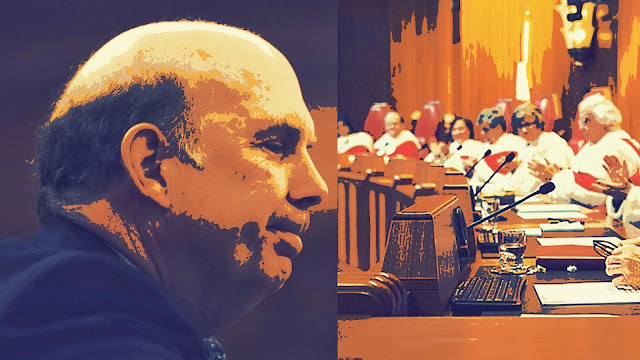 Which would trigger an all-out constitutional crisis.

And would at this time play into the hands of the PQ separatists, by giving them the ammunition to claim that Canadian federalism is stacked against Quebec.

When the Supreme Court has just so admirably proven it isn't.

It's so irresponsible, and so dumb, and so outrageous, it's almost unbelievable eh?

If I didn't think that Stephen Harper would secretly welcome a PQ victory and a referendum, so he could pose as Captain Canada to try to make Canadians forget the scandal ridden record of his corrupt government.

And if I didn't know that he has always hated the Supreme Court for having had the nerve, among other things, to declare that gay Canadians had human rights. 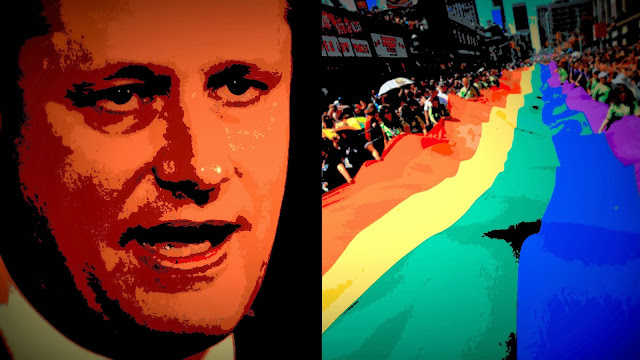 Stephen Harper says some judges appointed by the federal Liberals are activists working to promote their own social agendas, statements that drew heavily from his tenure in the old Reform and Canadian Alliance parties.

Mr. Harper's former Reform and Canadian Alliance allies have cried loudly about judicial activism, with many complaining that liberal judges have imposed such things as same-sex marriage upon an unwilling populace.

Which at that time had Irwin Cotler, who would later be targeted by a foul robocall campaign, protesting loudly.

Liberal Justice Minister Irwin Cotler responded with a scathing attack on Mr. Harper, arguing that his opinions are unfit for a man who aspires to lead the country. "To me, [it]is irresponsible for a political leader to be impugning the independence and the integrity of the very institutions he should be protecting," he said.

And saying what every decent Canadian should be saying about Harper today.

He is unfit to be the Prime Minister of Canada. He would destroy the institutions he should be protecting. He would leave us helpless at the mercy of his rogue regime. And he is totally out of control.

Oh boy. You know back in the days when he worked for Preston Manning, the parson once remarked that Harper thought he "owned the truth."

And after eight sordid years in power he clearly believes that the truth is what he says it is.

But now it's even worse, or even crazier.

And this lawless dunce must be removed from office by whatever legal means necessary.

Before he debases us further... 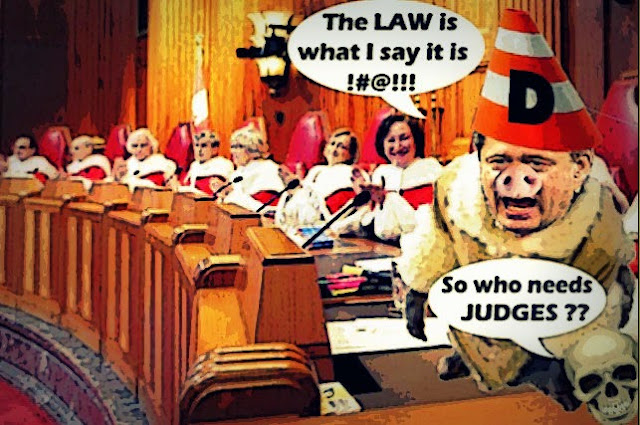 The constitution was written by people much smarter than Harper. They wrote it, to prevent the very things Harper is currently trying to do. Part of the Supreme Courts job is to ensure the Canadian Constitution is not violated by its citizens but also by its various forms of government. The people who sit on the Supreme court of Canada aren't radicals. They are pretty conservative as things go. They are simply interpreting the laws of the land and how it all fits in the Constitution. Now if stevie wants to change the constitution to suit himself, perhaps he'd like to go visit with Mr. Putin for the next 10 yrs or so.

If the Conservatives try to put Nadon on the bench by first anointing to a lesser court in Quebec, Quebecers will truly have a right to be pissed. But then if Harper wants to do this with a Supreme Court justice who is supposed to meet qualifactions, what is he going to do next, ie. if a judge needs to be appointed from other regions in Canada. We saw what Harper did with the Senate. I guess this will be the next scandal. Perhaps we all need to leave Canada. Harper can have, o,k. no Ontario, if they leave, he could set up in Alberta or join Putin. or China.

If he does this it will confirm he is a Seperatits

.. Simon .. don't miss the boat ..
What is Nadon's special area of judicial expertise
that may make him of critical judicial use to Stephen Harper & Joe Oliver.. ?

Supertankers (Diluted Bitumen & LNG), Corporate Liability & Insurance,
Lack of navigational aides, Acts of God plus bad weather and sharp reefs,
China oversight/control, Liberian Flagged vessels, partial cleanup with Costs in the TRILLIONS ..
due to loss of life, loss of jobs, damaged environment and ecosystems
and .. those secretive trade deals Tony Clement will inform Canada about
when he is told to do so by Stephen Harper.. (National Security at stake as always, sez Stevie)

Lord knows, we've never had a shipwreck on Canadian shores .. never ever.. can't happen
We got the raydar and sownar technology, you see... and Steve will beseech gawd re the weather and tides
and we gots the 35 year old Aurora marine & arctic patrol aircraft to save the day (till 2030 !!)

How's your dad's 1979 Cadillac running Mr Harper ... ?? Oh .. long since scrapped ?
But you're fine with slashing the budget re long range patrol.. stalling on replacement aircraft
Letting those kids fly in decrepit 1979 airframes.. just like the aged marine rescue choppers...

You're a complete clown, dude.. so far out.. you're ethically adrift in HarperSpace
a place where nothing sentient or responsible.. can exist..
And let us know when you get back from there ..
or Ukraine.. or saving China.. or Israel.. or the G7 or G8

A country called Canada is calling you out ..
not calling out to you .. .. You get the difference ?