The Wonderful and Neverending Pounding of Pierre Poilievre 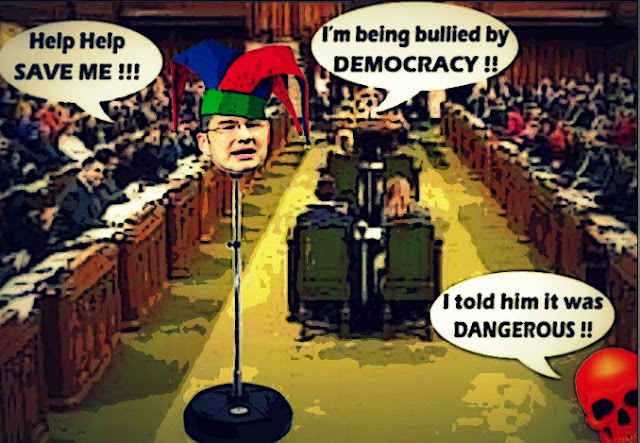 The one good thing about the foul Fair Elections Act is the way it has transformed Pierre Poilievre into a parliamentary punching bag.

Because it seems that every day somebody is taking a shot at him and his bill.

And today it was the election expert Harry Neufeld's turn to tell Poilievre to amend the bill or KILL IT.

Harry Neufeld, the author of the report often cited by government officials to support its proposed changes to Canadian election laws, says the government has to amend its election reform bill or kill it.

The elections expert also fears half a million people could be disenfranchised based on changes included in the Conservative government's Bill C-23, he told reporters following his appearance before the procedure and House affairs committee Thursday.

Which of course must have been particularly painful or embarrassing for poor Pierre, since he has been quoting Neufeld's report to claim that vouching and voter information cards are responsible for widespread voter fraud.

Only to have Neufeld accuse Poilievre of misrepresenting his words, tell him there is no evidence of widespread fraud. 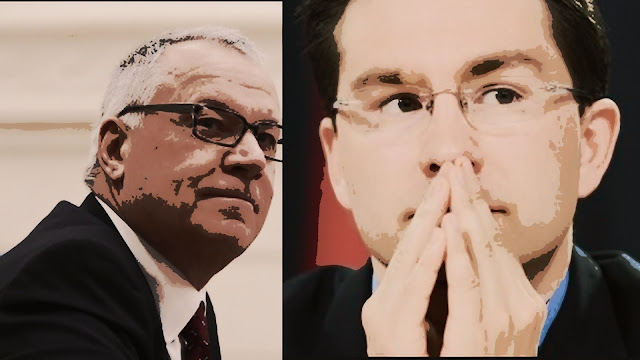 And warn that eliminating voter information would prevent hundreds of thousands of Canadians, the kind who don't usually vote for the Cons, from proving where they live.

Elections Canada piloted a program in 2011 that saw 400,000 people use their voter information cards as proof of residence. The agency allowed students, on-reserve First Nations voters and people in long-term care facilities — many of whom don't have a driver's licence or other proof of residence — to use the cards to prove their addresses.

"If those 400,000 people cannot use the [voter information] card to prove their address, what's their option to be? There's no ability to vouch, according to C-23, so they're disenfranchised," Neufeld told reporters following the committee, calling the voter information card "a valid piece of ID."

Because you can see the problem here.

If you choose option 2, these are the only original documents with a name AND an address... 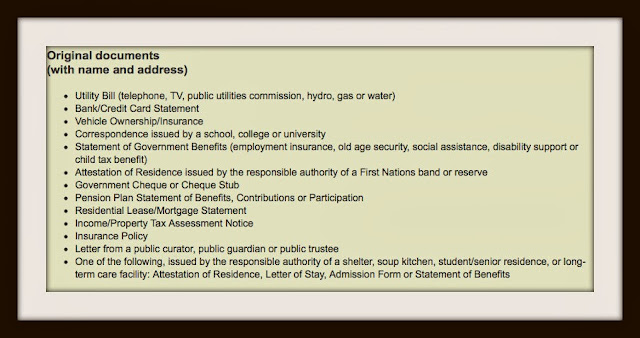 And many people just don't have them.

And this theatrical attempt by one of the Cons on the committee to prove the contrary, couldn't have been more embarrassing.

During the committee meeting, Conservative MP Erin O'Toole pulled out his wallet and rifled through his identification, repeating "Acceptable" after every piece on the list of 39 forms of identification Elections Canada accepts.

"Which one's got your address?" Neufeld asked him. O'Toole didn't answer.

But then Poilievre knows exactly what this bill is all about. 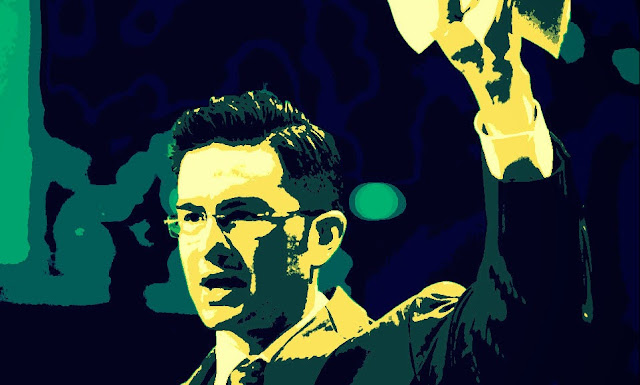 It's a foul scheme to suppress the vote, just like his fellow Republicans are always trying to do in the United States.

It's an attempt to make it easier to steal the next election, and by not giving Elections Canada the powers it requested, make it almost impossible to prosecute the Con criminals who tried to steal the last one.

And all you have to do is watch Poilievre's interview with Evan Solomon to see the depth of his discomfort...

For it couldn't be clearer. There is no way to defend that bill, it's simply INDEFENSIBLE.

And because it's indefensible it's bringing more and more ordinary Canadians into the streets all over the country to demand that it be killed.

For they understand what is at stake. And that if you don't fight for a democracy you lose it... 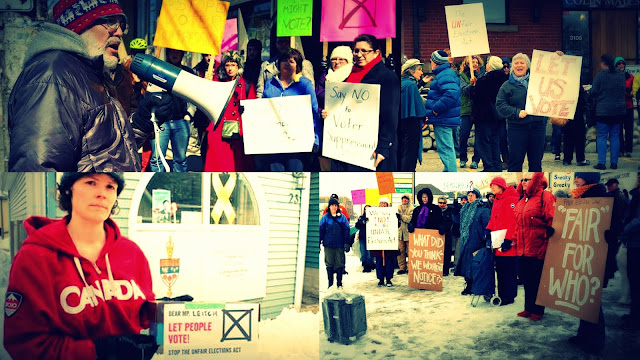 Which of course is bad news for the Cons and their depraved leader Stephen Harper. For it appears that their attempt to suppress the vote is backfiring and is actually going to BOOST IT.

By motivating Canadians more than any other issue has done in recent times, to defeat the ghastly Harper regime.

Poilievre set out to become a Con star by pounding the daylights out of our democracy.

Only to end up as a human punching bag.

Exactly where he belongs... 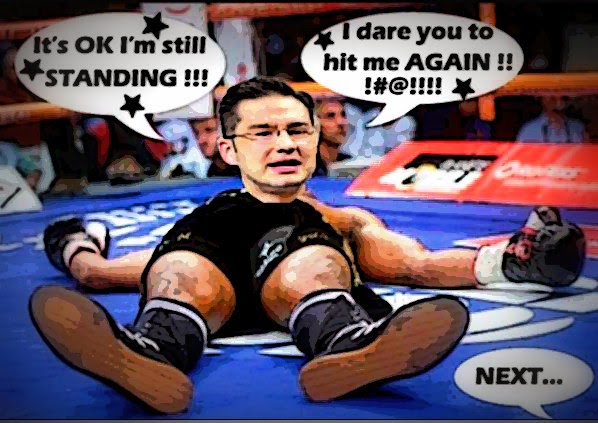 Poor Peeair. Really though, what does one expect from someone who said "the root cause of terrorism is...terrorists". Wow! What a thought provoking brain fart that was. It was his response to JT's quote that "we need to find the root causes of terrorism" which we do need to do. Of course, the 'Cons were tripping over each other and foaming at the mouth trying to get to a microphone to denounce JT.
The supposi-Tories are in perpetual election mode and I am sick of it. Their blatant use of taxpayers money for partisan gain has reached a level of sleaze this great country has never seen before.
2015, Heave Steve.

Some on CBC posted a comment that put a different spin on the Unfair Elections Act. We've been assuming that it is about the coming 2015 elections, but what if its not? What if its all about shutting down the ongoing investigations into election fraud for the past elections? By passing the investigative powers over to the director of prosecutions under El Mackay, it would give an opportunity for the Cons to get rid of any and all progress of current investigations on fraud in the 2006/11 elections. All they would need is for the bill to pass for a single day or two and a the poor overworked shredders at the CPC HQ would be working over time. Whether the bill gets shut down in courts later, even if before 2015 elections, it would be irrelevant as the goal would already be achieved.

As a parent, I never used physical violence as a disciplinary measure for my children. I thought it was physically cruel and, more importantly, damaging to the mind of the child.

However, when I see Conservatives such as Pierre lying to Canadians, I'm beginning to think that harsh discipline might be, in some cases, necessary. Did Pierre receive too much spanking or not enough? Should one simply outsource public spankings to Evan Solomon and/or the CBC? Your opinion would be appreciated.

Without prejudice, which is my way of saying that the comment may be seen as that, though I bear him no malice.......... does Pierre remind you of a certain Himmler historical character?

Into this mess wanders a mountain stranger from great metaphysical and geographical distance. They have had proportional representation since the Nazi were thrown out. I think Thomas Vanek will stay in montreal. We have a transcript.

A: do you have a life phrase.
V: eightpoint five million a years for seven years in Minnesota, or the after tax equivalent. I am Vanek, I come from Austria, just having to live in America instead of Austria is a huge tax on ones common sense. Montreal is as close to Vienna as your going to find in the Capitalist Running Dog Theme park you call life. Another plus you got French Strippers, in Austria we got nothing but Romanians. Although I got a text today a hot shipment from Ukraine is expected. We have the Beatles, all you need to know about Ukraine Girls. I know your beloved Dear Leader is a big Hockey Fan, he has contact me directly. He says if I play for the leafs next year he will once again allow VISA for the Canadian Ballet, and I can have Ukraine peelers in Canada. He really has strong feelings for the Ukraine. You may think the PM is caulous using the misfortune of others for his own pleasure. Perhaps that is just his character, we call it SchandenHarper. Not only enraptured but plotting the circumstances.

I have had that same thought for several weeks now Anon A.

Your point is well taken. Never actually thought of it. However given recent rulings by the Supreme Court of Canada, the Cons may not get away with it. Do hope that nice lawyer in Toronto will be willing to take this case on also, if that's what the Cons plan.

Loved the red skull. He really is cute.

Nothing would please oil can more than to be able to deny the vote to 400K or more Canadian citizens. He wants to remain in power forever. He doesn't realize how much he actually has in common with Mr. Putin. Both were democratically elected and then set out to dismantle the democracy. We saw it in Germany prior to WW II, we have seen it in other countries. Mr. Harper wants to be the first dictator in modern history in Canada. Well we all know what happens to dictators. For some, they are in jail. For others, unfortunately justice was a tad swift. No one deserves to die, but Canada doesn't deserve Harper either. He runs off to Ukraine and lectures Putin. Perhaps Harper ought to come home and try returning this country to the democracy it once was. Better yet, Harper ought to resign and leave this country alone.

With any luck we will have un elected Harper in 2015 never to be seen again.

hi anon...yes Pee Wee Poilievre really is something, and the fact that Harper would make him the Minister of Democratic Reform, tells you all you need to know about Pee Wee and Harper. And what those filthy Cons are doing to this country and its democracy is simply unforgivable. However, think of it this way. Won't it be a glorious day when they are defeated?

hi anon 8:59...yes I have mentioned this several times too. The Unfair Elections Act has several purposes. It seeks to suppress the vote and give the Cons a fundraising advantaged. But it's also intended to make it harder to prosecute the Cons who tried to steal the last election. Not just by making the election commissioner responsible to them , instead of responsible to Parliament. But also by denying Elections Canada the powers they requested to force witnesses to testify. However, like all criminals they think they can get away with it, until they're caught. And sooner or later they will be exposed, they will pay the price, and it will cost them everything...

hi e.a.f...you like old red? You know I don't really know why I started putting skulls in the margins of some of my pictures. I guess I must have decided that pigs were too good for them. ;) But yes, Harper is slowly going off the deep end, and I'm still hoping that he will save us the trouble of defatting him, and resign before the next election...

hi anon...well I don't believe in getting physical with those Cons, although I have to admit that I have given many a bully more than a good spanking. However, I am in favour of heavy prison sentences, and I will insist that Poilievre be sentenced to sit in a cage with a dunce cap on his head... ;)

hi anonymous A...although I don't like to call the Cons Nazis, because they're just shabby fascists, I have to admit that if I was working at Central Casting I would definitely choose Poilievre to play a Nazi in the movies. He does have that fanatic look and he does have the Himmler glasses... ;)

hi steve...I find it hard enough living in Harperland, so please don't bring up the Montreal Canadiens, I can't stand anymore humiliation. Although I must say the fact that they are actually going to make the playoffs is a pleasant surprise. And I would love to play Harper. I might not be the greatest player the game has ever known, but I'm dangerous in the corners... ;)