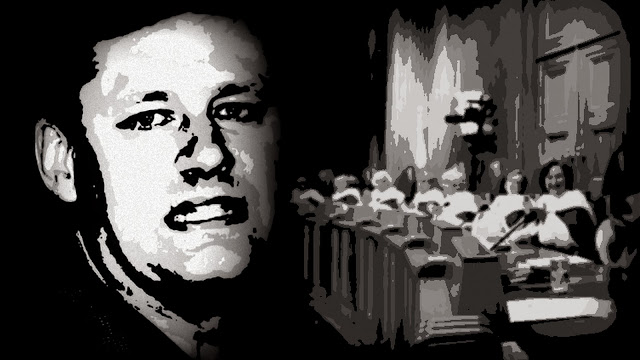 It has to be the most humiliating moment of Stephen Harper's political life.

He tried to appoint a judge to the Supreme Court who wasn't properly qualified, for crass political reasons.

He rushed the appointment through Parliament, and then tried to change the law retroactively to make it legal.

He tried to subvert the Constitution, outrageously. And got taught a lesson he'll never forget.

Among the lessons: Don’t play politics with the judiciary. Don’t play fast and loose with the law. Pick the best-qualified, not the average. Understand the Constitution.

And one he thoroughly deserves.

The Harper government thoroughly deserved the complete rebuke it received Friday from the Supreme Court of Canada. The Prime Minister and Justice Minister Peter MacKay mishandled everything in their attempt to place on the court someone whose conservative ideology rather than legal expertise commended him to the government.

Because no Prime Minister has made a mockery out of our democracy, or debased our country's values more than him and his foul Con regime.

No other government would have tried to appoint a semi-retired judge, with a record of overturned decisions, to the nation's highest court.

For the sole reason that he agreed with them in the shameful case of Omar Khadr. 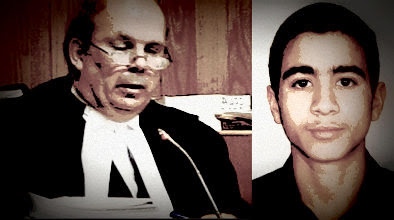 And only the Con regime would have tried to change the law retroactively, by rushing the changes through Parliament, in an omnibus budget bill, wrapped up in their Porky Action Plan.

As it is, at least this all results in the phrase “economic action plan”—as in, “Economic Action Plan 2013 Act No. 2,” the bill’s short title—making it into a decision of the Supreme Court of Canada, where it shall be preserved for eternity for future legal scholars. (Another victory for branding.)

For they are SHAMELESS.

And he would debase everything he touches... 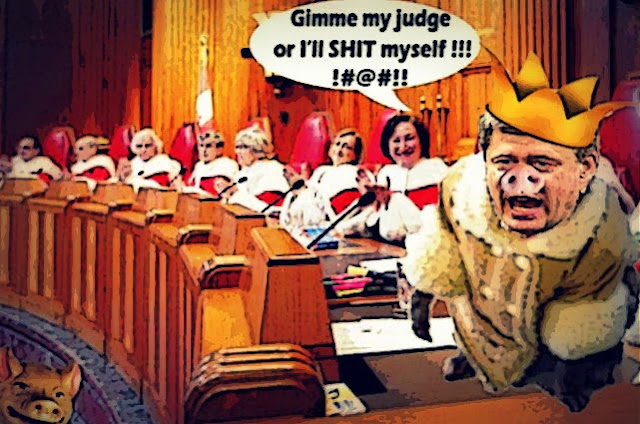 And the really scary part is that they almost got away it:

They almost succeeded, which ought to produce a lot of soul-searching among those who care about the integrity of the courts. The country’s legal profession remained abjectly silent in the face of a less-than-satisfactory process that produced an obviously ideological appointment.

The parliamentary committee barely studied the candidate, in fairness perhaps because MPs were given so little time to investigate a nominee about whom so little was known. Law professors, with a few exceptions, clammed up despite their beloved tenure. It took the Supreme Court, by a resounding 6-1 majority, to say “No.”

Until they were stopped in their tracks by an ordinary citizen who refused to stay silent... 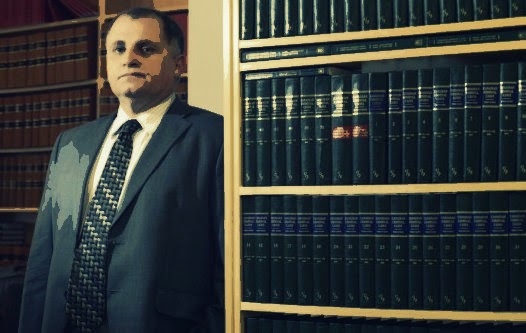 Who was wondering today, with good reason, why he had to pay to clean-up Harper's mess.

“It was like a university exam — I’m glad it’s behind me,” he said in a phone interview.

But he said he was still “disgusted” by two things: That no one “in the state apparatus” — which he said meant the PMO, the department of justice, even the chief justice’s office that swore in Nadon — objected to the appointment; and two, that it took a private citizen like him to challenge it.

But is of course an example to us all.

Just like the ordinary citizen who blew the whistle on Brad Butt's outrageous claims that he had personally witnessed voter fraud...

And left him looking as ridiculous as Stephen Harper must be feeling today.

On what was supposed to be his Big Day.

Posing as a champion of democracy in Ukraine... 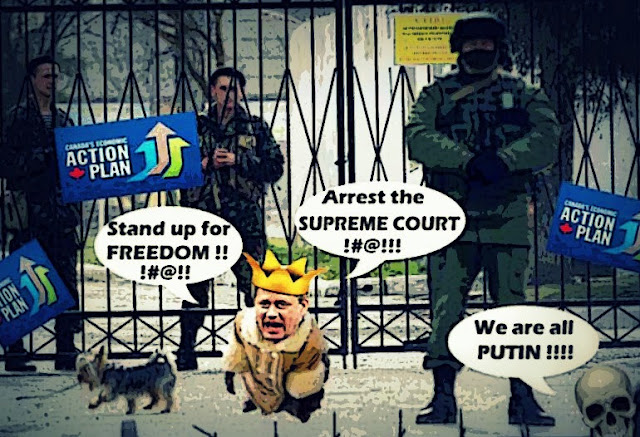 While having to dodge questions about his latest attempt to subvert democracy in Canada.

Or trying to explain why his own actions are leading his own citizens to revolt.

For that is what is happening.

Every day there are more of them saying enough is ENOUGH.

And it couldn't be more ironic eh?

He has always hated the Supreme Court, he treated it with contempt, he debased it, he wrapped up his filthy scheme to subvert the Constitution in the Porky Action Plan.

Only to end up debasing himself... 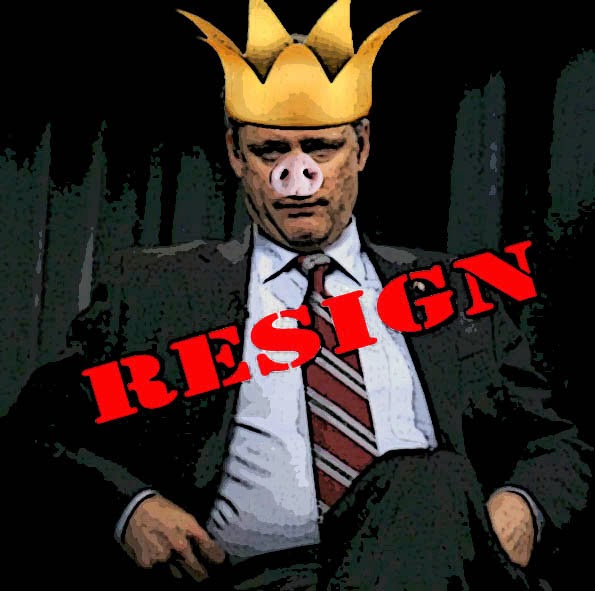 Did you notice the press releases don't shout "Harper Government" like the good old days?

Fat lady has not sung on this one yet. Harpo can still appoint Nadon to the Quebec bench for a week or so and then do a Supreme. Same think for the babysitters best friend Vic.

Thank you Mr. Galati and Mr. Slansky for protecting our constitutional rights and the integrity of our Supreme Court.

Wake up Canada. We have on our hands a prime minister who is willing to break and subvert the laws of Canada in order to implement his perverse ideological agenda.

Harper is no Conservative, he even lied about that. Who knows what the hell else, Harper has buried in his, Omni-Bull-S-Bill. Harper is so hated, his security bill has doubled.

Harper is so repulsive, I can't imagine how anyone can support that monster. Harper has not one saving grace...he has no honor, decency, ethics nor morals, what-so-ever.

Harper appointing Nadon, reminds me of the expense fiasco. He didn't know about that either, he raced to get out of the country with a very flimsy excuse. Harper has fled the country again, over his appointment of Nadon. Harper knew nothing of those Laws? The hell he didn't? Harper just used his dirty tactics, trying to sneak Nadon through.

If someone knows of a way to get rid of Harper, they had better start acting on it. We were warned if, Harper ever had a majority? We could kiss Canada good-bye.

I now hear Air McKay went to Ukraine with "The Scarf" and Dear Leader. Title: "The Three Stooges go to Ukraine". The utter hypocrisy of Harper trying to pass himself off as a champion of democracy is revolting. I hope the Ukrainian/Canadian population see him for the opportunistic POS that he is. The sweet irony of it though is the supreme court unanimously opposing him and that three of them were his appointees. Sweet. I can just imagine the hissy fit he's having over this:).

Would Nadon accept though? Would he have the gall to go where he's not wanted. Is Nadon ready to be reviled by the Canadian people?

hi peacekeeping veteran...good catch. And isn't that interesting? You don't think that maybe the Cons are finally realizing that calling their foul regime the "Harper Government" only makes it sound worse and even more unpopular. I'm hoping it's like the mob, one day you're the Boss of Bosses, and the next moment you're the Boss in a Barrel... ;)

hi Steve...It's true that the fat lady, or Jason Kenney, hasn't sung yet. And it is theoretically possible that Harper could could appoint Nadon after he joins the Quebec bar for a day. But that would so discredit him, the court, and Nadon himself, that I doubt it's a realistic option. And as for Vicky, appointing him to the Supreme Court would be the last thing Harper did. I just can't see it either...

hi anon...I agree with you completely. It's very encouraging to see how ordinary citizens can make a difference, and they are an example to all of us. For I always like to remind people that we are not just better than them, we are more than them. And if we work together, we will drive the Cons from power and start rebuilding our Canada...

hi liberalandlovingit....Too many in this country have been silent for too long. But as I said in my post I think that is changing. More people are looking to express their opposition to the Con regime, and it's important that the parties and grassroots organizations find creative ways for them to get engaged. There are many ways to do that, and it can be a large commitment or a small one, but like raindrops that wear down mountains everyone counts...

hi Earnest...thank you, I appreciate it. And I needed it. One of my few serious friends, whose advice I cherish, took one look at my Monkey Harper in the Senate illustration, turned pale, shook his head, and said "Simon when are you going to grow up?" And I was devastated for at least five minutes...;)

hi anon....there is a way to get rid of Harper. We organize, we unite, we rally our friends and neighbours, we spread the word, and above all we work harder than we ever have to get out the vote. Because it's really as simple as this: if we get out the vote the Cons WILL be defeated...

hi anon...Dumbo MacKay is also on this junket? Golly, I'm starting to think that since they knew when the Supreme Court ruling was coming down, they planned their getaway accordingly. The whole trip reeks of cheap jingoism and cheap politics. But I think most Canadians, including most of those of Ukrainian descent, can recognize opportunism when they see it. As for the fact that three of Harper's appointees ruled against him, I find that very encouraging. You can take the Cons out of The Great White North, but you can't take Canada out of it....

I was hoping the Cons would switch to calling themselves the Harper regime, which is more accurate anyway.

One way is to start LeadNow groups/chapters in every town and city in Canada, and have monthly meetings. If you live in a city with over 100,000 people, then have more than one group. eg. 300,000 people = 3 chapters.

oh ya, you bet, he doesn't care if Canadians and the other judges don't want him. He wants the money. he wants what he is entitled to. He did his best to give oil can what he wanted and now he wants his reward. People like Nadon have no shame. They think they are above it all. Just think of this as the start of the next scandal. We saw how well oil can did with his appointments to the Senate, now watch his appointments to the Supreme Court of Canada. Once he has his Supreme court boys, he'll get the decision he wants. oil can is no better than putin and other dictators. They get elected and then start to dismantle the democracy so they can stay there for ever.