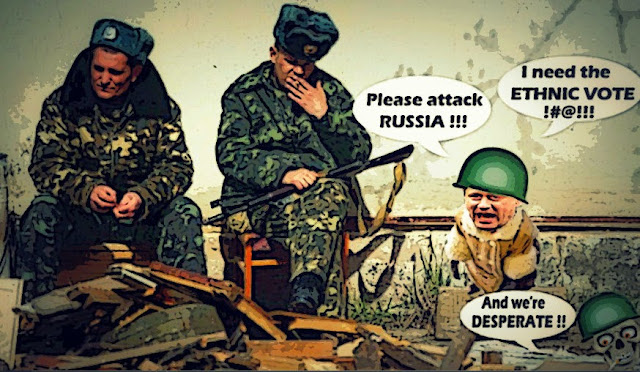 Well there he was in Ukraine, posing as a champion of democracy, in relentless pursuit of the ethnic vote.

Or a Great Warrior Leader.

Blasting Con propaganda out of every orifice.

Or a dangerous chicken hawk.

Stephen Harper’s visit here Saturday was short, symbolic and sombre, a moment of historic significance when once again Canada took a first step with Ukraine at a crucial moment in its history.

But the most significant facet of a six-hour show of solidarity was the Canadian prime minister’s final transformation into the Hawk of Sussex Dr. on the question of Russian President Vladimir Putin’s seizing of the Crimea.

Suggesting that other nations might have to arm themselves.

The prime minister, who flew in from The Hague Saturday morning and returned there in the evening, said in his meeting with Yatsenyuk that Putin, by repudiating the Budapest Memorandum, “has provided a rationale for those elsewhere who needed little more encouragement than that already furnished by pride or grievance to arm themselves to the teeth.’’

No doubt with the help of the Canadian military industrial complex eh?

Because as you know, with the Cons in power, they'll sell weapons to ANYONE.

Even though the situation is tense enough.

War is definitely not the answer.

Like they need a hole in the head, or a superpower confrontation.

Or a mad monkey in their midst... 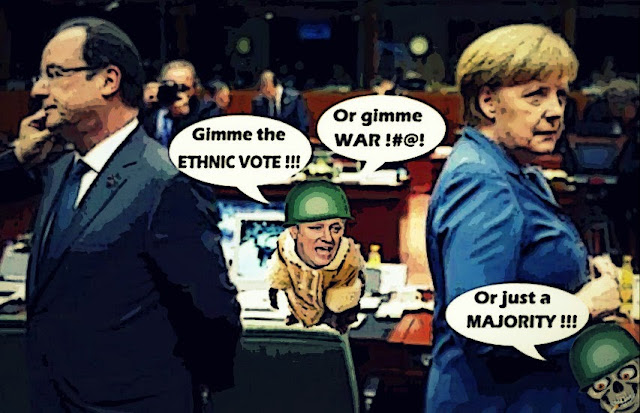 And this statement from Great Freedom Leader takes hypocrisy to its absolute limit.

“The government of Canada has always stood with those who defend freedom, democracy, human rights, and the rule of law,” Harper said at a joint news conference with Yatsenyuk following their meeting.

Coming as it does from the sinister totalitarian who is doing everything he can to destroy our freedoms, cripple our democracy, muzzle his opponents, and suppress the vote.

The tin pot tyrant whose foul election bill is sending the wrong message to democracies all over the world.

The Conservative government is trying to change Canadian election law in a way that is "deeply disturbing" and "sends a very poor message" to countries trying to become democracies, an international democracy expert says.

"When a democratic, established democracy in the west like Canada seems to be curtailing its own ability to do that, it sends a very poor message to new countries in the Arab world, in Africa, in Asia, who are attempting to move from authoritarianism to democracy," he said.

And who wouldn't know the rule of law if it hit him in the face.

But then those are our shabby Cons, and the whole world knows exactly who they are.

The greatest bunch of phonies and fraudsters Canada has ever produced, who will do ANYTHING to win an election.

They know that Stephen Harper is no champion of democracy.

And that despite his big words, and his absurd and dangerous posturing.

He won't be Prime Minister of Canada for much longer.

And even with his spiffy paper hat.

He is definitely no great Great Leader...

Now we know the present 'government' in Ukraine is made up of a coalition which includes ultra right nationalists like the Right Sector which glorifies the Third Reich and Svoboda which now heads up major ministries. A Ukranian rabbi has asked Kyev Jews to leave the city and maybe the country for their own safety and has closed Jewish schools. Copies of Mein Kampf are being distributed in the square.

I hope someone at The Hague tells him "ok Steve, we heard you, now shut the f*ck up"! It's reminiscent of the school bully mouthing off over and over until someone finally punches him in the nose and the true coward is exposed. The bully cries, shits his pants and runs home to mommy blaming everyone but himself.
It's too bad Putin didn't have a couple of Migs escort Harper back to The Hague. Now that would have caused a few unwanted bowel movements.
But seriously, Earth to Harper: leave the harsh words for the Euros who border Russia. They don't have the luxury of living as far away as Canada but they would be the first to have to deal with the angry bear you keep poking with a stick.

The investigation into electoral fraud (robocalls), is that still ongoing?

Harper knows he is so despised, his security bill has doubled. We also know? Harper is using every dirty tactic to stay in power. Harper has all of his ducks in a row, to cheat the next election too.

Harper never does anything, out of the goodness of his heart. Harper only cares about Harper. He is using the Ukraine to gain votes from the Ukrainian citizens in Canada. He also sucked up to Israel to gain, Jewish people's votes and donations in Canada. Harper and the BC Liberals, are using the thousands of Chinese brought into BC, for their votes and donations as well.

Harper is no Conservative, what-so-ever. Harper was Policy Chief for his, Northern Foundation of 1989. Harper is the one and only Canadian PM ever, to be held in contempt of Parliament. When even someone such as Putin, called Harper and the west fascists? How bad is that? How many more countries know, Harper is a fascist. dictator? Will we have to appeal to other countries, to rid Canada of Harper?

Harper is so low of character? He could walk under the belly of a snake, wearing a top hat.

Steve Harper & The DIL-BIT Cowboys. Yee haw. The Rootin Tootin idiot brigade - on the scene like a blight.

Most likely Ms. Merkle will tell oil can how things are going to work. Her country has much more to loose than Canada. As I understand it Ms. Merkle will also be able to tell Harper in 5 languages where to go and how to get there.

hi anon...yes I've seen some good articles and posts about that recently. And of course the Cons don't mention that at all. Their black and white view of the world is appalling, and by talking up a storm for the sole purpose of winning votes back home they are doing nobody any favours...

hi anon...well that sums it up, and I would only add "and the worst Prime Minister this country has ever seen." I think that after eight years in power he is slowly losing his grip on reality, and I fear where his madness might take us...

hi anon...I'm pretty sure the Europeans wish he would just stay on this side of the Atlantic. The situation in Ukraine is both delicate and complex, the people of that country are going to have to work it out themselves, and we need to try to calm the situation right now, not inflame it. The sad thing is once we were really good at that, and now we're just a nuisance...

hi Hugh...yes it is continuing and the trial of Michael Sona is due to begin in the fall I believe. There is also a report on the overall scandal due soon, so I'm still confident that something will come out of it, and that one way or the other the Cons will pay a political price...

hin anon...I like that..."He could walk under the belly of a snake wearing a top hat." I'm going to have to go shopping for a top hat to put on my monkey man...;)

hi liberalandlovingit...The Rootin Tooting Idiot Brigade ? I love that too. You guys are really good today. I do have a cowboy monkey in my files, and I think it may be time to put him on parade... ;)

Harper is a hipocrate. He had no problem following the USA into Iraq. What they did in Iraq is much worse than what Putin is doing in the Crimea. Look what is left of Iraq and how many people were killed. The Crimea, well two dead, in the take over. its not right and any loss of life is unacceptable, but if Harper wants to throw sticks around, he ought to be careful. If oil can is so concerned about Russia going into the Crimea, why hasn't he been just as concerned about China sitting in Tibet. He wants a free trade agreement with China, but Putin he wants sanctions against. Get real Harper.

Nothing Harper says is going to be paid attention to. He doesn't live in Europe. He doesn't suffer the consequences if there is a war in Europe. If Harper really wants to be helpful, he can welcome all the Tarters and Ukrainians who want to leave the Crimea to Canada. Ya, we all know that isn't going to happen. We have enough war and misery and dead children in Syria. Lets not start in another region. It maybe that we will wind up in a war with Russia, but at this point, lets be calm and not pay too much attention to Putin. He isn't paying any attention to the rest of the world.

If Harper things he can "win" the vote of those with ties to the Ukraine, he is sadly mistaken. He doesn't understand that many of those Veterans he has been ignoring and "dissing" are of Ukrainian descent. People of Ukrainian descent in Canada are at least a generation removed. Their interests lie in Canada. In Canada we have a slowing of the economy, students with large student loan debts and no decent jobs, importing labour for which Canadians could be trained. The list goes on.

Now before Harper starts sending hundreds of millions of $s to Ukraine he might want to check and see who gets the money. Not all of those who have influence or who may come to power are going to have values consistent with democracy. We have already seen the "invasion" of a journalist's office, was beaten and forced to resign because the fascist didn't think the journalist was "Ukrainian" enough. Given Harper's love of the Jewish vote, he ought to be very careful. He might undo any votes he might have acquired by going to Israeli. Many of those in the Ukraine are anti Jewish. Harper is going to look very stupid if he gives Ukraine a couple hundred million $s only to see attacks on Jews in the Ukraine. Better to send the money to Jordon which is a small country trying to deal with hundred of thousands of Syrian refugees.

If things go sideways for Jews in Ukraine or Crimea, is Harper going to welcome them to Canada as refugees? Most likely not. He just never puts his actions where his mouth is.

loved the little skull. he has such good lines!

Harper Canada....withdrawal of democracy 101. He is Captain Oligarth in drag!