Pierre Poilievre and the Bill That Must Be Killed 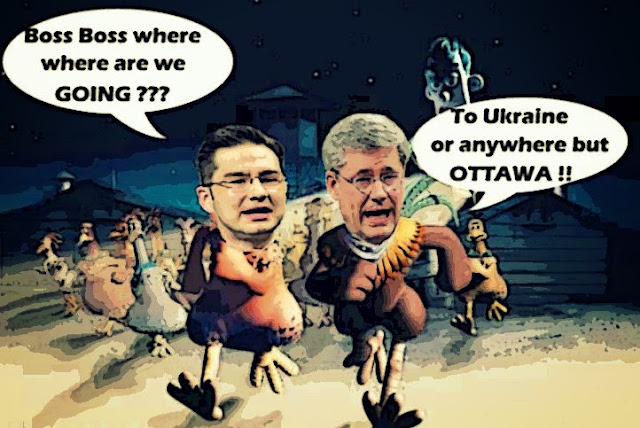 Golly. When Parliament returns today I bet Pierre Poilievre is going to wish he was on the run somewhere in Europe like his ghastly leader, the feathered warrior Chicken Harper.

For it must be said that if his so-called Fair Elections Act was a chicken, they'd be getting ready to serve it, on a plate, with mashed potatoes and gravy.

Because it's so bad, and Poilievre's attempts to defend it have been so pathetic, that now even the Globe and Mail is calling for it to be KILLED.

How bad is the legislation? As a group of academics put it in an open letter released last week, if this bill becomes law it will, “undermine the integrity of the Canadian electoral process, diminish the effectiveness of Elections Canada, reduce voting rights, expand the role of money in politics and foster partisan bias in election administration.” Unfortunately, that’s an accurate summary.

For so many good reasons.

There was no massive voter fraud.

The government has touted the bill’s changes to voting rules as needed to prevent voter fraud. That’s a red herring. There is no evidence that vouching, a process the bill eliminates, led to widespread fraud.

Except for the Con conspiracy to try to steal the last election.

No matter what the Con clown Brad Butt said he personally witnessed, until he admitted he was LYING.

And no matter what Poilievre said, until he was caught in the act trying to twist the truth.

The government has resorted to defending itself with out of context citations from experts, whose conclusions are the opposite of what the government pretends. Tightening the rules will prevent many eligible Canadians from voting; those affected are mostly not Conservative voters.

And despite losing half his feathers in his desperate attempt to defend the indefensible, Polly could STILL not answer any of these burning questions:

Other changes create a giant, partisan loophole in campaign spending laws, to the advantage of the Conservatives. Why? The bill gives incumbent parties in each riding the power to name key election officials, instead of leaving the job to an impartial Elections Canada. Why? Bill C-23 also takes direct aim at Elections Canada in other ways – neutering its ability to conduct public outreach campaigns and encourage voting. Why? It also meddles with Elections Canada’s ability to investigate wrongdoing or communicate the results of investigations. Why?

Which no doubt the opposition will be grilling him with in Question Period today.

When they're not asking him what he's trying to HIDE. 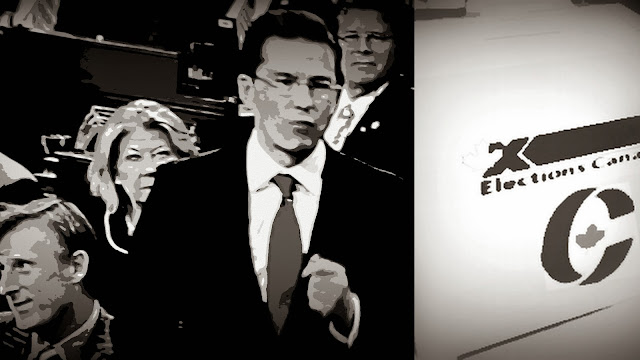 What is in the transition document Pierre Poilievre was given upon taking over the federal government’s Democratic Reform portfolio – and why is the government dead set on keeping it secret? After nearly six months of evasions, and under threat of a reprimand from the information commissioner, the feds have finally agreed to share the binder’s contents – in 2033. It’s enough to make one very curious.

Or why as the Minister for Democratic Reform he would act in such an undemocratic manner.

Two decades from now, if not before, Poilievre’s transition document will be revealed and a little more light will be shed on the Harper government’s brazenly undemocratic approach to democratic reform. Let’s hope, looking back from there, the glaring irony of that approach will strike us as more darkly comic than tragic.

Leaving us to wonder what the verdict of history, or the courts will be, after him and the whole Con mob are driven from office in disgrace and/or handcuffs.

Because when you try to steal an election or corrupt a democracy there can be no penalty great enough.

Golly, can you imagine how the Cons must be feeling, with the heat of yet another sordid scandal to roast them in the glare of even MORE bad publicity?

Are they running around like chickens with their heads cut off, like their Great Leader is in Europe?

Or are they just simmering in their juices?

It won't be long before we'll be able to serve them on a plate. Or with a warrant and  an eviction notice.

If you'd like to help roast them please place your order here.

And how is Pierre Poilievre doing?

Oh not so good eh?

He set out to screw our democracy.

And ended up impaled on his own petard... 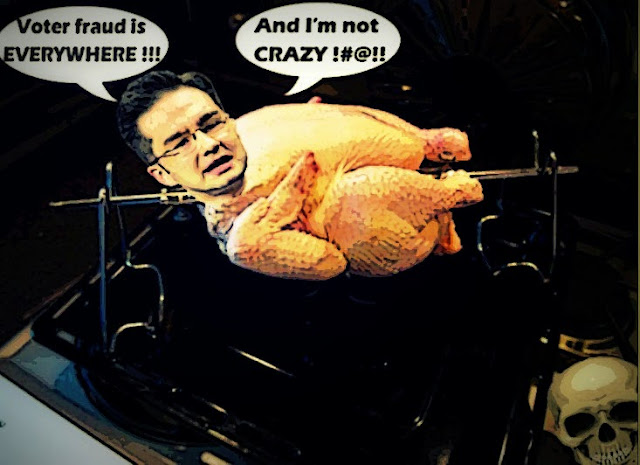 Couldn't happen to a worse government.

Couldn't happen to a nastier Con...

Lets see. if this elections act is passed we can be sure some one is going to take it to court. Perhaps Mr. Rocco Gilati will find time. He has a good track record. Perhaps that is why Harper wants Mr. N. on the Supreme Court of Canada. He will rule the way Harper wants him to. We will have little to no democracy left in this country. Perhaps Harper is doing this so people will become politically active, you know, to get rid of him. You can only fuck with a democracy for so long before you have a revolt.

http://www.youtube.com/watch?v=VIMnIh10po0&feature=share Simon, this is not really the right place to post this but I wanted to put it in one of your latest posts so that everybody could see it. Perhaps this could be emulated by a young Canadian using it against the Harper regime! Hope the link works. I'm not very good with computers.

I think it important that your readers
and those who follow other Indy bloggers & journos
plus those reading or hearing mainstream news
catch the different fraud definitions.. re our elections

The two types of fraud.. are getting blurred together.. and it becomes confusing
just as its all about RoboCalls.. when LiveCalls are also a key suppressing tactic
not to mention Vote Moving, people voting twice, unregistered voters,
mysterious scrutineers & interpreters at polling stations that nobody can now identify..
endless projections & partisan polls.. based on nonsensical polling questions..
and the questionable exit polls as well as interference at polling stations.. and so on..

I believe Stephen Harper, his War Room, the PMO and P Poilievre and sundry enablers
positively chortle smugly, every time someone says - re The Fair Elections Act
that there was no major or massive or consequential 'Voter Fraud'
because they know that uninformed voters or citizens will likely misunderstand the term
and interpret it that now the Harper opposition says there was no Election Fraud ..

Keep up the wonderful work .. !!!
And .. is that a small terrier appearing in some of your artwork ?

hi e.a.f...yes let's hope that this bill is challenged in the courts, but in the meantime were can use it to encourage Canadians to unite against the Cons. Because defeating them has never been more important. If a Harper gets another term there is no telling what Con stooges he might appoint to the court. And yes if there was ever a time for decent Canadians to revolt now is the time...

hi anon...Like many others I too have been disappointed by some of the things Obama has done, but I'm waiting to see what he does on Keystone before I completely give up on him. But why we do need is more videos by young Canadians appealing to their peers to join the fight against Harper...

hi salamander...all suggestions by you are most welcome. And you're right we do need to look at all the ways our democracy is being corrupted. The way Poilievre cherry picks the reports of others to misrepresent their views is absolutely disgusting. And when the Cons lie so blatantly it's no wonder that many Canadians are confused. What Poilievre is doing is taking what Neufeld said about administrative problems and equating them to acts of fraud. And it is difficult to explain to explain the difference, and that it's better to allow for some fraud, than disenfranchise thousands and thousands of legitimate voters. But we must try and the robocall report and the Sona trial should focus attention on the Con attempt to steal an election which is something most Canadians can easily understand. As for the small terrier...one did fortuitously appear in a graphic about the Ukraine trotting happily a head of our monkey leader. But apart from a stuffed dog that I occasionally use, canines are too nice to use all the time. And as you may have noticed I've evolved from using Mr Piggy to using Mr Skull. I guess I'm going to have to call that a sign of the times... ;)