The Sad and Dismal Legacy of Little Jimbo Flaherty 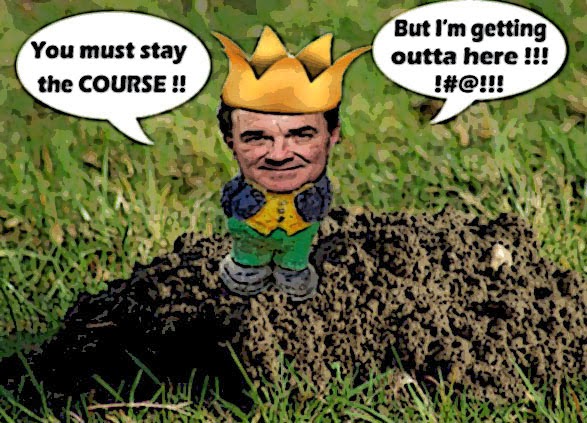 Well I see that little Jimbo Flaherty has fallen off his mole hill for the very last time.

Finance Minister Jim Flaherty has resigned. He is the biggest fish to swim out of Prime Minister Harper's pond since then-Environment Minister, and de facto second in command in the Cabinet, Jim Prentice, left to make oodles of money in the banking business.

But not before rhyming off a short list of his accomplishments, and ignoring all his failures.

He does not mention that the corporate thank you for that generous give-away via the tax system has not been to go on a hiring spree. To the contrary, most corporations are sitting on mountains of cash, and investing not at all.

Or his policies that created thousands of jobs in Alberta, while killing thousands of others in the rest of Canada.

Nor does he mention his shameful Trojan horse omnibus bills... 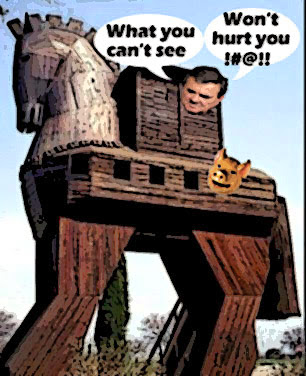 Those bills were the sneaky legislative devices through which the Harper government radically changed the federal environmental regulatory regime, and abolished or radically altered some of the most important environmental laws Canada has ever had. Those laws include the Fisheries and Navigable Waters Acts.

Nor does Flaherty mention the unconscionable witch hunts, via tax audits, his omnibus bills unleashed on a number of environmental non-profit organizations.

Or the way he killed jobs and slashed services, while spending money like water, leaving Canadians drowning in debt, and his successor in the lurch.

Program expenses are now equivalent to 13.5 per cent of gross domestic product, up from 12.5 per cent when he took the job. The gap between the rich and the poor has widened. Canadians are carrying record debt levels.

Most importantly, Canada’s economy has stalled as the recovery of the rest of the world has accelerated, leaving Mr. Flaherty’s successor to manage an economic underperformer. And Mr. Flaherty’s zeal for rapidly bringing the budget back into balance, even as a sputtering economy made a good case for continued government investment as a stimulus, may well have contributed to the loss of economic momentum.

You know, his successor Joe Oliver.

The hapless tool of Big Oil, who called environmental groups terrorists, and once challenged us all to drink the water from the tar ponds... 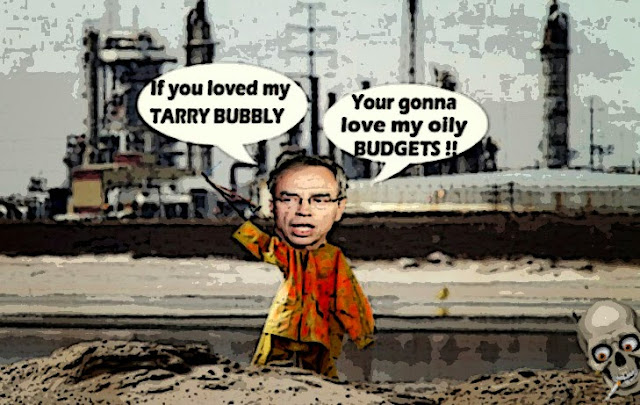 Which only shows us how shallow the Con talent pool is, and that we better start stashing our money in our mattresses before it's too late.

Because remember how the Cons spent millions of our tax dollars telling us Canada was suffering from a shortage of skilled labour?

Well it turns out that was just another Big Lie.

A new report from Statistics Canada is raising questions about the seriousness of what the Conservative government says is a major national problem: jobs going wanting due to a lack of skilled labour.

Jim Flaherty didn't know what he was talking about. There are no jobs.

And of course Stephen Harper is not a real economist either... 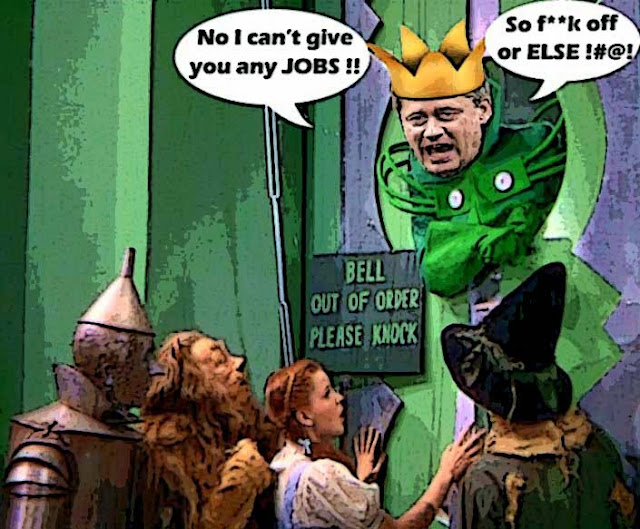 Oh well. I'm going to miss little Jimbo and his molehill. And I'm sorry I made only one video about him years ago.

And it's REALLY bad eh?

But it will have to serve as his requiem...

Along with this one:

And thank goodness they're almost over...

Interesting that he's returning to the private sector, I'm sure he had no trouble finding a job, unlike the many hundreds of thousands he's hung out to dry with his grossly outdated policies and hideous ideology. We're in for a few rough months with Oliver at the helm, the good news being an election is right around the corner and this cabal may finally get what's coming to them. The only downside is when they finally get booted, there will be a few hundred precious jobs gobbled up as they get "hired" in the private sector.

History will not be kind to him..
as the weak, complicit hired architect.. or publisher of
The Dirty Harper Omnibus 'Budget' Bomblets
attacking seniors, vets, pensioners, environment, The Charter, First Nations
while allocating unlimited funds to spy on ordinary Canadians
spewing millions at imaginary Ekonomic Aktion Plans
and billions on 'consulting contracts' to unidentified corporations

Some day soon.. Canada and Canadians will recognize Stephen Harper
and all the weak complicits sucking his pathetically thin & shrill ideological minestrone

Time to come clean Jimbo.. if not you.. somebody else..

Its never been about you or Harper being able to recognize Canada ..
that's pathetic narcism .. and Harper hyperbole ..
What's real is whether Canada cares to recognize you as Canadian ..
or designate.. you .. as a complete loser..

No hurry .. no worry ...
This land called Canada eats small fry like you..
without even burping ..

So our little Jimmy the Leprechaun and his pot of gold have left for $greener$ pastures. Was that a tear I saw in Harper's eye or did he miss with the hair spray again?
So long little Jimmy. I know you danced to the tune of your Dear Leader and by doing so, you've earned a legacy of deceit and omnibus budgets which will forever precede you.

Those Con platitudes about jobs going unfilled due to a lack of skilled labour are actually correct. The problem is the skill that the employers are complaining about is the skill to work for a fraction of your actual worth, preferably below minimum wage, and to take abuse like unpaid overtime in stride. Canada has far too many people actually wanting what they are worth.

He left a long time ago. Its just now that the body is leaving. For more than a year, he sat in Parliament and didn't move. Oil can would be up on his feet, along with the others cheering or whatever, but Jim just sat their eyes straight ahead.

Returning to the "private sector" to make a lot of money, is probably a smart idea, before the entire Canadian economy tanks. He saw the end coming, he saw he wasn't getting what he wanted and decided to "leave". Expect others to follow.

There is no shortage of labor in Canada, what-so-ever. Harper works for the corporations, it is they who are demanding cheap foreign labor to exploit. Harper is also working on the TPP, which is another corporate give-a-way. This gives corporations even more power, to thieve from our citizens. Every time the corporations line up at the trough and squeal for more money? Harper gives them another $60 billion in tax reductions. Harper takes from us, to give to the wealthiest outfits in the world.

As to Harper and Flaherty's evil Omnibus Bill, the both of them should have been kicked right off the planet.

Foreigners have free transportation, are housed and fed. Their countries cost of living is a fraction of Canada's cost. Canada has the highest cost of living, in all of the Americas. In one Province of China? Their minimum wage is $236 per month. So half pay for the Chinese is a very good living in China.

Canadians are who built, schools, Hospitals, roads, power dams and such. Foreigners don't, they send their money back home. Their wages don't even get spent in Canada.

We are far used to the good and decent democratic Canada which, Canada is no longer a decent nor a democratic country. To get rid of Harper, we would have to march on Parliament and bodily throw him out.

it is now a big issue. We all should think seriously about this. I want to know more about them.
win a harley davidson