The Dead Swan and the Maple Tree That Lived Forever 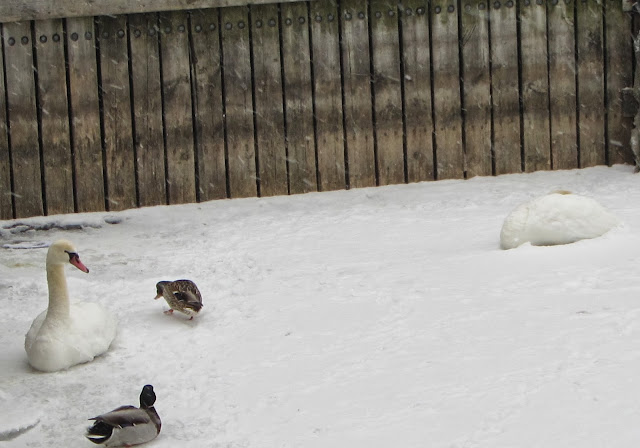 Two days ago in the freezing cold of this never-ending winter, I noticed a swan lying weak from hunger on the frozen lake, while its partner looked anxiously on.

Unable to understand what was happening, why there is almost no open water this year. No place to draw the food from it needs to survive.

I did my best to revive it by hand feeding it baby spinach leaves, but it was only strong enough to eat a couple, before it tucked its head into its feathers and went back to sleep again.

And when I went back to feed it today I found it had died. 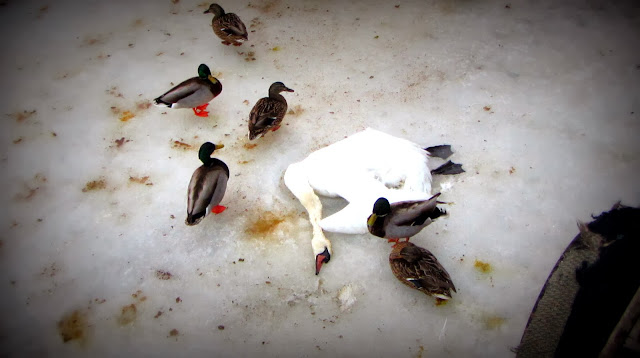 As have so many others.

And for a moment I was so sad, and so tired of this merciless winter, and so sick of living in this ghastly Harperland, that poor dead bird seemed to symbolize the state of the country itself.

Frozen, paralyzed, unable to understand what had happened to it, while Canadians look on helplessly seemingly unable to stop Stephen Harper and his Cons from finishing it off.

Because he has done horrible things to our beautiful Canada, it is almost dead, and we have never seemed so tired or so broken, and impotent to save it.

But since I can't let sorrow or exhaustion weaken my determination to defeat crush that foul bully regime, I went looking for a symbol of hope, and I found it in the story of this legendary silver maple. 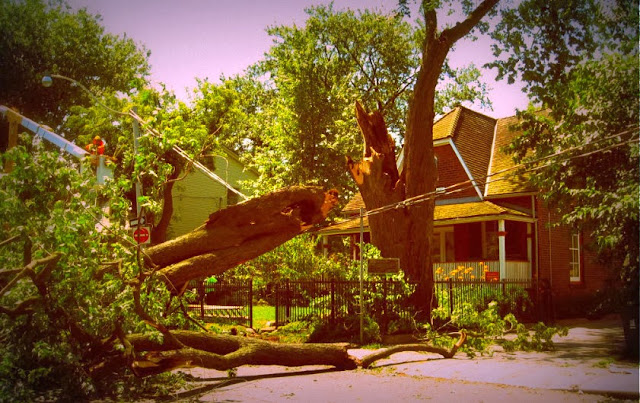 Because back in July when it came crashing down not too far from where I live, I thought that fallen tree also symbolized what the Cons were doing to Canada.

Especially since it happened just a few days after that foul un-Canadian regime ordered that the maple leaf insignia be removed from the shoulders of our soldiers.

And Stephen Harper has been trying to kill this country, the one he once called a second-rate welfare state, from the moment he came to power.

But guess what? It turns out the old tree didn't die, the legend lives on, and a host of Canadian artists will give it new life.

They’ll transform the tree into some 150 projects for public display (and personal use) in museums, historical societies and public buildings across Canada, from wig stands for cancer patients to a lap desk for the Speaker of the House of Commons.

Because some things like the idea of a country you just can't kill. Not when Canadians join forces to save it.

And as I told you back then, the legend of the tree will live on in my life, in the shape of a few leaves I took from one of its broken branches.

And pressed between the pages of one of my most precious heirlooms... 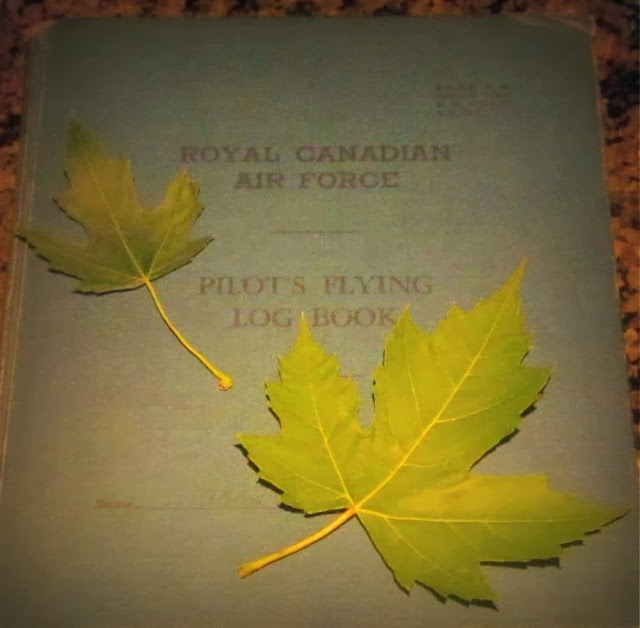 For he hated tyrants and bullies too, and he wasn't about to let them win.

And if all that wasn't enough to lift my spirits, as I walked home after feeding the swans and all kinds of ducks still trapped in this little hole... 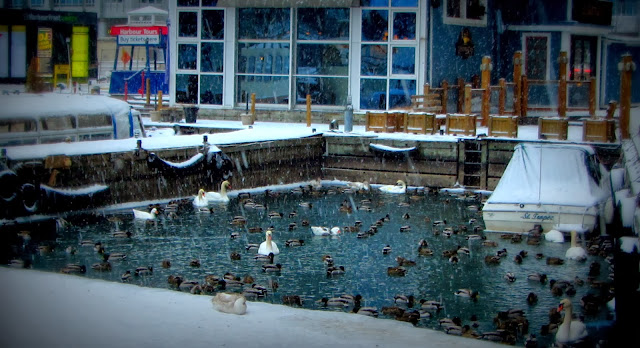 Who thanks to the efforts of others who are also feeding them, will most likely survive this winter.

I came across this other symbol of hope.

The strange sight of a bunch of roses wedged upright in the frozen lake. 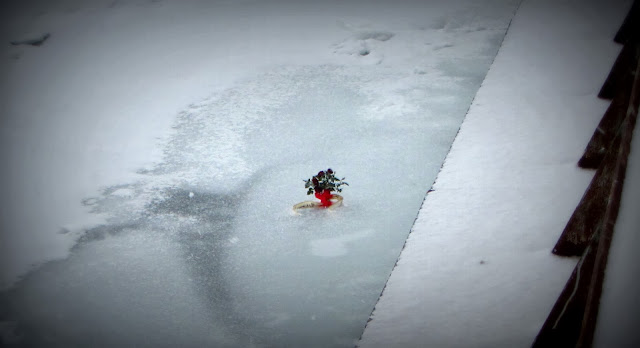 Which seemed to be telling me that better, and hopefully warmer times, are coming. That Spring is on its way and that this Winter from Hell will soon be over.

And when I got home I played this humble little video again. The one I made the day after the old tree came crashing down.

And its message only reminded me that no matter how I feel, or how sad or tired I am, I feel the same way today as I felt back then....

The Cons will be crushed.

The maple leaf is forever.

Labels: Harperland, the animal world, The Maple Leaf Forever, The Winter from Hell

I have a similar log book, mission maps neatly folded inside. My kids think it is an historical document I always just thought of it as my Dad's log book. There must be thousands of these on bookshelves across this country.

After we moved to our box in the burbs, my father showed up one day with a maple tree and asked if he could plant it in our backyard. I said 'Sure' and asked him why. He said 'Because it's a symbol of our country'.

When I despair of the deceitful bullies, I take a look at that tree.

That's a nice story. I feel so sad about the swan; the winter just doesn't end. Respite today, but it will hit us again tomorrow. I was out on my bicycle today.

The late dad of a friend was also a Second World War pilot. He was also Jewish, and had been an excellent student in a central Montreal high school before enlisting in the RCAF. After he returned, he applied to the McGill University medical school, but was refused, despite his high marks, because they had a "quota" on Jews. He returned there with his war medals and was not about to leave, saying he'd crossed the ocean and risked his life to fight that sort of crap (though this being just past the war, and he being a perfect gentleman, he may not have said "crap").

He got in, graduated with honours and worked all his life in a clinic in Côte-des-Neiges, in a neighbourhood where there were newcomers from the world over.

hi anon...Thanks to the Commonwealth training program there must be thousands all over the world. Mine didn't have any maps, but it did come with little notes from my grandfather neatly folded inside elaborating on certain entries. Like the day he overshot a runway and mowed a very unhappy farmer's wheat field. Or the day him and his best friend decided to buzz a luxury yacht in a bay, only to reported by the ADMIRAL inboard, and almost be thrown out of the service.
And what a nice story about your father's maple tree. I can't think of a better tribute to him and our country...

hi lagatta...I'm glad you finally liked line of my posts. ;) With the state this winter has left me in, it's a miracle I can write anything. And thanks for that story about that Second World War pilot. I'm familiar with the "quota" my old school used to impose on Jews. I'm sure that somewhere in the files of the McGill Daily you'll find more than one diatribe of mine on that subject. People like to portray French Quebecers as screaming anti-semites, but the English in Montreal and Toronto were equally guilty. He reminds me of the story of another distinguished Montrealer Dr. Victor Goldbloom, who helped break down the barriers between French and English. I met him several times and he impressed me with his human qualities...