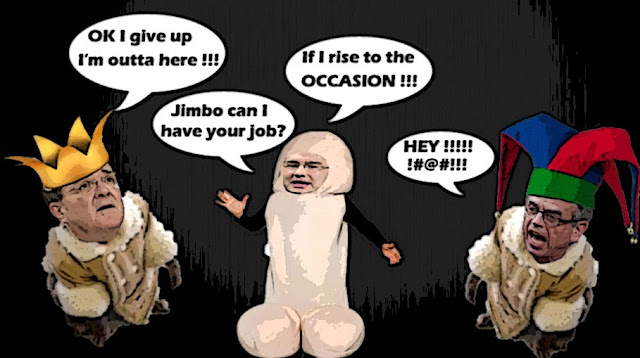 Oh dear. I can't help feeling that Pierre Poilievre is starting to regret that Big Daddy made him the Minister of Democratic Reform.

And is probably wishing he could have another job PLEASE PRETTY PLEASE !!!!!!

Because first the Chief Electoral Officer shredded his arguments in an appearance before a House committee.

Then the author of a report on the last election made a complete fool out of him for misrepresenting his report.

Pierre Poilievre isn't being fair in his reading of a report into problems stemming from the 2011 federal election, says Harry Neufeld, the report's author.

In an interview with Evan Solomon, host of CBC Radio's The House, Neufeld said Poilievre makes a "leap of logic" to say things that aren't in Neufeld's report. "But it's very much his conclusion from reading — I think quite selectively — parts of my report," Neufeld said. "I think any fair-minded person who reads that report would come to the conclusion that he has not been fair in his assessment of my findings."

Which clearly unhinged Polly so much he was reduced to stripping King John of HIS democratic credentials. 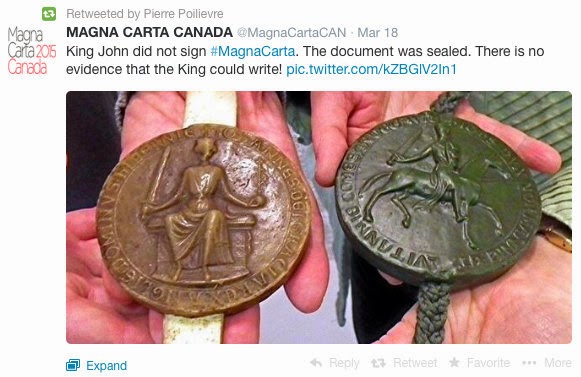 As part of his campaign to bring the Magna Carta to Canada, while destroying the Charter of Rights.

Which until the matter was cleared up, had the King of Canada squirming uncomfortably... 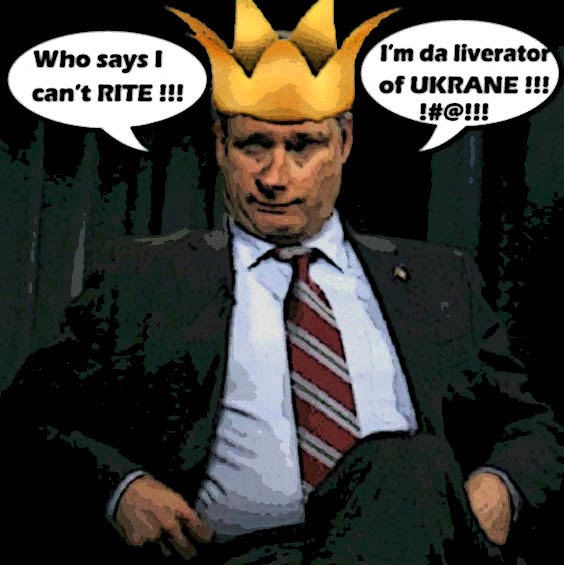 Because it can't be easy standing up for democracy in Ukraine

Stephen Harper is expected to tour Kiev’s Independence Square – the heart of the uprising that overthrew Ukraine’s pro-Russia government – on Saturday in a trip that takes him to the centre of Europe’s biggest crisis in decades.

In his visit to Russia’s doorstep, Mr. Harper will embrace the new government, which Moscow dismisses as illegitimate, and will stand with Ukraine in the struggle for Crimea

While crushing it at home.

He is slowly losing his mind.

And the last thing he needs is even the usually docile MSM making it sound like him and his faithful Pierrot are trying to make it easier for criminals to steal the next election.

Introducing Bill C-23 last month, Democratic Reform Minister Pierre Poilievre said that he wanted to “empower law enforcement with sharper teeth, a longer reach and a freer hand.” The principles are right. But some of the bill’s fine print is of a different spirit. For example, though the bill introduces new offences and increases fines, it also reduces the investigatory powers of Elections Canada, an independent organization that reports to Parliament.

The bill would take one of its arms – the commissioner – and move him into a branch of government, the Office of the Director of Public Prosecutions. It’s hard to see how this division of what is now a single investigative authority improves the current situation, and it’s not difficult to imagine how it might end up doing the opposite, impeding the pursuit of wrongdoers.

So much for Mr Law and Order.

Or in Polly's case so much for Mr Clean...

And to make matters even worse, Harry Neufeld will be back next week to finish the demolition job he started. This time before a House Committee.

The opposition parties have former B.C. elections chief Harry Neufeld at the top of their witness lists for testimony on proposed Conservative election law after he warned that “well over 100,000” electors will be denied their right to vote if the government goes ahead with plans to prohibit voter vouching for electors with no official ID.

Which should make even MORE Canadians wonder whether the Cons are trying to steal the next election, just like they tried to steal the last one.

And have Big Daddy either wondering whether Poilievre is the right man for the job.

Or whether he should his fire his faithful disciple, step outside the Con mob, and hire a Russian Sicilian hit man to finish off our democracy. 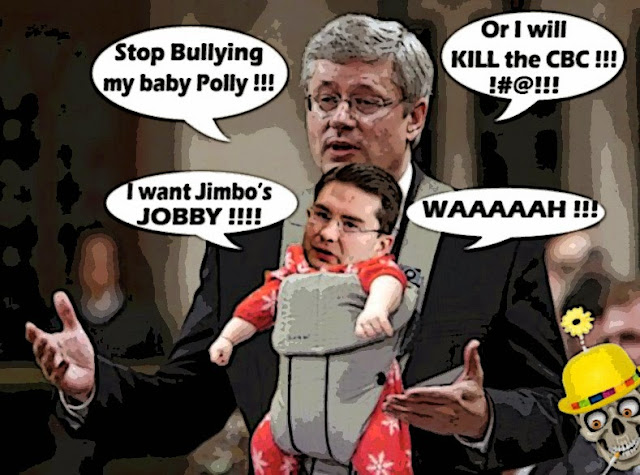 Which I'm sure you'll agree should get the new session of Parliament off to a hilarious start.

And leave Poilievre pondering the ironies of history.

The bill that was supposed to MAKE him, could be the one that DESTROYS him.

And helps bring down Big Daddy and his whole rotten mob.

Golly. Are you enjoying this Con clown show?

Peeair is in way over his head. He needs to look deep inside himself to find the root causes of his incompetence. Well it's simple. The only reason he's a minister is due to his ability to obey Dear Leader. Be it fetch, speak, sic-em, rollover, or just warming Dear Leader's lap. Your a good boy Peeair, yes you are, now fetch me the latest poll numbers.

Just a few thoughts thrown together! The cons under Harper who kow tow to him are obviously all dysfunctional individuals! It can't be anything else! They are all power hungry people who are in politics for what they can do for yours truly and not for what they can do for the Canadian people. That's for sure! In the end, they will destroy themselves. And, the end has begun. Look at Flaherty, he has become a most hated man by Canadians! Eventually, the steam is bound to build up and explode against Harpo! I don't know if anyone else noticed this but I could feel the hatred that Flaherty felt towards Harpo towards the end when they sat side by side during Question Period. It will get there with Pollievre but what he will do with it is anyone's guess. The man has been dishonoured. Can anything be worse than being advertised as a paper towel used to clean up whatever! Well, I cannot feel sorry for him because it's his doing. The Canadian people are fighting back any way they can. Rick Mercer is a hero! Others have been humiliated because of Harper. What about that embarrassing Valentine with Harpo, James Moore, and Jason Kenney? All three of them naked! This has never before been seen in the annals of a Canadian government. Awful! I don't see these two guys as being forgiving. This was so shameful! No matter what they do, they will never live this down! I see these two as being part of the bunch who could turn against him. The people who associate with him end up being dishonoured either because it's the price they pay for their hunger for power or because they just simply placed their eggs in the wrong basket! Of one thing we can be sure of, humans being humans, there cannot be any love lost between Harpo and his Cabinet members.

You'd think the federal Cons would grow a set of whatever they grew in Alberta and get rid of a leader who isn't doing the country any good.

The Reformist Albertan Base is addicted to the Harper Canda Kooleaide! One day it may cause their already feeble minds to implode. Liberally speaking of course!Hey ho Da Harper Boyz and Goilz must go!!!