Stephen Harper and the Con War on the Economy 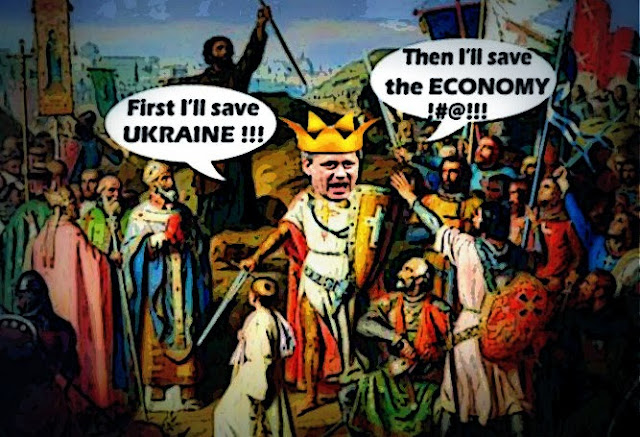 Well he's off to Ukraine today to try to pose as Great Warrior Leader by inflaming a dangerous crisis for crass political gain.

Which is scary enough.

But there's another scary story doing the rounds in Ottawa.

And that's the one about how Stephen Harper wanted to replace Jimbo Flaherty as Finance Minister with nobody less than HIMSELF.

But then why should anyone be surprised eh? When as Thomas Walkom points out in the Con regime Harper runs everything.

On Monday, Stephen Harper was in charge of government economic policy. On Wednesday, the prime minister was still in charge.

Which is another way of saying that the sudden resignation Tuesday of Jim Flaherty as finance minister doesn’t mean that much. No matter who gets to make the annual budget speech, this is Stephen Harper’s government.

Everything is done for crass political gain.

Every proposed change in spending or taxation must undergo a simple political litmus test. Will it help the fortunes of the Conservative Party? Or will it not?

And the only reason the hapless stooge Joe Oliver got the job is because he's no threat to Harper's leadership. 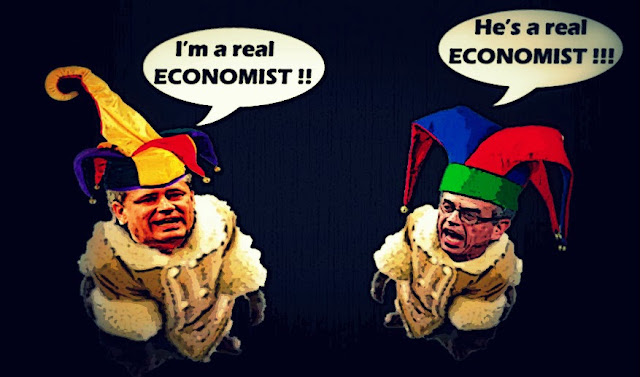 As will Tony Clement the hapless gazebo king who is running the government into the ground. 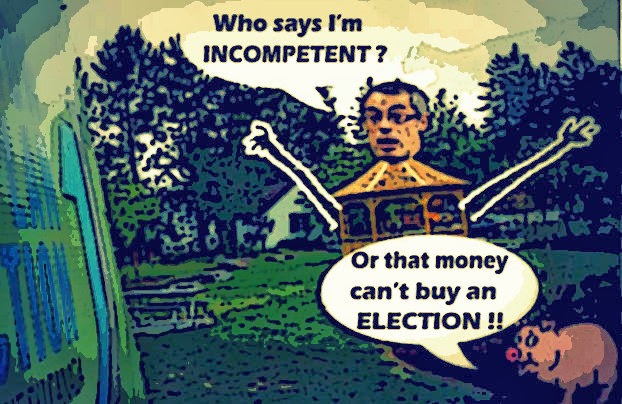 The Conservative government could be moving too quickly to implement some of the contentious cuts announced in the 2012 budget, planning documents suggest.

Because as the great Kevin Page points out, the Cons are making it up as they go along.

“For me, it strongly suggests that the government’s fiscal strategy … came before, and possibly without, the development of a business transformation plan,” he said Thursday. This means departments will have to absorb the cuts regardless of whether they are able to maintain current service levels to Canadians, he said.

Slashing services and killing jobs, even though our economy is on the ropes, just so they can have a stash of cash to bribe voters with in the next election.

And we can expect more of the same from Joe Oliver. Even if it means supporting the Con regime's income splitting plan which would only benefit a handful of wealthy voters.

Joe Oliver has never really been the type to paddle against the current. So it's not super surprising that Stephen Harper's new Finance Minister has come out in favour of family income splitting, even though the $3 billion Mad Men Giveaway has been criticized by think tanks across the ideological spectrum.

Because in his previous job he showed no evidence of being capable of independent thought.

Or for that matter, much thought at all...

God help us all. And as I said the other night start stashing your money in your mattresses.

No wonder the Cons had to secretly swear him in. No wonder Stephen Harper was thinking of appointing HIMSELF.

And the good news? Great Economist Buffoon Leader won't get away with it.

Joe Oliver will make it even more obvious who is really running things.

And the economy which once helped make Harper.

Will in the end destroy him... 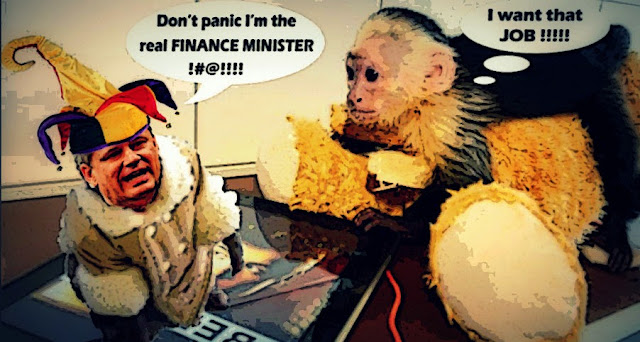 "
The Chicago School (whose principles ran Chili under Pinochet and Russia under Yeltsin and many others) says governments must shrink. The three principles are deregulation, privatization and austerity. Small government that supports only the military and law enforcement. Brought about usually with CIA assistance. You think he's a puppet PM like you would find in Iraq or Afghanistan now and perhaps in Ukraine. You can tell I'm reading Naomi Klein, that wonderful author.

Hey, Simon: On a day when the Supreme Court just delivered him a big slap on his face and rejected his appointment to the Supreme Court, or when a part of his country is in the process of possibly electing a government that could break up his country, or when the second biggest rat on his sinking ship, Brother Jim, apparently had a Jesus moment and just took a running jump into the water a few days ago and is now swimming furiously for dry land, or when his former appointees to the perennial fountain of public goodies, the Senate, are either being charged or being investigated, or when his other appointees are also being charged (Carson) or likely awaiting being charged (Porter), where is Great Warrior Leader?

Answer: He is off to the Ukraine to further inflame the extreme right wingers, Neo Nazis or Neo Fascists who are members of the Kiev government and pretending that he is standing up for the democratically oppressed of the world.

Either he is delusional and living in a parallel universe where everything is hunky dory or he apparently does not really care what happens to his country and just cares only about his own agenda and those few that he serves.

Either way, I suspect that he knows his days as Great Leader are numbered.

Watch the fun as the other minor rats now start to fight viciously among themselves to be Captain of the sinking ship while the rest of us wonder why anyone would want to go down with a sinking ship when Great Leader would probably have bailed out by then, eh?

ya know, in the thesaurus next to the phrase "witless buffoon", they have oliver's picture as the explanation for that phrase. A stroke of pure genius on the part of the author, I tell you! Mazeltov!

Huge Federal budget deficits every year since 2008. Canada's Federal debt has grown by $150 billion since 2006. Not great fiscal management.

It is how you look at things Simon. Harper has accomplished much in his reign, against the problems Martin government left him.

The (insidious) Liberals left a surplus for Harper as they knew his policy was to reduce the deficit, and Chretien refused to allow bank deregulation, so that as the banks failed worldwide, our banks were spared. Hardly anyone that was among Harpers economic equals was aware of problems within the financial sector, so it was obviously a surprise when the world wide collapse happened. Our banks remained strong, which made justification for bailing them out extremely hard, but Harper managed to do it.

The policy of the Conservatives has always been to balance the budget. When Harper came to power Canada had a surplus and a strong economy. PM Harper was not able to even deal with his budgetary strength for several years into his reign. Luckily the surplus that he was left was able to make erode, and he was able to run up record deficits that he could now focus on reducing.
Harper has also done his best to make us the equal of other nations, by cutting services, creating widespread suspicion of our political system, by fueling separtist sympathies in different areas of the country, attacking our right to fair elections, creating inequality, by attacking and politicising our judiciary, handcuffing our media and spying on our citizens. I also suspect that he is short sheeting my bed at night, but it may be someone else.

This is to further to strengthen Canada's rank at the top of third rate petrostates, rather than be a follower in a first rate state.

As they say, better to rule in hell than serve in heaven.

What the hell is Oily Joe looking for, his false teeth? His trifocals? Someone call the long term care facility to see if anyone's missing. Can't wait for his first budget, provided he remembers to bring it.
So "The Scarf" is joining Dear Leader on his trip to Ukraine. How fitting that Dumb and Dumber who both compared Putin to Hitler will be there for maximum pot-stirring effect and the million dollar photo-op. Disgusting.

The pictures were a great way to give us a laugh. Made my day.

Then went through a few more articles and saw Rocco Gilati struck another blow for freedom and won his case against the Harper slimers. Oil can can't retroactively impose laws or appoint his latest anointment to the Supreme Court of Canada. A great big thank you to Mr. Gilati.

I say that every day, Simon. God help us. Then someone like Mr Galati does their civic duty. The others, who are writing public letters on 'con electioneering' (we're being watched by many, including the UN) who actually believe in the concept of "best practices"; well, that's about time too. The few groups with credibility, clergy included, have waited far too long to speak up. Don't they want to 'blow the whistle? Some things now, are totalled beyond belief. The rest we fight for.