Stephen Harper and the Great Illusion 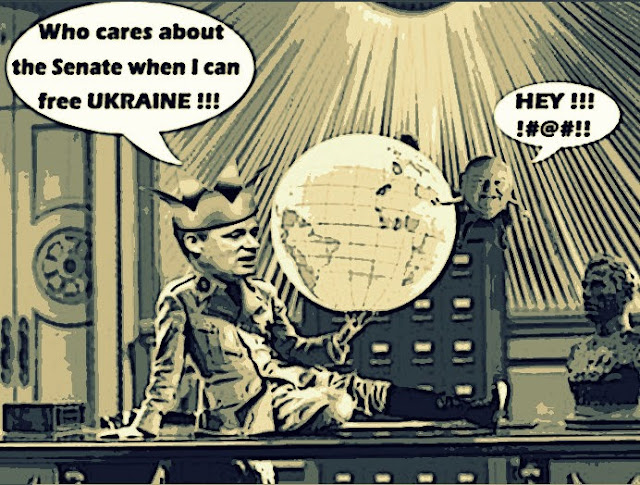 Well he must be feeling pretty good these days. It must be his happy hour.

Parliament is shutdown so he doesn't have to answer any questions about any of his many scandals.

Or his foul voter suppression bill.

Instead he can pose as a champion of democracy in Ukraine, harvest the ethnic vote, and dream of stealing the next election.

But unfortunately for him it is too good to be true. It is just an illusion.

Because there's always Rob Anders to remind us the Cons are crazy and dangerous.

His job numbers are tanking.

The Parliamentary Press Gallery is revolting.

The Parliamentary Press Gallery is pushing back against the Harper government’s unprecedented and sweeping control over access to government officials and information.

Journalists unanimously passed a motion on March 7 at the Parliamentary Press Gallery’s Annual General Meeting asserting the right of journalists to ask questions “in all photo-ops and availabilities with the Prime Minister, Cabinet ministers, and all Parliamentarians, to fulfill our functions as journalists in a democratic society.”

A former Conservative official in the Senate has been charged with fraud and breach of trust for allegedly receiving payments from two organizations that had dealings with the federal government.

So soon after this one.

And it won't be long before the whole gang is back. 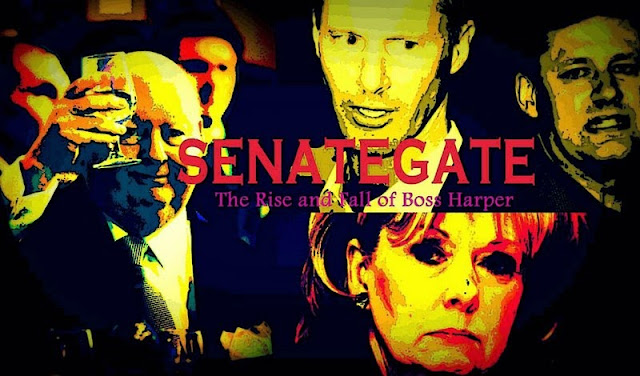 Because he can run away to Ukraine, or Israel, or wherever. But he can't run away from them.

They will return to haunt him. And his happy hour will be a short one.

But then why should we be surprised? When it is only an illusion.

Stephen Harper's foul Con regime is so corrupt and tired it's beyond saving. Give it a few more months and the stench of decay should be overwhelming.

Because luckily for us you can't put lipstick on that old pig eh?

Cons are cons. Tories are Tories.

And the party will soon be over...

Presented with the opportunity to serve Canada and Canadians, with distinction ..
and without being shot at or blown up.. or patrolling the arctic or maritime coasts
or protecting pristine rivers, lakes and aquatic habitat.. or migratory caribou or beavers
or ensuring our elections remain fair.. or pensions are paid, our questions & concerns answered

.. uh .. our so-called federal government politicians.. elected public servants .. flocked off
gathered like chickenshit under the feathered arse end of the Stephen Harper Government
which is no longer 'our' Canadian Government .. but his .. (mainstream media is OK with this coup !!)

This is the wimpiest, media coddled bunch of pretenders and scumbags Canada has ever seen..
Their 'values' are Canada's Values.. ??? Oh get a grip ... these are delusionists.. cowards
and after being in power for years .. still unable to steer a country, be honest in any single way..
incompetent, ridden with entitlement, narcism and fantasy .. just like their hero & master

Cowards, Liars and Incompetents .. in charge of Canada ..

(and when will Canada kick their miserable arses ..??)

I certainly hope most if not all Ukrainian Canadians are not being taken in(except for us paying the bill for his highnasses flights etc,) by this flagrant attempt to harness their votes in 2015.

We need Harper to warble out "Give peace a chance" to Putin and once Putin is on the ground pissing himself laughing, get "The Scarf" Baird and Pee-air Pollywog to tackle him.

Simon its all about the sky god. there as you and I say an alternative, but people will have to read what I say
http://thinkingaboot.blogspot.ca/2014/03/connecting-dots-paints-picture-of-great.html

Simon we can all get behind a movement to ban and fight anti human activity. What is lacking in every prescription I have take reecently is a system that is a solution we can all get behind. Now its not a simple thing like Braveheart to rally the troops but to defeat Steve Haper you have to go out ona limb and dercribe the world in detail as it would exist without toxic hi,m/ r
http://thinkingaboot.blogspot.ca/2014/03/connecting-dots-paints-picture-of-great.html

We all know, Harper does nothing out of the goodness of his heart, for one thing he has no heart. He is just using the Ukraine for votes and donations from the Canadian Ukrainians. Just as he did with the Jewish people, he used while in Israel. Harper has also brought over thousands of Chinese, gave China our resources and resource jobs.

Harper has the gall to think, he is better than Putin. Preaching on Putin's lack of democracy and of Putin's aggression in the Crimea. Putin called Harper and Obama, the fascist West. I wonder how many countries call Harper a fascist?

Harper had nothing to say about China's Communism and aggression towards other countries, their lack of democracy and Human Rights. Harper invited Communist China to set up shop, right upon our Canadian soil. Selling our Canadian farms to China because, they polluted much of their farmland and 40% of their water. Dead pigs come floating down China's rivers. We don't want that to happen in our country.

Harper is a total hypocrite, flapping his face off about Putin. If Harper's mouth was a little bigger, he could get both of his feet in it. Harper and Baird have no business sticking their long noses into that dispute. Those two are always an embarrassment to this country, everywhere they go.

I only hope the Russia, Ukraine and Crimea situation, can be settled peacefully.

start another war? Hell those Conservative idiots haven't taken care of the last war's Veterans. The Armed Forces have enough walking wounded around. They don't need more. If some of the Cons want a war, let them go and volunteer themselves and join the army in the Ukraine. Ya, I know none of them will be. They love to start wars, they just don't know how to deal with the blow back.

There maybe a time when war is necessary, but right now, not so much.

hi salamander...yes I agree delusion is probably a better world. It goes better with crazy. ;) But as to when we will kick their miserable asses. Sooner rather than later...

hi ron...I doubt it. I'm sure they are glad our government is supporting them, but they must know that Harper is only doing it to buy their votes, and they must be afraid that he will only make a bad situation worse...

hi anonymous...you know now that you mention it as bad as the situation is it could be worse. We could deploy Pollywog to lecture Putin about the merits of democracy. That would be The End... ;)

hi steve...you really are a very poetic person. But although I'm an atheist I might drop a little note to the sky god to please save us from those maniacs...

hi steve...the movement that is emerging will indeed ban all anti-human activity. Because there is no crime greater than threatening human survival, and the penalties will be severe...

hi anon...you're right Harper has no principles, and it is yet another example of him turning our foreign policy into a vote grubbing scheme. But the situation in Ukraine is tragic and dangerous, and let's hope it can be settled peacefully...

hi e.a.f....the last time a war was necessary was the Second World War. And the Cons are the last ones who should help start another after losing the one in Afghanistan, and betraying our veterans so miserably...

hi anon...wow that's amazing. Good for you. It's such a great video and we can't spread it around enough.
Of course, I am incredibly envious... ;)

Harper, and Obama, see every problem as a black and white exercise, but there is an awful lot of grey about the situation in the Ukraine. While I can understand the proWest leanings on the Ukrainians, I also wonder about the consequences of joining the West and greater austerity under the financial rules that would be imposed. My understanding is that China has offered Ukraine a deal that is much better economically than what the EU or IMF has offered. Naturally government leaders are after votes, but I do wonder what we are not being told or what "facts" are false.

Putin is an odious gangster and a narcissist, but he is not a stupid man, no matter what Merkel and others try to portray. He is to my mind, no worse than Harper who fails at being democratic, or Obama who has given himself the right of executioner. As far as the referendum, the west has not only backed a illegitimate revolt, if Egypt is taken as a Harper government example, it has previously accepted as legal and democratic the elections held under occupation, and even encouraged them, in Afghanistan, Iraq and even in Palestine.( in addition The west even worked to overthrow the democratically elected government of the West Bank, providing the arms and ability to oust Hamas; not by a citizens revolt but by a rival political party).

While I hope that the problem is resolved in Ukraine with a workable solution , I do fear greater financial control by the West- with it's focus on greater austerity and income disparity- will continue the current situation of governmental corruption and stagnation that sparked the revolt in the first place, while making it harder for the voice of the people of the Ukraine to be heard in the west world press.
Anyone hear anything about Greece lately?

IMO Ukraine and crimea and russia have to be resolved by the principals who are historically and traditionally involved, not by tinpot leaders in other parts of the world sitting on their Kohler thrones forming policy.

Hey Simon, Peeair and Putin would find they have a lot in common and Pudge would get jealous, besides, who would fetch Pudgy's poll numbers for him? "The Scarf" keeps biting the mailman so he's out, hmmm...