How To Move Young Canadians To Help Defeat Stephen Harper 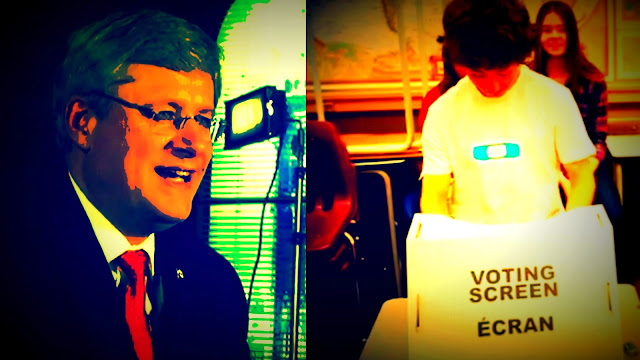 It should be obvious by now that the key to winning the next election is getting out the vote.

For why else would Stephen Harper and his Con regime be going to such desperate lengths to suppress it?

And there isn't a group that needs to be encouraged more to vote than young Canadians.

Not just because, as a new study by the pollster Nik Nanos suggests, they can make a huge difference.

Working with Kevin Page, the former parliamentary budget officer, on a project aimed at engaging youth in the political process, Nanos has mined data from his daily polling during the 2011 campaign as well as research done for the Institute for Research on Public Policy to answer the question: What if 60 per cent of young people had voted?

But also because as Nanos points out, their involvement can change the tone and content of the political debate. 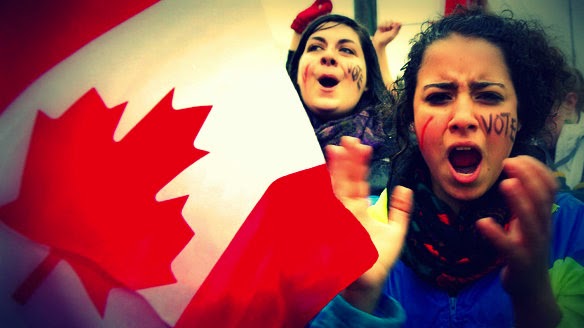 And our political scene badly needs an injection of hope and optimism.

Because we are an aging country, and with an average age pushing fifty, hope and optimism can be in short supply. Or at least harder to find than it was in the 60s when the average age in Canada was in the twenties.

All you have to do is check out the political  blogosphere, and other forms of social media, to see how that's affecting not just the content but the tone of the debate.

It's getting awfully gloomy out there. Almost as gloomy as this Winter from Hell... 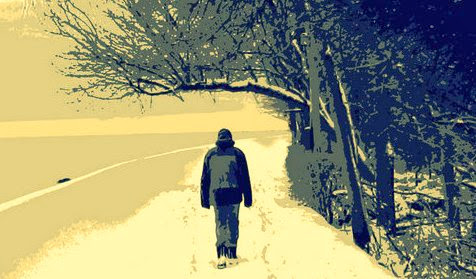 And when I look around, I see a lot of older people reciting a litany of doom and gloom, taking only to others their age, and almost competing to see who can venture further into the Valley of Despair.

Now I don't mean that as a criticism, or if it is it's a gentle one. It's only natural that you don't feel the same way at fifty than you did when you were twenty. Nobody has to apologize for being older, or younger. And I am generalizing.

I know some seniors who are younger in spirit than some of the struggling young people I know. Including some old but still fighting vets with whom I'd rather share a trench with than just about anybody else.

But the general mood is pessimistic. Too many older Canadians are in their silos, contemptuous of the young. Too many young Canadians are nowhere, lost in our shallow culture, or buried in their mobiles.

That ghastly gloom reflects itself in the way our political parties tailor their messages. And it's no way to attract young people into the political process.

While the mechanics of voting are important, Nanos said his research suggests political leaders could do more to engage young people simply by talking about the issues that concern youth and adopting a more hopeful, can-do manner.

Because if you want them to engage them first you must move them with a hopeful vision of something greater.

Which is why I try to remain as hopeful and as positive as I possibly can on this blog. Even when the horror of living in this filthy Harperland depresses me beyond belief.

Because I know the power of hope and optimism. I know that when you fire up their idealism, young people can engage in the political process in a truly amazing and creative manner.

I know that if you move them, there is nothing the Cons can do to suppress them.

I saw it with my own eyes in the streets of Montreal... 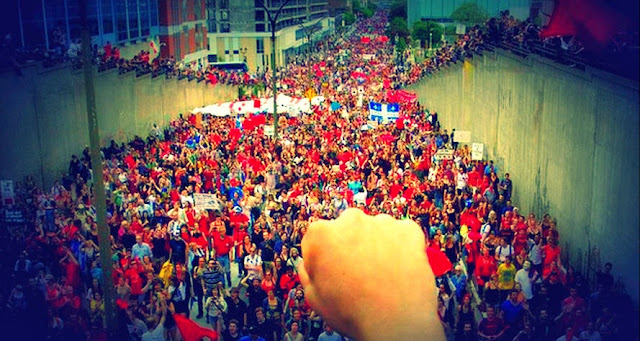 I saw how a student movement grew to become a movement of people of all ages... 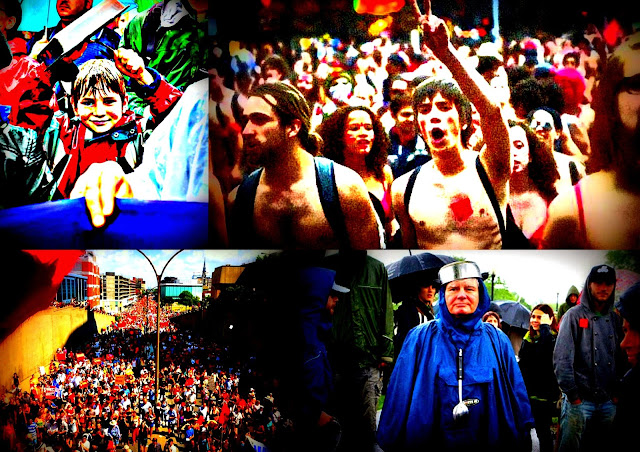 I saw how a student strike evolved to become a debate about the real problems of our society and our world.

And how it couldn't be shutdown no matter how many thousands they arrested... 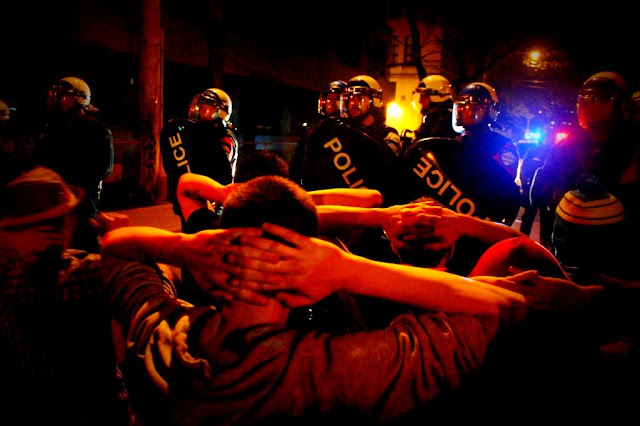 And I will never forget the day, two years ago yesterday, when an army of the young came marching down the road...

Nothing before or since has given me more hope that we can tackle the real problems that threaten our country and our planet.

Nothing convinced me more that what happened there, can, will, and must happen again.

And few images moved me more than this humble little video all the way from Vancouver...

Because solidarity is EVERYTHING.

Young and old can learn from each other, and encourage each other.

They can march down that road to a better future together.

The Cons are afraid of the youth vote, with good reason. That's why they are trying to make it harder for them to vote.

But united we can crush that ghastly regime. 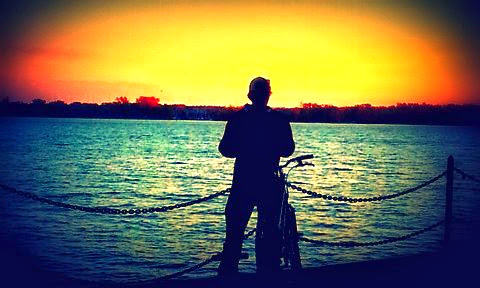 I train and supervise students in my job and will be continuing to urge them to get involved and inform them of how Stephen Harper is destroying this great country. One doesn't have to look to far for evidence of this due to the daily dose of scandal this corrupt bunch heap on us.
In 2015 we must "Heave Steve"! Either by vote or my preference would begin with "Mr. Harper, you have the right to remain silent..."

If the young people show the same solidarity in getting out to vote harpie and his crime cabal out of office in '15 that they did then, Simon, harpie and his bunch will end up in prison and on trial for treason against Canada.
I hear them all too often say "it doesn't matter" or "it won't change anything" regarding their one lone vote but if 3,500,000 of them all cast one lone vote against the dictator and his illegal crime cabal "government", I'm willing to bet some serious money that it will matter and does change things on a HUGE scale and I'm not a betting man.

Justin Trudeau has nothing to lose by standing up in front of the camera many times in the next year and saying over and over again.......

"Canadians, under 25, get out and vote, tell your friends to vote, voting is cool because you have a choice......."

That's why I think the concept could be in Dreamland. Even Mulcair, if he could shed his 'harrumph' mode, should be saying the same. In fact, someone should start the 'Young Voters of Canada' party which would scare some politicians because a new 'block' of voters could support them or turf them. Key word: re-enfranchisement.

I like the idea, the youth vote could be captured by a new party the same way cons always get the oldsters to vote for them. I mean call it the tweeter gen party or whatever....something progressive and fun, and perhaps ask Nathan Cullen to move from the NDP to the new party as he is a strong environmentalist. anyhow great idea, the youth need to be re-engaged....or for the newbies...just engaged. and JT Might do it but not sure his policies are that much different from other libs, the cons or the ndp, and he has come out in support of the pipeline and thats not a popular stance amongst the under 40 crowd

New and Improved Bumper Sticker for the Young Voters of Canada Party!!! "Anybody But harper!"

Excellent presentation, Simon, on the right track! I take away - Re-enfranchise Yourself -
HEAVE STEVE!!

hi anon...that's great news, the more we can help young people understand what Stephen Harper is doing, and how it will affect their future, the easier it will be to get them to turn out in numbers that can help sink the Cons in the next election. Like you however, I would also prefer to see this nightmare end with "Mr Harper you have the right to be silent..." ;)

hi anon...it is true that many young people don't understand why they should vote. Part of it is their fault, but most of the blame must go to the political parties and others who haven't made enough effort to reach them. As I said in my post, young people tend to be idealistic so to get them to vote first you must move them. When I have the time I'm going to make some videos to try to show what I mean. But in the meantime everyone can help spread the message but taking some time to explain the situation to any young people they know...

hi anon 9:33....I agree with everything you say, and we can't get that message out soon enough. Young people can be reached, but the messages have to be tailored to their view of the world. I've been examining how that's done in other countries, and as I told that other reader I hope to have some videos soon to try out some new ideas.....

hi deb....most young people are naturally progressive, but for the reasons I mentioned in my post, they haven't been made to feel that their vote is important and can make a difference. So I think messages that are aimed at them must contain two elements. Examples of how their lives could be affected by not voting, and a vision of what kind of better world they could help create...

hi anon 4:27...yes I think that would be the kind of bumper sticker I should like. But I encourage everyone to come up with slogans that can condense the message as powerfully as possible, and break through the clutter of our modern lives. There are so many reasons to get rid of the Cons, but the best messages work by summing it all up in one slogan or other. The Cons are pretty good at hat, but we are more creative, so we can do better...

Ms. Marois is doing oil can a great favour by trying to ensure some students don't get to vote. Young people will now clearly understand some politicians don't want them to vote. They want to disenfranchise them. It maybe just what the university crowd and their like aged cohorts need to change this country.

hi liberalandlovingit...I enjoyed writing this post. It wasn't easy because I didn't want to offend anyone. But I wanted people to understand the problem we face motivating young people because we need to start working on ways to engage. It won't be easy, a lot of young people I know are having trouble just surviving in our low wage economy so it isn't easy to reach them. But I am pretty optimistic that we will be able to reach enough of them to make a real difference in the next election.I personally herded six of my friends to the polls, which I admit was a bit like herding cats. But in the next election I'm aiming to personally deliver at least three times that number even if I need a cattle prod. I'm a pretty gentle guy, but when it comes to defending our democracy I can be pretty fierce. You WILL vote or ELSE... ;)

excellent simon and if not a cattle prod, try some positive reinforcement by promising them you will host an after the vote potluck dinner party:)
and yeah I remember those days in university, my friends didnt vote. They talked endlessly about what the world needed but didnt bother to cast the ballot.