The Mother, the Soldier, and the Con Suicide Scandal 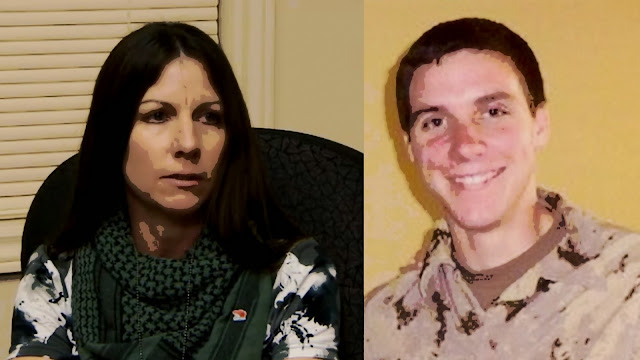 I'm glad the mother of Cpl. Justin Stark decided to speak out about the one-cent cheque the government sent her dead son.

And that the Cons were forced to apologize, for the pain that was caused.

The mother of a dead Hamilton, Ont., soldier who received a cheque for one cent from the federal government has accepted an apology from Defence Minister Rob Nicholson but said the incident has reopened wounds.

So hopefully it doesn't happen again, because it has happened before.

Kelly Carter, a Canadian Forces member from Alberta, sent CBC News a copy of a nearly identical cheque for a penny he received in January. It's also marked "CF Release Pay," just like the cheque sent to Stark.

"I don’t believe anything the Canadian Forces say, they lie through their teeth," Carter said in an email. "Staff tell ministers lip service to make them happy, but the same problems resurface again. What a waste of time, money, resources and paper."

Which is absolutely appalling.

And the other reason I'm glad that suffering family decided to speak out is because they have also helped shine a light on the scandalous way the military treats the families of soldiers who commit suicide. 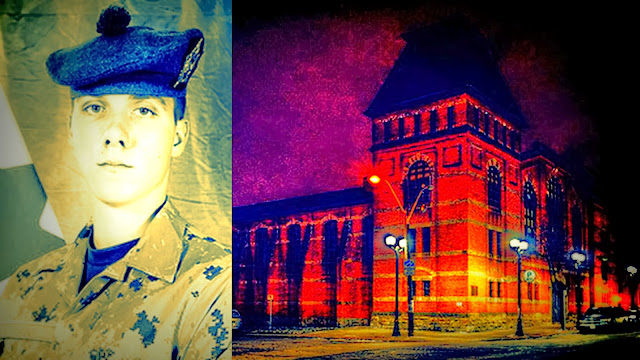 As of now, Stark's death isn't considered "military related," even though he shot himself in the armoury in Hamilton while on duty, Marston said. Stark's family has been dealing with inquests and military tribunals about the incident for years.

"Almost a year after we were briefed verbally by the board of inquiry about its findings, we still await confirmation of a final report," Stark said. She and her husband still aren't satisfied by the board's "confident conclusion" that her son's tour in Afghanistan did not cause him trauma.

When all their families are seeking is simple recognition.

"There is no financial gain for Justin's death being linked to his job or his service," Stark said. "It only involves having the recognition that those who died in theatre also have."

And this is simply outrageous.

Marston says there are 50 similar investigations happening in Canada right now about military suicides. "We have a full-on crisis happening."

For how long must they drag their feet, and how much more must those families suffer?

Of course, I have no idea why Justin Stark, seen here just before he left for Afghanistan, killed himself. 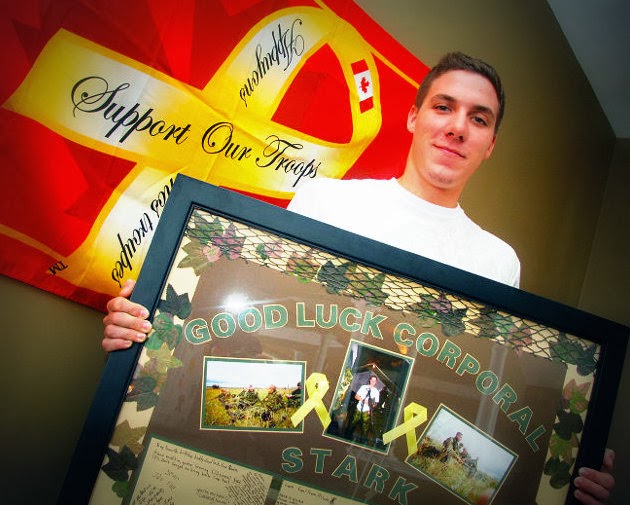 But I do know that during his seven months there he served with a battle group searching for IEDs and suicide bombers.

So post traumatic depression must surely be considered the main suspect.

And I also know that we're not doing enough to identify and treat the problem. Because I've seen the horror with my own eyes.

So to any suffering soldiers out there I would say this: remember help is available.

And to the wretched Con regime that betrays veterans of all ages, and the useless brass buttons at DND, I say this: in the name of human decency and our precious Canadian values, do the right thing. For once.

Because Justin Stark and his family deserved so much better, and so do all the others...

As the Canadian Press reported a few days ago, the military has never met its target of 447 mental health workers, set a decade ago as the Afghan war began to heat up and before stress injuries mushroomed. There were 388 mental health staff last month. And a year and a half after the government committed $11.4 million to address the shortage, the military is just now getting around to hiring 54 more people. It has been a glacial process.

if it was a disease which had caused all these deaths there would have been much more action. However because this is caused by a mental condition it is still seen by many as a "weakness". then of course these Veterans has served their purpose and are of no further use to the federal conservatives. They keep giving lip service but nothing changes so you know what they really think.

Sending a one cent cheque to the families of veterans is what they really thing their family members are worth. They are dead, no longer of any use to us. Its like when the Titanic sunk. The company sent the families of dead crew members the cost of the buttons on their uniforms. Nothing has changed amongst those who run things.

if the government was truly concerned about the one cent cheques they would have issued a memo to all staff telling them to review files and any which might be "sensitve" to send them to managers who could make a final determination. The Cons haven't done it because they don't care about Veterans. We saw that as soon as they started trying to pay them off and get rid of them with a paltry $250K cheque. Do not expect anything to change. We may well see 5 or 6 suicides per month but the families will still be treated like dirt. There still won't be enough mental health professionals to treat active and Veteran armed forces members. The federal Conservatives just don't want to spend the money. They want a surplus for the next election and a few dead Veterans isn't going to stand in the way of that happening.

Simon, thank you for speaking up for our veterans!

hi David...I seas going to put those figures in but I ran out of time. Because I have had to shepherd a friend through that system I am only too painfully aware of its limitations. It's a real scandal. One in five Canadians will be affected by some kind of mental illness during their lives, and yet the system we have in place is totally inadequate. You leave a shining emergency room, and enter a mental health area, and it's so horrible and old and so shabby. I can't stand to see the mentally ill treated that way, and although I don't write about it much, it's one of the things I care about most...

hi e.a.f...you're right, as I just told David, it's like there are two parallel systems, one for treating illnesses of the body and the other for treating ones of the mind. And they are not in the slightest way comparable. There is too much stigma, and not enough resources, and believe me I'm not quiet about it. We need a whole new approach to treating mental illness because there should be no shame and much much more kindness...

hi anon...you're welcome, it's both a pleasure and an honour. It infuriates me to see people who have served their country so honourably being treated so shabbily by those ghastly Cons. But I love the way the veterans are fighting back and I'm with them all the way...