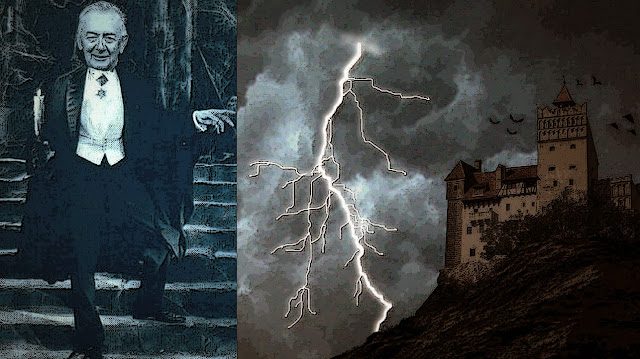 As you probably know the Preston Manning is holding a big Con Conclave in Ottawa, and it's not just the hookers who are quivering with excitement. So are the pundits and poobahs.

Because it's the BIG EVENT !!!

Given the potential for spirited and substantial political debate, is it any wonder that ManningFest has become one of the hottest political tickets in town?

Which in itself tells you how low we have fallen eh?

And that's BEFORE you check the guest list and discover that Mark Steyn is one of the main speakers... 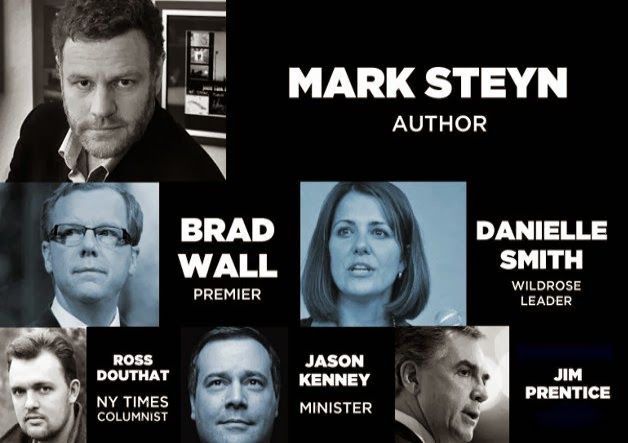 And that the Con parson Preston Manning has been scraping the bottom of the barrel...

Uh oh. Another fallen parson. Preston Manning invites Mark Steyn to speak at his conference. http://t.co/qfKbQwQYNa Pray for him everyone.
— Simon (@montrealsimon) February 28, 2014


But of course Stephen Harper was praying that this sordid gathering of the Cons would give him and his sagging government a boost.

And sadly for him, in that regard, it's been a total BUST.

Because first the PMO deployed their new weapon, Laureen Harper, who has been getting a bigger and bigger role in all their propaganda.

But her story about the dogged loyalty of Harper's boy wonder Ray Novak left all the ambitious young operatives at the Conclave reeling.

"He showed up at the office to volunteer on my husband's very first leadership campaign. He was a skinny little kid from the Ottawa Valley. And his first job -- I love this -- is we told him to take the flies out of the light fixtures. I love that story. It just shows that if you work hard and put your nose to the grindstone, who knows where you can be."

And left others questioning Harper's judgement... 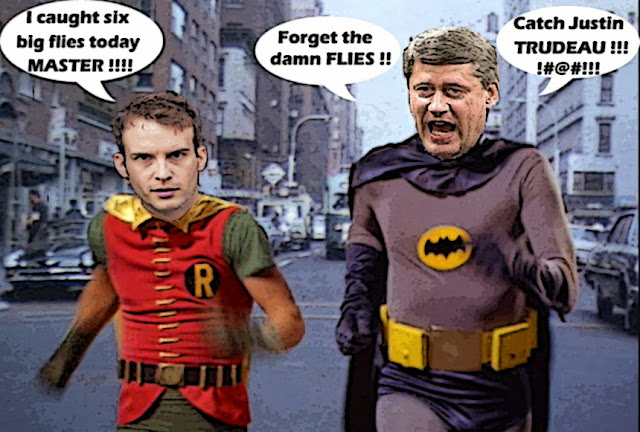 Or trooping over to get drunk or whatever with his other famous appointee.

And then, speaking of brass poles, down came the pollster bearing the bad news. The Cons are tanking.

A longtime conservative pollster is warning the movement that the Liberals are seeing a resurgence, and it's not just a flash in the pan.

His online poll of 1,000 Canadians found that 31 per cent of respondents identified as Liberals, compared with 26 per cent for the Conservatives and 18 per cent for the NDP. He conducted the poll from Dec. 16-18.

And he isn't a Great Economist Leader anymore.

What's potentially more worrisome for the Conservative government is that on the top concern for the public — the economy — respondents scored the Liberals higher in their perceived ability to handle the issue. "Control of that particular issue has been lost to the Liberals," Turcotte said, noting the Liberals also rated higher on health care.

Which must have been devastating after trying so hard, and spending so much of our money to try to create that false impression.

But ironically, it was Jason Kenney, the man who is so desperate to replace him, who delivered the knockout blow.

By declaring that the Con's flawed income splitting plan wouldn't just reward the wealthy. It would also reward "stable families." 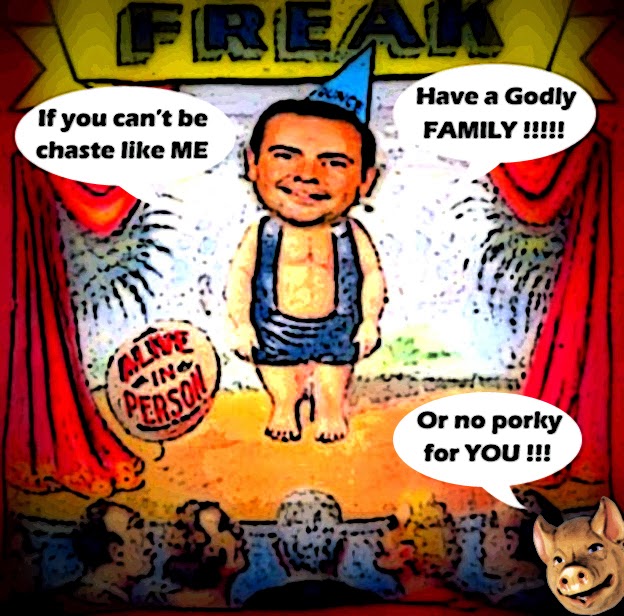 Employment Minister Jason Kenney praised income splitting as a benefit for what he called "stable family units," all but cementing the notion the government is once again committed to allowing two-parent families with children to shield some of their income from taxes.

"All of the social research indicates that folks that come from stable families tend to do better in terms of their economic prospects," Kenney said.

Which no doubt pleased the Harperite's religious base who want women to stay at home.

The policy particularly appealed to social conservatives because it would reward families where one parent stays at home.

However, the C.D. Howe Institute pointed out income splitting would do nothing for 85 per cent of families, while the Canadian Centre for Policy Alternatives said the policy would benefit only the wealthiest of families.

But will no doubt leave all those other Canadians hearing banjos.

And of course leaves Stephen Harper, who has been flip flopping wildly on the issue, holding the stinky fish... 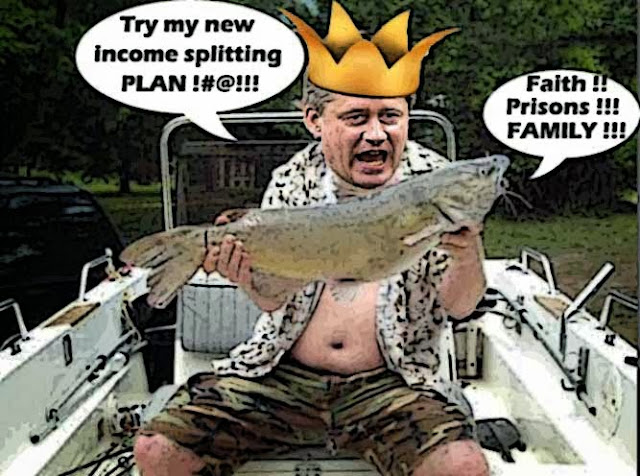 And looking like a desperate leader who will do anything to please his rabid base.

And I mean ANYTHING...


Because that's all he's got left eh?

Oh well, so much for the Con Conclave, or the Cracker Barrel.

It may be the Big Event in Ottawa, but it won't be for much longer.

If that's the future of the Conservative movement. I'm actually surprised harpie and lurean aren't having a public menage a trois with anne coulter. It's about the only gimmick they haven't tried to give harpie's numbers a "bump". But then again, there's even some depths to which even a psychopath like coulter won't sink . . . or aren't there?

Kenney and social research? Like, anthropology? Whoa. More importantly, not a single cent for parents whose children have been funneled into an industrial waste bin with no care no treatment no sun or grass worse than nothing: and not a drop of concern for 'THOSE' families. Hey con's can you please, somehow, find a feeling?? Blind and in the dark.

it is doubtful many will be paying any attention to the little gab fest. most people are trying to keep their heads above the snow. others are worried about what could happen between Russia and the Ukraine. prssie is yesterday's news.

The poll is probably quite accurate. Voters may well believe the federal Liberals will do a better job on health care and the economy. Voters are able to look back and see how things were when the federal Liberals were in power. During the past 8 yrs things have deteriorated for the average Canadian and they will look back on the Liberal days as a better time. What defeated the Liberals was their own "little scandals". Now, however, the Cons scandals are much bigger and their continued assault on democracy frightens people. Of course there is a lot which can happen between now and election day, but if it continues as it currently is going, Trudeau will be raising his family where he spent part of his childhood, just going home.

hi anon...the RepubliCon hooker Anne Coulter is capable of plumbing the depths of even the deepest sewers. And if Laureen allows herself to be used by the Cons in such shameless manner she'll end up in the same place...

hi liberalandlovingit...no the Cons have no conscience. They don't care about all those children living in poverty with single parents. But now that Jimbo Flaherty has been caught offside from his boss, we will certainly be able to use his comments to nail both of those Cons....

hi political junk...well of course that's what I was suggesting in my post. And now I also have the unforgettable image of Ray Novak picking up dead flies. Thank you Mrs Harper !!!! ;)

hi e.a.f...you're probably right, it is a very Ottawa thing. And even if I lived there they'd have to buy me an i-pad or something for me to go. ;) I can't imagine anything worse, than listening to people like Jason Kenney or Mark Steyn. But now the conclave is over, I must say i found it more interesting than usual. Because there is no doubt that the party is starting to look ahead, and the push to replace Harper is beginning...

they maybe pushing but oil can is a big tub of oil and that maybe very difficult to get him to go if he doesn't want to. They would have to find him another well paying job. Who would hire him. No i don't think he will go voluntarily and if there is a convention to oust him, it will be very ugly, so the rest of the Cons will take a pass on that one.

oil can is one of those people who thinks he is smarter than everyone else. Hence his lack of attention to what others think and/or feel. He is always right, so how can they even entertain the thought of him leaving. Jason Kenney may want the job but the base won't allow that and he just doesn't have what it takes to win an election, dido for Baird. Mackay has been relegated to the background, so he isn't going to make it, Flaherty is most likely on is way out, this time physically and the rest of them, aren't strong enough to create an image and win an election.

It's ditto not dido. If you want to have credibility in what you say, than you have too use proper grammer and if possible spelling. I like what you are trying to say, but, it pains me to read it !!