The Homophobe and the Homeless 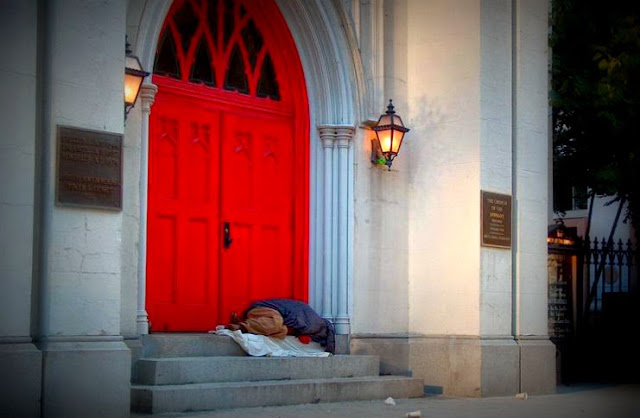 Considering how hard their lives are, and how little they have, and everything Jesus said about that.

But not at this church in San Francisco.

San Francisco Catholic church has reportedly installed a “watering system” that discourages homeless people by drenching them as they sleep.

At random times throughout the night, “[w]ater pours from a hole in the ceiling, about 30 feet above, drenching the alcove and anyone in it,” the station noted. “The shower ran for about 75 seconds, every 30 to 60 minutes while we were there, starting before sunset, simultaneously in all four doorways. KCBS witnessed it soak homeless people, and their belongings.”

And who is the Archbishop of San Francisco? 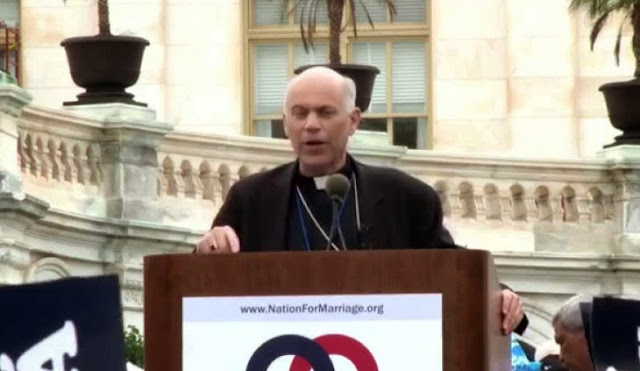 The Roman Catholic archbishop of San Francisco, arrested on suspicion of drunk driving in San Diego in August, has pleaded guilty to a lesser charge of misdemeanor reckless driving, court records indicate.

And even more notorious anti-gay campaigner.

You know, I care a lot about the homeless. I will never accept that there are so many in such a rich country like Canada. 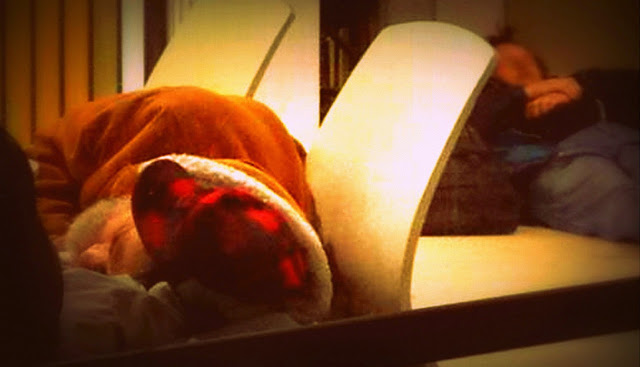 So I watch over those in my neighbourhood, make sure they don't freeze in winter, bring them water in summer so they don't get dehydrated. With the help of my companion Sébastien I treat the ulcers on their feet, and take them to hospital when necessary.

And I'm an atheist eh?

So it disgusts me to see so-called religious people treating them in such a cruel manner.

But I've always known that if a person is a homophobic bigot, that's all you need to know about them.

If Pope Francis is as great as some say he is, he should fire that monster as soon as is humanly possible...

This "person" is a disgrace to humanity! As for Pope Francis......well I read an article not too long ago that he has a 'higher power' directing him and I'm not referring to God. I'm not a Catholic, but have friends who were brought up in the Catholic church. They have told me some not so nice stories about how they were treated by the Brothers/Nuns and it wasn't 'pretty'! Bottom line is you don't have to be religious to be kind, caring and compassionate to fellow human beings.

Which is why I don't understand how these Reform Cons can be so inhumane.......anyone like to explain this to me?

Hugh Segal: "Neo-conservatism, I think is really the aggrandizement of selfishness. It's about me, only me, and after that, me. It's about investing only in things that produce a huge profit for yourself, and it's not about society as a whole, and it tends to be very insensitive to those people who, for one reason or another, have fallen beneath the poverty line, and its engaged in presumptions that those people are all poor because they are lazy. Neoconservatives believe that fundamentally. The truth of the matter
is that the vast majority of Canadians beneath the poverty line in this country actually work. Some of them hold down two jobs, and don't actually get sufficient income in order to meet their basic obligations. So it's a very different view, and I am a traditional Conservative, and I don't apologize for that."

hi Kathleen...is really is appalling, but I just saw a story that the church is taking down those showers. But really what were they thinking? Bt then the Archbishop is a very nasty man, so as I said in my post I'm not surprised by such cruelty....

hi David...Hugh Segal is one of the traditional Conservatives that made that party more Canadian than anything the Harper Cons have ever resembled. I still keep dreaming that the Progressive Conservatives will get their party back, but with the Bloc Alberta I can't see how that can happen...

Simon I always find it interesting how society deals with its vulnerable and who is more vulnerable than the homeless. Some of us extend a hand and try to provide support and as we see in San Franscisco the higher ups in the Catholic church provide only abuse, but the Catholic church has been abusing people,including sexually abusing children for a long time. Just ask the First Nations.

First, His Grace, the Archbishop is relatively new on the ground, having been installed in late 2012. In the life of a large Archdiocese, like San Fracncisco, that's very little time.

Second, the day-to-day maintenance and upkeep of a Cathedral isn't an Archbishop's direct responsibility; that job falls to the Rector. The Rector is in fact responsible for keeping the Cathedral grounds in good repair.

From the article, "St. Mary’s former rector decided to place the sprinklers in the alcoves two years ago after the doorways and a path that adjoins a neighboring school became littered with crack pipes, hypodermic needles, condoms and human waste, Kamer said."

Third, certain parties recently decided to hire a professional public relations person for the sole purpose of assissinating the character of His Grace, Archbishop Cordlieone. http://www.sfweekly.com/sanfrancisco/sam-singer-catholics-church-catholic-school-holy-war-salvatore-cordileone/Content?oid=3434498

The Cathedral has a problem with litter and other unpleasantries. The Cathedral installs a sprinkler system to deal with it, and discourage loitering in Cathedral alcoves. Archbishop Cordelone makes is a point to repeatedly uphold the orthodox teaching of the Catholic Church. People get butthurt and hire Sam Singer. Montreal Simon gets hoodwinked by the very first piece of bad news to come out of the Archdiocese of San Francisco. Well, it wouldn't be the first time.

Check see what else Catholics recently did in the Archdiocess of San Francisco: http://wdtprs.com/blog/2015/01/san-francisco-parish-takes-step-in-right-direction-sky-falls-on-pastors-head/