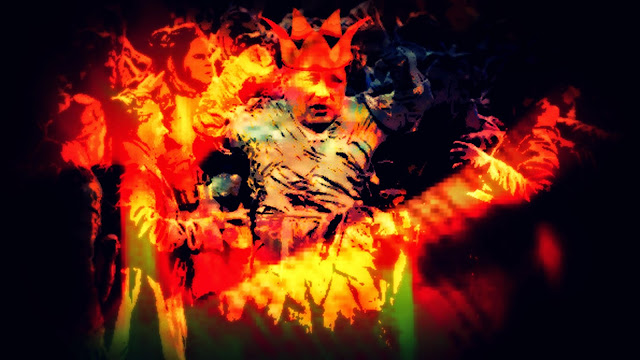 He is sounding more deranged every day. You can see the desperation in his cold dead eyes.

He's flailing away in every direction, trying anything he can think of to try to make himself more popular.

One moment he's Great Warrior Leader, a legend in his own mind.

The next moment he's a Republican Tea Bagger denouncing the "liberal elites."

Prime Minister Stephen Harper attacked a new group of liberals on Wednesday, denouncing elites he predicts will try to sell voters questionable political goods in the federal election next year.

“You can listen to the liberal elites, and the liberal media pundits and liberal interest groups and you can hear the plan: Tell Canadians there’s something new and exciting,” Mr. Harper said, speaking to an audience of several hundred.

And the New York Times.

In an unusual reference, Mr. Harper also suggested The New York Times was no friend to the federal Conservatives, who are seeking re-election next year and maintaining a run in government that began in 2006.

As if he was running for re-election in America not Canada... 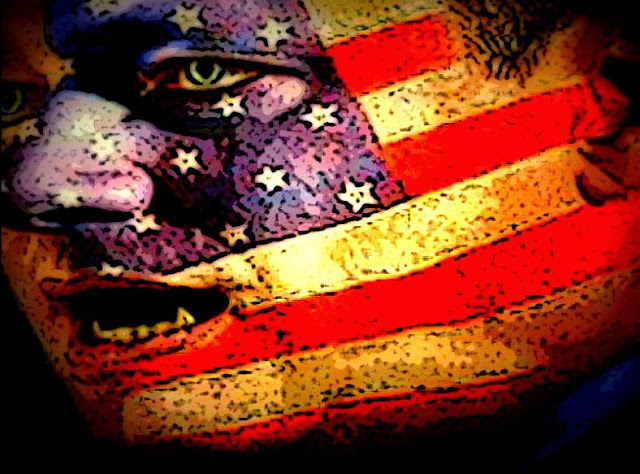 As if he was Rush Limbaugh, or Ezra Levant... 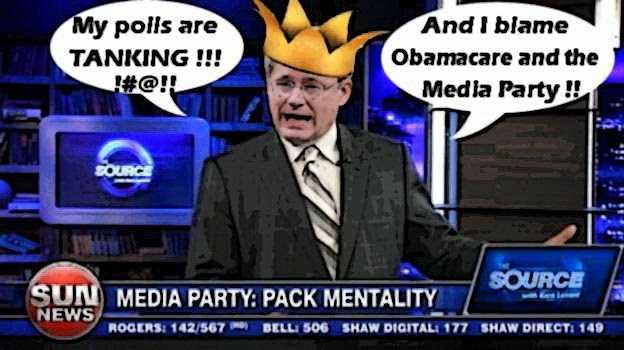 He's raving like a maniac. He's losing touch with reality.

He's talking about "painting BC blue" even though as that big EKOS poll showed it's rapidly turning red and orange... 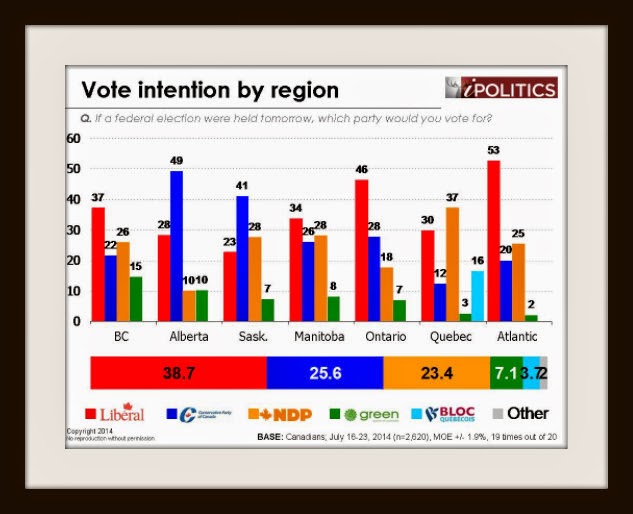 He's trailing the Liberals and the NDP in every place but Alberta and Saskatchewan.

His pool or swamp of accessible voters is getting smaller and smaller.

And Justin Trudeau is beating the shit out of him all over the country... 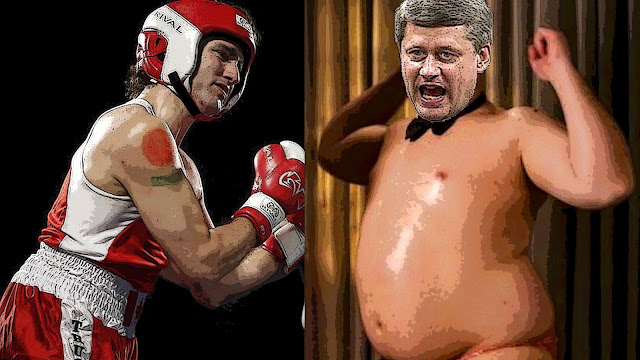 Trudeau is opening up a lead on the preferred Prime Minister front with 31.8 percent of Canadians identifying the Liberal leader as their preferred choice, followed by Harper at 25.5 percent, Mulcair at 18.7 and May at 6.3 percent respectively.

But then of course that's why he is so desperate.

And why his bizarre behaviour is really a pathetic plea for help: 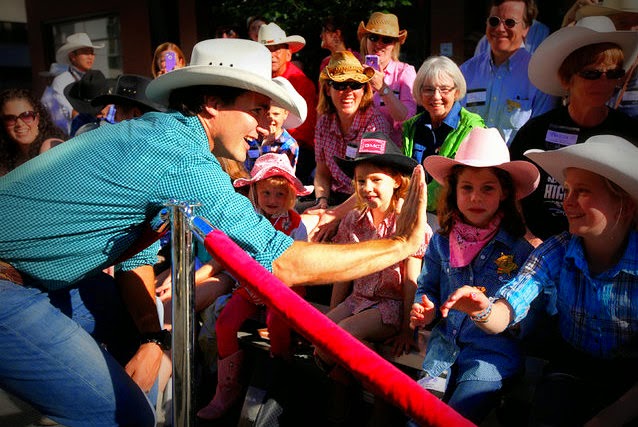 And what he'll never understand, because the young fanatics who surround him won't tell him the truth, even if they could recognize it themselves, is that the reason Trudeau is so popular is because he symbolizes CHANGE.

Which is something polls tell us that Canadians really want. Because most of them are so sick and tired of Great Ugly Leader's old, tired and corrupt government his very sight disgusts them.

The irony is that if he hadn't behaved so badly for so long, the desire for change wouldn't be so great and Trudeau wouldn't look so good to so many. By just being himself; a nice guy, a friendly guy, the anti-Harper.

And nothing Great Ugly can say or do will change that.

Or put lipstick on his pig or his mummy... 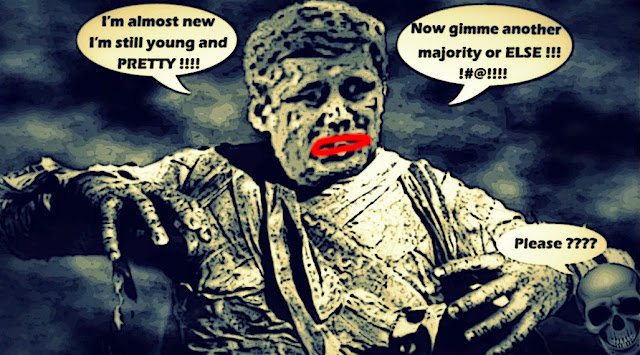 His government is rotting like a fish from the head down, he's falling to pieces, he's slowly going crazy.

Today he's a Republican tea bagger, or Ezra Levant, tomorrow he'll be howling at the moon.

The bully who loves power can't bear the thought of losing it.

But his degradation is almost complete.

And his ghastly time is almost over...

Today Harper raised the spectra of a ISIS attack on Canada. This is how I image it.

He keeps going to the right, thinking that his core support will get him elected which is nuts.. I mean, I have no idea really. But, just from observation, he seems to be trying to pass as much as he can before he leaves. If he wants to shine left, he's leaving himself little time to do it. His strategy maybe is to hope Trudeau trips up on something, it's thin. He's full speed ahead. Doesn't make any sense. .

Harper is Americanizing Canada and has been, for quite some time. We have American police operating in Canada, exempt from our laws. Two Americans Wenzel and Parker, directly participated in two Conservative campaigns in Ontario. Front Porch Strategies, are accused of the robo-calls that came out of the US. Harper's boy Cote said he didn't have jurisdiction, to chase down the robo-calls from the US. Obamacare is similar to our health care, after Harper slashes it. Now again, they are talking regarding, bringing Canada's cost of living, similar to the US.

As for BC, the BC Liberals work for Harper and have done so for years. Ex BC Liberal Premier Gordon Campbell is Harper's favorite henchman. Harper rewarded Campbell the post as, High Commissioner to the UK. Campbell now has, Nigel Wright for company.

hi Steve....Harper would get all excited about ISIS because some Christian communities have been brutalized by those beastly fanatics, and making a noise soothes his religious base. And it does give him an opportunity to deflect attention away from Gaza, and the plight of the wounded children who he refuses to allow Canadian hospitals to treat. Between ISIS and Ferguson it's almost impossible to get people's attention. And at this present time that's the international story that bothers me the most...

hi greg....poll show that the Con base has been eroding or getting soft around the edges so they are desperate to shore it up. They also want to keep the dollars flowing, especially since the subsidies to parties expire, and the Cons are the biggest losers being the biggest party in the Commons. But as you point out he can't get elected with their support alone, so he does need to broaden his appeal. Can he do both at the same time? I doubt it...

hi anon...the Reagan years and the Thatcher ones are still the model for some of those young fanatics believe it or not. As they are for many of their leaders. I don't really care what they call themselves, as long as we defeat them...

Well, there is the Americanization. Imagine speaking of "liberals" when there are genuine socialists, "eco-nuts" and "people who want to break up the country" in Parliament!

Pretty lame site...I'll leave it at that.