The Gaza Summer and the Cruelty of Stephen Harper 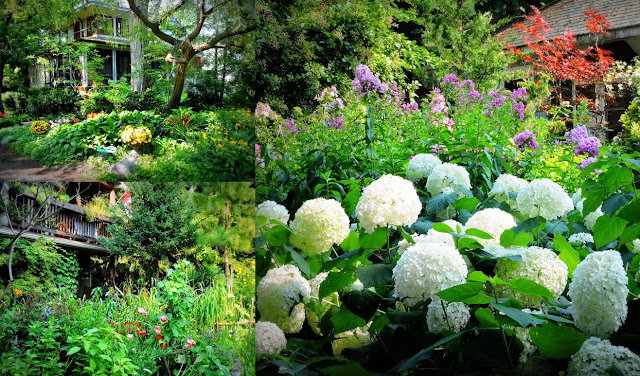 On a warm Sunday afternoon, in the leafy lanes of Ward's Island, with the last flowers of the summer in full bloom, it should have been possible to forget about the horror of Gaza.

At least for a few hours. Especially now that another shaky truce has been announced.

But in this Gaza summer, how can I forget nightmare images like this one? 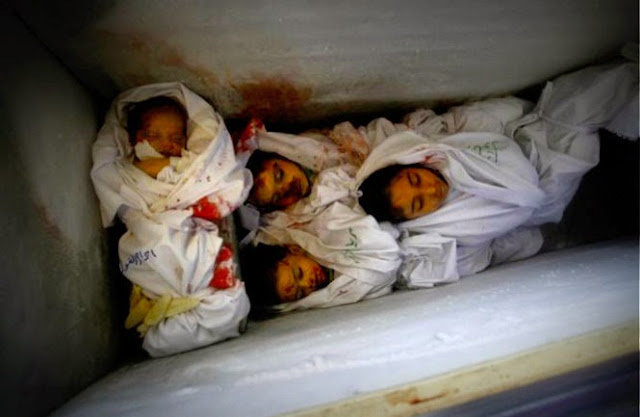 So many wounded and traumatized. 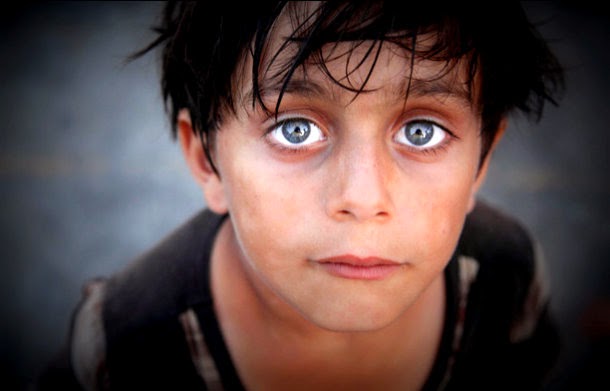 At least 2,744 children have also been reported injured. Some of the young victims, who suffered debilitating injuries for which no treatment is available in Gaza, need to be referred for treatment outside the coastal enclave.

Around 400,000 children are showing symptoms of distress, including bed wetting, clinging to parents and nightmares, and need psychosocial support. Half of Gaza's 1.8 million people are children under the age of 18.

And what I absolutely can't forget or forgive is the cruelty of Stephen Harper, who is still refusing to allow wounded Palestinian children to be brought here for treatment.

Ottawa is refusing to bring injured children from Gaza to Canada for treatment, despite pleas from hospitals, health-care workers and the Ontario government.

It’s too risky to transport injured children and keep them away from family, Foreign Affairs spokesperson Adam Hodge via email. He said Ottawa’s “exploring” other kinds of aid but wouldn’t say what that would entail or when it would materialize.

Other countries are making plans to treat them in their hospitals. The British government is sending a medical team.

But the Cons are doing absolutely NOTHING to help those wounded children... 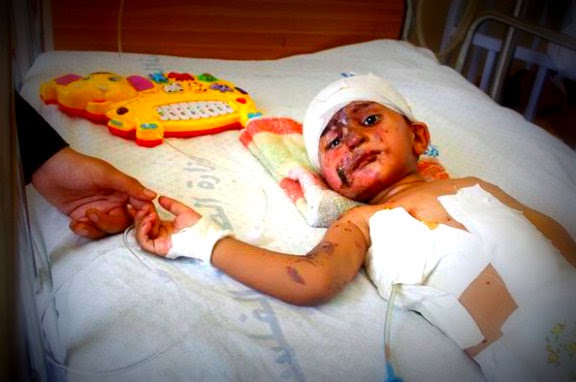 Because they know that to do so would remind Canadians that Stephen Harper all but endorsed the slaughter of those innocents, by cheering on the Netanyahu settler regime's far too brutal assault on Gaza. And never ONCE calling for restraint.

Because for Harper crass politics comes before people, even if they're small and wounded and terrorized.

But then what do we expect when he is the leader of a foul regime, where Jason Kenney would plant this quote from the Con stooge Rex Murphy at the top of his Twitter site:


Rex Murphy-"When Israel is in conflict, all other wars are relegated to the sideshow tents" by protesters on the left http://t.co/PBlG9P0nYX
— Jason Kenney (@kenneyjason) August 9, 2014


To suggest that we shouldn't care so much about the slaughter of the children of Gaza, save it for other children, and dilute our outrage.

While at the same time replacing his face on his website with this ghastly symbol... 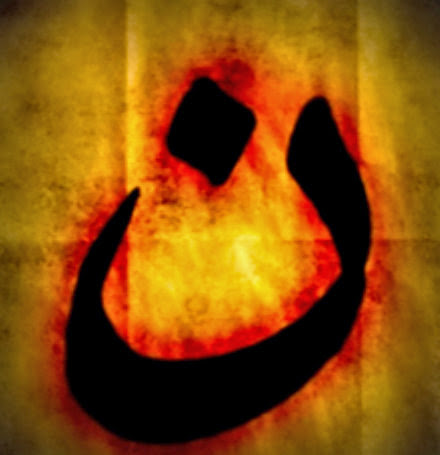 The one the bloodthirsty fanatics from ISIS daub on the homes of Iraqi Christians.

Because for threatened Christians, Kenney and the other Cons have all the time and the sympathy in the world. But for wounded Palestine children they have none whatsoever.

It's beyond belief. A betrayal of every Canadian value I believe in. An absolute atrocity.

But of course we will use all of the above against them, to make Canadians dislike them even more than they already do.

Make their Great Leader look even more like a disgusting bully.

And the next time he tries to pose as a champion of children... 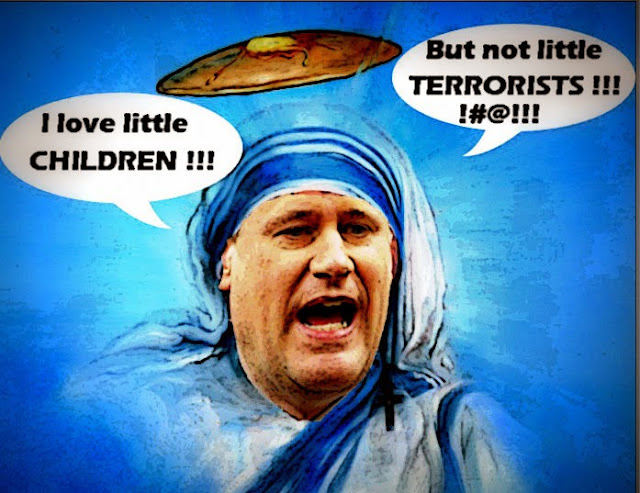 We'll boo him loudly. Or laugh in his face.

The least we can do for those broken children is try to heal their wounds.

The least we can do for our country is defeat that monstrous leader.

Canada is a beautiful place... 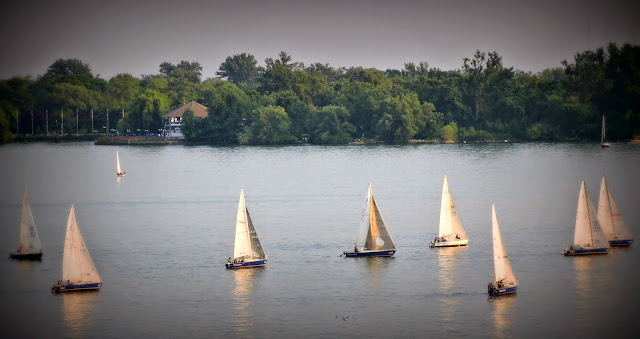 But what kind of beautiful country would let these children die? 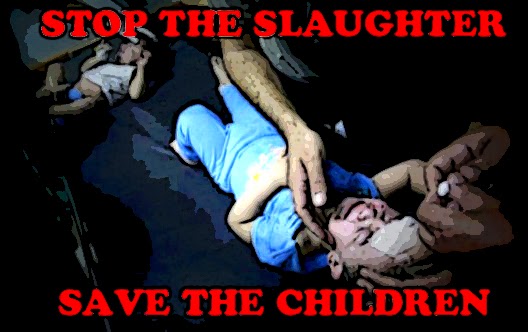 I feel like screaming when I see those child casualties knowing that men instigated the conflict between Hamas and Israelis. There has to be some kind of justice for the children.

hi anon...you know it's funny I am not a great fan of children. I am generally speaking a quiet dreamy introvert, who has been known when surrounded by my brother or sister's sweet but noisy brood to mutter under my breath like some grumpy old man, that children should be seen and not heard. And I'm positively terrified of babies. ;)
But I cannot stand to see the innocent slaughtered so savagely, it offends every bone in my body. And until it is stopped, I will make us much noise as those children...

Canada has once again shamed its citizens by this refusal, much as Canada did during WW2 when they refused to take Jewish refugees, much the same as the 'Komagata Maru' incident off the BC coast, and so it goes...
Those who never learn from history are condemned to repeat it...

The Hamas terrorists know that the Israelis will retaliate with lethal force against any rocket launch site, so they keep Gazans in the area to ensure there is a civilian dead body count for global PR purposes. The Israelis have showered Gaza with leaflets advising civilians they should immediately evacuate locations where Hamas rockets have been launched, but Hamas will not allow that to happen.... and that's a brutal fact.

Both the Israelis and Hamas are complicit in the deaths of women and children and that's the reality!

He didn't just ignore the violence, he incited it.

Sign this petition and call to request criminal charges.

What is your opinion of the many muslim terrorists in our very midst in Canada? They wanted to establish their muslim "ummah" (world) in Ontario with Sharia Law... but Premier McGuinty rejected that!

Islam advocates conversion of the infidels to Islam or the sword... and that's what is happening in Iraq's IS region. Don't you fear the muslim hordes controlling Canada and executing gays? I do.

I hope you realize that the names on that petition will be in the RCMP and CSIS files as extremists dangerous to Stephen Harper and his family!

Yeah and the israeli neo-nazis have openly called for the TOTAL DESTRUCTION of Gaza and ALL of its occupants. That's called genocide you murdering jewish son-of-a-bitch!

How about yelling about the ISIS beheading of Christian children in Iraq... like here:

Anonymous said...
This comment has been removed by a blog administrator.
5:49 PM

The comment by anon at 5:49 was deleted for claiming that ISIS are my heroes and including a link to a beheading.
Please don't include material like that in a comment again. My position is clear if you read my blog. I am opposed to violent extremists of any stripe and all I wish is a just peace between Palestinians and Israelis. And I would raise my voice in protest against the brutalization of any person be they Jewish, Muslim, Christian or whatever. This post was about trying to obtain medical treatment for wounded Palestinian children which should be a human issue above any kind of politics. Please stick to the topic in future or be deleted. I encourage passionate debate, and I realize that emotions are running high on both sides. But I will tolerate no hate mongering on this blog. Thank you.

In case harper and his herd haven't figured it out yet, many of these children are orphans, so there are no parents to bring along. Canada will be safe from these "terrorists" unless he thinks orphan toddlers might start some sort of armed insurrection here.

After Cherynobl, Canada, brought many children here each summer for 2 to 3 months, so they could enjoy clean air, water, and decent food. They then returned home until the next yr. Having children come here, regardless of religion, is the right thing to do. As I wrote, many of these children are orphans. There are no parents to bring.

In the Syrian conflict, several severely injured adults (civilians) were brought to the Israeli border, where they were accepted by Israeli soliders and taken to Israeli hospitals for treatment. One pregnant woman with severe complications was taken to an Israeli hospital to give birth and treatment. There is no reason children from Gaza can not be brought to Canada for treatment. Now if harper and his herd said they couldn't even treat Canadian citizens in an adequate manner, let alone people of other countries, ..............but I'm sure if that were the case, we could still find room in hospitals around the country to treat some of the children.

harper and his herd are just such unethical, immoral bastards, who have the nerve to call themselves Christians. Perhaps he might find he has more incommon with ISIS than he even thinks he has. You would think he would approve at least a "token" number of children, if only to keep the Muslim vote.

hi e.af...yes you're right, they have the nerve to call themselves Christians. And yes they are unethical immoral bastards. And the worse thing is they're not just contributing to the death of children, they're shaming all of us as well as themselves...