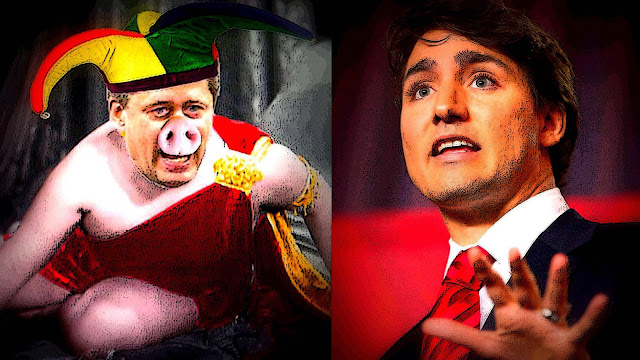 There is apparently no sordid depth to which Stephen Harper will not stoop or plunge, no sewer he will not crawl through, in his depraved and desperate attempt to smear and destroy Justin Trudeau.

He's called him a girly man, a junkie and a terrorist.

And now he's trying to use doctors to attack Trudeau's position on marijuana.

As the Conservatives repeatedly attack Liberal leader Justin Trudeau over his support for the legalization of marijuana, the federal government has asked three groups representing Canadian doctors to endorse a taxpayer-funded advertising campaign warning about the drug’s health risks for young people.

The organizations would not be required to fund the ad campaign, estimated to cost $5 million, but their logos and endorsements would appear in them, according to a source familiar with the proposal.

Because the Cons can call it a public service announcement, but everybody knows it's just intended to reinforce their ghastly attack ads... 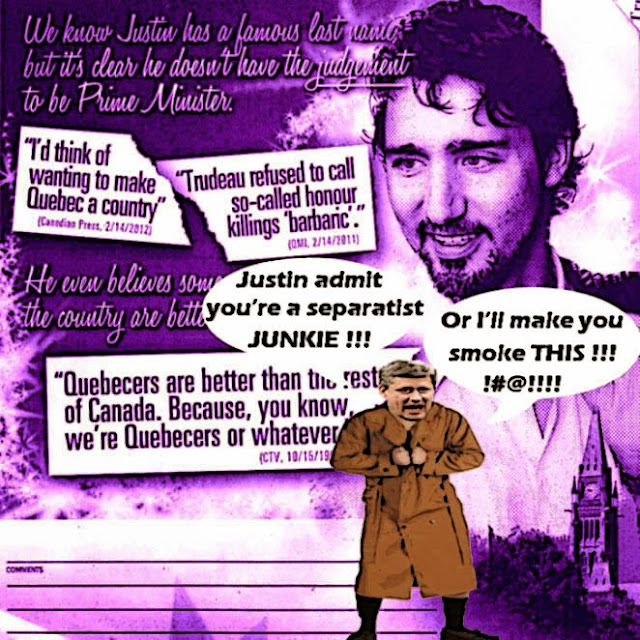 The campaign comes as the Conservative Party runs its own attack ads alleging Trudeau’s approach to legalization would make it easier for children to obtain pot. On Tuesday, the party premiered an online video highlighting Trudeau statements on legalization, with the closing line “Help keep marijuana away from our kids.”

But it does place the doctors in a difficult position. They may realize they are being used, but they can hardly refuse to endorse a campaign that warns about the drug's health risks for young people.

"You wouldn’t find a family physician advocating marijuana use for teenagers any more than you’d find a family doctor telling a patient to smoke a pack of cigarettes a day or drink a bottle of vodka.”

But what they should do, if they are to true to their profession, and don't want to be seen as mere pawns of the Con regime, is ask the Harperites to explain their PRIORITIES.

Ask why they would get doctors to endorse an anti-marijuana campaign? When alcohol is a far more dangerous drug for young people. Especially binge drinking.

Young people who binge drink are especially at risk. This is because they are less familiar with the effects of alcohol, and are more likely to do something impulsive or dangerous. Binge drinking is also more common among young people.

For which, as we know, Peter MacKay is the legendary poster boy... 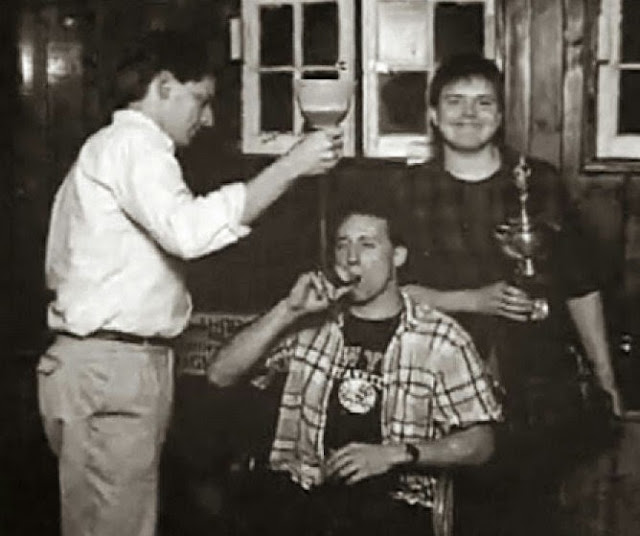 And when it comes to booze, Lord Harp is not exactly a role model either... 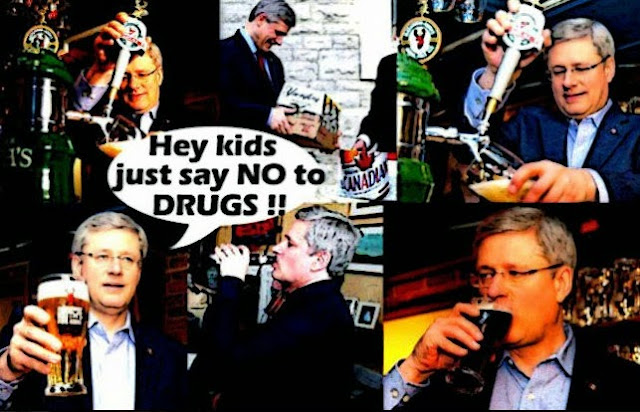 Especially not after that scandalous "swimsuit" party in his own home.

An 18-year-old girl was rushed to hospital in the wee hours of Sunday morning with suspected alcohol poisoning after a party at 24 Sussex Drive, the official residence of the prime minister and his family. 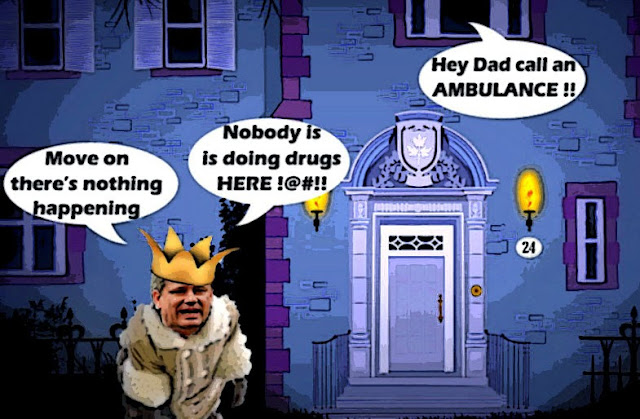 For which I'm still waiting to hear his explanation, or have the police explain why no charges were laid.

Which reminds me of another question the doctors should ask Stephen Harper:

Does he really believe that throwing even more young people in jail for the "crime" of smoking marijuana is good for their health??? 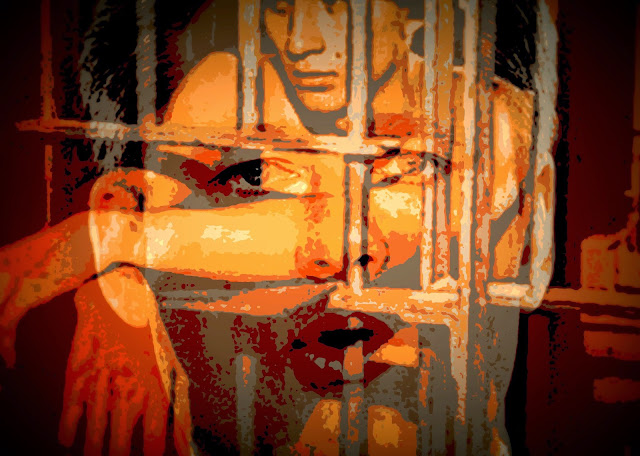 When they could be exposed to violence, raped by older inmates, contract serious diseases like AIDS or hepatitis, be plunged into depression, be driven to take their own lives, or traumatized for life.

Because those are also health questions that must be asked. And if the Cons can't answer them, the doctors should use that as an excuse to recuse themselves from what is obviously a political campaign.

But of course the Cons won't listen to reason, and they'll try to degrade doctors like they are always trying to degrade judges, in their increasingly desperate attempts to smear Justin Trudeau with disgusting and misleading ads like this one...

And the good news? None of this will work. Many Canadians are cool with the idea of decriminalizing or legalizing marijuana.

Most know the Great War on Drugs has been an epic failure. And most don't believe marijuana is a Killer Weed.

So that sleazy campaign will only make Harper look even more like a maniac or an American.

For surely his views on that drug were formed in another era...

The same era, and the same country, where him and his reefer madness belong.

Gawd. You know if I had any weed I'd roll myself a big fat joint tonight eh?

Write the date on it so I can remember the exact time the Cons tried to degrade doctors.

Put it on ice next to the bottle of victory champagne lemonade.

And save it for the glorious day when those scummy maniacs are defeated... 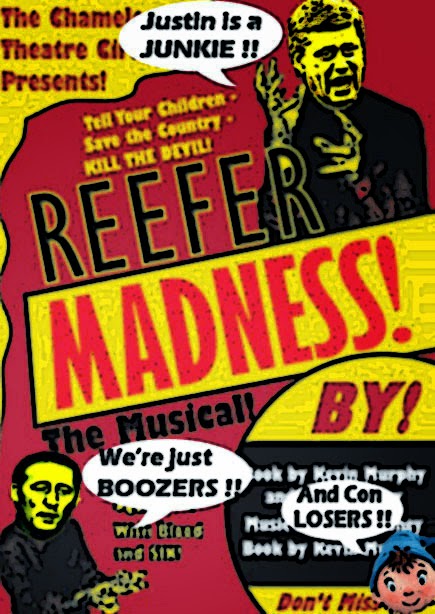 There is one interesting data point in this though. This shows that the Harper Government (tm) recognize that their voice alone is not working on this issue/attack approach, so they are looking to find voices with more credibility than theirs on this issue to try and boost their credibility so as to make their attacks work. I think that is something we have not seem them feel the need to do against a Lib leader before now, and it shows at least a beginning awareness of just how bad things are looking for them AND how weak their own credibility is on what they should be able to argue is a law and order issue, supposedly one of their strongest areas.

The fact that this has already hit the media, that they are even trying this, also shows some weakness. While of course par for the course in terms of contemptible behaviour by the Harper Government (tm) to try and use tax dollars and independent authorities for a partisan electoral ad strategy the fact that it has already become public knowledge will weaken if not entirely destroy the impact such a campaign would have if they manage to get the Doctors onside. Indeed, if they go ahead with this despite this being out there it could well be used against the Harper Government as proof of why they must be turfed forcefully from office, why they cannot be trusted, why anything they claim of their political foes should always be discounted because of how far they will go to make shit up to smear them with. THAT is what this shows.

hi anon...it should have been case closed so long ago. We were so far ahead of most others in the world. And then somehow we blew it. Now instead of being first we're heading for last place....

hi Scotian....there is no doubt that the Cons are trying to make their sleazy and misleading ad look more respectable, by getting the medical organizations to endorse a PSA that has the same tag line. But all I can feel is outrage. What I do know is that Trudeau must reinforce the message that he's actually trying to control marijuana and keep it out of the hands of kids, because the Cons are trying to make it sound like he's doing the opposite. I would suggest turning their arguments against them. By asking why they don't want to control the drug better, why they want it to easily get into the hands of kids, and why do they want to make the big drug dealers richer?
*Sigh* Let nobody say that I don't help all progressive parties. Even the Liberals... ;)

Isn't it just too sleazy for words to do what harper and his herd have suggested to the doctors? Like doesn't that border somewhere around illegal. Now with the Post Office wanting doctor's notes so citizens can get mail delivery at home, doctors aren't going to be all that happy with the P>M. and his henchman. harper and his herd may have just lost a lot of doctors' votes based on his sleazy suggestion and the extra work load he wants to dump on them.

Canadians are tired of the weed discussion. Not many object to it, as long as it is sold in an orderly manner, such as in Colorado and Washington State. Trudeau is clear, if it is regulated, it will actually be easier to keep out of the hands of kids. Right now it is easier for kids to get weed than it is to get booze. So if its about protecting kids, you'd want weed regulated. Then the cops can deal with the "manufactured" drugs and the ugly drug labs in townhouses putting all sorts of people at risk.

e.a.f., you are right. There has been a spate of deaths among "users" here in Montréal of late, and no doubt elsewhere. Nowadays users don't choose between traditional hard drugs, a bit of hasch, booze, misused prescription medications and new manufactured drugs - they take all of those, whether we are talking Amy Winehouse or a certain Mayor. Marijuana is such a minor player.