So What Do Canadians REALLY Think of Stephen Harper? 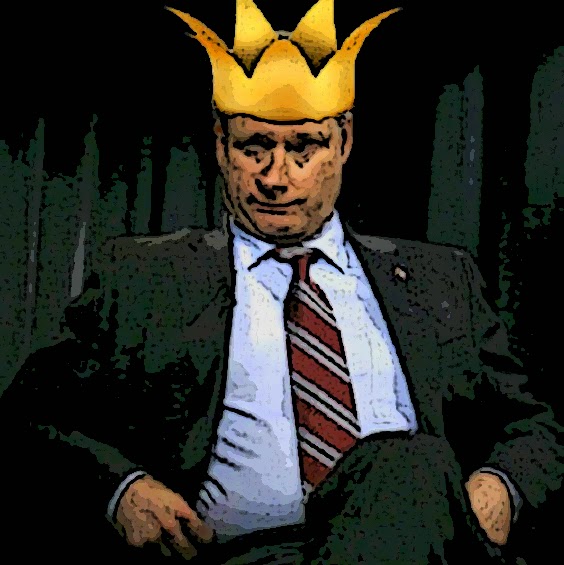 Well, we know he has a high opinion of himself. That he likes to rule like a king.

We know that he ordered that the Canadian government should henceforth be known as the Harper government.

And that these days he's posing as a Great World Leader.


Chatting it up with Obama.

Sending sleeping bags to the Ukrainians, and weapons to the Kurds.

But sadly for Lord Harpo, when Canadians are asked what they think of him the results are considerably less flattering. 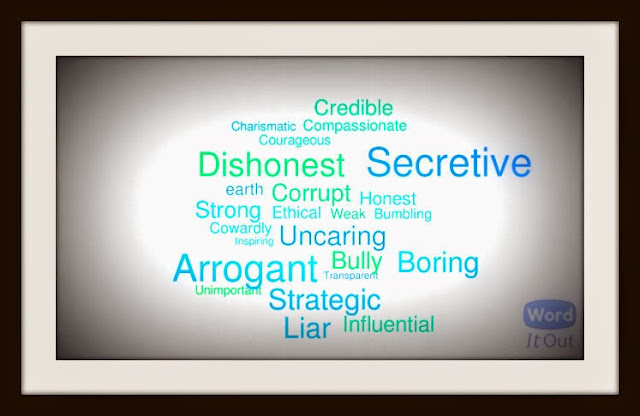 Gawd. And I thought I was hard on Harpie. Compared to what others think about him I might as well be his boyfriend. *Gasp*

Who knew I was treating him so tenderly?

And who knew Putin and Great Warrior Leader had so much in common? 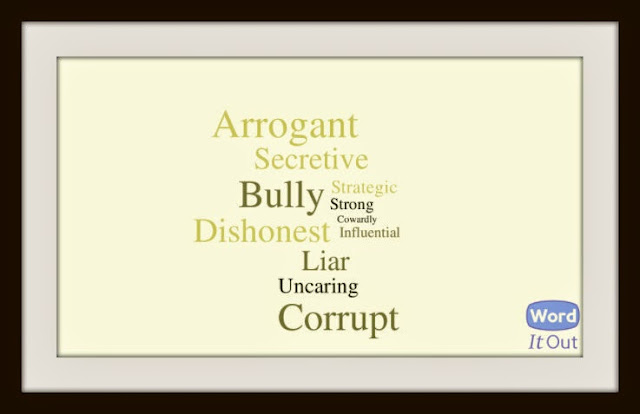 They're practically MADE for each other.

You know, polls are so binary. All they give you are the numbers, which in Harper's case are disastrous.

And sometimes little word games like those can help you get an even better idea of how people feel about their leaders.

And what that word game tells me is that Stephen Harper has been in power too long.

His negatives are clotting like red blood cells before a fatal heart attack.

He will not be able to overcome them. Time is his enemy.

And his days in power are numbered... Golly. Isn't it great to know that COWARDLY and BUMBLING are twice as big as INSPIRING?

So much for Great Leader.

No-one listens to this, Harper is buying up ethnic votes. We all know, the Campbell/Clark BC Liberals work for Harper. There is a deal signed with Communist China, to build the LNG plant at Prince Rupert. Thousands of Chinese will be brought over for Harper and Clark's, Northern BC mining plan. Poland was given, the, BC ship building contract. Electrical and Electronic Engineers of India. Canada is calling, under the *FEDERAL*scheme. They are recruiting many, many East Indians for Canadian jobs. Then there are, the Jewish votes, The votes from, the Canadian Ukrainians. Harper still has a lot of time, to give more of Canada away away for his ethnic votes.. Good gawd!! Add up the number of Chinese in Canada. 413,00 Chinese in Vancouver only. 45,000 more want in. Add up, the number of East Indians in Canada, Add up the Jews, Ukrainian, and Polish in Canada? Both Premier Clark and Jason Kenny did a major suck-up, to the Chinese.

However as always. Canadians will sleep right through, Clark and Harper's treachery. BC citizens even warned, Harper is a snake in the grass long, long ago, during Campbell's reign of terror in BC. Ditzy Chrisy also works for Harper, as the evil Campbell did before her. Harper will win the next election while, Canadians sleep right through, Harper's dirty tactics.

He is the worst PM ever by a long margin and like Mike Harris in Ontario he will send the cons to the wastland as long as the collective memory exits. He make BM the PM look like a stand up guy, Even the big chin would not have voted republican.

People are simply tired of the scandals, the lack of care for Veterans, the selling of Canada to foreign interests, the lack of progress for themselves and their families. Our standard of living has declined in the past 10 yrs. and things do not appear to be improving. Harper and his herd inked free trade deals all over the place, but Canada has not achieved any benefits. Now we won't even be able to sell wine in B.C. they way we want to if he signs the F.T. deal with the E.U. Why he would ever want to do that is beyond me. You gotta wonder what he is getting out of it.

The E.U. is not in great shape. They are simply looking for cheap labour and resources, once they get into it with Russia.

Harper sends people to jail, but won't sign a national health accord. The RCMP are a mess. the military is a joke, except for the soliders themselves. The list goes on and the creep needs to go. His and Putin's personality traits are too similar for comfort. Perhaps harper and his herd would like to move to Russia or China, who they want so desperately want to sign a trade deal with. Yes, let harper and his herd move to China. We don't want his type in our political system. we are a democracy after all.

Hi Simon, I guess you're just too damn nice....Who knew?

hi anon...Harper is indeed trying to buy the ethnic vote, but please remember that not all those Canadians can be bought. Whether they are Ukrainian Canadians, or Jewish Canadians, or Chinese Canadians they don't swim like a school of fish, they have independent minds, and many of them are on our side. Anddon't despair, if we get out the vote we will win the next election...

hi Steve....I have always considered Brian Mulroney a much better person than Stephen Harper. The Bloater had his many flaws, but he is more human. I could see myself at the bar in the Ritz Carlton where he used to hang out, laughing at his blarney. I could never do that with Stephen Harper, for him and his creepy Cons give me the chills...

hi e.a.f...you know I haven't been able to summon up the energy to read about the CETA sellout. This country and the world are just too crazy these days. All I know is that while I can't do anything about the horrifying events in Iraq, Gaza, and Ukraine, but I can do something about getting rid of Harper and his Cons, and I will work my ass off to try to make that happen. I won't settle for that Con crap, I demand something better...

hi Kev...Oh sure,make fun of me when I'm down and traumatized. I just don't know how I could have been so nice to him. I must be losing my mind, like just about everybody else in Harperland...and the world.
But don't worry, I'll start my day tomorrow by getting up before noon, and drinking coffee WITHOUT sugar, and it will be no more Mr Nice Guy.... ;)