Scotland, Gaza, and the Shameful Silence of So Many Canadians 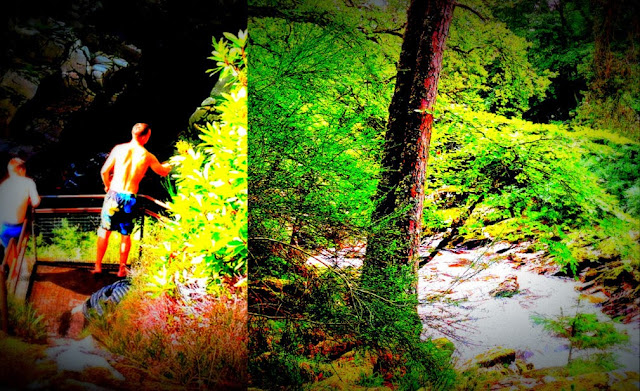 I spent my last day in Scotland in this beautiful highland forest with Sébastien and a group of friends, taking turns leaping into the icy waters of a deep gorge.

Celebrating life, trying to forget for a moment the nightmarish state of this world.

And for a while it worked.

But tonight I found myself writing about Gaza. Again.

For how could I ignore that horror when so many in Canada have been so silent?

And not just the foul Con regime, but also the Liberals, the NDP, the media, and so many others who should know better.

All trying to pretend that what is happening there is just another war, a contest of equals, instead of a crime against humanity. 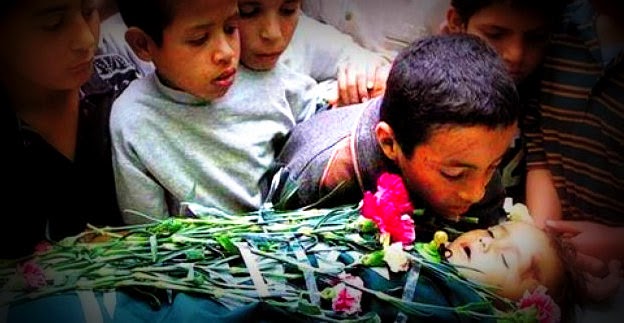 All trying to pretend that one can be objective, when as Giles Fraser writes, being calmly rational about Gaza feels like another form of madness.

I know that traditional journalism prides itself on maintaining a strict firewall between objective and subjective, between news and comment.

But isn’t this just a convenient fiction? I want the paper to write, in big bold capital letters: we hate this fucking stupid pointless war.

For how can one be objective about the slaughter of so many children?

All this being cool about it didn’t work for me. I think of the remains of that two-year-old boy that our Jerusalem correspondent Peter Beaumont was presented with in a plastic bag. And the kids packed into that UN school, sleeping on mattresses, expecting that a blue flag would keep them safe. My focal point wouldn’t extend past that horror. I see it up close and personal. 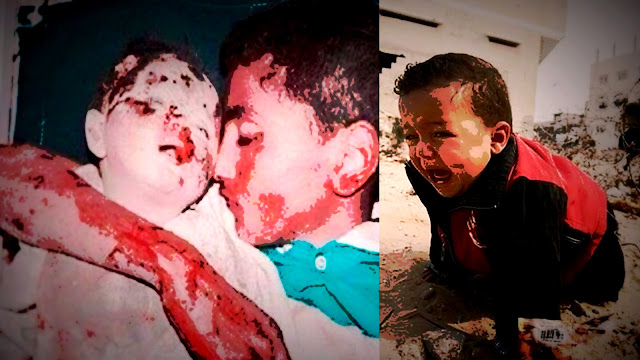 And how could so many people in a country like Canada allow themselves to be so blind or so cowardly?

Why couldn't a single Canadian media outlet write an editorial like this one?

Wars kill people, including teachers in their classrooms, nurses in their hospitals, and farmers in their fields. But when children die in the hail of steel soldiers direct at one another there is a special kind of obscenity.

They know nothing of propaganda, they did not cheer in angry rallies, they did not send off their menfolk to fight with a blessing, they did not sit at meetings where the pros and cons of making war were gravely discussed by middle- aged men. No, they just die. Or lose their little legs, their arms, their eyes.

Why can't those who claim they are friends of Israel understand that the truth is the truth even when it HURTS?

The more fundamental reason why Israel went in is not related to what Hamas or Israel has done, but to what Israel has left undone. The distinguished Israeli writer David Grossman, addressing himself to Israeli leaders, asks: “How could you have wasted the years since the last conflict without initiating dialogue, without even making the slightest gesture toward dialogue with Hamas, without attempting to change our explosive reality?

The outside world must help devise a ceasefire which stops the killing and puts in place arrangements on access, a degree of demilitarisation and the return of the Palestinian Authority. But that will not last long if Israel simply sinks back into the limbo land most of its politicians have come to prefer, a land where peace can be constantly postponed, and Israelis, although occasionally surprised by bouts of nastiness, can go off to the supermarket as if they were in Denmark.

When it alone can save the Palestinians AND the Israelis.

And then there is the question that haunts me the most. How can Canada that was once known for its precious peacekeeping skills have fallen so low?

Why can I be so proud of this small country?.

And so ashamed of the big beautiful country I love so much.

And of course you know who I blame... 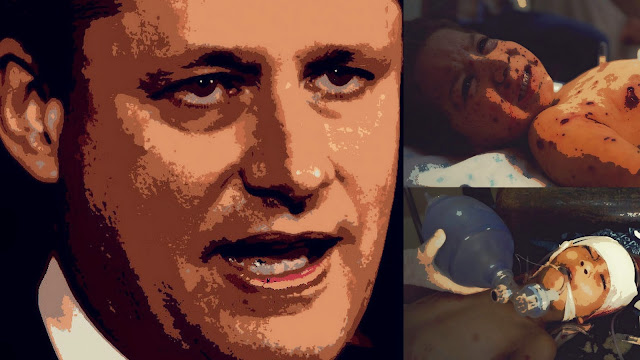 For even from this side of the Atlantic tonight, it seems clear to me that eight years of his brutish rule, have corrupted this country's very soul.

And all I can say is thank goodness for this small act of resistance.

For us, the past 21 days have been deeply disheartening, as we now see that we are also destined to inherit a more violent world. And it isn't only because Stephen Harper has proven himself (yet again) to be incompetent at representing Canada on the world stage but rather, also due to the hesitation from our Official Opposition when it comes to standing up for New Democratic values on this issue.

For it is time to call a spade a spade.

The assault on Gaza is a crime against humanity.

The silence of so many Canadians is shameful.

First we must save the children.

And then we must save ourselves...

You conveniently exclude these facts:

• The Hamas terrorists brought the war to Gaza by launching rockets from populated areas knowing full well that the Israelis would respond with deadly force. Why did they do it?
• Hamas would not allow Gazans to leave the war zones and fully intended to sacrifice the Gazan men, women and children to Israeli attacks on the rocket launch sites. It's just Hamas PR propaganda.
* Hamas continually breaks ceasefire agreements by launching more rockets into Israel... and they have launched over 2800 rockets so far.
• Hamas terrorists are executing Gazans who are protesting the war and in a brutal fashion. Hamas are mad dogs who should be destroyed utterly.
http://beforeitsnews.com/alternative/2014/07/savage-brutality-hamas-executes-protesters-in-gaza-video-warning-graphic-images-3002956.html?utm_source=dlvr.it&utm_medium=feed
• Israelis are fed up with Hamas attacks and will not stop until the rocket attacks stop, the tunnels are destroyed, and Hamas is disarmed... no matter how many Gazans are collateral casualties.

If you are so concerned about Gazans, perhaps you should go to Gaza instead of coming back to Canada to spew your sick propaganda.

I understand your point here Simon, but perhaps you might include what are the Arab countries doing to save the children and civilians of Gaza. I haven't heard of Saudi Arabia, Bahrain, or Qatar wanting to take any of the children or civilians. Those countries certainly have the medical facilities and the money. It might be Hamas doesn't want the children and civilians to leave. Qatar, is a financial supporter of Hamas, they ought to be able to do something to assist with the side affects of their support.

As it now stands Israeli will most likely pound Gaza into the ground, without much opposition from either other Arab countries or the West. The children will suffer and no one will win. It is very sad. That is what war does.

The only ones who are winning in this war are the arms dealers and manufacturers and those, a lot of them are American companies. Qatar just purchased a couple of billion dollars worth of arms from the U.S.A. like what was that all about.

The civilians of Gaza are free or at least a great deal freer than other people in other countries around the world. What is not so great is the bombing. That isn't going to end because both sides have something to gain, if they get their way. Benny wants to stay in office and he needs the ultra right wing extremists in Israel for that. Hamas extremists are never going to let anything stand in their way in their continued efforts to eliminate Israel.

Having Canada speak out against the war isn't going to help. Having Stevie shut up might help a tad, but not much. It will be up to the citizens of Israel to deal with Benny just as it is up to us to deal with Stevie. Dealing with Hamas, well if the Israeli generals were left alone by Benny, they would most likely be able to find the leaders of Hamas and dispatch them to their world of 70 plus virgins, etc. and all might be quieter and the children of both countries could go out to play. In the meantime don't expect any other country, including the Arabs to rescue the children of Gaza.

Simon, I too share your horror at the silence, and wonder if this is what it felt like for Jews during the critical times of WW2 when they were trying, desperately, to find shelter in other countries, and Canada, to its eternal shame, turned their backs on them, as did many countries..or ignored their plight altogether..and this current insanity is invested on all of us by those who seemingly only yesterday were going through the same horror themselves...how quickly forgotten history can be..all those Holocaust museums, those fundraisers here in the West for Israel, will ring hollow from now on...they have literally self-immolated in the name of paranoia and hatred...
'I can hardly stand to see any media regarding this , anymore, it is too devastating...l

Were the Jewish children with tattoos on heir arms, collateral damage too. Never did Canada have a rally to support, the country that did that.

Six members of my family served in WW2. One brother was in the liberation of a concentration camp. The family always had a lot of compassion for the Jewish people. The deaths of the children of Palestine, has changed my opinion of the Jews.

That Israel threw themselves in with Harper, has changed many minds towards the Jewish people as well.

Looks like the Israeli strategy is to preemptively kill Gazan children before they become future Hamas terrorists. Kill them in the cradle before they grow up and are inducted into their Islamic jihad against Israel. It's all in the Bible Old Testament (Torah): "Kill them before they kill us.". Jews ain't stupid.

In the Islamic countries in the Middle East, Gaza is an expendable and can be sacrificed to Israel. The people living in Gaza are nondescript palestinian arabs of no particular value in the Muslim Ummah. All these palestinian arabs could have been relocate easily but they were kept in Gaza to hassle the Israelis. The realpolitiks of the situation is brutal and unfortunate for those trying to survive in Gaza. Now we hear that the Hamas mad dogs are executing Gazans who stand up against the rocket launching and are demonstrating for peace. I hope you all understand the true nature of the Hamas terrorists and their devious intent.

Israeli did not "throw itself in" with Harper. Harper threw himself in with Bennie.

It might be in order for people not to hold the state of Israel to a higher standard than other countries. Politicians are politicians, regardless of their country. Just look at Bennie and Stevie.

So true. Neither did Scotland. BTW, how would Britain react if Scottish separatist would aim missiles to their cities

Most of the Romans in camps were Jews, though

I meant Roma, as in Gypsies. Not Romans as in Rome Italy. And Gypsies are not usually Jewish.