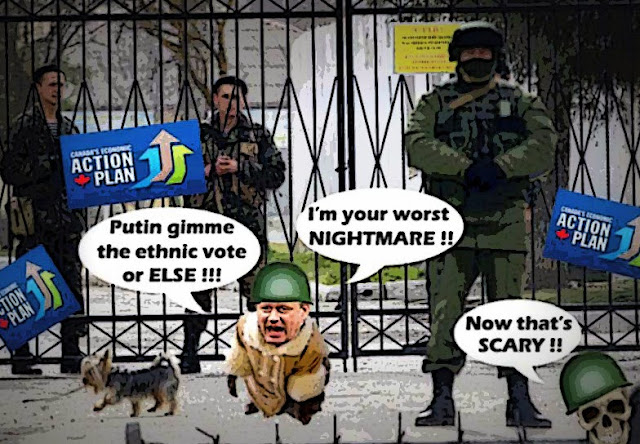 Well as you know Stephen Harper has been posing as a Great Warrior Leader ever since the Ukraine crisis began.

In relentless pursuit of the ethnic vote, he has tried to make it appear like he is leading the charge against the Russian dictator Vladimir Putin.

By blowing enough hot air in his direction the fascist dwarf must have had to put rocks in his pockets to keep from from being blown through the air. 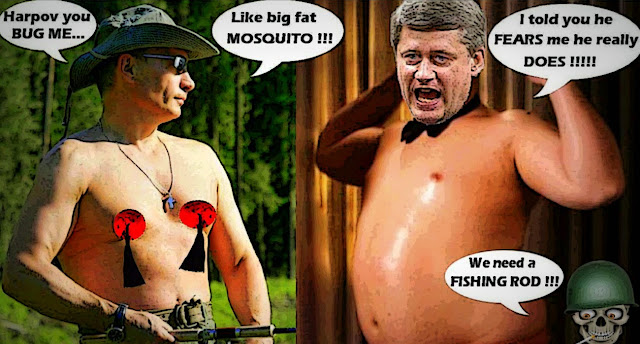 Harper has followed the lead of the U.S. and the E.U. and imposed a number of practically meaningless sanctions, while making it sound like he's running the show, and the man Putin fears the most.

And today he kicked it up a notch, by ordering the Canadian military into action, and commanding them to arm the Ukrainians with...um...first aid kits and sleeping bags.

While also ordering his hapless stooge Nicholson to fire off another blast of hot air, from every orifice, in Putin's general direction.

"(Russian President Vladimir) Putin's failure to end his support to armed rebel groups constitutes a real threat to international peace and security," Nicholson said. "Canada will not stand by in the face of this threat."

But when the Russians fired back, by imposing a ban on imports of Canadian pork and other food products, Great Warrior Leader still had the nerve to declare that Putin is the one who is desperate.

And did further declare that his was a MORAL government that puts principles before trade.... 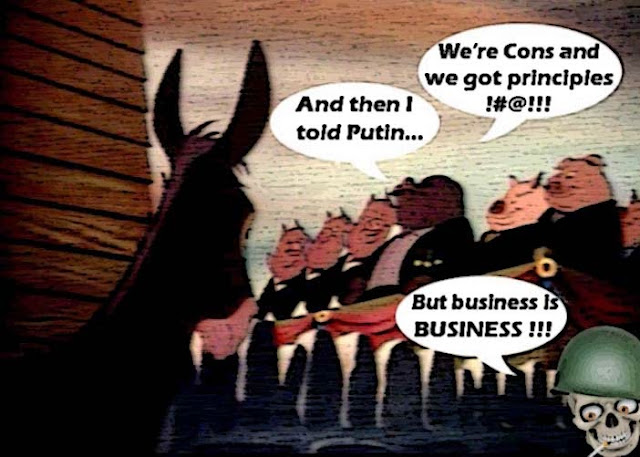 In a statement Thursday, Mr. Harper’s office said impact on Canadian trade was considered when weighing sanctions against Russia, but that Ottawa will “not allow business interests alone to dictate our foreign policy.”

Even though he is shielding some of the richest and most powerful members of Russia's business elite.

Canada’s expanded sanctions against Russia continue to shield three Russian tycoons with reportedly significant business ties with Canada. Stephen Harper has once again left out Sergei Chemezov, Igor Sechin and Vladimir Yakunin who have been sanctioned by other countries including the United States. 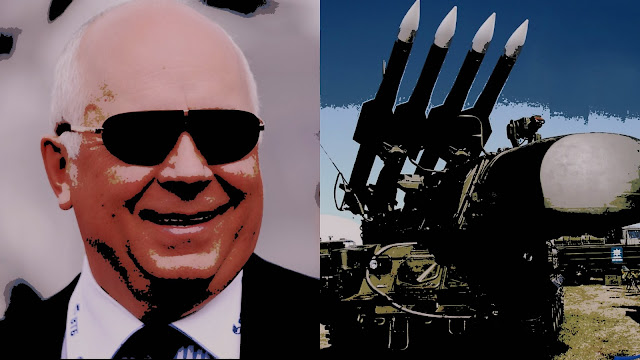 The one whose military corporation Rostec, made the BUK missile that brought down that Malaysian jet liner.

Great eh? So much for Great Warrior Leader. Whose side is he on anyway?

And so much for Canada's influence in the world...

“Conservatives are allowing our foreign policy to be shaped by short-term commercial interests,” said NDP’s deputy foreign affairs critic Hélène Laverdière (Laurier—Ste-Marie). “The inconsistency between their hot rhetoric and their half-measures is making Canada irrelevant.”

Although it must be said, it's probably a good thing that we ARE irrelevant. 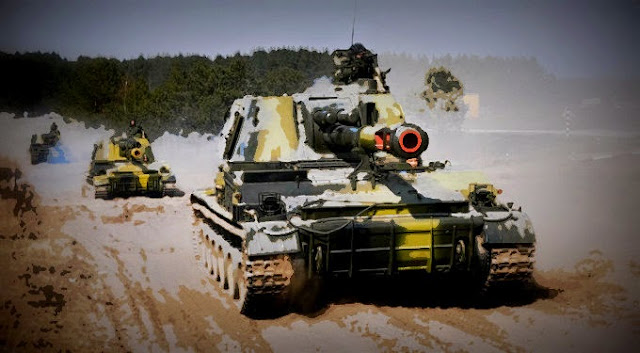 Russia has massed around 20,000 combat-ready troops on Ukraine's border and could use the pretext of a humanitarian mission to invade, NATO said on Wednesday, its starkest warning yet that Moscow could soon mount a ground assault against its neighbour.

Because goodness knows what that maniac could do in relentless pursuit of the ethnic vote?

And take us all down with him... 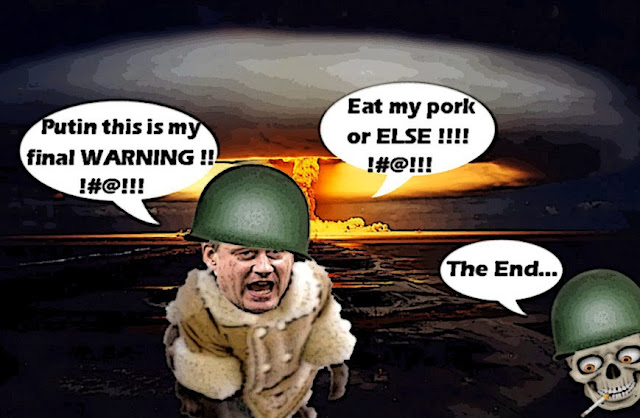 That crazy little Con monkey, who would pose as a Great Warrior Leader.

But one thing is for sure, he is as he likes to say about Justin Trudeau, in way over his head.

The crisis in Ukraine needs him like we need the Third World War.

And the sooner we defeat him the safer we will be...

You might start from the angle that Kiev shot down MH-17 and not Russia/rebels, and work your way to the truth of what the fascist freaks in Kiev are doing to their own people in the east. Maybe then you'll see that Harper is just part of the US alliance, to get NATO on Russia's border. You can't even see what's going on, so if I were you I'd rather not make a bigger fool of myself by trying to trash Harper while not even understanding the truth.

Rather blog about the weather.

FYI... There is reasonably compelling evidence that the coup in the Ukraine was instigated by the US and that the downing of MH17 was a false flag attack by the Ukrainian air force (http://21stcenturywire.com/2014/07/25/mh17-verdict-real-evidence-points-to-us-kiev-cover-up-of-failed-false-flag-attack/) which makes the actions of the Harper Government even more odious.

Harper and his herd are a bunch of idiots when it comes to the Russian Bear. They know not what drives them. He doesn't understand this is a country which has "outwaited" several attacks on their country. Deprivation became a way of life. Does harper really think a lack of pork from Canada is going to bring Russia to its knees?

As to being ready for any war? Yes, sleeping bags are about it. Canada doesn't have a decent military to fight any type of war or do we not remember what it was like for the first Canadian soliders to go to Afghanistan. The government didn't even supply them with adequate uniforms and body armour. Some bought it themselves or picked up it up from Americans. Then when the injured military personnel came home, they were abandoned by harper and his herd.

Canada couldn't defend itself if Putin decided to invade this country, via the north, so until harper and his herd can find a way to do that, he might just as well shut up. Harper is doing nothing to solve the problem He is just an empty headed cheerleader. The E.U. will decide what is going to happen and then they will ask the U.S.A. for assistance. harper is just some inconsequential flea jumping up and down. The sooner he understands that no one takes him seriously, the better for all concerned.

We have enough problems in Canada. Let harper attend to them first.

Everybody take a deep breath. "around 20,000 combat-ready troops" OMG!!!! PANIC!!!!! Um, that's approximately 2-3 army divisions, teeth and tail together.
The Russians used something like 300+ divisions to get to Berlin, plus nine zillion Sturmoviks and artillery tubes.
Now, with NATO airpower, Vlad can't get air superiority, which means "around 20,000 combat-ready troops" are going to get royally smucked if they move on Ukraine. JDAM's are a real bitch, and then there's the Warthogs; Vlad's T-90's are going to savor the 30mm depleted-uranium penetrators.
Vlad has to prove to the oligarchs that he can dick-thump, or he's gone. So far, the agitprop = Ukraine shot down the airliner = just isn't working, as you see by the comments above, from people who drank Vlad's koolaid, so I expect this to ratchet up some more, before Vlad realizes he just can't afford the attitude. Like Dirty Harry said, "A man's got to know his limitations" — Stevie, too.

edsock,
perhaps you haven't seen the newest generation M.I.G.'s and exactly what they are capable of. A fucking warthog wouldn't stand a prayer against one. The warthogs are built to withstand 3-4 direct hits, however woefully slow and outdated they are, but not of the magnitude the new Sukois are capable of delivering. Besides, the technology that the "dirty russkies" have all works, unlike the pathetic f22's and f35's which don't even fly yet. If harpie wants them, you gotta know they're just as big a piece of shit as he and mckay and kenney are.
Nice try, though. Hey, maybe you can get "w" to put his codpiece back on and walk across some aircraft carrier deck again. That'll show 'em, right?

Hi common sense....this isn 't a post about the situation in Ukraine. I have no idea what has been going on there in the last month. I've been too busy following the slaughter in Gaza. But I will say this: I don't trust the Kiev government, the separatists, NATO or the Russians. And this post is about the hypocrisy of the Con regime...

YES!!!! The reporting is twisted propaganda that doesn't tell the truth. The CIA has it's finger in all that's happened. Obama must pull the CIA under control. Now the Russians are preparing to invade Ukraine and Harper is sending a cargo plane with munitions into Ukraine. I pray it isn't shot down too!

Harper is just nailing down the Ukrainian and other Slavic voters in Canada because he knows he's lost the Muslim vote. He's also desperate for the Jewish vote and their money too. So obvious.

people tend to forget the tenacity the Russian people have for perseverance under all sort of unpleasant circumstances. Any bombings aren't really going to stop the Russians, they will simply call up more troops and keep going. The Brits have Air power, but Canada, not so much. They didn't even have enough money to keep the Snowbirds up for a full schedule. The Americans may be too busy in the middle east to care, so the Russians could do some real damage. Now as to the big O's who support Putin, don't forget, when they piss him off, they go to jail, for a long time and he takes away their assets. He has done it once, and the rest have fallen into line, where they will stay unless they think they can run Russia on their own. The big Os need Putin more than he needs them. He can always nationalize their businesses again. Remember the boy was raised by the KGB in the Soviet era.