Is Stephen Harper Finally Running Out of Time? 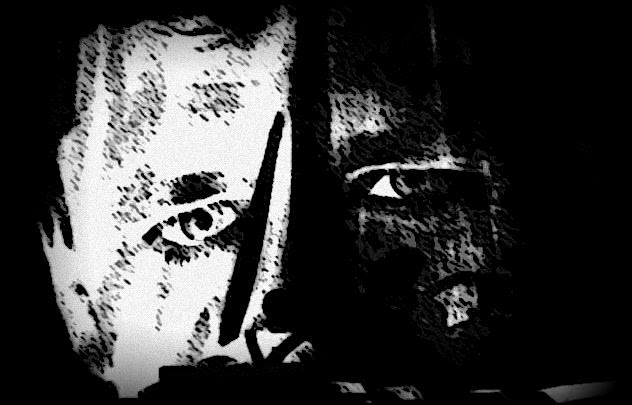 He has been keeping a low profile. Apart from a steady barrage of short statements on the Ukraine crisis he isn't saying much about anything else.

Far from the apparent ascendance of the Conservatives as the new natural governing party, their reign appears to be closing and the recent surprising (not to us we note ) election of majority Liberal governments in Canada’s two largest provinces, may well be a harbinger of the end of the period of conservative political dominance in Canada.

But as Chantal Hébert points out he will not long be able to ignore its implications, for it suggests that the Con regime has a real leadership problem.

Buried in the EKOS analysis — possibly because it is a provocative notion at this juncture — is the tentative proposition that, at this rate, the Conservatives could have a fight on their hands just to hang on to official Opposition in the next election. With a year to go until the campaign, a more topical question is what ails the Conservatives to the point that more and more voters are starting to take their 2015 demise for granted?

And that the Cons are in denial and blaming the wrong leader... 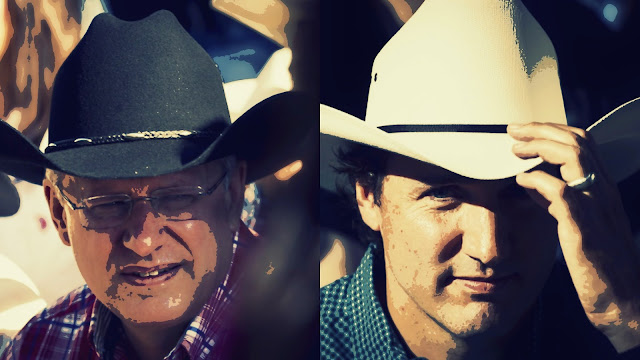 If one is to believe government spin-doctors, the ongoing Liberal recovery is a passing fad, based on the political equivalent of fool’s gold, i.e., Justin Trudeau’s status as a celebrity and its purported fatal attraction on the media.

But the fact is that NDP Leader Thomas Mulcair routinely scores as high or higher in the best prime minister category. In the EKOS poll he beat Trudeau 54 per cent to 49 per cent. Harper, by comparison, scores poorly outside the cohort of core Conservative supporters.

Which if true, is also ironically enough bad news for Tom Mulcair and his NDP... 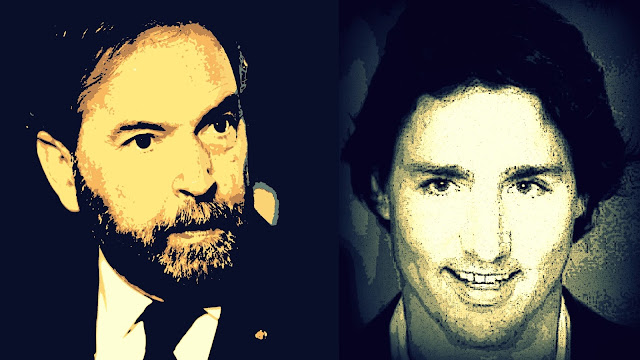 Even as he more than holds his own against Trudeau in the leadership category, Mulcair is so far failing to translate the positive impression he makes on many non-NDP voters into support. And that may be because a plurality of Canadians is shopping for a different, more collegial leadership style and not the more fundamental policy shift they often associate with the New Democrats.

Which as Campbell Clark points out, has the NDP understandably bitter, and many blaming the media for focusing too much of their coverage on Justin Trudeau.

In English Canadian media, there was 69 per cent more coverage of Mr. Trudeau than Mr. Mulcair in the first six months of this year, according to Jean-François Dumas, president of Influence Communications. In Quebec, Mr. Trudeau had a 17-per-cent edge.

The New Democrats see it as bias, even if they understand some of the reasons for it: the family name, the pictures of him a child with his PM father, the good looks and now momentum – editors and producers think people want to see him. One NDP official noted that’s a self-fulfilling prophecy, comparing it to the old Hygrade hot dog slogan: “More people eat them because they’re fresher, and they’re fresher because more people eat them.”

But at least the NDP seem to recognize that part of the problem is that Mulcair has spend too much time in the Commons, and not enough time meeting ordinary people, and getting his message out... 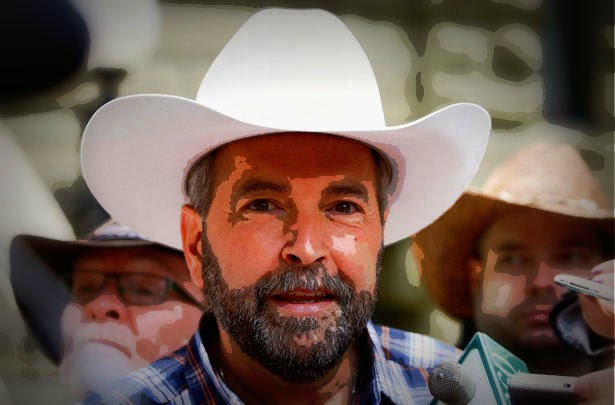 Mr. Mulcair can’t compete on the same field. While he won plaudits for his role as Opposition Leader, his strategists realize that’s not doing them much good any more – he has to go to towns in B.C., Saskatchewan and Ontario, and be seen outside Commons debate.

That’s not entirely new, of course – Mr. Mulcair has travelled. But the party will emphasize it more, because they have to find novel ways to define him soon, outside of the Ottawa bubble, or he risks slipping out of the conversation.

But while that change of style may help Mulcair, if style is the problem it won't help Stephen Harper... 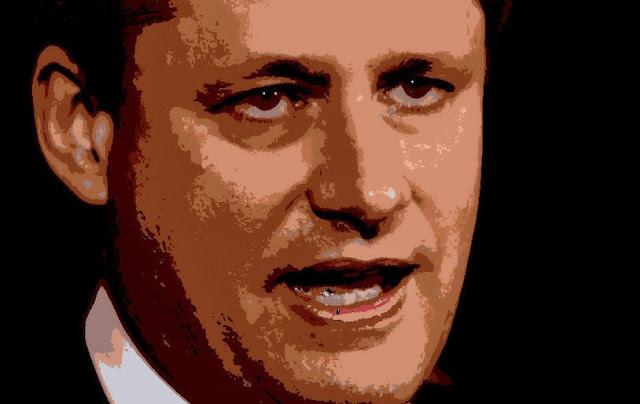 If leadership style rather than core substance is the issue, the Conservative brain trust has a problem on its hands — for the more it puts a take-no-prisoners Harper in the face of voters, the less they see in him the consensual leader that they increasingly seem to crave.

Not if Canadians are signalling that they have just had enough of him, that he's yesterday's leader, And that they now not only can imagine a Canada without him, they actively desire it.

The more obvious question now isn’t whether the Conservatives can repeat its stunning majority triumph of 2011; it may be whether it can even hold onto opposition leader status.

Of course it's just a poll, and the Cons still have a lot of things going for them like a healthy war chest.

But as Warren Kinsella points out if the poll is signalling a real trend, it probably is time the Cons started to panic.

But here’s the thing, and it’s a good place to conclude: what if the polls are right? What if the Conservative trend line is all down, not up? What if the stuff the Con war room used against Messrs. Martin, Dion and Ignatieff just doesn’t work on Trudeau? What about that?

Sometimes, in politics, things truly are as simple as they seem. And that means this: The Conservative Party of Canada, and Stephen Harper, are going to lose. Badly.

And of course, you know what I believe.

When you're hugely unpopular, and you've been around for too long. 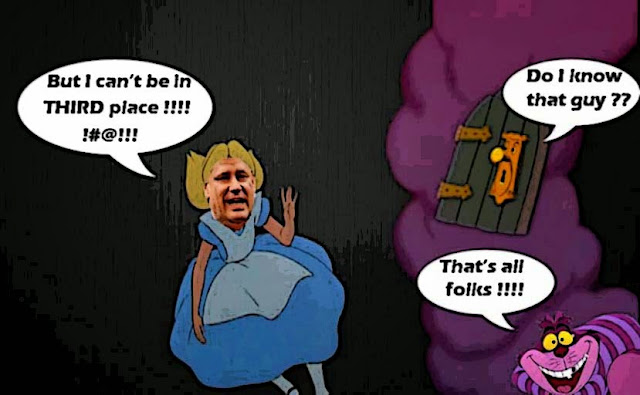 "Harper, by comparison, scores poorly outside the cohort of core Conservative supporters." ... Ah! That core! Deluded, hypocritical, immature scum-sucking losers. They're fine with politicians lying to Parliament; passing off forged documents as respectable sources of information. They're fine with politicians refusing to provide Parliament with basic information before demanding that Parliament vote to spend whatever the government is demanding.

They have no idea how craven and generally revolting they are.

FYI .. here's my comment to Kinsella on the matter

" .. on the advice of medical advisors, who have discovered a benign but serious health issue, Stephen Harper will 'step away' and spend time gaining further treatment in London & Geneva.

Some sort of bizarre prorogue will be implemented.. perhaps the Harper Paramountcy Indeterminate Prorogue.. such that although Parliament will not 'sit' .. a 'steering committee' of The Speaker, the Governor General, Peter MacKay & other likely scoundrels will keep Harper's seat warm.

The next general election will remain in stasis.. until the 'temporary civil emergency' is 'over'

The country named Canada is already a hostage of The Harper Party ..
and the so called Harper Government will continue the affront more directly now
by simply litigating via its thousands of lawyers.. against Canadians, The Charter,
democracy, honesty, decency, accountability and the law of the land.

Whether narcism, greed, deceit, omnipotence, duplicity and a yellow streak can be cured overseas
is a question many many Canadians will soon be pondering ... "

I'm hoping, Simon, that, unlike the polls in BC trumpeting an easy win for the NDP in the last Provincial election, these polls are right...but I don't trust them. We have to be on our guard, complacency is all too easy to fall into...

Harper took a planeload with when, he visited Israel. I think most of us knew, Harper was up to no good. Harper fully encourages Israel to make war on Palestine. It was requested, Canada bring over the Palestinian children to treat them, for their horrific war wounds. Harper point blank refused. Harper's support rally for Israel was disgusting. Harper supports Israel on, the dead children of Palestine? As far as Christy Clark? She fully supports Harper's treachery towards Palestine. Clark too, lied and cheated to be elected. 100,000 jobs for BC and they are where?

Harper deregulated safety standards. Deregulated environment standards. Gutted the Environment Ministry of funds. Permitted the mine Barons to operate, with severe shortages of staff. The mine Barons are just as greedy as, Harper's oil and gas Barons. Jason Kenny out and out blatantly lied regarding, his TFW program. He and Harper bring over foreigners for, the resource Barons to exploit. That too is a safety hazard. Many foreigners, don't know the language well enough and Canadians don't want to work with them. Foreigners have already died in Canada's resource sector.

Harper and Israel are, behaving no better than Hitler. Seems Israel may be charged with war crimes and crimes against humanity. Harper played a huge role and should be tried too.

Now if I have this right, do the polls suggest that with the Liberals in a comfortable lead that I can finally vote for someone other than Trudeau and maybe even return the dippers to loyal opposition without fear of splitting the vote? That would be interesting to see those assholes smiling from the other side of their faces. Could you even imagine that rubber faced Clement getting a slap in the face like that! My god the I'm getting all giddy at the prospect.

Me too! And don't forget the local Vancouver newspaper that put a full page ad the day before election telling all to vote BC Liberal (which is the same as Reform Con). It with good reason I have not purchased the Vancouver Sun nor watched BCTV (now Glowball) for a number of years. They are nothing more than shills for any politican that talks 'right wing' speak. We won't even get into the rampant corruption that permeates this politicians.

hi mizdarlin....heaven forbid that we should be complacent. And you're right these days polls are about as useful as spinning a bottle. Although I used to enjoy that game when i was younger. ;)
But it's the trend that counts, and in that regard the Cons are heading for oblivion...

hi thwap...yes I agree with you they really are a scurvy bunch. But the good news is that the Cons are being forced to expend so much energy holding their base together, and milking them for money, they are turning other Canadians off and the Con tent ain't growing it's shrinking...

hi salamander...yes our friend Thwap doesn't mince his words, and neither do you. Thank goodness. And of course you're both right, the Cons really are a revolting bunch. And yes, I wouldn't be surprised if Harper does step down before the next election. Or if he called an early election to pit the rabble against the judiciary. Because at this stage he really is capable of ANYTHING. But the bottom line is that the longer he stays in power the more people will get sick of him, so this story will have a happy ending...

hi anon...well you would have to ask a tough question that, when with all the rotten things happening in the world I'm so distracted I can hardly tie my shoelaces.;) But what I do know is that the blue tide is receding, and the Cons must be desperate. And at this stage that's good enough...