Stephen Harper Goes After the Media and the Bigot Vote 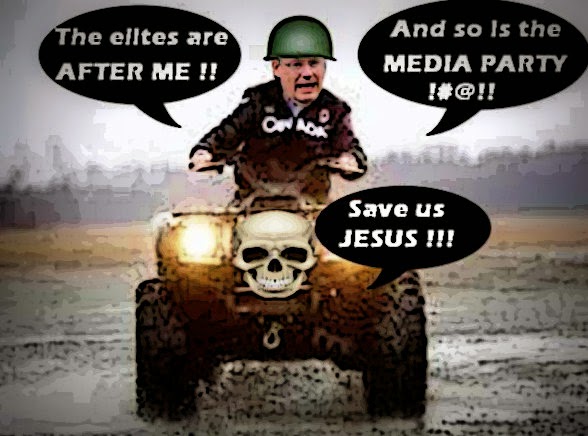 As you know I am increasingly concerned about Stephen Harper's state of mind.

Because it's pretty clear to me that he is showing signs of cracking under the strain of all those bad polls, and is becoming even more aggressive. Or even crazier.

For in just a few days he has managed to attack Justin Trudeau like a bat out of hell.

Rant and rave about how the elitist conspiracy is out to get him.

All but declare war on the Russians.

The Conservative Party of Canada fired off a provocative fundraising appeal to supporters on Tuesday, taking a shot at the “urban media elite” in Ottawa.

On Tuesday — in an email with the subject line “Just disgusting” — the party appealed to its members for $5 donations to help fight what it argued was an Ottawa press corps that is “mobilizing against us.”

Or more specifically his ghastly minions are going after the Star's Heather Mallick for writing this story.

And seething with false outrage, or HYSTERIA.

“Friend, This morning, I picked up a paper to read with my morning coffee. You won’t believe what I found inside. I discovered a 740-word column by the Toronto Star’s Heather Mallick, full of disgusting personal attacks on the Prime Minister,” reads the Conservative fundraising email.

“I won’t go into detail, but it included the word ‘sociopathic.’ Not even trying to hide her bias, Mallick ends her column hoping that when it comes to Conservative majority, ‘next year it will be over.’ This was too far… even for the Liberal cheerleading Toronto Star. We’re not going to stand for disgusting personal attacks.”

Just because she tried to explain why she thinks Justin Trudeau is so much more popular than their Great Leader... 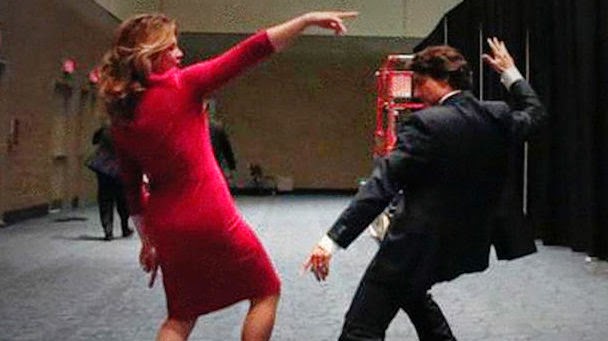 Which must have had the PMO gang howling like hyenas.

And Stephen Harper rolling on the floor biting the carpet.

Or since he was up north, melting his igloo... 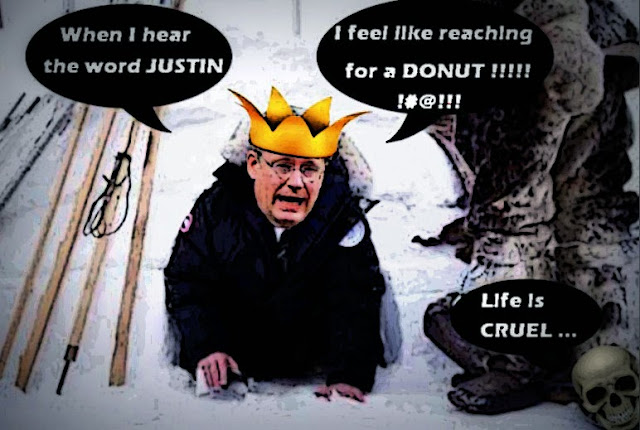 Even though he clearly is a dangerous sociopath, and no decent Canadian can argue with Mallick's conclusion:

At some point, a line was crossed and Harper now emits the kind of toxicity a politician can’t kill. It’s like a house where meth was cooked. That house is done.

It’s like when the journalist Caitlin Moran called British Prime Minister David Cameron “a C-3PO made of ham.” After that, all bets were off.

And for the Cons to accuse others of "disgusting personal attacks" is absolutely hilarious. Or delicious.

Or should I say HAMACIOUS... 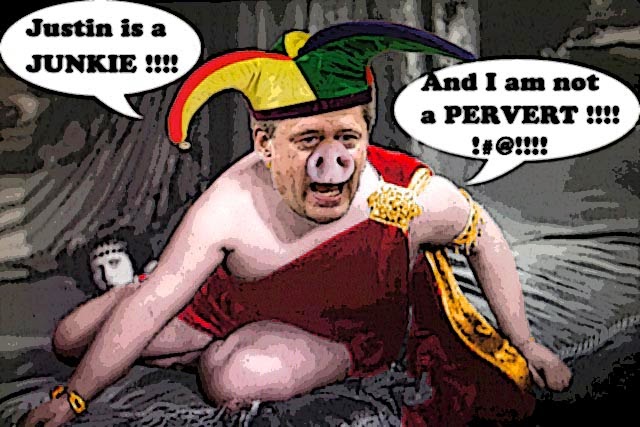 Because that one's pretty porky too eh? Honk. Honk.

But of course it's not funny, not when Stephen Harper is taking his grotesque Cons even further to the right than they have ever been before, into the bowels of tea bagger territory.

Into the Land of Limbaugh and other right-wing American nut bars.

And why? Because he needs to shore-up his rabid base, he craves their grubby dollars, and he will do anything to get them. And I mean ANYTHING.

The federal Conservatives are telling core supporters that "traditional family values" are a party stance, a phrase that so far has not entered the prime minister's public speeches or official Tory documents.

Under a section entitled "I stand with the Conservative Party on the following issues," the members are asked to check off those that apply. "Respecting traditional family values," is one of the options, along with "safe and sensible firearms policies" and "tough-on-crime approach."

But you know what "traditional family values" mean? It's a codeword for misogynists and homophobes.

A dog whistle for those who want women jailed for having abortions, and believe LGBT people are less than human.

Which only shows how low he is prepared to go to try to boost his polls:

Pollster Nik Nanos says the party is likely making the electoral calculation that it should position itself clearly as socially conservative, differentiating itself from progressives Justin Trudeau and Tom Mulcair.

"Probably what they're trying to do is say, even if you're angry with us, we're still closer to the values that you have compared to the other choices," Nanos said of the survey sent to Conservative members.

And how Harper in his final agony is reaching out to the most extreme members of his Reform Party base.

Back to his bigot days... 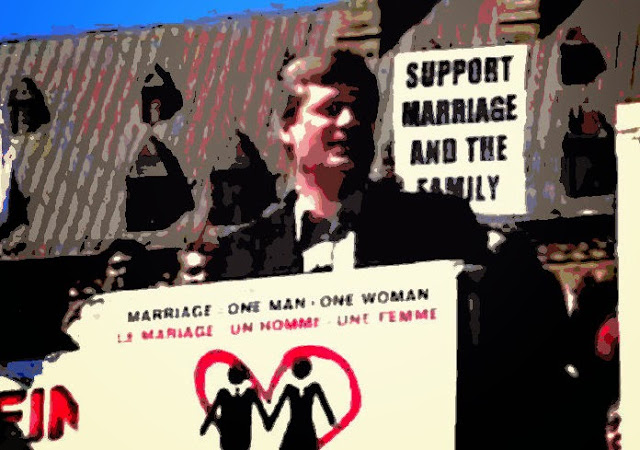 Which makes him even more DANGEROUS.

The fact that he must go to such lengths to hold on to his rabid base, means that he must be desperately afraid of losing them.

That even some of them are abandoning him, as polls show, or not sending him enough money.

And the more tightly he clutches them to his breast, or rides that hog.... 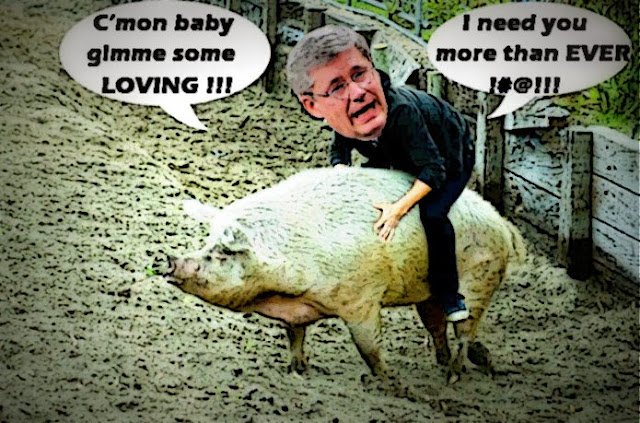 For we WILL use it against him, to degrade him beyond recognition.

So while Heather Mallick is right to call him a monster. Or the Hair that killed Canada...

Something un-good lurks. There’s a heart in my pocket and it isn’t mine. The call is coming from inside the house. I’m being suffocated by a toupée.

She's right about this too:

And then . . . I look at Trudeau dancing with his wife, his ease with his fellow humans, his best wishes for his — and our — children, the feeling that I am back in a world of plausibility, sanity, arts and science, good cheer. I had a bad dream and next year it will be over.

It was a bad dream. It was a living nightmare.

We can joke about "The Hair" but actually the joke is on us.

I never did understand how people did not get disgusted when "The Hair" expensed five "upscale haircuts" to taxpayers at about $2K each haircut for a total cost of about $9460 in the weeks leading up to the G8/20 meeting in Toronto: http://sentineldispatch.blogspot.ca/2011/04/breaking-news-auditor-says-harper.html#.U_3qTP3D99A

And people rant when Duffy expensed his housing/travel claims. Can you blame him after he had seen what his Dear Leader had been expensing to taxpayers?

Surprised to hear that Mallick would write anything negative about Harper, since she has always seemed, until now, such a rabid right-winger...which only goes to prove the point that there is little to chose from between Junior and Great Leader...Justin may be more easy-going now...but it is pre-election time, and it's easy to be casual and friendly when the polls are in your favour...whatever that means...

How is Heather Mallick a "rabid right winger"? Like many journalists and commentators, at times she makes things too much about herself, and she is wry and self-deprecating in her persona as an avowed snob, but in general her commentary is on the left.

I don't see why anyone would choose between the Upper-Class Twit (channelling Monty Python) and the Great Dictator (channelling Chaplin). I'm to the left of the NDP, but I did vote for them (despite their deplorable stance on Israeli aggression, fortunately not shared by my NDP MP). I don't vote for bourgeois parties.

Harper is the worst and most corrupt Canadian PM, in the recorded history of this Nation. Harper is the first Canadian PM ever, to be held in contempt of Parliament. Harper has disgraced this country and Canadians, beyond belief.

I don't have an iota of a clue, how Harper's Ministers and the rest of his cabal can support his dictatorship? Jason Kenny has blatantly lied regarding, his TFW program. There is no shortage of labor in Canada, what-so-ever. Then there was Harper and MacKay's attack on Chief Justice.

Harper has a list of degenerates as long as his arm, to do his underhanded cheating tactics for him. Such as, the robo-call election cheat. That is only the very tip of the ice berg, of what Harper is doing to this country.

hi anon....I've always stayed away from discussing Harper's hair. I'm afraid it could come flying at me and bite me. That's why I always try to put a cardboard crown on him, to try to keep it in its place. Down boy, down !!!! But yes you're right, we have paid through the nose to try to make him look pretty. And it's all so ironic. Never has a leader been so vain, and never so ugly...

hi mizdarlin...Oh I don't think Mallick is a right-winger. Sometimes she's just a little crazy. But then aren't we all. And I have to give her full marks for that column. Her description of Harper's hair alone, had me rolling on the ground. And then of course feeling VERY annoyed that I hadn't thought of it first. ;)
And yes, let's not forget that Canada is NOT a progressive bastion, so we might not get what we want, but it will be definitely better than we had before...

hi lagatta...yes I agree. I find Mallick a little erratic, but her heart is definitely in the right place. And I did think that column was brilliant. As to the choice facing us, I respect your choice to vote for the Marxist Leninist Party of Canada, but I will be voting for the bourgeois candidate who can best defeat the Cons.
However, when The Revolution comes, and they don't believe that I am as far left as you are, I'll be counting on you to bail me out of prison, or save me from a firing squad... ;)

hi anon...yes I don't think there can be any doubt that Harper is the worst Prime Minister in Canadian history. But it's important to bear in mind that providing we work hard enough to get out the vote, his time is almost up, and the nightmare is almost over...

Huh, I'm voting NDP! I love my MP, Alexandre Boulerice. I've never voted for the Marxist-Leninists; far too authoritarian for my tastes. When I said to the left of the NDP, I was referring to Québec solidaire, the only party I actually belong to.

Voting for the "Democrats" is not necessary in Canada; that is the dilemma for leftists down in the US, not here. Despite their vast shortcomings, the NDP is qualitatively different from the Libs (to say nothing of the Cons, of course).

The NDP is taking a very strong stance on the Missing women issue, by the way. I just got a petition in the e-mail from my MP.