Stephen Harper and the Failed Smearing of Justin Trudeau 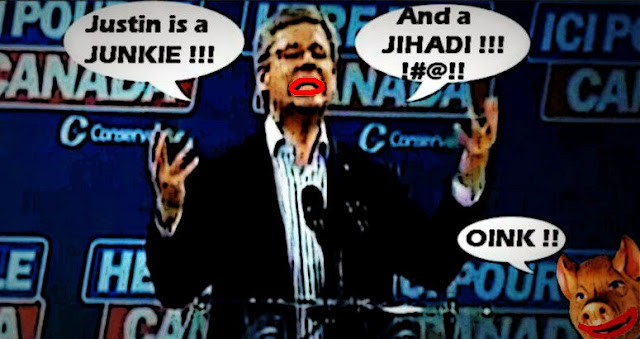 It has been said of Stephen Harper that you can put him in the prettiest places on earth, you can surround him with cute children and/or kittens.

You can use a trowel to apply a ton of mascara. You can give him a shiny fresh coating of lipstick.

But you can't take the beast out of that bully.

For there he was again today trying to smear Justin Trudeau with a sleazy campaign that couldn't have been more orchestrated.

It began with story in the PMO's unofficial propaganda organ, the bottom feeding Sun News

Justin Trudeau is being accused of "intellectual dishonesty" for his visiting a Montreal-area mosque that American government sources say has been an Al-Qaeda recruitment centre.

Was closely followed by a deranged rant from Ezra Levant... 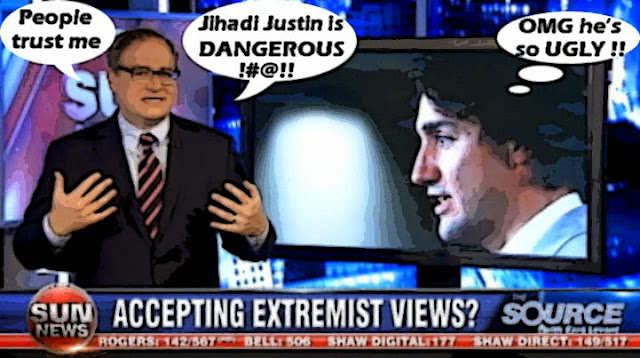 
Until it was time for the hapless stooge Steve Blaney, the so-called Minister of Public Safety, to jump in feet first.

Canada's public safety minister is accusing Liberal Leader Justin Trudeau of supporting terrorists, more than three years after he visited a mosque that was later declared by the U.S. to be one of nine places worldwide where "known al-Qaeda members were recruited, facilitated or trained" more than a decade earlier.

"It is completely unacceptable that Liberal Leader Justin Trudeau would associate with a group that allegedly radicalizes Canadians to join al-Qaeda and engage in acts of unspeakable violent extremism. "Now he is pandering for votes amongst religious extremists in our own communities. It is clear that Justin Trudeau cannot be trusted to keep Canadians safe," Blaney said.

All to try to reinforce the creepy message of this three-month old attack ad...

Even though the ad was a complete bust, like all the others, and the timeline of this latest smear attempt is completely out of whack.

In a telephone interview with CBC News on Wednesday, Deputy Liberal Leader Ralph Goodale said Trudeau has not visited the Al-Sunnah Al-Nabawiah mosque since March 2011 — before classified U.S. intelligence reports naming it were made public in April 2011. The U.S. intelligence reports referred to individuals who had been associated with the mosque more than a decade earlier.

And even though as Jonathan Kay points out, if Sun News knows something CSIS doesn't, maybe they should tell them about this scary threat, and layoff the anti-Muslim hysteria.

If Sun News has information suggesting that al-Sunnah al-Nabawiah mosque remains a hotbed for terrorist recruitment and indoctrination, CSIS no doubt would want to hear about it. Then again, CSIS has been on this beat since 9/11. And thanks to their efforts (as well as whistleblowers within the Islamic community), there has been a wholesale purge of terror-implicated figures within Islamic mosques, charities and community groups all over the Western world, including here in Canada. No doubt, al-Sunnah al-Nabawiah mosque peddles all sorts of dogmatic Muslim theology that most of us don’t like. But if there is any evidence that the place has been connected to terrorism over the last 15 years, I’m yet to see it.

And as I would point out, if Blaney can't explain what he's doing to protect us, and he's the so-called Minister of Public Safety, we've got a problem eh? 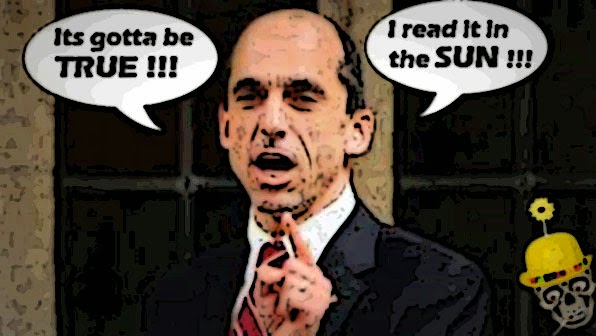 Blaney's office could not specifically say what the Canadian government was doing about a mosque that is allegedly radicalizing Canadians to join al-Qaeda. "I cannot comment on operational matters related to national security."

But then of course it's just another vile smear. An attempt to throw mud at Trudeau and hope that some sticks. When in fact it will probably bounce off Justin like water off a duck's back, and make the Cons look bad. Or desperate.

But what's interesting is that it comes at a time when Stephen Harper may have a Middle East PR problem of his own. Somebody who works with pollsters told me today that Harper's unconditional support of Israel's brutal assault on Gaza is hurting his numbers.

And I wouldn't be surprised if that's true.

Because it's one thing to pander to the Jewish vote, and the Con's rabid Christian Dominionist base, with extravagant photo-ops like that bloated junket to Israel... 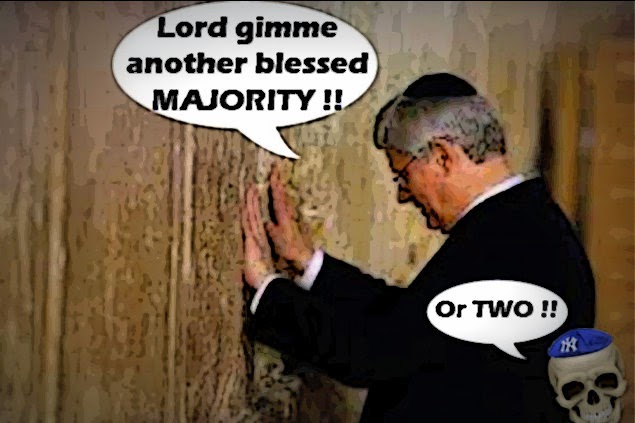 And quite another to seen to be endorsing the wholesale slaughter of children... 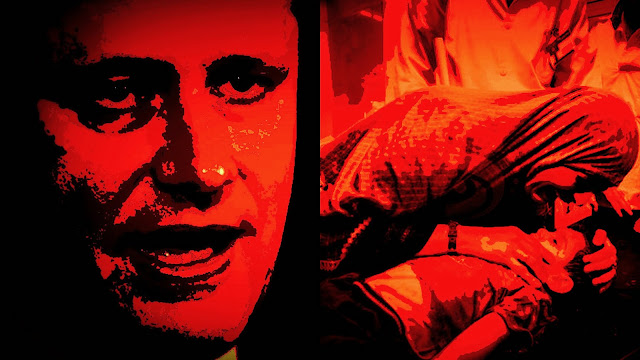 And which as I have pointed out before, not only blows away Harper's carefully cultivated image as a protector and a friend of children.

It also reinforces the widespread belief that he is a hideous bully.

And of course this latest crude attempt to smear Justin Trudeau will only strengthen that negative impression... 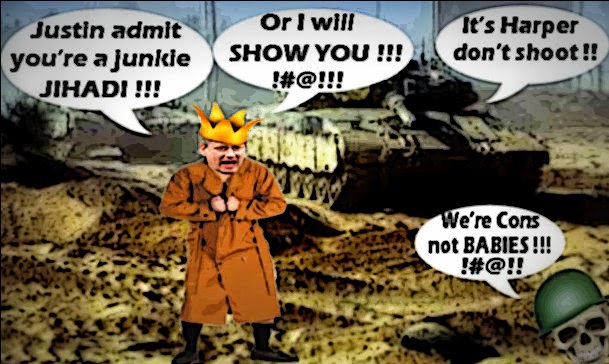 Which is the last thing he needs at a time when he is desperately trying to soften his image.

And shot shat himself in the foot. Again.

His unconditional support of the Netanyahu baby killers is not protecting Canadians,  it's painting giant targets on our backs, and making our lives more dangerous.

And what can and must be said, is that this country will not be safe, or clean, until that sleazy political pervert is finally removed from office...

I heard that Justin's memoirs will be coming out in the fall.
I'm not a Con supporter, but for Justin to come out with his memoirs? It just spells big ego to me and that is always a big red flag. So full of his own self-importance that it just needs to get published.

I weep for Canada.

These kinds of smears might work with the Harperite base in Cornhole, Alberta, but they do give the rest of us Canadians a good laugh. So carry on, Steve, carry on.

We have been weeping for Canada especially since, Harper's so called majority. Harper is of the ninth ring of Dante's Inferno. I believe, that is as low as you can go. Harper should be tried along with Israel for, war crimes and crimes against humanity. Harper is the ring leader, encouraging Israel to make war on Palestine. Israel and Harper are every bit as bad as Hitler was. As Israel has thrown themselves in with Harper? Israel has lost a lot of Canadians respect. Israel has been duped into, doing Harper's underhanded work for him.

Herr Harper attacked Trudeau, the minute he won the Liberal leadership. Harper's own team refused to, send out his hate ads on Trudeau, they were that bad.

It is very hard to believe, how Harper's henchmen can support that monster. Harper has them cowed and they do exactly what Herr Harper dictates, they will do. Every time Harper reverts to his, hate attack ads on Trudeau? He earns nothing other than, more of the deepest contempt.

Anon 7:29 AM I weep for you anon for having been brain washed by the Hareprerites as well as having absolutely no idea what real facts really are. Spew your venom else where like where your kind actually care.

Simon: A suggestion.... in order to distinguish between different "Anonymous" posters, that you insist no one can post as "Anonymous" in the future. But if a person wishes to be anonymous, then have him/her choose a name/alias, and match it to their profile so you know it's coming from the same email address.

Not so much even in Alberta. Don't forget, one of Canada's best mayors, is in Calgary and he is Muslim. Everybody I know in Calgary loves the guy. Na, that religious shit only goes so far,........

They want to label Trudeau a "terrorist" type, they are going to have to do better. By calling him so many names, no one is going to believe them now.

I think it reasonable to conclude then we will not be seeing any Conservatives at any mosques in Canada just in case............

What will be interesting is what Justin and his ghost writers omit from his "autobiography"..... like his failed attempts to be a engineer and a geographer after abandoning his teaching career in BC.

omg... desperation so thick from anonymous and anonymous. Not even Mike from Canmore is voting CON... lolol

All this political stuff is a joke, the problem is anything can be slanted either way because politicians are crooked and their intentions. They are all playing the same game whether it be conservative, liberal etc. the point is this. What do their actions speak, do they stand for honourable things, will they make a benefit to our culture and our society. Everybody in the parliament plays the smear and fear campaign, that's the nature of the beast. It's like expecting something different out of a survivor episode... So the point is this, what is really happening between the lines.