Robin Williams and the Demon Depression 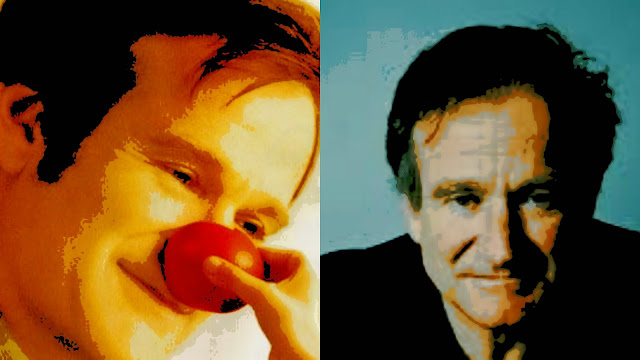 He was such a funny man, he made so many people laugh.

Which only made his sad death even more shocking.

Robin Williams, the versatile actor whose madcap comic style made him one of television and film's biggest stars, was found dead on Monday from an apparent suicide at his home in Northern California. He was 63.

But as the Star's Peter Howell points out, he was a clown with a dark side.

“Reality is just a crutch for people who can’t cope with drugs,” he once said, possibly the most famous of his many classic one-liners. As always with Williams, 63, who was found dead in his California home Monday of an apparent suicide, there was a shard of truth in every joke. A clown with a dark side, he found reality tougher to deal with than he let on.

The Chicago-born comic genius had a quicksilver wit that masked a lifelong battle with depression. He was the epitome of the clown who laughed on the outside but cried on the inside.

And his death should remind us how cruel and how merciless is the demon depression.

That it is everywhere.

The most common disorder reported was a major depressive episode, with eight per cent of full-time members reporting symptoms in the 12 months prior to the survey.

And that as a society we must do so much more to fight it. More to help those suffering, and more to support those who love and care for them.

Because it hurts EVERYONE. 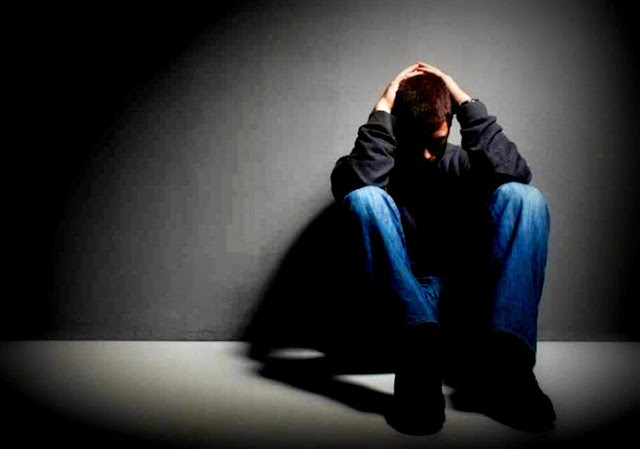 I know, because as I've mentioned before, I recently accompanied a friend with severe depression through the bowels labyrinth of our mental health system. And it was the one of the worst journeys I've ever been on.

Starting with the moment when I realized that there weren't near enough resources or decent facilities to help my friend, not enough doctors or therapists. Discovered that the mentally ill were being marginalized in our own hospitals, treated like second-class patients or citizens. And that shameful stigma, even in the 21st Century, is still a huge problem.

A nightmare journey that left me in such a state of shock and exhaustion, anger, and despair. I honestly wondered at times whether I was going to survive it. Let alone my poor friend.

So when the demon depression kills, like it killed Robin Williams... 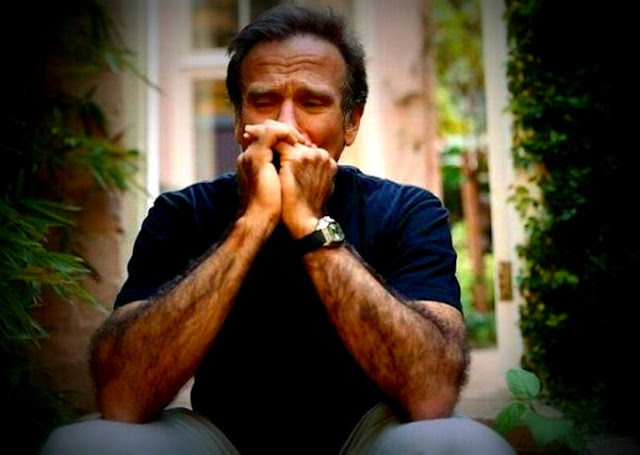 I only hope his tragic death will shine a light on that scourge of humanity, and encourage us to fight it so much better and so much harder. Now in his name too.

Because the demon is so cruel, and it is so sad, because he was such a comic genius...


But strangely enough, it was his performance in a much darker movie, The Dead Poets Society, that left the greatest impression on me.

So when I saw this suggestion for a tribute from the British journalist Johann Hari... 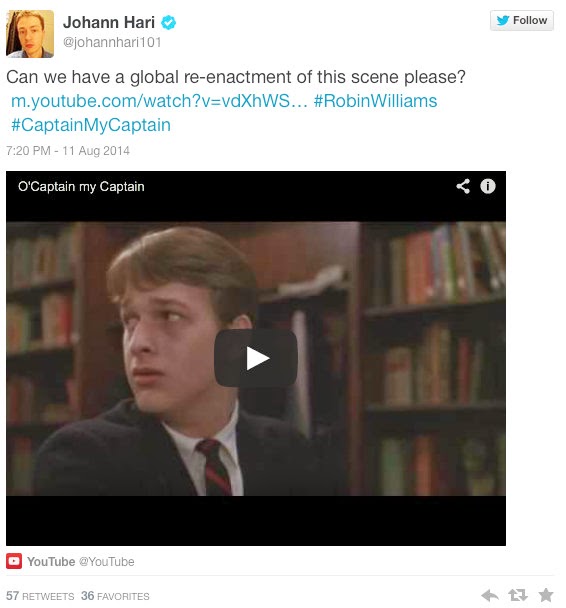 I thought, yes, yes, that would be PERFECT.

Let him play the English teacher John Keating, who used poetry to teach his students to defy convention and stand up for themselves. And told them to call him O'Captain! My Captain! after the famous Walt Whitman poem, when they felt daring.

Only to be fired by the ghastly headmaster, after being unjustly blamed for a suicide, and have his students stand up for him...

O'Captain! My Captain! How soon and so sad the ending.

Thanks for the laughs... 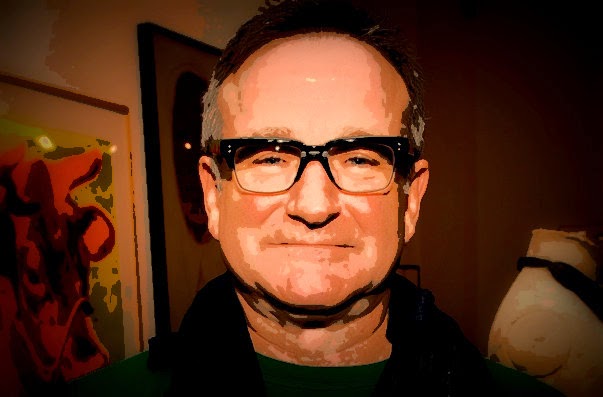 According to one news story, Williams was bipolar and apparently there is a significant risk of suicide for bipolar people.
It is very sad, what a loss.
Good post, Simon.

good post because it deals with the depths of the problems regarding this illness, and that not even a lot of money can assist with the problem. For some suicide is the only "cure" for the illness. Many do not accept that as an "acceptable" cure, but if someone has spent 20 to 40 yrs trying to deal with the despair, depression, substance abuse, with no end in sight, some times it just becomes to much to bear. AS a society we are beginning to discuss assisted suicide and personal suicide as a "proper" ending of terminal physical illnesses. Perhaps it is time to discuss the appropriateness of people ending their lives when despair has and will not end. For some suicide is not a permanent solution to a temporary problem, it is the "only cure". May Robin Williams now have the peace he did not have in life.

hi Cathie...thanks, and yes he was bipolar and of course his depression was apparently aggravated by drug use. I should have mentioned that if only to remind people that mental illness is just another illness like any other, that it can happen to anyone, and those who suffer from it shouldn't be stigmatized.
I also should have reminded any of my readers who are feeling sad today, that my friend and I made it out of the darkness and into the light. Somehow. Depression can be treated and managed, so don't be afraid to ask for help, because it can save your life...

hi e.a.f...I recognize that the pain of depression can be almost unbearable, and it horrifies me to see how much suffering it can cause, and makes me feel so helpless and angry to see how some who suffer from it are treated. But I couldn't never recommend suicide as a way out, because it can be treated. And I make a distinction between those who wish to commit suicide because of depression, and those who want to end their lives to spare themselves from the pain and indignity of a terminal illness. For until that moment arrives, life is precious, and hope springs eternal...

Good post. My mother has been treated for depression since the late 80s (about a decade an a bit ago that diagnosis was changed to bipolar) as a serious clinical depressive, so I have lived with that risk of her killing herself for a long time now. With lots of love and attention we have been able to help her keep herself here but it can be a real grind on those of us around her because of how hard it is on and for her. In the last year we had two really bad runs, so bad we were forced to have her institutionalized in our regional psych hospital for several weeks each time, and while thankfully she is better at the moment these were very rough times for us, especially my father and myself as her primary support mechanisms.

You see, while I am disabled to the point I cannot hold a steady job I still retain the ability to drive to an extent, and one of the main things I do for her is take her out on drives a couple of times a week to wherever she wants to go, indeed I am doing so later today and I expect she will want to talk about Williams because she has a fixation of both death and on celebrities, especially ones with depression like herself. I am truly sorry we have lost one of the greats like Williams, and I agree with you that his performance in DSP was outstanding and remarkable even in an impressive career such as his. I saw that in the theatres when it came out, and I left the place in tears it was so powerful an impact on me. So I join you on that metaphorical table and say loudly...

Robin Williams never was very funny. He was manic at best, and just annoying at worst. Always over-acting. Mrs Doubtfire was probably his best comic role -- thank jeebus that he couldn't adlib and wreck that role.

Hi Scotian...I'm sorry to hear that your mum has had to suffer from depression, and that you have had to live with the fear of her killing herself, as I fear for the life of my friend. And fear stories about suicide lest t give him any ideas. But I am moved by your story of how you take your mum out for drives, and I do the same for my friend (on bikes). I try to go to a different place every time, so it's always a voyage of discovery, and I find it really works. When this Harper regime is finally defeated, I'm going to dedicate myself among other things to exposing the shortcomings of our mental health system. But one day at a time Oh Captain! My Captain !

hi anon...well that's nice. Good timing.You're not a film critic I hope. Because if you are I fear you have no future. Robin Williams may be an acquired taste, there is nothing wrong with that. But nobody can deny that he was a comic genius....

The point is not whether Robin Williams' acting or roles are to our taste. The news gave me a horrible sinking feeling, thinking that it would all be in vain, that it won't make it easier for depressed people to access the health system or get the help they need.

A good friend of mine (who happens to be gay) is going through a bad depression now and has had suicidal thoughts. Moreover, he is in a type of non-profit housing and unfortunately, the administrators are acting like little potentates; now they are trying to force tenants to get rid of their pets (no large dogs; either cats or small dogs). My friend absolutely needs his cat (no neighbours have complained about this cat; it is just a random application of a hitherto unenforced rule).

I also remember the shock of seeing the distinguished general Roméo Dallaire reduced to the stereotyped figure of the drunken itinerant on a park bench; would this push society towards action on PTSD? Alas, looking at the figures about PTSD and other manifestations of poor mental health in the military, it doesn't seem to have been the case.