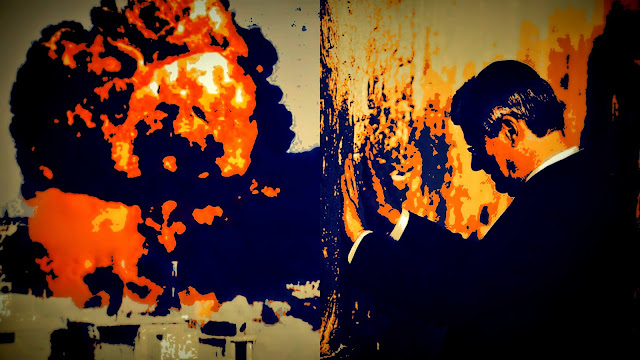 It's an enduring mystery, a strange thing. Why does Stephen Harper seem to like Israel more than he likes Canada?

What is it about that country that moves him so much, and makes his cold dead eyes  moisten with emotion?

Why is he encouraging Israel's savage assault on Gaza, at a time when most of the world is calling for restraint?

The Ottawa Citizen's Mark Kennedy thinks he knows the answer. It's because Harper is a very moral leader.

What motivates him? It’s about the simplicity of right and wrong, of good and evil. And it’s also about the complexity of the need to take the right side — Israeli democracy versus Islamist terror — in a geopolitical conflict that could some day have impact on Canada.

Morality and self-protection. They are the principles at the core of the Harper Doctrine.

Which of course is laughable. When the Harper Doctrine is a joke. Harper is the most immoral leader in Canadian history, and a shameless stooge of the Netanyahu settler regime.

Who would do or say anything to pander to the ethnic vote... 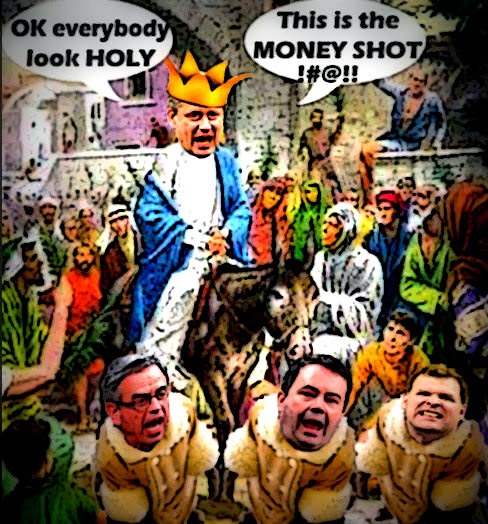 And of course there's nothing moral about his support for Netanyahu's war.

Nothing moral about all those dead children... 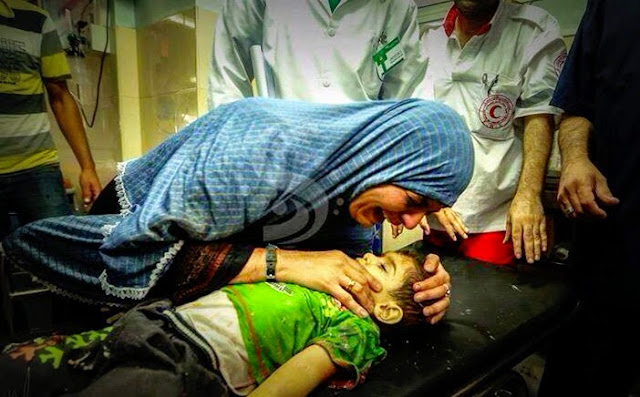 Buried in the rubble or stored in ice cream freezers.

Gaza's morgues are overflowing to such an extent that medics are being forced to pack babies' bodies into ice cream freezers, shocking pictures have revealed.

The United Nations has warned that Gaza's medical facilities are 'on the verge of collapse' with buildings left in ruins and half of medics unable to get to work.

Palestinians say corpses now litter the streets and casualties fill the blood-stained emergency room floors of Gaza's hospitals, a third of which have been damaged in the fighting.

And nothing moral about the way entire neighbourhoods are being obliterated. 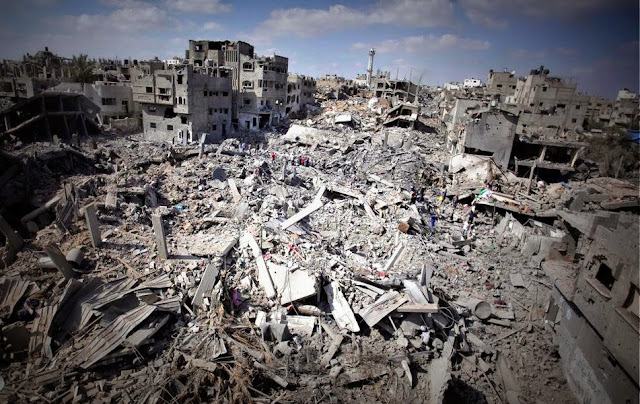 Or wiped off the map.

But then that's not the only thing Mark Kennedy gets wrong.

He is also too quick to dismiss the influence of religion on Harper's unhinged  foreign policy... 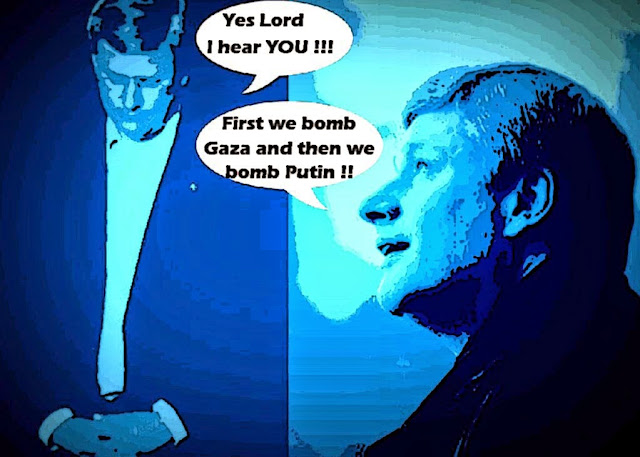 Even though the Harper Doctrine is eerily similar to the doctrine of his Christian and Mission Alliance Church.

Apart from “relentless” proselytizing – something which Stephen Harper never does, knowing it would be political suicide – the C&MA lays out a worldview based on a belief in the “inerrant” nature of the Bible. The Bible is not seen as metaphorical or symbolic in any way; rather it is judged to contain within it the literal truth about everything to do with the world.

That instructs its followers to believe that Armageddon is imminent, and that only Israel can save them from the Antichrist.

The designated opponent of the Antichrist, at the battle of Armageddon, will be Israel, according to many believers. In this context, it is easier to understand Stephen Harper’s unwavering, even at times baffling devotion to support of Israel, against the flow of world affairs, and in contradistinction to the positions of our closest allies. He is acting as if he sees the fate of Israel as the touchstone for the fate of the earth and human civilization.

And this quote in Kennedy's story only proves how much religion influences Harper's thinking.

In contemporary debates that influence the fate of the Jewish homeland, unfortunately, there are those who reject the language of good and evil. They say that the situation is not black and white, that we mustn’t choose sides.”

For only religious fanatics see the world in black or white, or in terms of good and evil. And they don't make good diplomats, or good Prime Ministers.

But they are dangerous. Bad for Canada and the world.

And the last thing the poor people of Gaza need... 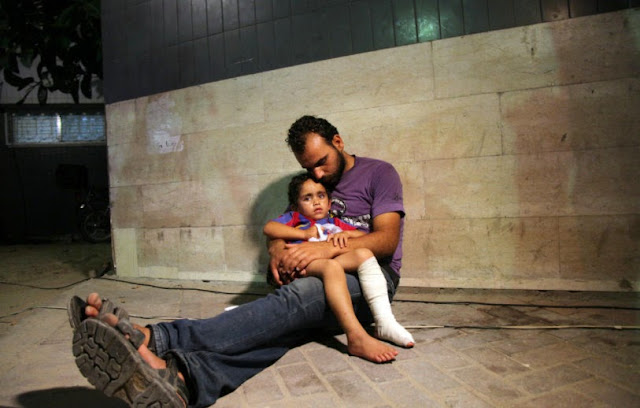 Which is why I really can't wait for the day when we can defeat Great Messiah Leader, and his crazy gang of religious fanatics.

And send them all back to their Promised Land... 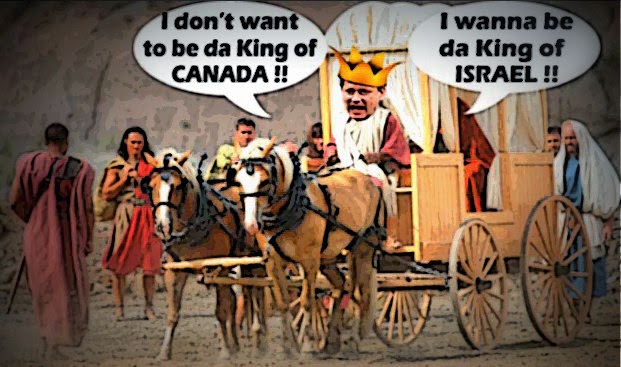 I don't even have words to address what I feel right now.
Nobody but a complete fucking idiot would take as "literal" a book (yes, the "bible") that was authored/edited by over 1,000 people (including a deranged english king) and actually believe it has the answers to all the world's scenarios, especially today's world.
How fucking dumb can you get? I watch some the specials where they interview these religious christofascist fanatics and the absolute level of stupidity in them is mind boggling. If they only could see how infantile and deranged their perceptions really are (I especially like the one where they are now saying the earth is only 6,000 years old and jesus rode a dinosaur) that fly in the face of every proven bit of scientific evidence that there is and will defend their right to hold onto that worthless ignorance and defend it to the death (of somebody else's kids of course).
I dumped the bullshit that is now the r.c.c. a long time ago because of the hypocricy that is so prevalent in its rulers and these new so-called "christian" cults make them look like angels, relatively speaking.
It's like the americans always say . . . "science will fly you to the moon - religion will fly you into the side of a building".

Thank you for your insight! I agree!

Isn't Harper connected with Na*i intellectuals and Christian Fundamentalists? I know I read about that somewhere? Harper is a paranoid dictator, pretty hard to miss that. Harper's security bill has doubled.

Harper is the most rotten to the core leader, since Hitler. And, Israel and Harper are just as bad as Hitler. The slaughter of the Palestinian children, is absolutely evil. I am really hoping, Israel and Harper will be tried for, war crimes and crimes against humanity. All countries supporting Israel should be charged.

Most of us felt a lot of sorrow for the Jewish people. I have completely changed my mind. They let monster Harper, encourage them to slaughter the people of Palestine. Even the children playing on the beach.

You forgot to mention that Harper has allies in Gaza and they are demonstrating against Hamas launching rockets into Israel and the Gazan population suffers when the Israelis retaliate with deadly force.

The Hamas terrorists are executing Gazans who are protesting the war and in a brutal fashion. Hamas are mad dogs who should be destroyed utterly. Read about it here:

The only rockets being launched into israel are by mossad agents acting as agent provocateurs.
That way, israel can have the excuse of "defending itself" while committing genocide.

There are so many things harper and his herd do which are immoral and inconsistent with what I understand the Bible was trying to teach people. Christians are those who believe the New Testament is all about how Jesus and his followers think people should deal with each other, in a kind and loving manner. From what I remember of my sunday school lessons, they were about giving to charity. Not hurting others. Providing for others when they didn't have enough to get by, to help those who couldn't help themselves and all of that good stuff harper and his herd go out of their way to not do. It is beyond me how any one could say harper was moral. Its one of the things harper lacks: morals.

Saying some one who views the world in black and white or good and bad, is a moral person is wrong. It is a person who has limited intellect.

Sometimes I'd like to say let the beggettin begin except for the slaughter of innocents. Another curious thing is that the Palestinians are more Semitic than the Isrealis. Many of the British soldiers at Suez would have rather been sent to punish Isreal for the king David hotel terorist attack on peace keepers. But there he is again Abraham the god of revenge

There is a documentary online regarding the London subway bombings. The evidence is clear that Mossad in cohorts with English officials set up the whole thing, recruiting two well meaning arab young men to play in what they thought would be a video to show to their peers the errors of fanaticism and terrorism... unfortunately for the two men they missed the subway train ( the one that blew up) so the men that supposedly where responsible for blowing a bomb in London where alive and well in the train behind the one that blew up. They where executed the moment they left the station likely by mossad. look it up I kid you not. There where also reports that quite a few of the "suicide bombers" in Israel/Palestine where actually delivery man/woman carrying their jobs without actually knowing that they where carrying bombs at the behest of the mossad. Again to create casus belis for the continuation of the genocide in Palestine. After all the only way for someone in Gaza to have a job is if a Israeli employs them. I know that it sounds unreal. I wish it was, but Mossad are a world in its own (read "by way of deception we make war", great book, eye opener no wonder Israel tried to ban it. http://en.wikipedia.org/wiki/By_Way_of_Deception )

The funny thing is the people you consider Jewish are not even semitic. They are Askhenazi, a Turkish tribe, they "converted" to Judaism supposedly in the 12th century. Now 3 questions, how do you convert to something that is based on genealogy (Judaism was the faith of the children of Abraham, that was the whole point! Turks are not children of Abraham, they are not Semitic, Arabs are.)... and 2nd, where are the Semitic jews? (watch The Ringworm Children for a hint to the 2nd)

AshkeNazi's have no legal claim to Judaea. AshkeNazis = Aryans