The Latest Gaza Horror and Israel's War on the Media 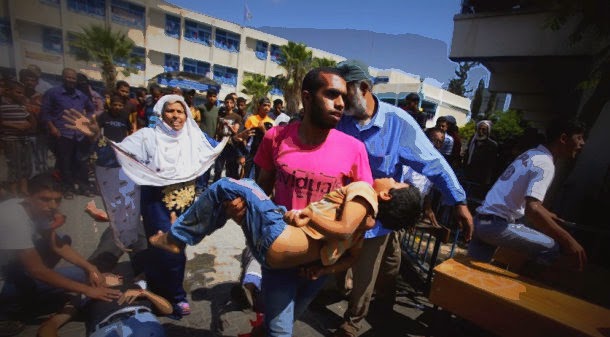 A deadly attack on a school in the city of Rafah in the south of Gaza has been denounced as a "moral outrage" and "criminal act" by the UN secretary general, Ban Ki-moon.

At least seven people were killed and dozens more wounded after a projectile struck a street outside the school gateson Sunday morning. The school was sheltering more than 3,000 people displaced by fighting in the area.

Or see the pictures of its ghastly aftermath... 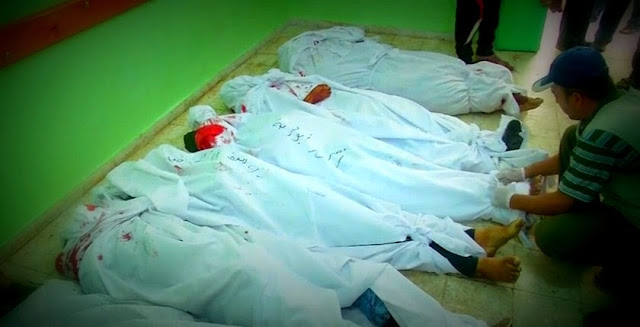 I give thanks for the brave journalists risking their lives to bring us the story, including the CBC's Paul Hunter. 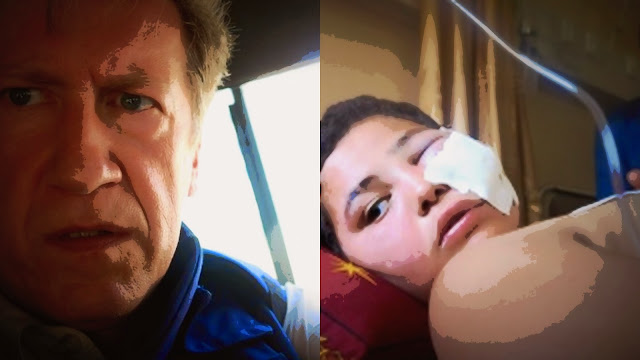 On our first day, we went to Gaza's largest hospital, the al-Shifa. The injured arrive by ambulance, car and motorcycle. Inside, al-Shifa was a tsunami of misery. I didn't see a single empty bed. A grief-stricken family crowded around a woman in her 20s who had taken shrapnel in the head and was in a coma. She died a few days later.

I saw a young man unconscious and breathing with a respirator. But the mechanical respirator wasn't working, so his was a dirty tube coming out of his mouth attached to a large plastic bottle being squeezed and released by a young medical attendant.

For not only does his report give us a shattering image of the horrifying toll on civilians. And the terrible conditions in Gaza's hospitals.

It also reminds us of the dangers journalists face.

And of all those who have paid the ultimate price, including the latest victim, the Palestinian photojournalist Ramy Ryan... 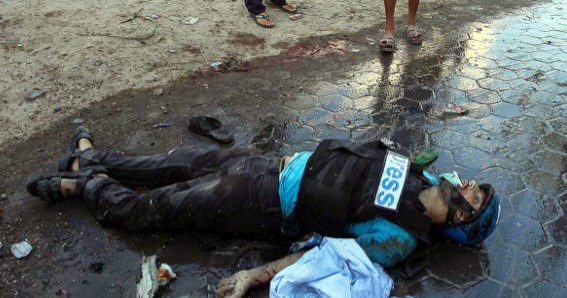 Killed along with so many others in this indiscriminate attack.

The Palestine News Network reported that the Ministry of Information in Gaza "confirmed" 62 violations against Palestinian journalists by Israeli forces including the bombing of two Press cars, 13 houses belonging to journalists and 14 bombs being dropped on media institutions. Nine deaths and thirteen injuries have been recorded.

As does this report by the British Channel 4 reporter Paul Mason...

And all I can say after all of that unbelievable horror, is no wonder the brutish Netanyahu regime kills journalists so casually.

No wonder our depraved Con regime hates the CBC and the media so much... 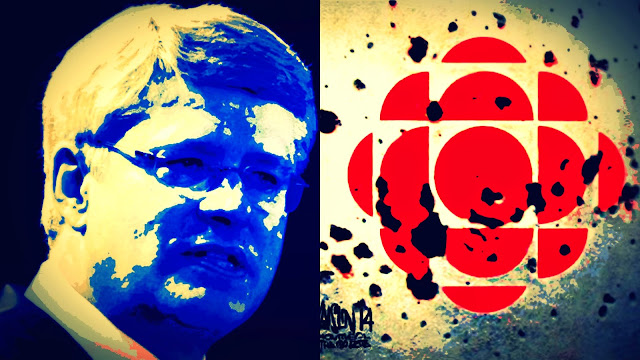 For without them those hapless stooges could get away with MURDER.

And of course, as one who celebrates healers not killers, and dreams of the day when Palestinians and Israelis can live in peace together, and of the day when the Cons are defeated.

All I can add is this:

And in the name of humanity stop this senseless slaughter... 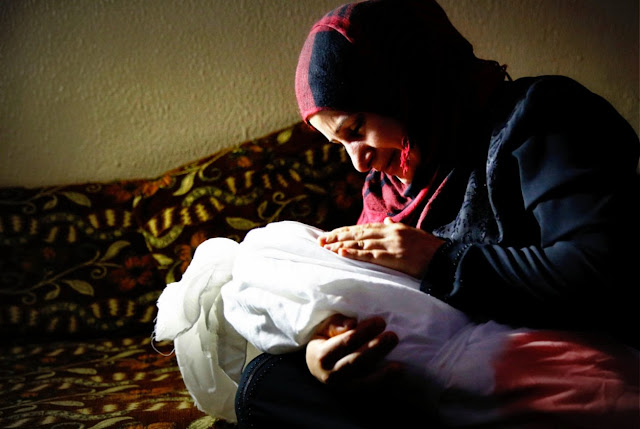 Hamas are mad dogs and are now killing Gazans to increase the dead body count all in order to gain global support, particularly from the corrupted UN.

Yes!!! Hamas is now mass murdering Gazans and executing Gazans who are calling for peace with Israel.

a lot of people deserve better. However, the majority voted for Stevie and Bennie and now we all get to live with it or die because of it. The Palestinians have Hamas in their midst and they will not be easy to remove. It is why it is important for every body to go out and vote and not leave it to the few.

True and loyal Canadians in the RoC (excluding Quebec) will most certainly NOT vote for another PM from greedy corrupt separatist nation of Quebec!!!

Sad. You appear to have lost your mind. What a pathetic creature you are.

Oh, Anonymous 6:30 a.m. please go back to sleep. YOu obviously got up on the wrong side of the bed and need your sleep. Making statements such as this simply demonstrates how out of touch you are with the politicians in this country and what they stand for.

If you are talking about greedy corrupt politicians from quebec I would refer you to the book by Stevie Cameron, "On the Take, The Mulroney Years". She is the only person who Mulroney didn't try to even sue. Harper is just another version of Mulroney except Harper and his herd are much more venile. and poisonous. Mulroney and his mob were simply greedy.

A separatist nation of Quebec? get a grip there kid. the last time I checked, Quebec was a province of Canada and not going anywhere. If you would check our brief history you will have noted each referendum to leave Canada has failed, in Quebec. If you check into Canadian history there was Upper and Lower Canada. One was French speaking, the other English. Of course history didn't say much about the Cree speaking, Salish speaking, etc., the languages of the First Nations, but hey, for the invaders, it was the French and the English and it went from there and the French and the English are still here, along with a multitude of other nationalities.

if you are worried about the "Quebec separatists" don't be. You ought to come to B.C. and have a look at what harper and his herd has rout upon us here. Welcome to the newest province of Communist China. There are parts of Vancouver and Richmond where you can no longer find anything written on store fronts in English or in French. Yes, that's right, no English, no French, no First Nations languages, only Mandarin. In Richmond, it has become so bad, if emergency services have to be called, if you don't know the exact road you are on, there is nothing for you to indicate where you are if you do not read Mandarin. Even Mandarin speaking immigrants have expressed concern about the lack of English on signs. We have Chinese corporations shipping raw logs straight to China and not paying royalities to the provincial government. (check the local Terrace, B.C. newspaper). when the Vancouver school board wanted to provide washrooms for transgendered Canadian students, the mandarin, mainland Chinese said they didn't want it. It wasn't consistent with their values. yes, and that wasn't Canadian values.

I'd rather have a P.M. from Quebec who believes in Canada than some idiot from the northern foundation. Even if Mulcair and Trudea put Quebec first I'd vote for them because they don't but the Red Army of China and the Communist Government of China and their corporations first. harper and his herd have been. that little free trade agreement harper and his herd wants to sign with China, well it turns over a lot of Canadian laws to their control. No P.M. from Quebec would ever do that. If for no other reason, they love their country and or their province. harper and his herd only love themselves and their warped sense of entitlement.

All those Mandarin Chinese in BC will be voting for the Harper Conservatives in 10/15... because Justin "Commie" Trudeau "admires" the Chinese Communist regime for their ability to "turn on a dime".

Oh, all those Ukrainian-Canadians will be turning out in droves to vote for Harper too because of his principled stance against Russian aggression against Ukraine. So will all the Slavic Canadians with their homelands threatened by Communist China.

Now the question is will Jewish Canadians reject their Liberals and show up to vote for the Harper Conservatives and for Israel? I wonder.....

Of course, Justin has got the pro-pot vote in his pocket... if they aren't too stoned to show up to vote...lol