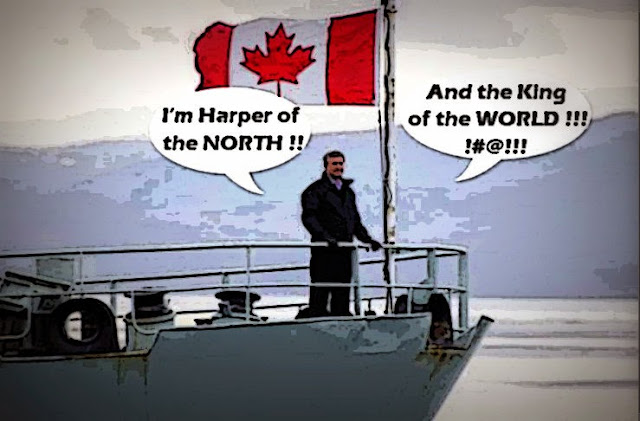 Well there he was today in the Northwest Passage, sailing majestically along and trying to pose as a great explorer, Harper of the True North Strong and Free.

The push to find the remains of the Franklin expedition is not simply a matter of historical interest, Prime Minister Stephen Harper said Sunday — it’s about the pre-Canadian claim to sovereignty in the Arctic.

Sending a strong subtle message to the Russians to back off, while indulging his depraved taste for the macabre.

“You’ve heard what I’ve said before about that, eh? That one day we’re going to come around the bend, and there’s going to be the ship, and Franklin’s skeleton slumped over the helm. We’re going to find it.”

And his creepy obsession with British colonialism, Big Oil, and no doubt cannibalism.

While also posing as a friend of scientists, and waxing lyrically over all that ice...

.@LaureenHarper & I travelled by zodiac through the North West Passage. The icebergs were absolutely breathtaking. pic.twitter.com/KessRhqwX5
— Stephen Harper (@pmharper) August 25, 2014


After having muzzled the scientists who tried to warn us it's melting fast.

But of course, this extravagant tax payer funded photo-op, this northern farce, has nothing to do with Canadian sovereignty, or the search for the Franklin Expedition.

It's all about Stephen Harper's desperate search for VOTES.

And sadly for him, far from the Great Explorer Leader image he's trying to project in that absurdly staged photo, he looks more like Leonardo DiCaprio in the movie Titanic

Who by the way he really really HATES.

And after that ridiculous performance today.

I understand that feeling is mutual...... 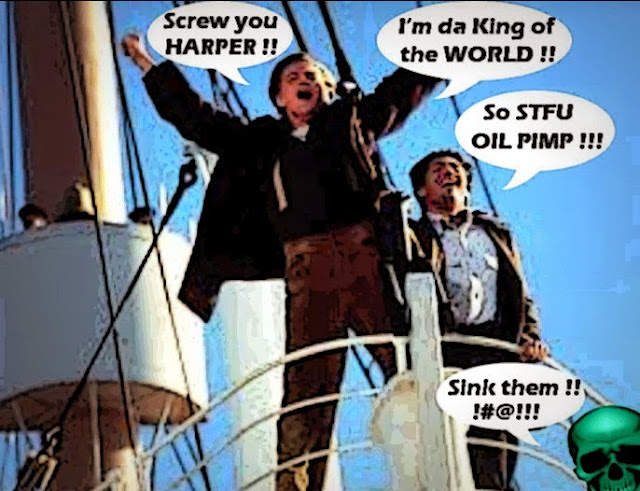 But then, if Harpo loses a few pounds and has some major cosmetic surgery, or puts on TONS of make up, and gets a personality transplant, maybe that IS the role for him.

Considering the way his popularity keeps hitting one iceberg.

Federal politicians won’t be hitting the hustings until well into next year, but Justin Trudeau and the Liberals could be en route to upsetting Stephen Harper and the Conservatives. A new Ipsos Reid poll for Global News shows the Liberals would have the support of 38 per cent of decided voters compared to 31 per cent for the Conservatives.

Considering how many Con rats are abandoning ship.

And considering how desperate he must be, with only about three months to try to boost his polls, before he must think about retiring. Or Jason Kenney and others start trying to push him overboard.

And he finally gets to embrace Franklin's skeleton, slumped over the helm, at the bottom of history's ocean.

Golly. I think I'm going to enjoy this Con disaster movie even more than I enjoyed  DiCaprio's Titanic eh?

It'll be just as exciting, but three ten times funnier.

And it will have a happier ending... 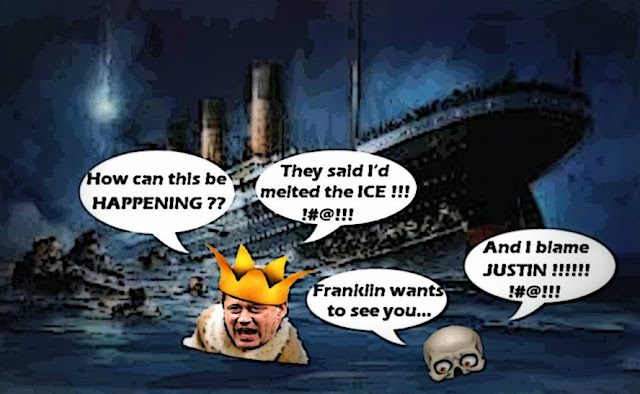 Personally I think that we should be dumping all the United States nuclear waste in the high artic. The ice is melting anyway so what the hell! Lets speed up the process. The ice should stay melted for ....oh ...about 20,0000 years or so. The nuclear waste would be like a "high tech" road salt !
Gosh I'm smart!
Think of the tourism ! Two headed polar bears eating cute baby seals ! I'm there!
As for Mr. Harper. We should build a huge statue of his head made out of cheese the size of the Statue of Liberty. At the North Pole of course. We could surround it with deadly radioactive isotopes to keep pesky graffiti "artists" away. It still probably wont keep Bruce Cockburn or David Suzuki from trying , but hey!
Its worth a try right? right?
God I'm brilliant, even though I hate CBC tv.

stevie has raised the "issue" of the Russians, now twice. I think he thinks he found the election issue which he hopes will keep him in office. With raising the spectre of the pesky ruskies coming through the artic to invade Canada, only warrior steve can save Canada. that love and peace guy Trudeau just couldn't lead an army and that Mulcair, well he'd welcome those red ruskies to take over Canada, yes, I do think stevie is on his way with his next caimpaign, watch the red menace........of course that doesn't include those communist Chinese, they make money for stevie and his friends, so they are welcome to the "friendly" corporate take over.